Meet the People Who Are Preserving Miami's Black History 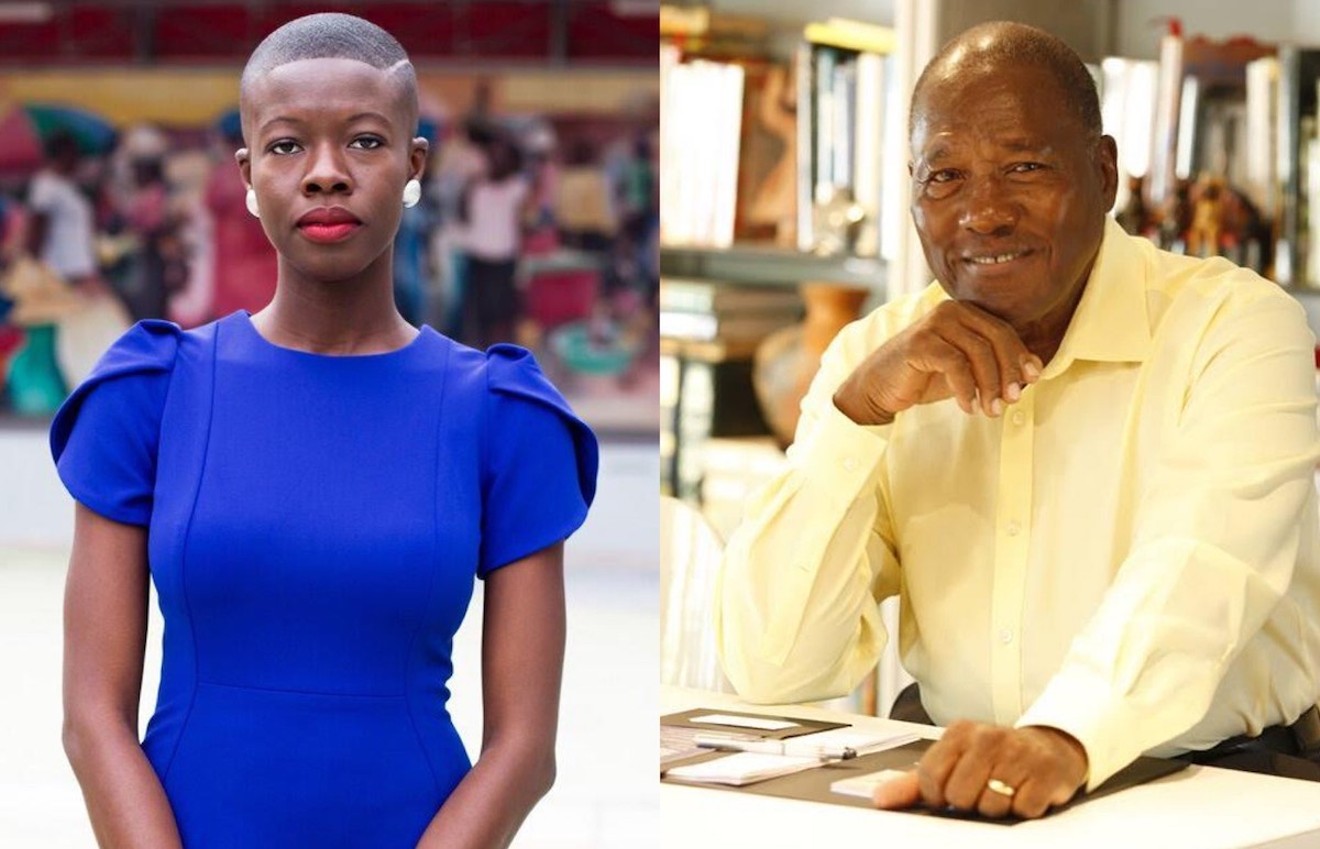 Nadege Green (left) runs the @BlackMiamiDade Instagram account. Marvin Dunn (right) published Black Miami in the Twentieth Century in 1997. Photos courtesy of Nadege Green, Marvin Dunn
When most people think of Miami, they conjure images of South Beach nightclubs, bikini models, and swaying palms. But over the years, local journalist Nadege Green has compiled a growing archive of distinct Miami photographs, news clippings, and audio recordings that challenges these stereotypes and reveals narratives that often aren't taught in school or printed on glossy tourism brochures: those that concern themselves with Black perspectives, memories, and life in Miami-Dade.

Black-and-white photography may seem like a trendy artistic filter. But for Green, it's the medium through which she uncovers the stories of Black Miami and shares them with the public via her Instagram account, Black Miami-Dade, which debuted in February of 2019. It's an emerging, digital storytelling and history platform that resists the erasure of Miami's Black history. It's become Green's passion project.

"Working as a journalist for over ten years, I’d always dig into archives, old newspapers, and once I go down the rabbit hole I go deep," Green admits. "Even since I was a kid."

With more than 8,700 followers, her Black Miami-Dade Instagram account showcases important historical moments and the Black people who helped shape Miami. Some of these images had been sitting in dusty, crowded bins and file cabinets for years, just waiting to be uncovered and preserved. A picture might be worth a thousand words, and the photographs from Green's archives are truly a portal into the past.

A child of Haitian immigrants and former farmworkers, Green was born and raised in Miami-Dade. Most children imagine libraries with their tall walls of books and the elderly librarian giving someone the ol' "Shhh."

But Green was different.

For her, libraries became a haven with inky treasures of knowledge, a place where she could think critically about the history she was taught in school and the history she found digging in the old archives. Green’s librarian at Miami’s Little River Branch Libary was a Black woman, who created and fostered this space for learning.

"It was mostly African-American and Haitian kids at that branch, and every day was Black History Month with her," Green says. "She pointed us to books that were written by Black authors. She always made sure to make us feel seen, even if we weren’t in the books that were on the shelves. That was instrumental to my interest in Black Miami."

Green works as a researcher, audio producer, writer, and community archivist in Miami. Her work centers on the lived experiences of Black people in South Florida. She has reported for NPR, WLRN, and radio programs including The World and Marketplace. Her work has received numerous awards, from the Florida Association of Broadcast Journalists, the National Association of Black Journalists, and, for her story, Planning Funerals for Children Lost to Gun Violence, a regional Edward R. Murrow Award.

Her practice and approach to storytelling are rooted in history and first-person narratives that explore and connect issues surrounding race, culture, climate justice, health inequities, poverty, and displacement. She is a frequent lecturer in academic and community settings, where she speaks about disparities in Miami-Dade, community storytelling, local history, and race.

"With Black Miami-Dade, I wanted to make something that was more accessible," Green says. "I wanted to have a place to nerd out about history where you don’t need a special email to access it, you don’t have to apply to a special program, but just go on Instagram and there it is, a place to make it accessible and understandable with a photo and a quick caption."

Scrolling through Black Miami-Dade, it's evident that Florida was just as racist as the other states in the Deep South. Miami was no exception.

"Bombings in Overtown, threats of lynchings, being hung trying to vote, Jim Crow, kids trying to go to school and getting spit on were all real realities in Miami," Green says. "This project forces us to look at the history. And it’s not just about highlighting Black pain, because Black joy was also present."

"It’s not just about highlighting Black pain because Black joy was also present."

Black Miami-Dade is a testament to the importance of legacy, documenting the day-to-day lives of communities and holding on to history. For example, there's a photo of Rosa Parks getting her hair done in a Miami beauty salon in 1986, photos of Black performers, including James Brown, at the Sir John Hotel in Overtown, and Muhammad Ali sparring in front of his Brownsville home in 1964. There are powerful images from the Arthur McDuffie uprisings that followed the acquittal of four Metro-Dade Police officers for his beating death in 1979. There's the story of Joseph Caleb, who worked as a construction laborer making $1.50 an hour and became a powerful Black union leader before he was murdered in 1972. (There's a building named after him in Liberty City.)

"It’s work and a page that shows up for the community," Green says. "In the community, we all have something to give, and I’m researching this stuff anyway, so why not share it with the community? Whether good or bad, this information exists."

Green says family members occasionally find their relatives' stories highlighted on the page. They also send her photographs and mementos to add to her archive.

"Sometimes someone will go on there and say, 'That’s my grandfather,' 'That’s my great-grandmother,'" she says. "They’ll even send me things. It’s not necessarily in a book or in a museum, but the history is in our homes."

A mother of two sons, Green says her children inspired her to create coloring-book pages that would contain educational aspects about Black Miami history. She's also planning to launch a Black Miami-Dade website, with downloadable content, printable pages, and additional accessible content for educators and parents.

"We could have a whole institute of Black Miami history," she says. "We all have these snapshots of memories and experiences and I’m just happy to uplift that through research, through contributions, and through offerings. Black Miami-Dade is a love letter back to Miami-Dade."

A former naval officer, Marvin Dunn is an emeritus professor in the psychology department at Florida International University. His family moved to Miami when he was 11 years old. Back then, Miami was still a segregated city.

Like Green, Dunn works to preserve Black Miami history. He has published articles on race and ethnic relations. He spent a decade researching his book, Black Miami in the Twentieth Century, published in 1997.

"What inspired me to write my book was that there was no written record of our presence here," Dunn tells New Times. "Where would they go to access this information? The problem may be the absence of content."

Dunn is developing lesson plans about Black history to be incorporated into Miami-Dade County Public Schools' social studies program. It's important to him that the legacy of telling Black stories continues, especially in Miami.

"I’m so glad this young woman is coming along and doing this work," Dunn says of Green. "I’ve been waiting for someone to come in and say, 'I’m the next generation of Black historians in Miami-Dade County. I’m going to take what you’ve done and move it forward.'"

"I’ve been waiting for someone to come in and say, 'I’m the next generation of Black historians in Miami-Dade County."

With the accessibility of the internet, Green is trying to inspire others in the community to take up the fight to find, tell, and preserve Black Miami narratives.

"I’ve learned so much about myself, history, and Black Miami-Dade through all this," Green says. "There’s a thirst for this information, and I love the idea of having an army of storytellers. Whether someone is a dancer, photographer, filmmaker, educator, parent, camp counselor, I want to arm them with Black Miami history and be a service for my community."
KEEP MIAMI NEW TIMES FREE... Since we started Miami New Times, it has been defined as the free, independent voice of Miami, and we'd like to keep it that way. With local media under siege, it's more important than ever for us to rally support behind funding our local journalism. You can help by participating in our "I Support" program, allowing us to keep offering readers access to our incisive coverage of local news, food and culture with no paywalls.
Make a one-time donation today for as little as $1.