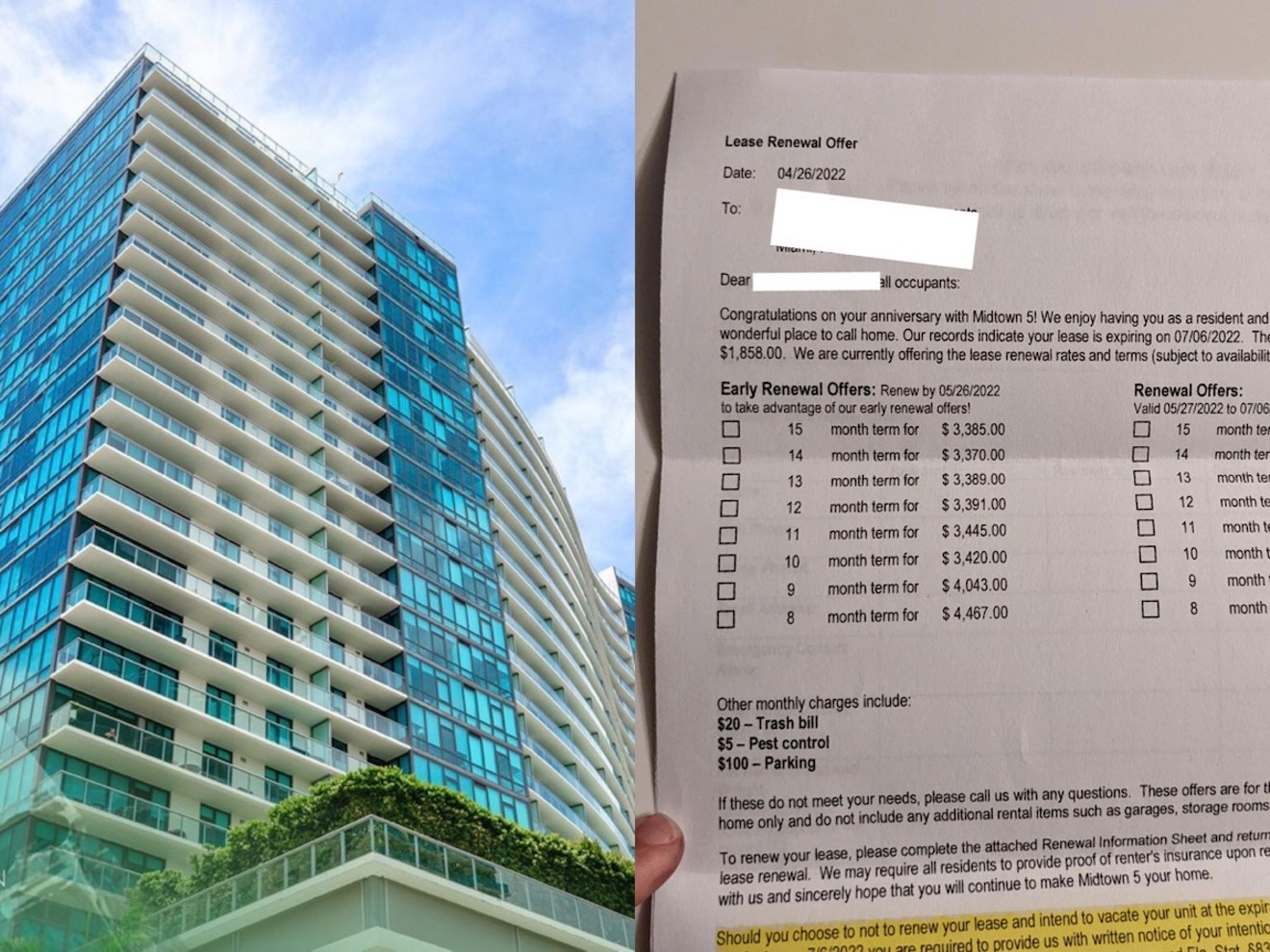 A Midtown Five tenant reported an 80 percent rent hike. Management now says it was an error. Screenshot via @livemidtownfive Instagram/Screenshot via Reddit
Update May 4: At 1 p.m., Reddit user elpapeldelacasa, who first posted about the rent hike, commented that the building "lowered the rent increase from 82% to 50% (how merciful /s) So around $2,800. The way I see it, they are testing the market to see how much they can squeeze out of you. I will post a more detailed breakdown later."

Miamians have seen it all: Rising sea levels, falling iguanas, drug lords, corrupt public officials — you name it, we've had it.

But a sudden 80 percent rent increase, even amid the city's increasingly dire housing affordability crisis? That'd be a first.

So this past weekend, when a tenant at the posh Midtown Five apartments shared a photo on the popular r/Miami subreddit showing a lease renewal letter that indicated a whopping 82 percent rent hike for a one-bedroom, one-bathroom apartment — from $1,858 to $3,855 at a minimum — the post went viral. The April 26 letter notes that the tenants' lease ends in July and lists more than a dozen renewal offers up to $4,600.

"I think there is a happy medium so landlords can still maintain and have a good cap rate on their investment," the poster replied to a commenter, "but 82% is predatory."

A Midtown Five spokesperson responded via email to New Times' request for comment, blaming "a clerical error" in the resident's letter that has since been corrected.

Error or no, the post popped up as rental prices are surging to "insane" levels across the nation, with no end in sight. According to an April report from the online rental platform Zumper, Miami is now the third-priciest U.S. city for renters, with the median monthly rental rate for a one-bedroom unit pegged at $2,630 and a two-bedroom unit going for roughly $3,550.

The tenant's Reddit post has garnered nearly 800 comments, with many users noting the absurdity of the letter.

"They aren't raising your rent, they are kicking you out," reads one reply.

"You, my friend, are getting gentrified. Only tech bros and NY finance dudes allowed in Miami's 'luxury' apts," another responded.

"And Crypto bros," added a third.

It remains to be seen what the tenant's actual renewal offer letter looks like. But Midtown Five's own website indicates that an apartment like the one where the tenant said they live — a one-bedroom, one-bathroom, 758-square-foot unit — is currently going for at least $3,294. That's only about $100 cheaper than the least expensive renewal offer ($3,385) listed in the purportedly erroneous viral letter.

You might be wondering: Is it legal for a landlord to raise the rent by that much?

The answer, thanks to Florida's lack of rent-control laws, is yes indeed. A landlord can legally jack up rent by as much as they want, as long as they give the tenant a heads-up. As of last month, Miami-Dade County landlords are required to notify tenants at least two months in advance of a rent hike that will exceed 5 percent.
KEEP MIAMI NEW TIMES FREE... Since we started Miami New Times, it has been defined as the free, independent voice of Miami, and we'd like to keep it that way. With local media under siege, it's more important than ever for us to rally support behind funding our local journalism. You can help by participating in our "I Support" program, allowing us to keep offering readers access to our incisive coverage of local news, food and culture with no paywalls.
Make a one-time donation today for as little as $1.