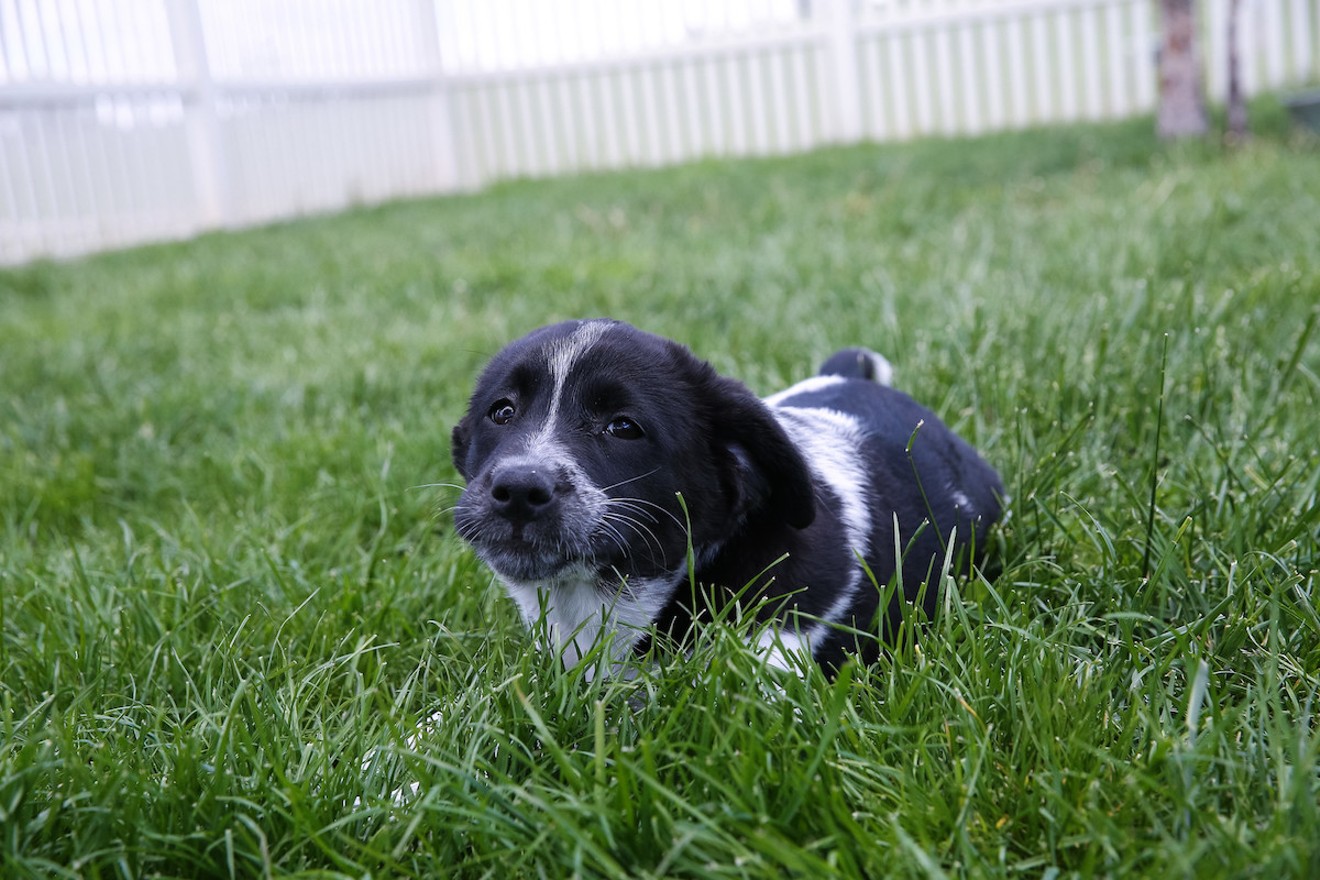 Many residents who find stray or lost dogs on South Florida's streets don't know what to do now that most shelters and rescues are at full capacity. Photo by Mindy Haas Kuhlmann/Flickr
On Christmas Eve, Lucy Rosario picked up a gray-and-white pit bull she found wandering the streets in her Miami neighborhood. She feared it would be hit by a car. When she arrived home, she snapped photos of the dog — whom she named Lola — and posted them on Facebook, Instagram, and Nextdoor. She contacted animal rescues and walked for miles around the neighborhood asking passersby if anyone recognized Lola. No one did.

With two dogs of her own and another she'd been fostering, Rosario knew she couldn't keep Lola. After several days, she brought the dog to Miami-Dade Animal Services in Doral. But when she arrived at the no-kill shelter, a line of people with dogs was being turned away. Eventually, Lola, too, was rejected.

"They were the denying everyone that was in the line," Rosario tells New Times. "It resulted in one person tying [a dog] up to the fence and trying to leave." 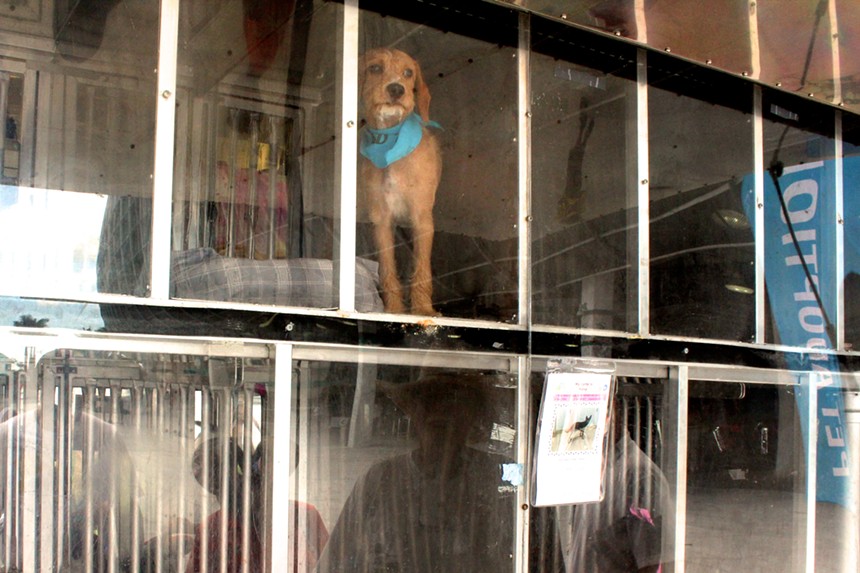 The county's shelter saw its population peak in early December, says Kathleen Labrada, assistant director of Miami-Dade Animal Services.
Jesse Scott
The early days of the pandemic saw a growing demand for pets, but shelters across the nation are now at full capacity, reporting a lack of funding and staffing. In Miami-Dade, stray pet arrivals were expected to rise nearly 18 percent to 32,400 in 2021, according to figures from animal services' 2022 budget. The shelter's population peaked in early December and is still "very full" with cats and dogs, reports Kathleen Labrada, assistant director of Miami-Dade Animal Services.

"The shelter experienced a capacity issue, where the number of dogs coming in exceeded the number of housing units available," Labrada tells New Times. "So we started looking at creative ways and best practices that other large shelters across the country have implemented related to managed admission."

According to the shelter's website, it takes in close to 30,000 animals each year, "regardless of age, breed, medical condition or temperament." But now employees are reserving space for animals in need, such as those that are in perceived danger, injured, abused, or neglected, Labrada says.

For the past few weeks, Jamie Robinson, founder of the nonprofit Jamie's Rescue, has fielded daily calls and texts from people like Rosario who have found stray or lost dogs on South Florida's streets and don't know what to do because most shelters and rescues are at full capacity.

She says several low-cost spay and neuter clinics have closed down in recent years or were temporarily shuttered during the pandemic. As a result, dogs have been reproducing at a rate the county can't handle.

"The situation in Miami Dade County, in my opinion, is one of the worst in the country," Robinson tells New Times. "It's really, really, really bad right now."

A few weeks ago, Robinson found a stray pit bull tied up near her home and tried bringing it to the shelter, only to be told there was no room there. She has heard anecdotally of animal-services employees telling residents to abandon the animals on the streets.

Rosario says that's what happened when she brought in Lola.

"I was like, 'What am I supposed to do?' And they're like, 'Well, you have to go around the neighborhood and see if you can find the family. And I told them that I did that. I told them I did everything possible," Rosario says. "They were like, 'OK, well, just put it back where you found it, and hopefully it'll go back home.'"
click to enlarge 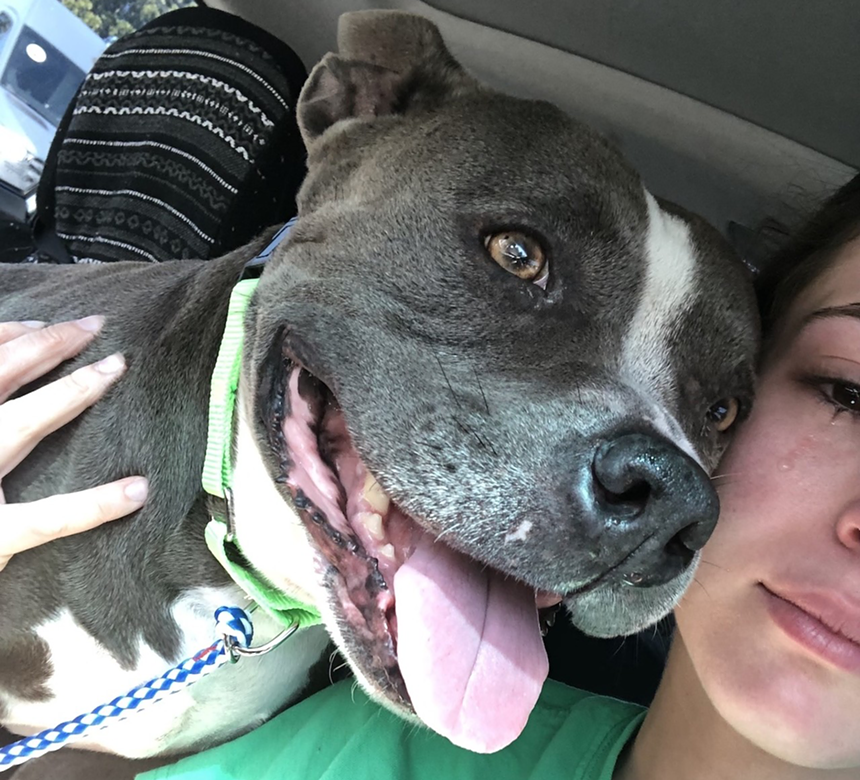 Lucy and Lola in the car leaving the Miami-Dade animal shelter.
Courtesy of Lucy Rosario
Labrada confirms that the shelter has instructed people who find stray animals on the streets to leave them in the area where they discovered them "as long as it's safe." She says that most of Miami's stray animals are simply lost dogs, citing research that shows 70 percent of strays were found within one mile of their home.

While she understands that well-meaning people like Rosario want to help the animals, she doesn't believe taking them to a shelter is always the best solution.

"By picking an animal up and holding it or bringing it to a shelter, the intentions are good but it's not the best way to help the pet," Labrada explains. "So if they're left in the area that they're familiar with, the likelihood is they'll go home."

Rosario says she left the shelter in tears.

"How am I gonna just put it back in the middle of the street? I'm not gonna do that," she says. "I was sobbing because I didn't know where to take this dog."

After reaching out to a handful of rescue groups in South Florida, Rosario found one that agreed to take in Lola. But she knows many other dogs aren't as lucky, and she worries about the fate of the other strays in Miami-Dade.

"I'm thankful that since I know rescues, one rescue was willing to help me, although it was hard," Rosario says. "But any other person wouldn't have gotten the help."

[Editor's note: After this story was published, Miami-Dade Animal Services clarified their intake policy, citing research that indicates 83 percent of people who find strays locate the owner within three days: "Miami-Dade Animal Services encourages finders of healthy stray dogs to assist our community by helping to reunite them with their families. The best way to help a pet home is to walk the pet around the location found and speak to residents of the area who may know where the owner lives. However, if finders are unable to help the pet find its way home or if the pet was found in an unsafe area such as a busy street or if the pet appears to be suffering, they may bring the pet to the Animal Services Receiving Office from 10 a.m. to 6 p.m. Monday through Friday, and 10 a.m. to 4 p.m. Saturday and Sunday."]
KEEP MIAMI NEW TIMES FREE... Since we started Miami New Times, it has been defined as the free, independent voice of Miami, and we'd like to keep it that way. With local media under siege, it's more important than ever for us to rally support behind funding our local journalism. You can help by participating in our "I Support" program, allowing us to keep offering readers access to our incisive coverage of local news, food and culture with no paywalls.
Make a one-time donation today for as little as $1.