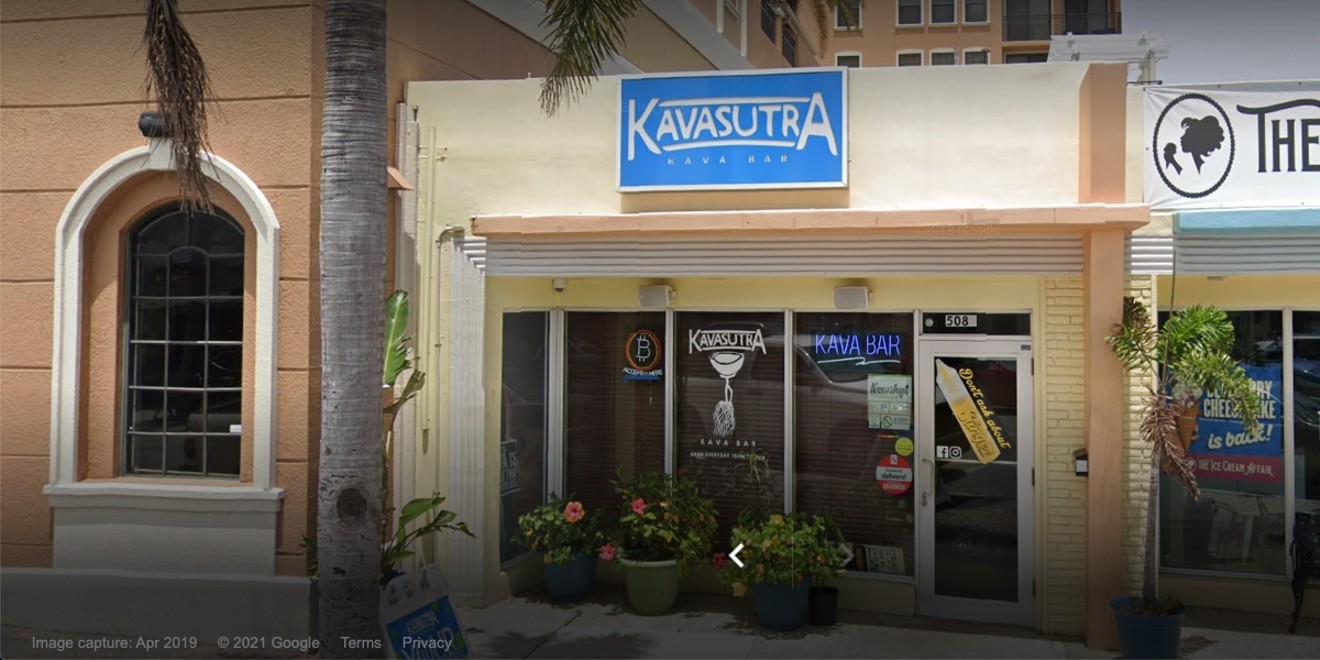 Kavasutra has several locations in South Florida. Screenshot via Google Maps
Kavasutra, a South Florida-based chain of kava bars with a penchant for offensive social-media posts, is under fire after a racist email from one of the brand's owners made the rounds on social media.

In a leaked email Kavasutra owner Dylan Harrison sent to a real estate broker on March 4, Harrison used a racial slur while haggling over the price of a retail space he was considering leasing at the Hypoluxo Center strip mall in Lake Worth.

"As I'm sure you already know, this is a ghetto Haitian nigger plaza. It has all the hallmarks of poverty," Harrison wrote.

He went on to say that a Kavasutra location would "bring enormous traffic of English speaking people" to the plaza and demanded a reduced rental rate for the space. 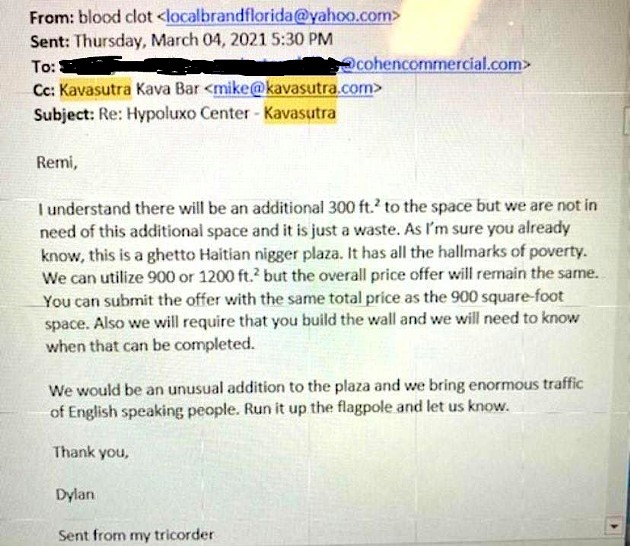 An email from the owner of Kavasutra Kava Bar to a real estate broker, referring to the Hypoluxo Center strip mall in Lake Worth as a "ghetto Haitian n***er plaza."
Screenshot courtesy of Tevin Jackson
The email address used to contact the broker, [email protected], does not include Harrison's name, but the sender identified himself as "Dylan" at the end of the message.

Harrison was previously registered as the president of a Florida company called The Local Brand Inc. until 2018, when the title was transferred to Ronald Van Tassell III, a known associate of Harrison's. Kavasutra vice president Michael Klein, who is listed as the registered agent for all Kavasutra locations with the Florida Division of Corporations, was also copied on the email.

New Times was able to independently verify the legitimacy of the email and that it came from Harrison.

No one responded to an email sent to [email protected], and New Times was unable to find a working phone number for Harrison.

Reached by phone this week, Klein said he did not remember the email in question.

"That doesn't sound like anything we'd say," Klein said, before declining to comment further and hanging up.

Tevin Jackson, a longtime customer of Kavasutra's Fort Lauderdale location, shared a screenshot of the email on social media this week. Jackson said he stopped patronizing the business after seeing multiple offensive posts from the company. He says after posting online about Kavasutra, a friend sent him the screenshot of Harrison's email, which a former employee had provided to the friend.

On Kavasutra's Instagram page, which an employee previously told New Times is run by Harrison, the company regularly posts controversial and often insensitive material, as well as misinformation about COVID-19 and vaccinations.

In March, the company drew heat for a post saying it would ban teachers who refused to teach in person and another that used a transphobic dog whistle to insult transgender women. Kavasutra has also posted explicitly racist content, including an advertisement for a "Cultural Appropriation Friday" event with a Mexican "cholo"-themed costume party. 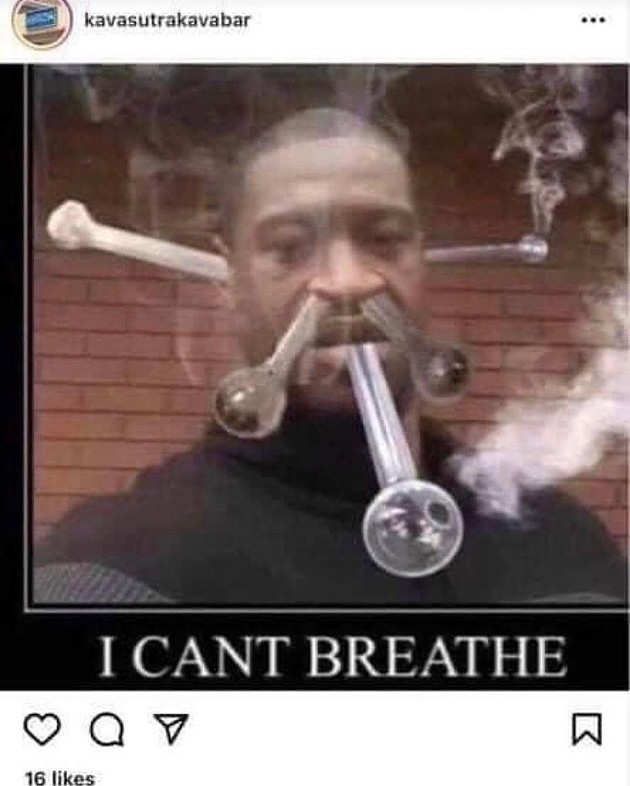 A post from Kavasutra's Instagram page on the anniversary of George Floyd's death. The post was taken down and replaced with another image of Floyd.
Screenshot from Kavasutra Instagram
A current Kavasutra employee, who asked New Times not to identify them by name, says it's typical for company leadership to use hot-button topics to gain attention online, often in an objectionable manner.

"The owner likes to jump on every controversial topic everywhere," the employee tells New Times. "They never do anything that surprises me anymore. Every time I think they did something a step too far, they do something worse."

After seeing Kavasutra's images of Floyd and other offensive posts, Tevin Jackson, who is Black, says he finished patronizing the establishment and no longer feels right maintaining relationships with Kavasutra employees.

"They don't deserve my money or any money from people of color," Jackson tells New Times. "Before the George Floyd post, I thought it was OK to keep in touch with employees, but after that, I don't see that it's OK for me to have any type of relationship with anyone involved there."

Jackson says he has been vocal on social media about Kavasutra's owners, despite backlash from some employees who asked him why he was "talking shit." Jackson shared the email about the Lake Worth retail space on his Facebook and Instagram pages to back up his assertions that Kavasutra's owners are racist.

"I want people to see it. I want people to realize these aren't good people — they're supporting bad people," Jackson says. "They're so comfortable with their ignorance that they're willing to include it in communications with a real estate broker."

Per the Florida Division of Corporations, Kavasutra is currently led by Klein and Van Tassell, the latter a childhood friend of Harrison's, according to the Palm Beach Post. An employee tells New Times that Harrison is still the owner of the Kavasutra brand.

Harrison was listed as the company's registered agent on annual reports until May 2013, when Kavasutra filed an amended annual report naming Van Tassell as the company's registered agent. At the time, Harrison was in the middle of resolving a federal criminal case. After being charged in July 2012 on a felony charge of conspiracy to defraud the U.S. for selling synthetic marijuana, he was sentenced in August 2013 to a year and a day in federal prison.

Harrison currently has an open case in Palm Beach County on a felony charge of criminal mischief for allegedly vandalizing a man's car after the man reportedly had sex with Harrison's wife, according to a police report from the Boynton Beach Police Department. Harrison was arrested in February 2020 and posted bond. He has pleaded not guilty.

Jackson, the former customer, says he wants people to know that Kavasutra does not speak for the broader kava scene, although it is one of the nation's largest kava brands, with locations in Florida, Arizona, New York, and Colorado.

The nascent industry, which sells a South Pacific drink known as kava as an alternative to alcohol, is known for its communal and inclusive nature.

"Kavasutra does not represent the kava community, and they need to go," Jackson says.
KEEP MIAMI NEW TIMES FREE... Since we started Miami New Times, it has been defined as the free, independent voice of Miami, and we'd like to keep it that way. With local media under siege, it's more important than ever for us to rally support behind funding our local journalism. You can help by participating in our "I Support" program, allowing us to keep offering readers access to our incisive coverage of local news, food and culture with no paywalls.
Make a one-time donation today for as little as $1.