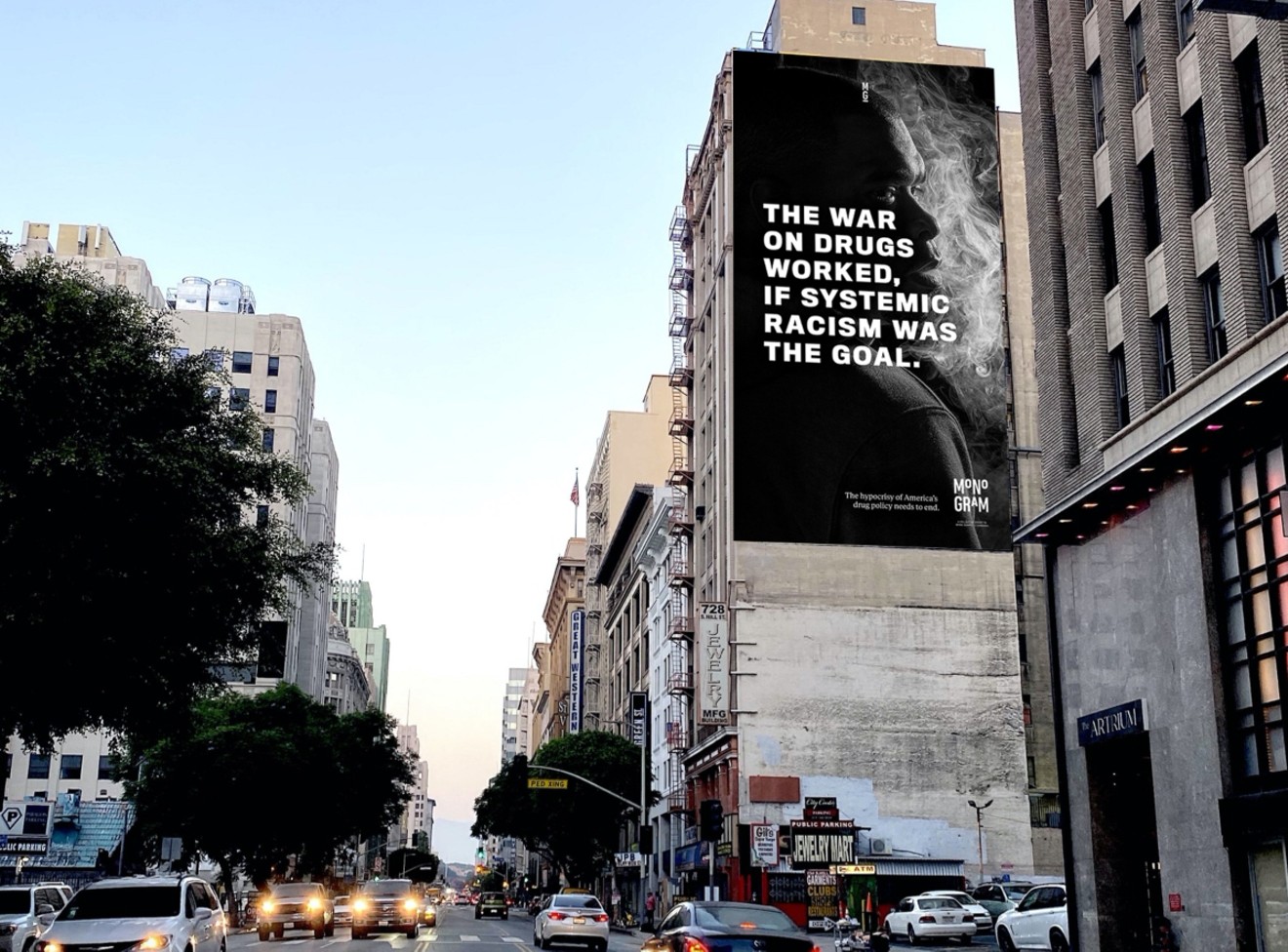 The signs include portraits of people who have been arrested for cannabis-related offenses. Photo courtesy of Monogram
Hip-hop artist turned cannabis entrepreneur Jay-Z has launched a national awareness campaign to highlight the political hypocrisy surrounding marijuana laws.

Having launched a cannabis brand called Monogram last year, the artist is now spreading his message with posters in Miami and across the U.S. The signs point out that prohibitionist cannabis laws are more widespread and harsh in some states than laws on bestiality and first-cousin marriage.

One sign contains the phrase, "Weed is a federal crime, even in states where sex with farm animals isn't." Another says: "You can marry your first cousin in more states than you can buy recreational weed."

The posters are plastered across Miami, including locations around the downtown Government Center, the Design District, and Liberty City.

The signs include portraits of people who have been arrested for cannabis-related offenses, including a man named Bryan Rone who spent 15 years in prison for the nonviolent crime of transporting several pounds of cannabis from Texas to Virginia in 2001. Now that Rone has been released, his conviction precludes him from entering the cannabis business. He tells his story in a video on Monogram's Instagram page.

"As I'm in prison in 2003, they already had legalized marijuana in the State of California," he says in the video. "So as the years go on and I'm watching marijuana legalize in several different states, there's people in there with violent crimes and they're doing less time than me."

In a press release, Jay-Z called the nation's cannabis laws "out of date and disproportionately cruel."

"I created this campaign to amplify the voices of those who have been penalized for the very same thing that venture capitalists are now prospering from with the emerging legal cannabis market," he said.
click to enlarge Jay-Z's ad campaign in Miami
Photo by Carlos Miller
According to data from the American Civil Liberties Union, Black people are more than three times as likely to be arrested for a marijuana offense than white people, even though people of all races and ethnicities consume cannabis at roughly the same rate. But many white entrepreneurs and politicians are now cashing in on legalized marijuana while scores of Black offenders remain incarcerated for selling or possessing cannabis.

Former speaker of the house John Boehner, for example, now sits on the board of an international cannabis company and chairs a cannabis lobbying firm called the National Cannabis Roundtable. Boehner, a white Republican, had previously voted against medical marijuana in Washington, D.C., and stated that he opposed legalization.

One of Jay-Z's posters points out the irony.

Despite buzz that lawmakers might legalize cannabis at the national level, cannabis advocates fear President Joe Biden will choose a drug czar who'll continue fighting the perennially futile War on Drugs. (It was Biden, a longtime prohibitionist, who coined the phrase "drug czar" back in 1982, a period when cannabis was viewed as the "devil's lettuce.")

Patrick J. Kennedy, a former eight-term congressman from Rhode Island and son of the late Ted Kennedy, has been lobbying Biden for the position of drug czar despite opposition from legalization groups. Kennedy, they point out, helped launch a campaign called Smart Approaches to Marijuana, which has fought legalization efforts across the U.S.

The Marijuana Policy Project is one pro-cannabis lobbying group that has been vocal in speaking out against the choice of Kennedy for the role, whose official title would be director of the White House Office of National Drug Control Policy.

"While Kennedy is a strong voice for mental health, he is the wrong person for this position. His appointment would send exactly the wrong message: that the war on millions of cannabis consumers is alive and well and will continue for another four years," the group states on its website.

Biden has not publicly indicated whom he will choose as drug czar. Regina LaBelle, who was a senior policy advisor for the Office of National Drug Control Policy under the Obama administration, has been filling the role as acting director.
KEEP MIAMI NEW TIMES FREE... Since we started Miami New Times, it has been defined as the free, independent voice of Miami, and we'd like to keep it that way. With local media under siege, it's more important than ever for us to rally support behind funding our local journalism. You can help by participating in our "I Support" program, allowing us to keep offering readers access to our incisive coverage of local news, food and culture with no paywalls.
Make a one-time donation today for as little as $1.