A dead kitten was found on Euclid Avenue in Miami Beach with a note attached. (Click to view the unblurred image.) Courtesy of Blakey Ross
Blakey Ross was walking her mini poodle on Euclid Avenue in South Beach at 11 a.m. on Thursday when she stumbled across a calico kitten lying on its side next to a large scattering of kibble and a plastic water dish. At first she thought the kitten was asleep, but as she moved closer, she realized the cat was dead.

Even more alarming, there was a note taped over the feline's corpse: "FEEDING THE CATS IS PROHIBITED IN THIS PROPERTY!!! CAMERAS ARE ALWAYS RECORDING! THIS IS A PRIVATE PROPERTY. DO NOT FEED THE CATS!!!!"

"The little kitten's face — it's heartbreaking," Ross tells New Times. "I didn't know what to do. I couldn't give CPR. The cat seemed very dead. I was just in shock."

Ross called Miami Beach police. She says an officer arrived promptly at the scene outside the 17-unit Alexandria at South Beach apartments at 1515 Euclid Ave., took her statement, and informed her the case constituted animal cruelty, a third-degree felony punishable up to five years in prison and a $5,000 fine.

She couldn't immediately discern how the kitten died, but the placement beside the cat food, coupled with the note, caused her to wonder whether the cat had been deliberately poisoned. To be safe, she emptied the water dish and collected the cat food in a plastic bag.

"My dog always tries to eat the cat food on our walks," Ross says. "This was already too sad, and I didn't want any other animals to be killed."

A neighbor told Ross the kitten had been a rambunctious one, always sprinting too fast for volunteers to trap as part of the county's Trap-Neuter-Vaccinate-Return (TNVR) program. 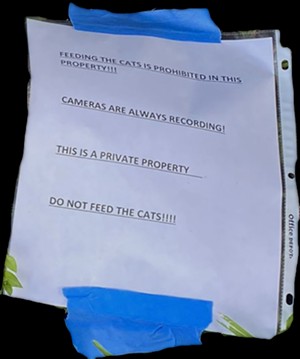 A note was taped over the kitten's corpse.
Courtesy of Blakey Ross

Linda Diamond, president of Sobe Cats and chair of the City of Miami Beach Animal Welfare Committee, says the kitten's death is only the latest incident in a growing tension between residents and registered feeders in the community.

During COVID-19 lockdowns, many spay-and-neuter clinics had to cease operations, and as a result cat populations ballooned. Diamond says she's aware of three cats that died of unnatural causes on the Miami Beach boardwalk near 45th Street.

"There are a lot more cats out there," Diamond says. "When I see that note on that cat — that hostility is misplaced."

Diamond says roughly 300 volunteer feeders are registered through Sobe Cats. The feeders buy their own cat food and work with other volunteers to create a schedule to ensure neighborhood cats are fed twice a day.

For residents, it might appear that feeders are luring the cats to their neighborhoods, but Diamond explains that the feeders are vital for keeping wild cat populations under control: The volunteers report to her team when there are new litters and identify which cats need to be trapped and neutered. Then they work with the trappers to capture the animals.

"Without the feeders, we wouldn't know which cats need to be fixed," Diamond says. "We also wouldn't have the knowledge or rapport with the animals to trap them."

In the past 12 months, Diamond says Sobe Cats has fixed and vaccinated more than 500 cats, and then released them back into the community with a clipped left ear. When a cat is trapped and can be socialized, it is put in the organization's adoption program.

Diamond says police collected the kitten to perform a necropsy. New Times has requested a copy of the incident report from the Miami Beach Police Department and will update this story as events warrant.
KEEP MIAMI NEW TIMES FREE... Since we started Miami New Times, it has been defined as the free, independent voice of Miami, and we'd like to keep it that way. With local media under siege, it's more important than ever for us to rally support behind funding our local journalism. You can help by participating in our "I Support" program, allowing us to keep offering readers access to our incisive coverage of local news, food and culture with no paywalls.
Make a one-time donation today for as little as $1.