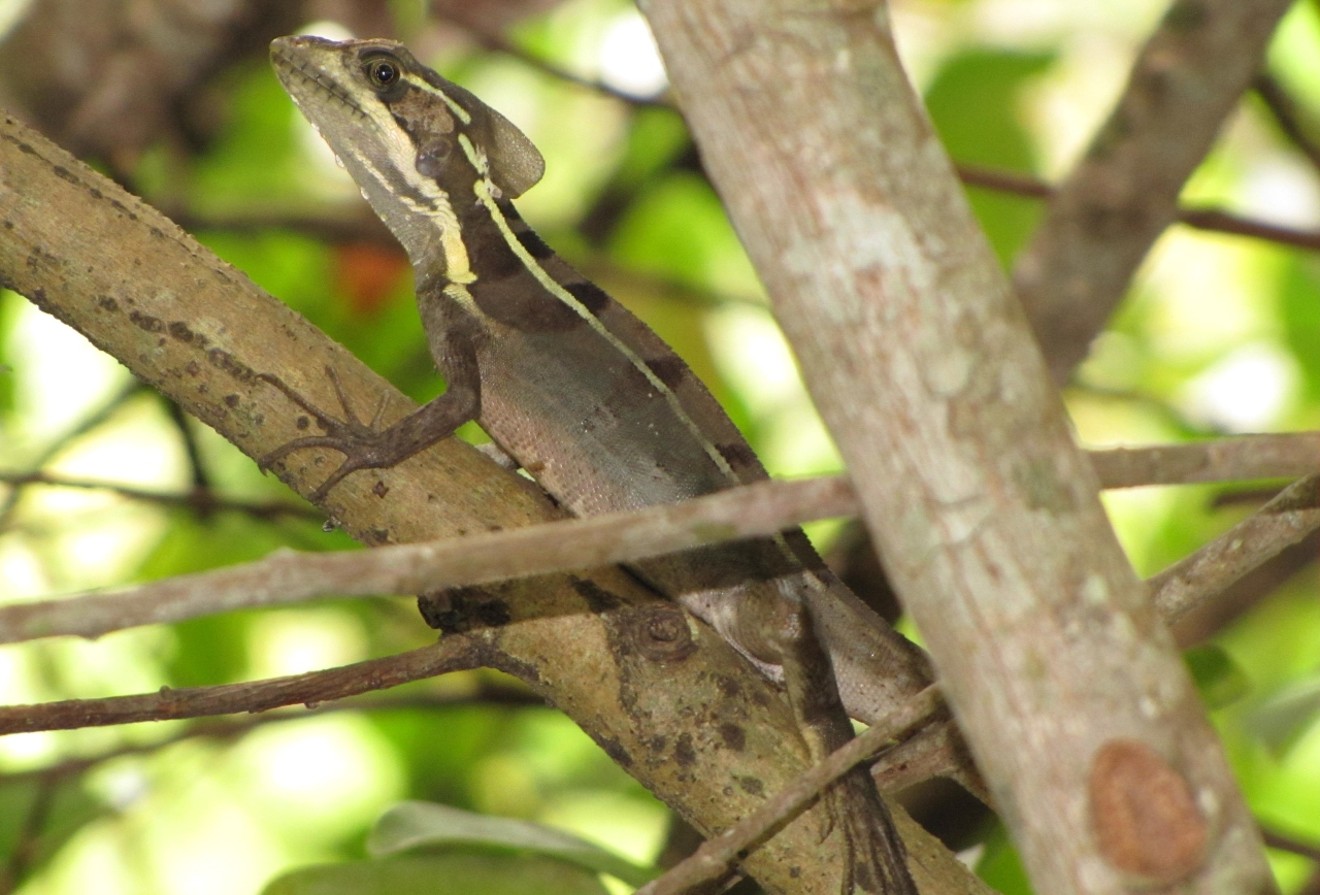 Nonnative brown basilisks have been spotted from Miami-Dade to Brevard counties, but scientists aren't sure what impact they're having on the environment. Photo by Steven A. Johnson via University of Florida.
If you're walking past a canal in South Florida and see something run across the water, chances are you're not witnessing a biblical miracle — just a neat-looking lizard that's not from around here.

The brown basilisk, also known as the Jesus lizard, is a small reptile native to coastal southern regions from Mexico to Panama, with a distinct crest and a bright yellow stripe. The lizards can whip their slender hind toes across the surface of water, allowing them to run across it for several feet when startled or pursued by a predator.

Though their natural range is south of the border, the footlong basilisks came to the Sunshine State via the exotic pet trade and were released into the wild by their owners, much like Florida's many other invasive reptiles. Now, they've spread across South Florida along the east coast from Brevard to Monroe counties, with sightings on the Gulf Coast and around Lake Okeechobee as well.

"When I first encountered them, the first thing I thought of was a miniature velociraptor from Jurassic Park," says Kenneth Gioeli, a natural resources extension agent with the University of Florida's Institute of Food and Agricultural Services (IFAS). "They ran across a ditch in front of me and I saw splashes of water everywhere."

Gioeli is one of two co-authors on a recently published educational document on brown basilisks meant to teach the public about the little critter and what to do if they see one in the wild.

Gioeli tells New Times that brown basilisks are becoming more common in coastal areas and inland freshwater regions in Florida, including around Everglades National Park, where they can be seen splashing about or swimming. He explains that while researchers don't yet have enough insight into how the lizards interact with native wildlife, nonnative species have a chance of replacing existing species that belong in South Florida.

"It’s really a value judgment of whether people want to see these things displace natural wildlife like green anoles, or have native wildlife thrive," he says.

The basilisks have a diverse palate and can eat insects, fruits, small frogs, and even other lizards, so they could pose a threat to local animals upon which they prey.

IFAS currently has ongoing research into brown basilisks to determine if they can amplify dangerous diseases like West Nile virus, and what impact, if any, they may have on people.

To help with efforts to determine how widespread brown basilisks have become in Florida, IFAS and the Florida Fish and Wildlife Conservation Commission encourage anyone who spots the mohawked lizards to call the invasive species hotline at 888-IVE-GOT1 (483-4681) or download the "Ive Got 1" app to upload a photo and provide a location.

"Any nonnative reptile you have as a pet, do not release it into the wild. Contact other hobbyists or pet stores to find them a new home," he says.
KEEP MIAMI NEW TIMES FREE... Since we started Miami New Times, it has been defined as the free, independent voice of Miami, and we'd like to keep it that way. With local media under siege, it's more important than ever for us to rally support behind funding our local journalism. You can help by participating in our "I Support" program, allowing us to keep offering readers access to our incisive coverage of local news, food and culture with no paywalls.
Make a one-time donation today for as little as $1.