Miami-Dade County State Attorney's Office
Twenty-three-year-old Juvon Simon was at his apartment in Florida City when cops showed up on the afternoon of May 30. According to a witness, Simon ran inside, shut the door, and then dropped dead; a preliminary investigation found that Florida City Police Officer Frantz Hardy was responsible for firing two shots through the door, killing Simon almost instantly.

Five months later, details about the shooting remain sketchy. Police say they recovered two guns from the scene, but Simon's family and at least one witness insist Simon was not armed.

In a new lawsuit, Simon's mother, Youseline Pierre-Simon, says it's vital that authorities provide more information about how and why her son was shot. In Florida, families have only two years to file a wrongful-death case before the statute of limitations runs out. But under state law, the bulk of public records about the shooting are exempt from disclosure because the Miami-Dade Police Department and the Miami-Dade State Attorney's Office are still investigating. That means Pierre-Simon's lawyer, Christopher Marlowe, has no access to key documents, such as Officer Hardy's personnel file and disciplinary history.

"Since he’s a police officer, the State Attorney's Office will be investigating this for I don't know how long," Marlowe says. "We won't have this information until they close their investigation." 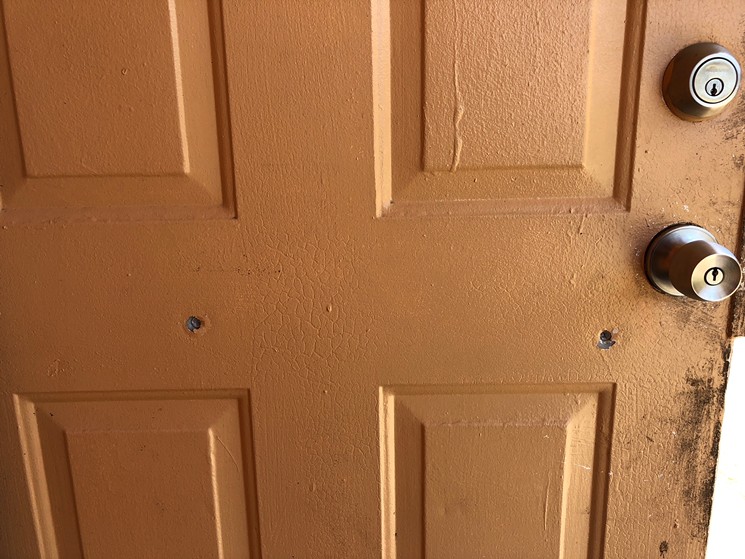 A crime scene photo from the shooting of Juvon Simon shows two bullet holes through the apartment door.
Photo courtesy of Dan Kaufman and Christopher Marlowe
On October 9, Marlowe filed a complaint against Florida City and State Attorney Katherine Fernandez Rundle asking a judge to force them to turn over documents regarding the shooting. The complaint cites reporting from New Times journalist Jerry Iannelli, who wrote in 2017 about the astonishing number of open investigations into police-involved shootings in Miami-Dade. The analysis found nearly half of the 59 open cases had been pending for more than two years; nine of the cases had been ongoing for four-plus years.

"I’m not accusing Katherine Fernandez Rundle of acting in bad faith," Marlowe says. "What I have a real concern about is the documented history of the length of these investigations."

Spokesman Ed Griffith tells New Times the State Attorney's Office is waiting for the Miami-Dade Police Department to finish investigating Simon's death before conducting its own probe. He declined to comment further on the new lawsuit. Regine Monestime, the attorney for Florida City, did not respond to a request for comment.

Marlowe says he is also concerned about the integrity of the investigation. "It’s my understanding that Mr. Simon was not armed at any relevant time here, and I have a very real concern that if a gun was found on him, it was put there by someone else," the attorney says. "From my work on the ground, I have learned that this officer went into the crime scene and disturbed it before it was properly documented."

According to Marlowe, Simon had been arrested in the past by Florida City Police officers, but those charges were dismissed by prosecutors. The attorney believes the police union released a video of Simon's supporters cursing at police to "[have] people believe the worst of Juvon Simon."

"That the police department is trying to paint him and his friends with some criminal brush based on arrests that turned out to be unfounded, unsubstantiated, and later dropped is really disturbing," Marlowe says.
KEEP MIAMI NEW TIMES FREE... Since we started Miami New Times, it has been defined as the free, independent voice of Miami, and we'd like to keep it that way. With local media under siege, it's more important than ever for us to rally support behind funding our local journalism. You can help by participating in our "I Support" program, allowing us to keep offering readers access to our incisive coverage of local news, food and culture with no paywalls.
Make a one-time donation today for as little as $1.