After Hurricane Ian battered Florida's gulf coast, Wallach's fishing charter business, Aquatic Escapes, took a hit. Charters he had scheduled for the coming weeks were canceled, and his boat sustained damage from the devastating storm, though he was better off than most.

But instead of sitting around in Tampa, which avoided the worst of Ian's wrath, Wallach drove down to ground zero in decimated communities of southwest Florida. He and other captains look to make like the boatmen of old, ferrying people on and off the now-isolated Sanibel Island.

"I'm devoting any time I have off for the next five weeks to get down there," Wallach tells New Times. "I'm able to benefit from some disaster work now that business is slow, but I also get to give people an opportunity to get back to the island since the bridge is out. It's feel-good work."

Wallach joins a growing list of fishing guides and boat captains for hire who are taking residents to and from Sanibel Island. Residents who need to survey the damage are landlocked while the Sanibel Causeway — the only road on or off the island — remains in shambles.

Sanibel city officials hope to have a temporary road connecting the island back to the mainland in place by the end of October. The Sanibel Causeway collapsed after sustaining severe damage in Hurricane Ian.
Photo by Jarrod Wallach
The boatmen are part of an operation by the nonprofit group Captains For Clean Water (CFCW), which has coordinated with the City of Sanibel to help residents and keep fishing guides afloat.

"Operation Sanibel Support is an informal partnership with the City of Sanibel to try to facilitate giving out-of-work guys an opportunity to make some money using their boats, and to take residents back and forth from the island," says Jessica Pinsky, director of policy and public affairs for CFCW.

The nonprofit invites licensed boat captains and fishing guides affected by the storm to reach out to them to join their charter directory at Captainsforcleanwater.org. CFCW vets the boatmen to ensure they are licensed and insured, requires them to stick to strict pricing guidelines, and lists their contact info on the directory.

The captains aren't allowed to charge more than $300 for one to two hours of transportation, and residents who use the service are encouraged to fill out a CFCW survey if a captain overcharges them.

"We’ve been very firm with the guides – there’s no price gouging on this. Some of the guides have actually donated a lot of trips," Pinsky tells New Times.

The residents of Sanibel, many of them retirees and snowbirds, were evacuated from the island just before Ian annihilated the small city.

Many of their homes now lie flattened, and once-crystal clear water is now murky with silt and sullied by debris. While residents were recently allowed to return to Sanibel with hurricane reentry passes last week, those without a boat struggled to find a way back to the island.

Fishing guide Chris Conant has already taken a friend to Sanibel to assess the damage to his home. Folks looking for ferry service hope to salvage what they can from their properties and take photos of the destruction for insurance purposes.

Since many boat ramps in the area were washed away by Ian, Conant had to launch from the Caloosahatchee River further north and ferry his charge southwest through San Carlos Bay. He followed in the wake of larger boats to avoid running into wooden pallets, capsized ships, and other floating ephemera from a seaside town rocked by the disaster.

When they arrived at the island, what Conant saw shook both him and his passenger.

"We went around the lighthouse and it was breathtaking because there was nothing out there," Conant tells New Times. "The fella I took was a retired fighter pilot, and he said this was the worst destruction he's seen that wasn't caused by a bomb." 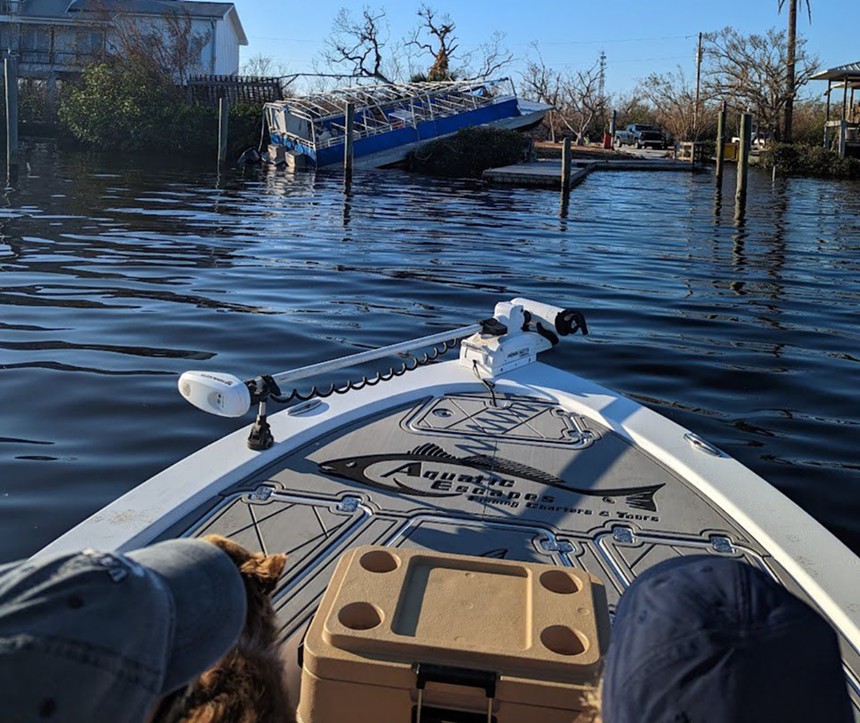 Boat captain Jarrod Wallach ferries a client onto Sanibel Island, a paradise-turned-disaster zone where Hurricane Ian flattened many of the homes and landmarks.
Photo by Jarrod Wallach
Though the destruction is hard to look at, Conant says the ferrying gig is a welcome buoy for his business. His usual operation as a fly fishing guide for Morning Dew Fishing Company in Pine Island Sound is on hold owing to the storm.

"A lot of us were looking forward to the fall fishing season when things got busy again. Now I don't anticipate running any trips out there for at least six months," he says.

CFCW's list currently has more than 30 fishing guides and captains for Sanibel residents to call for charter trips.

The nonprofit also has a volunteer trucking operation to get emergency supplies from warehouses around southeast Florida to the most severely impacted areas in the southwest. The group sent chainsaws and generators for emergency work in the first days after Ian and is now shipping diapers, nonperishable foods, and groceries to Fort Myers Beach and Punta Gorda.

"We’re just trying to do whatever we can to help," Pinsky says.

Those looking to get on the island are encouraged to use CFCW's list or call other licensed boat captains to charter trips. The U.S. Coast Guard is monitoring the area for unlicensed boaters who are illegally charging residents for ferry service. The Coast Guard office in Tampa says it is advising people to stay off the water and avoid illegal charter services from boat owners without proper training, as the debris-laden waters are particularly dangerous after the storm.

"It's illegal for any Joe Schmoe with a boat to charge people to take them to the island," Wallach explains. "But if people do it with the proper captains, they'll get there safely."
KEEP MIAMI NEW TIMES FREE... Since we started Miami New Times, it has been defined as the free, independent voice of Miami, and we'd like to keep it that way. With local media under siege, it's more important than ever for us to rally support behind funding our local journalism. You can help by participating in our "I Support" program, allowing us to keep offering readers access to our incisive coverage of local news, food and culture with no paywalls.
Make a one-time donation today for as little as $1.