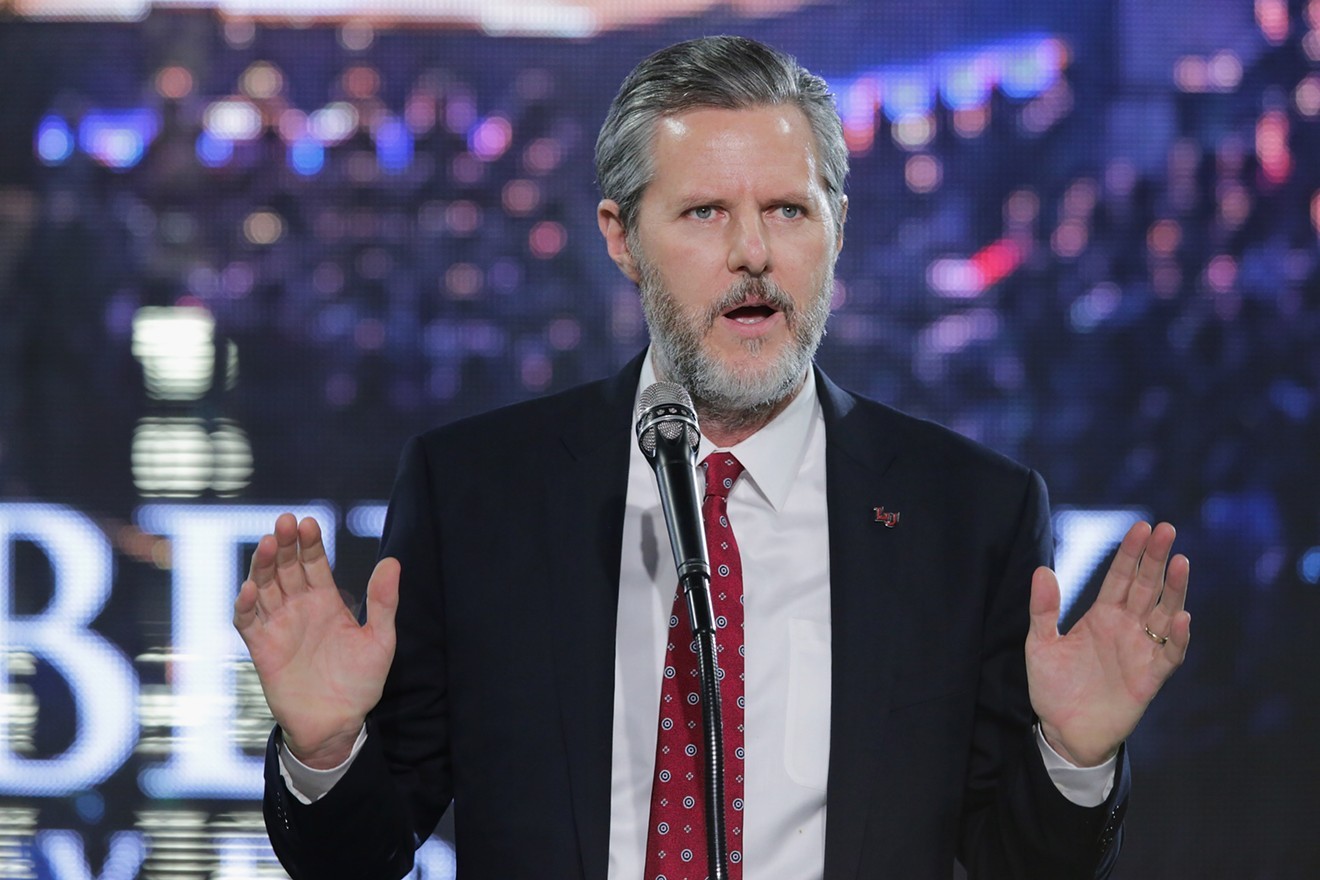 Billy Corben coproduced a documentary about a sex scandal involving Jerry Falwell Jr. and a Miami Beach pool boy. Photo by Chip Somodevilla/Getty Images
As documentarian Billy Corben geared up for the release of his upcoming documentary about the well-publicized sex scandal involving a Miami pool boy and evangelist Jerry Falwell Jr., he contacted his alma mater, the University of Miami (UM), to ask whether the school would be interested in scheduling a screening at its Bill Cosford Cinema.

"It would be an opportunity [for students] to engage with the filmmakers and perhaps some of the interview subjects of the documentary," Corben tells New Times.

To his surprise, the university declined to screen the film, God Forbid: the Sex Scandal That Brought Down a Dynasty, in spite of his successful career and past ties to the school, including routine classroom visits to speak with students on campus.

Moreover, it seems the college's decision to pass on the film wasn't due to a scheduling issue, inappropriate content, or some other such glitch. Rather, he says, it was because of his Twitter comments.

"'Unfortunately the Cosford Cinema cannot accommodate the premiere screening of your Jerry Falwell documentary due to previous negative publicity and comments you have made about the University of Miami School of Communication,'" Corben relates, quoting the explanation he says was provided to him on behalf of a Cosford Cinema supervisor.

And where was Corben when he got the news?

"Ironically, while I was actually leaving campus after a [radio] interview with WVUM, I get a call from the Cosford theater manager telling me they are refusing to screen our new documentary," Corben says. "And the reason was even more surreal: It's apparently because of some mean tweets about the school of communication." 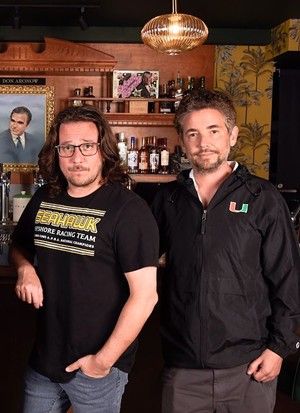 Billy Corben and Alfred Spellman, partners in the Miami-based film company Rakontur
Photo by Michele Eve Sandberg
New Times emailed and called the office of Konstantia Kontaxis, chair of UM's Department of Cinematic Arts and an award-winning documentary and narrative filmmaker, but has not received a response. According to UM's website, Kontaxis has served as curator/advisor for the Norton Herrick Center for Motion Picture Studies and the Cosford Cinema since 2012.

When reached by New Times, Rene Rodriguez, who manages the Cosford Cinema, deferred to UM's media relations department. Peter E. Howard, assistant vice president for communications and public relations, directed a reporter to submit a request in writing. This story will be updated if and when the school responds.

Corben says his allegedly offensive tweets weren't specified by the university. He scoured his Twitter account to locate any likely culprits but to no avail.

"I don't know what it is, but I do know that I had screenings on and participated at the cinema," Corben adds. "These are the kinds of opportunities that the university should be providing to its students, and the school of communication apparently has issues with criticism and wants to silence certain voices."

Corben notes that the snub seems to contradict a journalism school's ostensible mission: to foster freedom of speech and fight censorship.

He adds that he has no intention of letting the rejection discourage him from continuing to visit the campus to speak with students and faculty. At the onset of the pandemic, for instance, he participated in "Career Conversations" to share his experience working as a documentary filmmaker.

"I would never allow the reckless actions and opinions of one individual to change my opinion on the campus community as a whole," Corben says. "This is certainly not going to stop me. I have an incredible amount of respect for the students and the faculty, who do a lot of good work over there."

That said, he points out that the university administration gave him a hard time when he was working on a pair of documentaries, The U and The U: Part 2, which chronicled the rise and fall of the UM Hurricanes' football dynasty. He says he has grown accustomed to behavior he believes is intended to stifle dissent.

"I'm kind of used to pushback from the administration," Corben says. "It's a shame that this is how the university treats its graduates. I offered them an opportunity like I've offered another almost half a dozen venues in town or in South Florida, all of which have said yes."

God Forbid: the Sex Scandal That Brought Down a Dynasty, coproduced by Corben, Alfred Spellman, Oscar winner Adam McKay, and Todd Schulman, will premiere on Hulu on November 1. Corben is in talks with several venues around South Florida to schedule in-person screenings.
KEEP MIAMI NEW TIMES FREE... Since we started Miami New Times, it has been defined as the free, independent voice of Miami, and we'd like to keep it that way. With local media under siege, it's more important than ever for us to rally support behind funding our local journalism. You can help by participating in our "I Support" program, allowing us to keep offering readers access to our incisive coverage of local news, food and culture with no paywalls.
Make a one-time donation today for as little as $1.