Moving to Miami: How to Live Here Without a Car 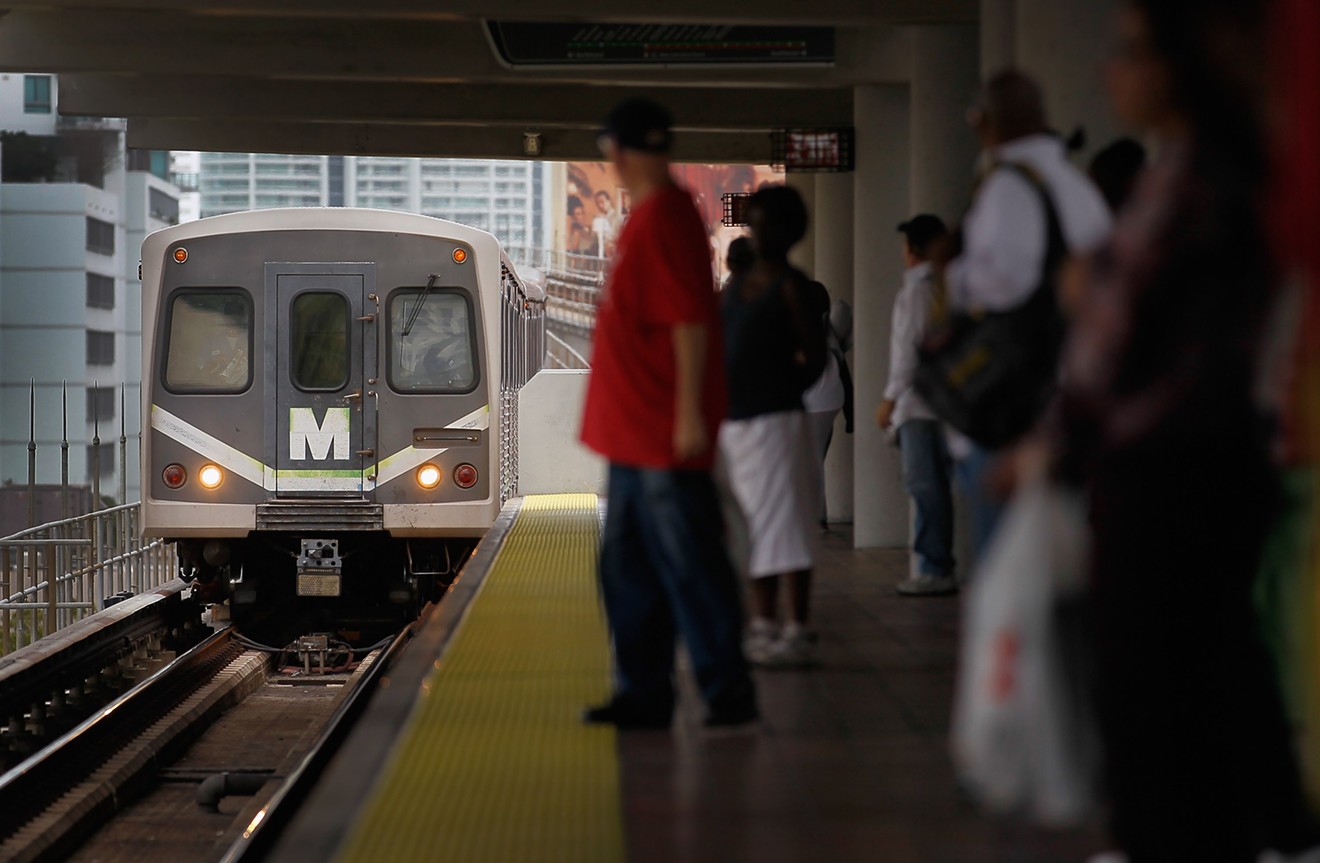 If you want to live in a city with robust mass transit, there's always New York. Metro areas like San Francisco and D.C. make ditching car ownership easy. Hell, even Los Angeles has been working on expanding its rail service by using a mix of heavy- and light-rail lines, and a new 8.5-mile line is set to open in 2020.

Then there's Miami and the surrounding areas, where inept politicians care more about pleasing real-estate developers than putting any thought into how the rapidly growing population is supposed to get around the city effectively.

However, with some research and a lot of patience, a car-free lifestyle is possible.

No matter how hard you try, choosing to live in far-flung suburban areas such as Kendall, Cutler Bay, Doral, and Miami Lakes makes a carless existence tough. The key here is selecting an area within Miami's urban core — that means sticking to the cities of Miami and Miami Beach. Neighborhoods outside the core's boundaries are often poorly served by public transit, and ridesharing can be prohibitively expensive.

Miami and Miami Beach have much more regular bus service, plus designated bike lanes and Metrorail and Metromover. The two cities are also decidedly more walkable than many other areas. You'd be surprised how many neighborhoods in the greater Miami area lack sidewalks, making traveling on foot a choice between dangerously treading the road's edge or trekking on grass and mud on the swale.

In 2002, Miami-Dade voters approved a half-penny tax increase meant to improve the mass transit infrastructure. Seventeen years later, not much has changed except for Metromover dropping its 25-cent fare and Metrorail extending 2.4 miles to Miami International Airport (MIA). The grand promise that heavy-rail lines would stretch to every corner of the county never came true.

Alas, you gotta learn to work with what you've got. First, download the Miami-Dade Transit Tracker app, which features such a badly designed user interface and graphics it feels like a long-discarded AOL channel. Still, the savior of the app is that bus and train arrivals are updated in real time thanks to GPS tracking. If you live near a bus stop, that means you can easily leave your house five minutes before its arrival and spare yourself from waiting in brutal weather.

You would think the half-penny tax would've at least gone to improving bus shelters, but even with the revenue from display ads in shelters, Miami-Dade Transit (MDT) still hasn't gotten its shit together. (Ideally, MDT would rotate between the arrival times and advertising on shelter displays.) Most shelters reek of piss, and there's garbage strewn everywhere despite the fact there are trash cans at every stop. However, bus shelters are not available at every stop, so pack an umbrella.

There's no greater debate among Miami drivers as to whether bikes are allowed on the road.

Metrorail stations, on the other hand, are always sheltered and, thanks to their elevation, offer an occasional breeze despite the lack of air conditioning. Where Metrorail fails is it's essentially one line that mostly travels north-south. MDT touts three lines, but the only difference between the Orange and Green lines is that the Orange ends at MIA — both lines cover most of the same area. There is a supposedly a Downtown Express, but is that really a separate line? And though MDT is in the midst of swapping out its trains for new ones, safety concerns over the aging infrastructure continue to crop up, including acoustic barriers alongside the tracks that could fall and hurt pedestrians, as well as the lack of suitable maintenance personnel.

Ridesharing is a necessary evil

You've probably read all the horrible stories about how Uber and Lyft drivers can barely earn a living wage as the United States quickly transforms into a gig economy. Well, most Miamians consider ridesharing a godsend. Before app-based services were the norm, the city had a woefully inadequate number of taxis, making it all but impossible to hail a cab during peak event dates. Furthermore, taxis rarely took credit cards, and drivers often tried taking longer routes in order to inflate fares.

Lyft and Uber changed the industry overnight — whether that's a good thing is still up for debate. However, now an Uber or Lyft driver is rarely more than five minutes away. Both companies also offer cheaper alternatives to their base services; the least expensive option is to share a ride with other users.

Don't dismiss taxis completely, though. During peak hours and weekends, Uber and Lyft rates can skyrocket, but cab rates are set by the county and don't fluctuate. And in order to better compete with ridesharing — and because of a county mandate — taxis are now equipped with credit card machines.

The last mile can be brutal

Though bus service is frequent in the urban core, there are still perplexing gaps within the system. For example, though buses travel north and south on Biscayne Boulevard, NE Second Avenue, and NW Second Avenue, if you want to get to Wynwood with minimal walking, grabbing the route that goes through NW Second Avenue is essential. Otherwise, routes a bit farther east will drop you off about a mile from the popular destination. There is no east-west service that takes buses down NE 29th Street, which is sorely needed.

To remedy that problem, e-scooters have popped up to provide a quick way to travel that final mile. Bird, Bolt, Jump, Lime, Lyft, and Spin are all available and basically work the same way: You find an available scooter, scan it on the app, and away you go. However, in Miami, there's a strict zone in which they are allowed to operate. (Other cities also allow them but usually limit the service to one or two companies.)

Bike at your own risk

There's no greater debate among Miami drivers as to whether bikes are allowed on the road. (They are.) However, even with the law on bicyclists' side, drivers are often aggressive toward pedal-driven transport. Whether you think it's cool or not, always wear a helmet, and try to avoid roads with heavy traffic. If you are totally uncomfortable with riding on city streets, bike on the sidewalk, but be aware of poor sidewalk conditions and of pedestrians. For instance, if you're trying to get to Edgewater and Midtown from the Upper Eastside, take NE Fourth Court instead of Biscayne Boulevard.

If you don't own a bike or don't want the hassle of maintaining one, there's Citi Bike, a program that allows users to borrow a bike from a conveniently located dock and return it to any of the docks in Miami or Miami Beach at their leisure. Pricing ranges from $4.50 for 30 minutes to $24 for all-day access. However, residents can buy a monthly membership for unlimited rides starting at $15.

Instead of investing in real transportation, local municipalities have gone trolley crazy. Miami, Miami Beach, and Coral Gables all have their own versions. The plus side? It's free. The downside? Service can be limited in terms of time and frequency. In the case where the trolley meets mass transit, such as the stop at the Douglas Road Metrorail station to take commuters on their last-mile journey into downtown Coral Gables, it actually serves quite well. By far, the worst trolley system is probably Miami's, with odd routes, particularly on Biscayne.