Miami Businesses Board Up in Preparation for Election Day Unrest

Some Miami-Dade businesses are boarding up ahead of Election Day, including the Sunglass Hut in Miami Beach. Photo by Jessica Lipscomb
Some Americans are so fearful and anxious about the impending results of the presidential election, they're planning to ride out the aftermath in survivalist bunkers in case of unrest.

Law-enforcement agencies across the U.S. are on alert for violence and election-related threats. In the City of Miami, police chief Jorge Colina released a video informing residents that "a lot of officers" will be working on Election Day. Colina merely echoed what election officials have been saying, which is that there's a chance we won't know the winner tomorrow night. He asked that voters be patient and "trust the process."

"We're not gonna allow anyone to take advantage of your fear or anxiety as it relates to this election," Colina says in the video. "We're doing great so far. We don't have any information here that is telling us that something bad is gonna happen. So go out and vote, and we're gonna make sure we do our job to keep you safe, and everything's gonna be fine."

Nevertheless, some Miami businesses are taking precautionary measures in anticipation of unrest following the announcement of election results.

Miami artist AholSniffsGlue posted a photo on Instagram showing the Ross in Midtown covered with plywood. An employee at the door told New Times they couldn't comment on the store's precautions.

As of this afternoon, it was the only business in Midtown that had boarded up.

Ross is boarded up in Midtown Miami.
Photo by Joshua Ceballos
In Miami Beach, an employee at the Sunglass Hut on Lincoln Road told New Times that corporate had ordered all stores to be boarded up ahead of Election Day. As of this afternoon, it was the only store on Lincoln Road that had taken that precaution. 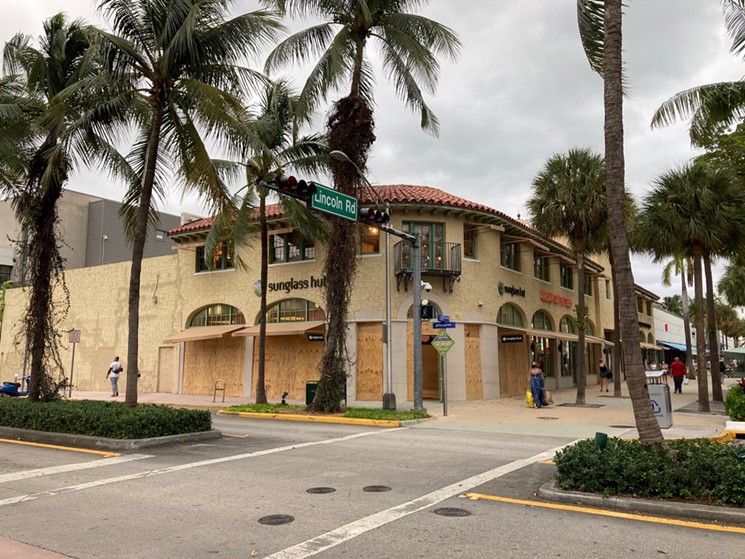 The Sunglass Hut on Lincoln Road is boarded up.
Photo by Jessica Lipscomb
The Sunglass Hut at Bayside Marketplace in downtown Miami is also boarded up. Bayside was vandalized and looted one night in late May during the mostly peaceful protests that followed the death of George Floyd, the Black Minneapolis man who died after a white police officer pinned his knee to Floyd's neck.

Businesses across the U.S. are boarding up their storefronts, changing their hours, and taking other precautions. USA Today reports that Walmart has pulled guns and ammunition from its sales floors in case of post-election violence. Plywood is in short supply as businesses prepare.

News editor Jessica Lipscomb and staff writer Joshua Ceballos contributed to this report.
KEEP MIAMI NEW TIMES FREE... Since we started Miami New Times, it has been defined as the free, independent voice of Miami, and we'd like to keep it that way. With local media under siege, it's more important than ever for us to rally support behind funding our local journalism. You can help by participating in our "I Support" program, allowing us to keep offering readers access to our incisive coverage of local news, food and culture with no paywalls.
Make a one-time donation today for as little as $1.