Congressional candidate Donna Shalala Hudson Institute / Flickr
A federal judge Tuesday cleared the way for a developer to bulldoze 88 acres of critically endangered Miami pine rocklands. One of the last shreds of an ecosystem that does not exist anywhere else on Earth will soon become an apartment complex with a Chili's, LA Fitness, and Walmart attached.

This tragedy could not have happened without the help of former University of Miami President Donna Shalala, who is now running for U.S. Congress and hopes to paint herself as a progressive, environmentally conscious Democrat. The developer, Palm Beach County-based Ram Realty Services, bought the 88-acre plot of land from the university while Shalala was in charge. Rather than protect the area, she and UM instead flipped it for $22 million — a complete steal for the developer in light of the relative worth of nearby property.

Shalala must answer for that decision if she wants green votes, multiple Miami-based environmental groups say.

"I think her selling this off was reprehensible, honestly," Matthew Schwartz, director of the South Florida Wildlands Association, tells New Times. "They are the main culprit in this project. They’re a university that is heavily involved in environmental science in this region. They knew what the property was."

Shalala's campaign did not respond to a message from New Times yesterday, and last week her central campaign strategist and spokesperson, Fernand Amandi, declined to set up an interview with the candidate. This past March 5, she filed to run for Congressional District 27, which encompasses Miami Beach, some of downtown Miami, and Little Havana.

Last week, New Times noted Shalala has a host of questions to answer about her past few decades of private life and public service, including pushing hard for the War on Drugs in the '90s, fighting with the University of Miami janitors' union, making $5 million in a stock sale after serving on the board of a massive for-profit medical insurance company, running the Clinton Foundation, and serving on the board of a company that sold subprime loans and contributed to the 2008 housing crash.

But the issue that particularly bugs environmentalists is her handling of UM's stretch of pine rocklands, an 138-acre tract that sits near Zoo Miami in Southwest Miami-Dade. As of 2015, only 2,900 acres of pine rocklands existed in the world outside Everglades National Park, and the ecosystem is home to scores of endangered species, including the Florida bonneted bat and the bald eagle. (The habitat once covered more than 185,000 acres in South Florida.)

The federal government first leased portions of the land to UM researchers in 1946 — but in a 2006 lawsuit, the U.S. Department of Justice alleged those university researchers used the plot to instead dump “hazardous substances,” including carbon, cesium, tritium, chromium, and sulfur, as well as radioactive waste. That hazardous material included "radiated animal carcasses," including monkey parts that had been used in experiments. Shalala settled the DOJ suit in 2006 and agreed to have the university pay roughly $400,000, which was about half of what the U.S. Army Corps of Engineers said it spent to clean up contaminated areas on the property.

The federal government donated the land to UM piece-by-piece throughout the '80s and '90s. After Shalala's term as President Bill Clinton's secretary of health and human services ended in 2001, she moved home to Miami and began running the university that year.

The land is governed by deed restrictions requiring its owner to maintain it, and environmentalists say the university clearly failed to do so, including while Shalala ran the school. Schwartz, of the Wildlands Association, notes the university let invasive plants take over the land while failing to conduct "controlled burning" to keep the plants healthy. But, he tells New Times, all 138 acres could easily be restored with some minor remediation work.

Instead, Shalala spent roughly ten years entertaining proposals to build on the pine rocklands. In 2006, the university unveiled plans to build a "South Campus" on the plot, including 1,100 "affordable" apartment units for faculty members at 12500 SW 152 St. At the time, environmental groups, including the Tropical Audubon Society and the Institution for Regional Conservation, demanded that UM kill the idea. A geology student even wrote a scathing op-ed in the Miami Hurricane student newspaper that year excoriating the school.

"UM defends its decision to develop the land by purporting its actions as less destructive than they seem," then-student Miles Kenney-Lazar wrote. "However, after examining the evidence, it becomes readily apparent that UM’s interests are rooted in profit and image rather than environmental responsibility."

Thanks to the outcry from environmentalists, plans to develop the property stalled. Instead, in 2014 Shalala's university pulled a surprise move and sold off 88 of the 138 acres to Ram Realty Services, a developer that wanted to turn the habitat into the Walmart/Chili's/apartment property, called Coral Reef Commons. 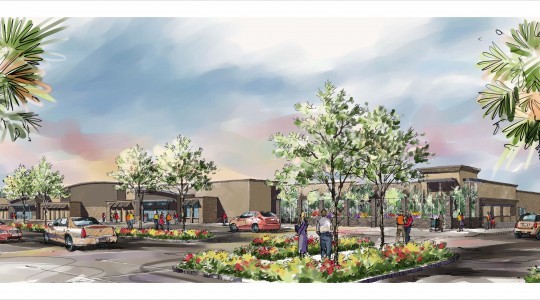 A rendering of Coral Reef Commons
via Ram Realty
Environmental groups in the past have noted Shalala's ties to local property developers. While serving as UM president, Shalala also sat on the board of directors for Lennar Corporation, the second-largest homebuilding company in America, from 2001 to 2012. (While she sat on the board, Lennar sold subprime loans and greatly contributed to the U.S. housing crash in 2008. Shalala left that board only years after Lennar's CEO, Stuart Miller, joined the UM Board of Trustees in 2002. Lennar reported to investors in federal documents that Shalala left Lennar in 2012 in order to avoid a "conflict of interest." She re-joined Lennar's board in 2017 after leaving UM.)

As it so happens, Ram Realty Services and Lennar worked together on at least one project, in North Carolina in 2013, a year before UM announced it was selling the plot of pine rocklands.

Nearby residents have long maintained they expected UM would agree to develop only a much smaller, more manageable project if anything were ever to be built on the land. In lawsuits, environmentalists have argued that residents were not properly notified about the Walmart project before UM's sale and Ram Realty's project were already approved.

The plan has sparked little but protests and legal battles since it was made public. The Miami Pine Rocklands Coalition, led in part by former TV news reporter Al Sunshine, has filed multiple lawsuits in an attempt to stop the development. The coalition joined three other environmental groups in suing the U.S. Fish and Wildlife Service in December for giving Ram a permit to demolish the land — the suit initially guaranteed that Ram couldn't further bulldoze the rocklands, but U.S. Judge Ursula Ungaro nixed that restraining order this past Tuesday. Ram is now legally allowed to decimate the area while the suit is ongoing.

Environmentalists are upset with Ram, but many say they're even angrier with Shalala and UM, who were under no obligation to sell off an endangered area for relative peanuts.

“She told the county commission that the South Campus at Richmond would be an academic village, but she worked with a developer to turn it into Coral Reef Commons, a Walmart Supercenter site instead," Cully Waggoner, the Pine Rocklands Commission's vice president, tells New Times. "She can't be trusted, and now she is running for Congress. How much more damage can she inflict on Miami?"

Sunshine has also posted online that he and other environmentalists plan to protest one of Shalala's upcoming campaign events.

"If you hear of any of her events, we want to let her know what WE THINK of her actions to sell off the UM South Campus to be bulldozed for more urban sprawl," he wrote online Tuesday. "For years we tried reaching out to her on this issue. For years, she ignored us."

He then quoted an old proverb: "One good turn deserves another."

This story has been updated to include additional information about Stuart Miller's tenure as a UM trustee.