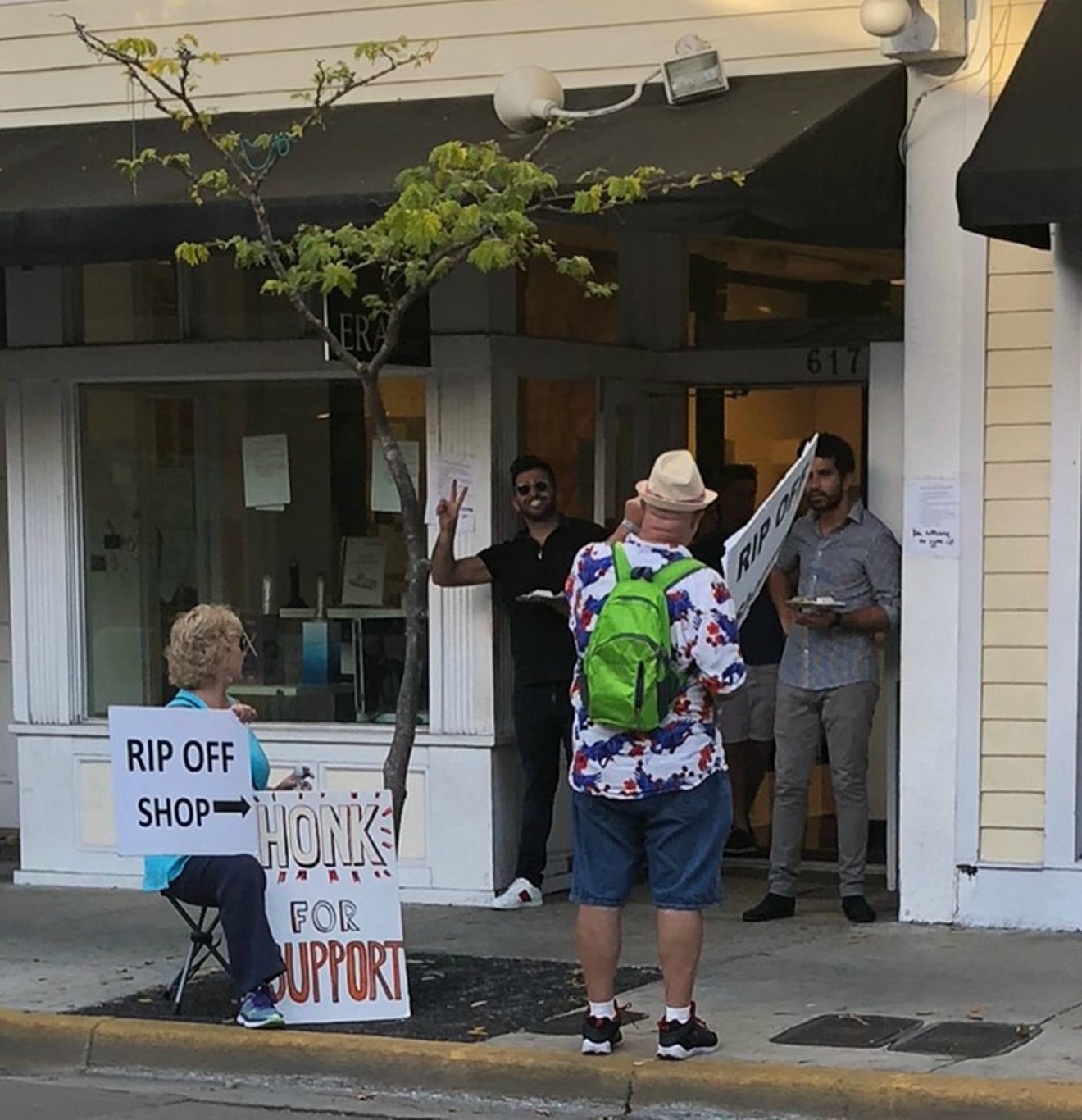 Photo by Brittany Shammas
A bizarre scene played out recently on Key West's premier strip, Duval Street. Outside of Orogold — a store that hawks alleged age-defying cosmetic products — a line of protesters waved signs reading "RIP OFF SHOP." Meanwhile, the store's co-owner, Zohar Alon, stood his ground with a sign of his own, this one scrawled with the word "Nazis."

"I'm protesting like you," he said as one of the picketers recorded video. "Nazis, Nazis! Nazis, people. Stay away from those people."
It was the culmination of an unusual, weeks-long demonstration. Anyone who's ever been to a vacation spot has encountered a shop or kiosk like Orogold, where attractive young salespeople — most of them from Israel — aggressively push skin-care products with price tags in the hundreds or even thousands of dollars. They sometimes promise age-reversal effects comparable to plastic surgery and insist the buyer is getting an incredible deal.

An investigation by the Times of Israel revealed that such cosmetic companies advertise online and in newspapers in Israel, promising lucrative salaries. They teach participants how to lie on their tourist visa applications, pack them into houses with other salespeople, and force them to work long hours with commission for pay. The report said the industry had caught the attention of the FBI and Homeland Security in the United States.

Orogold, which has franchise locations around the world and sells products it claims contain pure gold, was not named in the story, though it shares characteristics with those mentioned: high-pressure sales, cosmetics in the hundreds or thousands of dollars, and a partially Israeli workforce. The company has complaints with the Better Business Bureau and on sites like Trustpilot.

Reached by phone, the co-owner of the Key West location, Nir Chen, defends his business, saying it's legitimate and the prices are fair. The store generally can't take returns because the products have often been opened, he says, likening it to accepting returns of half-eaten food. As for claims sales tactics are overly pushy, he says no one locks customers inside.

The protest has been hurting business. And it has sometimes turned ugly. Chen sent New Times a few videos of his own: In one, a belligerent man yells at Orogold representatives, "Go back to Europe!" In another, a man holding a "Rip off shop" sign appears to hit the phone of an employee.

"I think it's a little bit like the Mafia out there," Chen says. "That's how they work — they sabotage the business to get what they want."

The group leading the protests is called the Key West Rip Off Rapid Response Team; it pickets outside stores it contends are taking advantage of consumers. Bruce Mitchell, one of the founders, says it started when a mentally ill woman was coerced into spending $40,000 at another Duval Street shop that sells age-reversing products.

"It was so outrageous that and a friend made some homemade protest signs and went and picketed in front of the store," he says. "And it ended up taking 19 days — they returned the money, but we picketed for 19 days to get an agreement on best business practices."

Key West has five cosmetic stores that employ tactics akin to Orogold's, Mitchell says. His group, which formed in 2014, has periodically led protests after hearing horror stories from burned customers. "We had a Vietnam veteran who had a hundred percent mental disability and he spent $9,800 in cosmetics because he thought he had met his soulmate," Mitchell claims, adding that protests started at Orogold a couple of weeks ago after complaints piled up.

The store owner's counterprotest complete with the Nazis sign came on Day 15, which happened to be International Holocaust Remembrance Day. This got the attention of Mayor Teri Johnston, who told the Key West Citizen, "Both sides are fueling each other now and the whole situation is not good for Key West or for the neighboring businesses."  Chen doesn't think his approach was the right one, that it's unfortunate it coincided with International Holocaust Remembrance Day (January 27), and that he talked to Alon and got him to stop. But he notes that the protest has taken a toll.

"I guess they pushed him to the point that they just felt like they needed to do something," he says.

Alon says he has no regrets: "I stand by that. Because that's what they are. They're racist people. The whole city, it's a racist city. You would be surprised."

Mitchell says the protest has nothing to do with national origin, adding that some of the protesters are Jewish. He says Alon's Nazi sign and chants were offensive.

"It shows two things: desperation and ignorance," he says. "And he's trying to divert the issue from their business practices to one of discrimination or bias. And we will have none of it. We're not going to be distracted from our mission."
KEEP MIAMI NEW TIMES FREE... Since we started Miami New Times, it has been defined as the free, independent voice of Miami, and we'd like to keep it that way. With local media under siege, it's more important than ever for us to rally support behind funding our local journalism. You can help by participating in our "I Support" program, allowing us to keep offering readers access to our incisive coverage of local news, food and culture with no paywalls.
Make a one-time donation today for as little as $1.