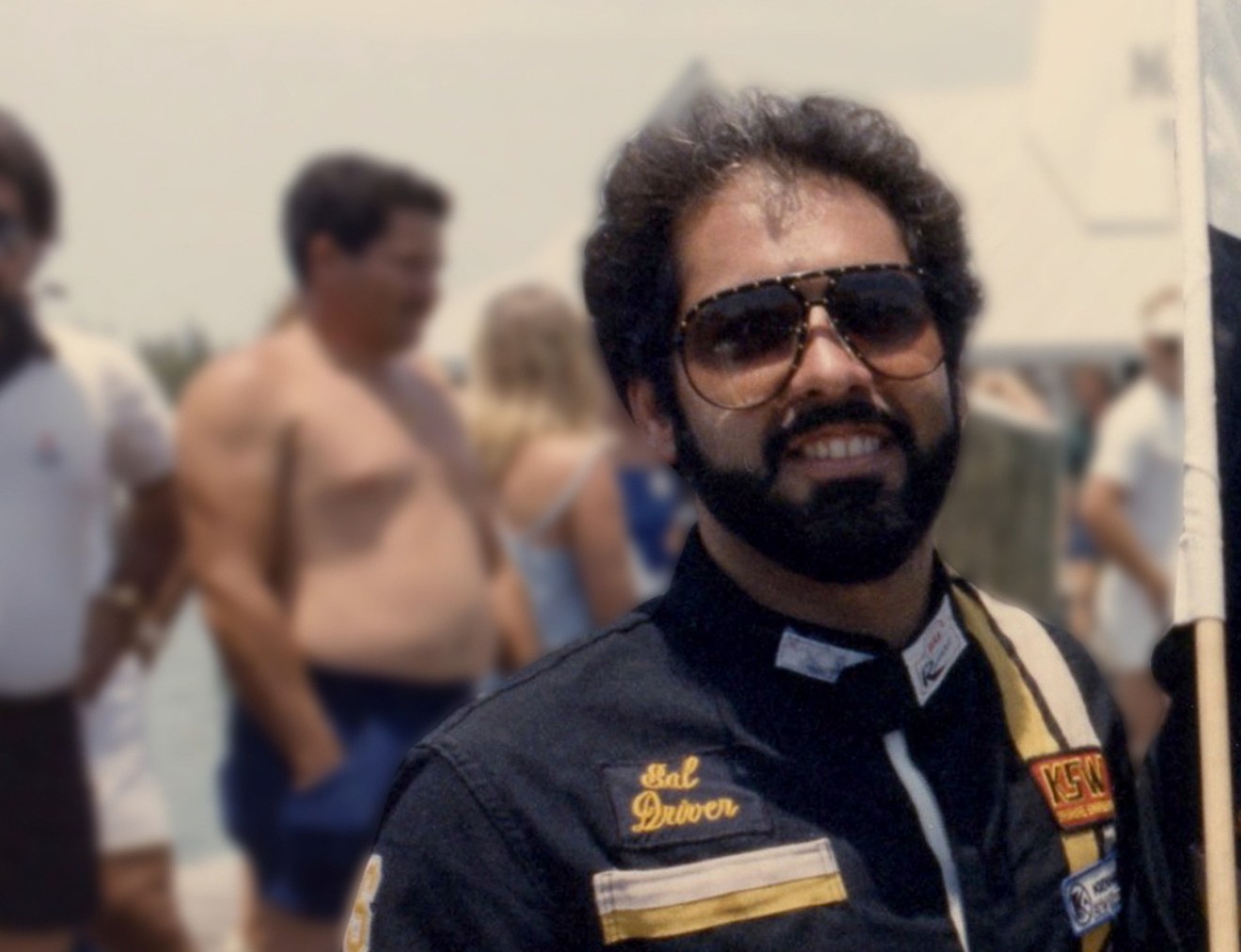 Sal Magluta in his powerboat racing days. Photo courtesy of Netflix
In the recently released six-part, narco-documentary Cocaine Cowboys: The Kings of Miami, Sal Magluta is portrayed during his prime in the 1970s and ’80s as a drug kingpin so rich, powerful, and conniving that he not only repeatedly flouted the justice system, but took on a mythological status as “Robin Hood” and a man who "walked between raindrops.”

But after being sentenced to 195 years in federal prison in 2002 for money laundering and obstruction of justice, the 66-year-old is described in court records and anecdotal accounts by family on social media as a shell of the person he once was, an elderly man now suffering from chronic kidney disease, Type 2 diabetes, ulcerative colitis, major depressive disorder, anxiety, and post-traumatic stress. His mental and physical health is said to be “rapidly deteriorating.”

After spending more than a decade in solitary confinement at the nation’s highest-security supermax prison, the ADX Florence in Colorado — a place that a former warden has described as a “clean version of hell” — Magluta has petitioned U.S. District Court Senior Judge Patricia A. Seitz in the Southern District of Florida for a compassionate release to home confinement with his 89-year-old mother, grown son, and grandchildren in the west Miami-Dade suburb of Westchester. The court is considering the motion.

“Salvador Magluta has spent decades enduring unthinkable punishment far surpassing what this Court could have contemplated when it first imposed his sentence almost twenty years ago. As a result of the conditions in which he has been incarcerated — namely, indefinite solitary confinement in the nation’s most brutal prison facility — he has been ‘render[ed] physically sick and mentally ill,’” reads the June 16 motion, which was written by Magluta's attorneys Richard Klugh, and Martin and Jane Raskin. “Further incarceration would be both excessive and inhumane.”

In the ’70s and ’80s, Willy Falcon and Sal Magluta are said to have smuggled and controlled 100,000 kilos of cocaine in Miami, operating a $2 billion enterprise. Whereas Falcon pleaded guilty to money laundering charges in 2003, Magluta took his case to trial. Though he was acquitted of murdering witnesses from an earlier trial, Magluta was convicted of money laundering and obstruction of justice and sentenced to the maximum for the nonviolent offenses: 205 years, which was later reduced to 195 years on appeal. Magluta has 145 years remaining on his sentence. He is not eligible for release until 2166.

Falcon, meanwhile, spent 14 years in prison before being released and deported to the Dominican Republic.

“[Sal Magluta] is deeply remorseful for his past actions, and he poses no danger to the community today. The government fails to recognize that decades have now passed, and Mr. Magluta has changed,” the motion states. “Mr. Magluta is not the same person that was previously before this Court. These years of incarceration have wrought damages to his body and mind, though unforeseeable at the time of his sentencing, that far exceed a just punishment for his crimes.”

The U.N.’s Special Rapporteur for Human Rights considers solitary confinement for more than 15 days a "form of torture." The Southern Poverty Law Center says solitary confinement of incarcerated individuals is “inhumane, ineffective, and wasteful,” and linked to higher rates of suicide than the general population.

According to Magluta’s motion, he has endured more than 20 years in solitary confinement, spending more than 22 hours a day in “a tiny, cement cell about half the size of a parking space...with only a sliver of sunlight through a small window.”

In 2013, Magluta was found to have two cell phones — including a black iPhone registered to Magluta’s cousin — in his cell. Other than that, his offenses while incarcerated have been extremely minor, such as a 2017 citation for keeping extra postage stamps in his cell.

The majority of the violations are related to Magluta keeping an untidy and cluttered cell, which attorneys say is a symptom of his deteriorating mental health. Since 2016, associate wardens at ADX Florence have reported at least eight times that Magluta was found to be “suffering from a serious mental illness” but stated that he would not be released to another institution based on the “risk of safety and security to staff and risk of escape.”

In March 2019, guards found Magluta eating a bag of medicinal pills; he was shackled and placed on suicide watch.

“Mr. Magluta’s mental health is now breaking under the strain of his brutal confinement,” the motion states. “Mr. Magluta is now manifesting symptoms of dementia and marked cognitive decline.”

Messages on social media, letters and visits to the Magluta family's addresses in Westchester, and calls and messages to Magluta's attorneys seeking comment were either not returned or declined. One source close to the case tells New Times that because the case is pending, they did not want to risk speaking to the media.

Cocaine Cowboys director Billy Corben, who has talked to Sal Magluta in prison over the past decade while working on the documentary, tells New Times that he has noticed Magluta’s mental health decline over the years. “He has good days and bad days,” Corben says.

The motion states that Magluta is “deeply remorseful for his past actions.” In a four-page, handwritten letter to Judge Patricia Seitz, Magluta writes in cursive that he accepts full responsibility for the crimes he committed, and is now seeking the court’s grace and mercy.

“I was never a father to my children, a son, nephew or cousin to my extended loving family. Never saw my children during their growing years, graduations, marriages, birth of grandchildren,” Magluta writes. “I would ask the Court to find some way that I can, under the terms of this court’s parameters, be used in any [fashion] to share my experience and the consequences of living outside of God’s will and the law.”
KEEP MIAMI NEW TIMES FREE... Since we started Miami New Times, it has been defined as the free, independent voice of Miami, and we'd like to keep it that way. With local media under siege, it's more important than ever for us to rally support behind funding our local journalism. You can help by participating in our "I Support" program, allowing us to keep offering readers access to our incisive coverage of local news, food and culture with no paywalls.
Make a one-time donation today for as little as $1.