Protesters gather outside the Marriott Fort Lauderdale Airport hotel where the Florida Board of Medicine held a meeting on August 5, 2022, to consider proposed rules to ban gender-affirming medical care for minors. Photo by Transinclusive Group
As Florida's LGBTQ community prepares for an imminent ban on gender-affirming healthcare for youth, social service agencies are getting an influx of young transgender clients who are scared. Many are worried they'll have to wait years to get the medical care they need, and are seeking appointments before the ban takes effect.

Ryan Papciak, a trans man and director of mental health services for Broward-based LGBTQ social services agency SunServe, says young people who have been waiting months to secure appointments with endocrinologists are feeling devastated that their long-sought goalpost has been moved even further away.

"I have a client who's 16 and they have been waiting for an endocrinology appointment since March, and had one coming up in December. Now they're being told the appointment is canceled, when they had essentially put their life on hold because they were looking forward to starting testosterone," Papciak tells New Times.

SunServe and other trans advocacy groups are responding to a recent vote from two Florida medical boards banning gender-affirming care for people under the age of 18.

According to Papciak, young trans patients take hormone blockers to delay the effects of puberty so that they and their families can have more time to come to a decision about whether or not they should partake in HRT or surgery to medically transition to the gender with which they identify. The medication, along with other forms of transgender care, is used in the treatment of patients with gender dysphoria — the psychological distress caused by a mismatch of someone's personal gender identity and their sex assigned at birth.

Florida's new rules on juvenile transgender treatment were posted online on November 14, triggering a 21-day comment period during which members of the public can request a hearing to oppose or request changes to the rules. Once the public comment process is complete, the rules are expected to go into effect early next year, if not sooner.

Since the rules were posted, Nicklaus Children's Hospital in Miami has shut down its Gender Program, the hospital's pediatric gender-affirming care clinic, reports the Tallahassee Democrat.

A spokesperson for the hospital did not respond to New Times' request for comment on Monday. A doctor involved with the Gender Program declined to comment when reached by New Times over the phone, deferring to the hospital spokesperson. The program's web page is no longer online, as of the morning of November 15. 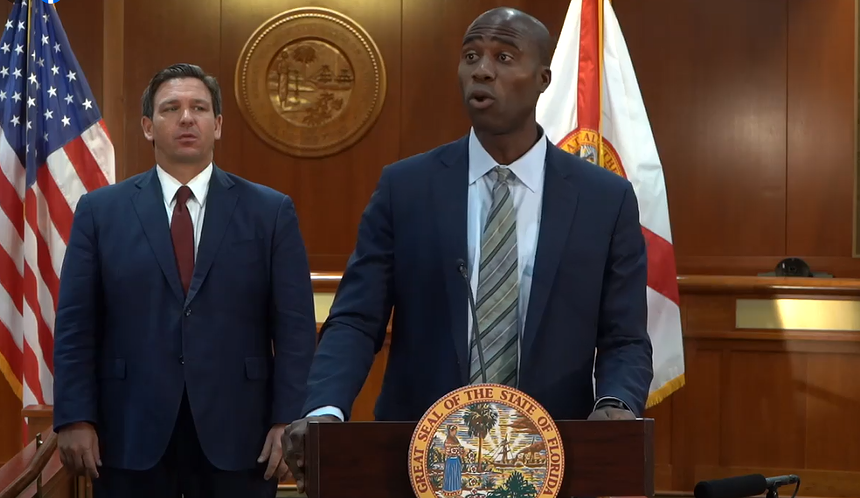 As opponents of the rules prepare to contest the upcoming ban, they've begun to focus on an apparent difference between the two medical boards' proposed new rules.

The Florida Board of Medicine, which governs MDs, or doctors of medicine, is proposing to ban the prescription of hormone blockers and HRT to minors outright.

But the Board of Osteopathic Medicine, which oversees licensed osteopaths (DOs), added a caveat in their proposed rule, which aims to allow their doctors to treat minors with gender dysphoria in clinical trials.

Their rule reads, in part: "Nonsurgical treatments for the treatment of gender dysphoria in minors may continue to be performed under the auspices of Institutional Review Board (IRB) approved, investigator-initiated clinical trials conducted at any of the Florida medical schools set forth in Section 458.3145(1)(i), Florida Statutes. Such clinical trials must include long term longitudinal assessments of the patients’ physiologic and psychologic outcomes."

James Lopresti, SunServe's founder, says the divergence between the two boards is only going to cause consternation among medical professionals, and will likely invite challenges.

"Imagine a hospital where you have MDs and DOs. Certain physicians will be allowed to do those studies, some won't. It's already leading to a lot of confusion," Lopresti tells New Times.

Lopresti says that SunServe and a number of other social service agencies and advocacy groups like The Alliance for LGBTQ Youth in Miami-Dade County and the Compass LGBTQ Community Center in Palm Beach County are already conferring and strategizing about how to combat the new rules, as well as the overall wave of anti-trans political action in Florida.

Florida Gov. Ron DeSantis has been at the forefront of controversial trans and LGBTQ-related legislation and politicking for the past two years. At least eight of the DeSantis-appointed members of the Florida Board of Medicine have donated to the governor's campaigns or political committee, according to the Tampa Bay Times.

Lopresti says that while other states have enacted legislation to ban juvenile transgender care, Florida is unique in that its medical boards are being used to prohibit gender-affirming treatment.

According to SunServe, some private practice doctors have already begun to cancel appointments for hormone treatment with young patients for fear of punishment from the state medical boards.

"Local endocrinologists are closing off their pediatric practices. It's becoming a trend of them not wanting to be in the state's crosshairs," Papciak says.

In the meantime, the staff at SunServe say they and other South Florida agencies are working to get patients and their families set up with doctors before the rules go into effect. Under the proposed language from both medical boards, young patients who are already undergoing hormone treatment when the ban takes effect can continue receiving said treatment.

Lopresti says SunServe is also working to connect patients with medical providers in other states who can prescribe hormone treatments through telemedicine.

Families looking for assistance with transgender healthcare can contact the agency at SunServe.org. Other resources for transgender youth throughout South Florida can be found at PrideCenterFlorida.org. 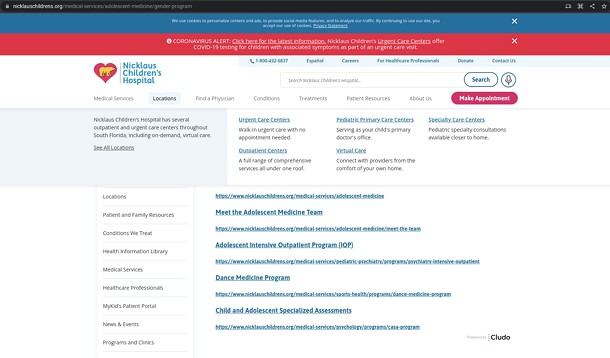 As of Tuesday, November 15, the web page for Nicklaus Children's Hospital's pediatric gender-affirming healthcare clinic is offline.
Screenshot from Nicklaus Children's Hospital Gender Program website
KEEP MIAMI NEW TIMES FREE... Since we started Miami New Times, it has been defined as the free, independent voice of Miami, and we'd like to keep it that way. With local media under siege, it's more important than ever for us to rally support behind funding our local journalism. You can help by participating in our "I Support" program, allowing us to keep offering readers access to our incisive coverage of local news, food and culture with no paywalls.
Make a one-time donation today for as little as $1.