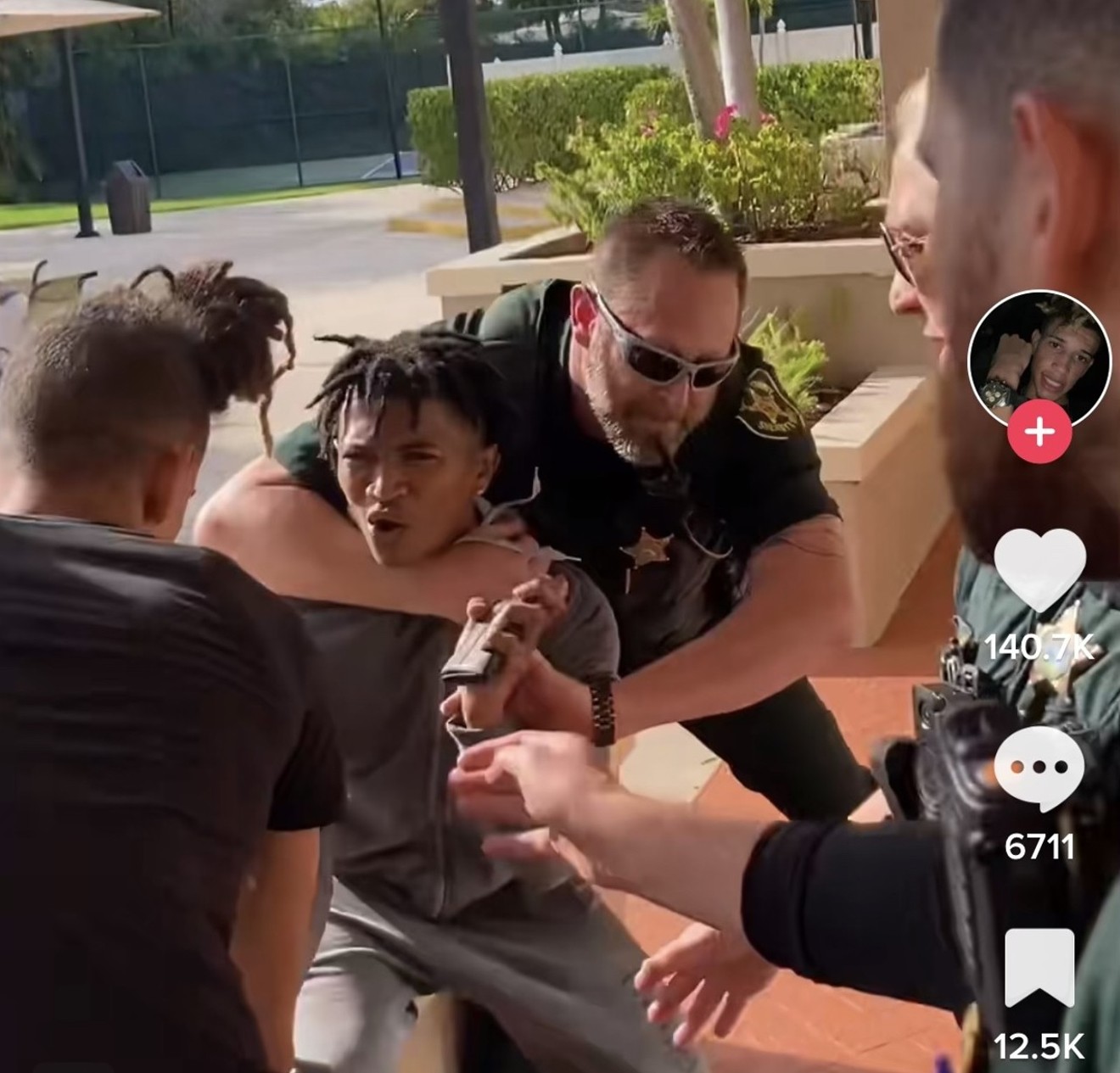 A BSO deputy put Khalil Pace in a chokehold and took him to the pavement outside Bonaventure Town Center Club. Screenshot of video by @floridajooka via TikTok
While sitting peacefully on a concrete planter in Weston after being detained following a supposed weed-smoking session, Khalil Pace was placed in a chokehold and slammed to the ground by a Broward Sheriff's Office (BSO) deputy.

In a TikTok video that captured the incident, BSO deputy Patrick Keegan is seen grabbing Pace around the neck when the 22-year-old discusses making a phone call and tries to hand his cellphone to a friend.

"What the fuck is that?" a witness screams. "Did you see what he did?"

Pace was held face down on the pavement while BSO slapped him in handcuffs during the December 22 incident. The sheriff's office booked him on charges of resisting arrest without violence and disorderly conduct.

"I just felt so hopeless in the moment," Pace tells New Times. "It really traumatized me."

"I've seen this happen so many times, and I honestly was in fear for my life," he says.

The conflict began when Pace and his friend were accused of smoking marijuana in a bathroom at the Bonaventure Town Center Club. The pair were meeting up with buddies at the gym for a workout and had paid to get in, according to Pace.

"One of the [employees] was like, 'Do you guys have a weed pen? You guys smell like smoke,'" Pace recounts. "We were like, 'No, we just went to the restroom to pee.'"

Pace says he and his friends were working out when the employee came over with two police officers, telling them they had to leave. He claims the employee chided them while they were being escorted out, saying, "That's why you guys shouldn't be smoking in the restroom. Don't come here anymore."

According to BSO, the deputies at the scene reported the "group was loud, argumentative, and caused a disturbance."

"One of them called the executive director [of the facility] a racist and yelled, 'Shut yo bitch ass up,'"  Veda Coleman-Wright, director of BSO's public information office, said in a statement.

Pace says BSO grabbed him and separated him from his friends in response to him allegedly mouthing off at the staff. He recalls telling his friends to be patient because he thought it was all going to end smoothly. They waited near Pace outside the building while he sat in front of Keegan, who ordered them to stay back and keep a few feet away from Pace.

"I am thinking that when the rest of the police come, they will hear me out and realize that this situation isn't as big as how it's being made out to be," Pace adds. "We never did anything but that is not how it ended up going."

Pace says that even though he paid to enter the gym and complied when he was asked to leave, the deputy advised him he was being detained for trespassing.

"He kept saying he was going to charge me with trespassing," Pace says. "There's nothing I could do so I needed to call my mom to let [her] know that I am about to get locked up."

But Pace claims Keegan told him he could not call anyone. Pace disagreed, saying it was within his rights to do so. Still seated, he tried to hand his cellphone to a friend.

That's when the deputy pounced, violently pulling him to the ground.

The 22-year-old was transported to jail and spent the day behind bars. The charges are listed as "unfiled" in the county docket, meaning state prosecutors may not have made a decision on whether to pursue the case. Pace's group received permanent trespass warnings, which bar them from returning to the gym, per BSO.

Pace, who lives in Coconut Creek and is trained as a welder, says he thought the deputies were going to act professionally and handle the situation "maturely as grown men."

"I didn't expect to be slammed," Pace says.

Coleman-Wright said BSO's Weston district office is aware of the video, which has amassed more than a  million views on TikTok.

"Per BSO policy, district command and training division are already reviewing the arrest to determine if the force used was consistent with agency training and policy," Coleman-Wright noted in the statement.

Deputy Keegan has worked on the force since 2002, according to BSO.

This isn't the first time BSO deputies have been accused of excessive force after videos of their actions went viral on social media.

In 2019, two deputies were charged with battery after they were were recorded pepper spraying then-15-year-old Delucca Rolle and smashing his face into the ground outside a McDonald's in Tamarac. One deputy had his charge dismissed, while the other was exonerated at trial this past July.
KEEP MIAMI NEW TIMES FREE... Since we started Miami New Times, it has been defined as the free, independent voice of Miami, and we'd like to keep it that way. With local media under siege, it's more important than ever for us to rally support behind funding our local journalism. You can help by participating in our "I Support" program, allowing us to keep offering readers access to our incisive coverage of local news, food and culture with no paywalls.
Make a one-time donation today for as little as $1.