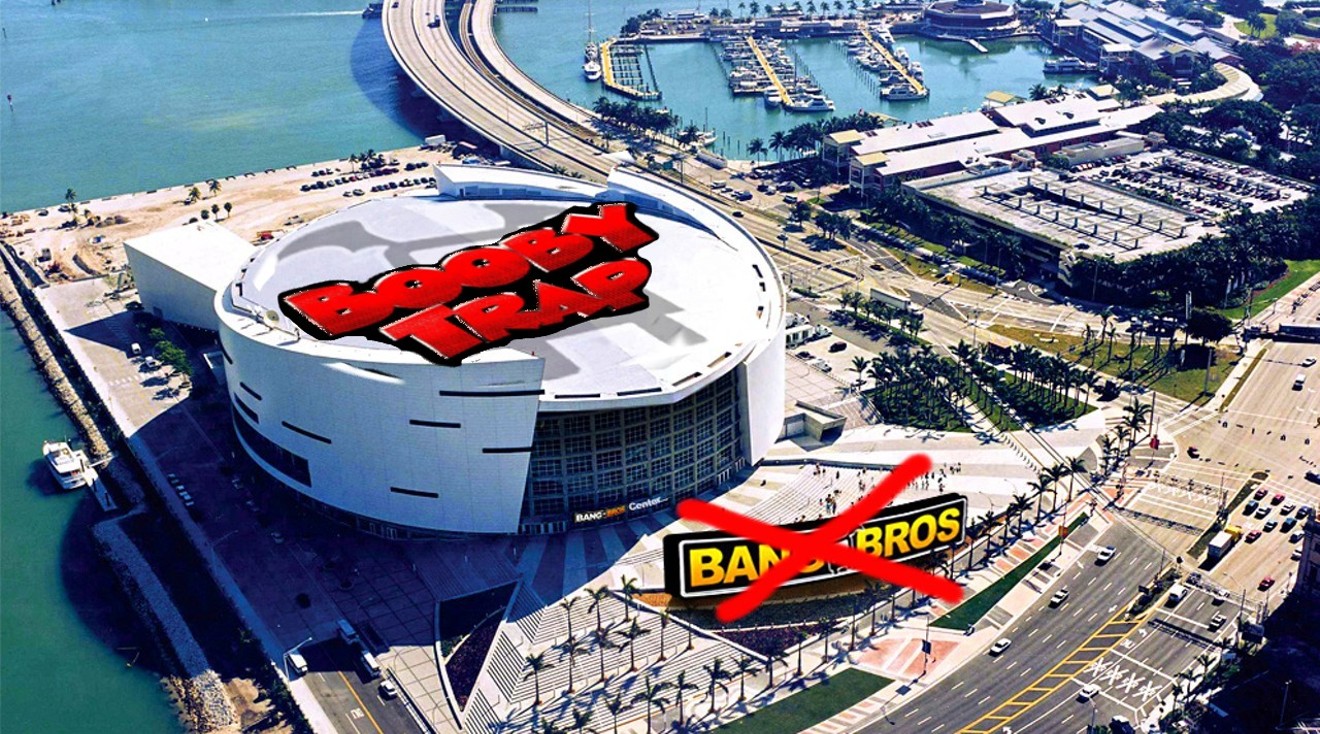 Booby Trap Arena or BangBros Center? New Times photo-illustration (Booby Trap via Facebook/BangBros photo via Mike Ehrmann via BangBros)
Imagine – it's the year 2023, and you're going to watch your hometown basketball team, the Miami Heat, play at their beloved downtown arena: the BangBros Center.

Though it feels more fit for a comedy sketch than real life, the prospect of a BangBros Center is not that far-fetched in Miami following the downfall and bankruptcy of FTX CEO Sam Bankman-Fried's cryptocurrency empire. On Friday, Miami-Dade County and the Miami Heat swiftly pulled out (pun intended) of their partnership with FTX, the erstwhile namesake of the downtown arena owned by the county.

In typical Miami fashion, the unfolding saga has grown more absurd by the day.

Owner Gregg Berger wrote via Instagram DM that Booby Trap, which owns a handful of strip clubs across Miami and Pompano Beach, made a $5 million offer to rename the venue "Booby Trap Arena."

"We are a staple in Miami," he wrote, "and we think the fans would be behind the idea."

A post shared by Booby Traps Of South Florida (@boobytrapsofsouthflorida)

It remains to be seen whether the county is aroused by either offer. News of the strip club's bid was first reported on November 16 by the blog SportsGossip.com.

Previously known as American Airlines Arena, the facility was renamed FTX Arena in June 2021 per a 19-year, $135-million sponsorship agreement between the Bahamas-based crypto exchange company and Miami-Dade County.

“Miami-Dade County and the Miami Heat are immediately taking action to terminate our business relationships with FTX, and we will be working together to find a new naming rights partner for the arena," the statement reads.

The naming rights contract between the county and FTX includes penalties of $16.5 million – plus the costs to remove the signage and decorations – in the event the company is unable to fulfill the contract.

The $32 billion empire known as FTX was launched in 2017 by Bankman-Fried, a 30 year old who has been called a “modern-day J.P. Morgan.” Before its collapse, the outfit had grown into the third-largest crypto exchange in the world by volume.
KEEP MIAMI NEW TIMES FREE... Since we started Miami New Times, it has been defined as the free, independent voice of Miami, and we'd like to keep it that way. With local media under siege, it's more important than ever for us to rally support behind funding our local journalism. You can help by participating in our "I Support" program, allowing us to keep offering readers access to our incisive coverage of local news, food and culture with no paywalls.
Make a one-time donation today for as little as $1.