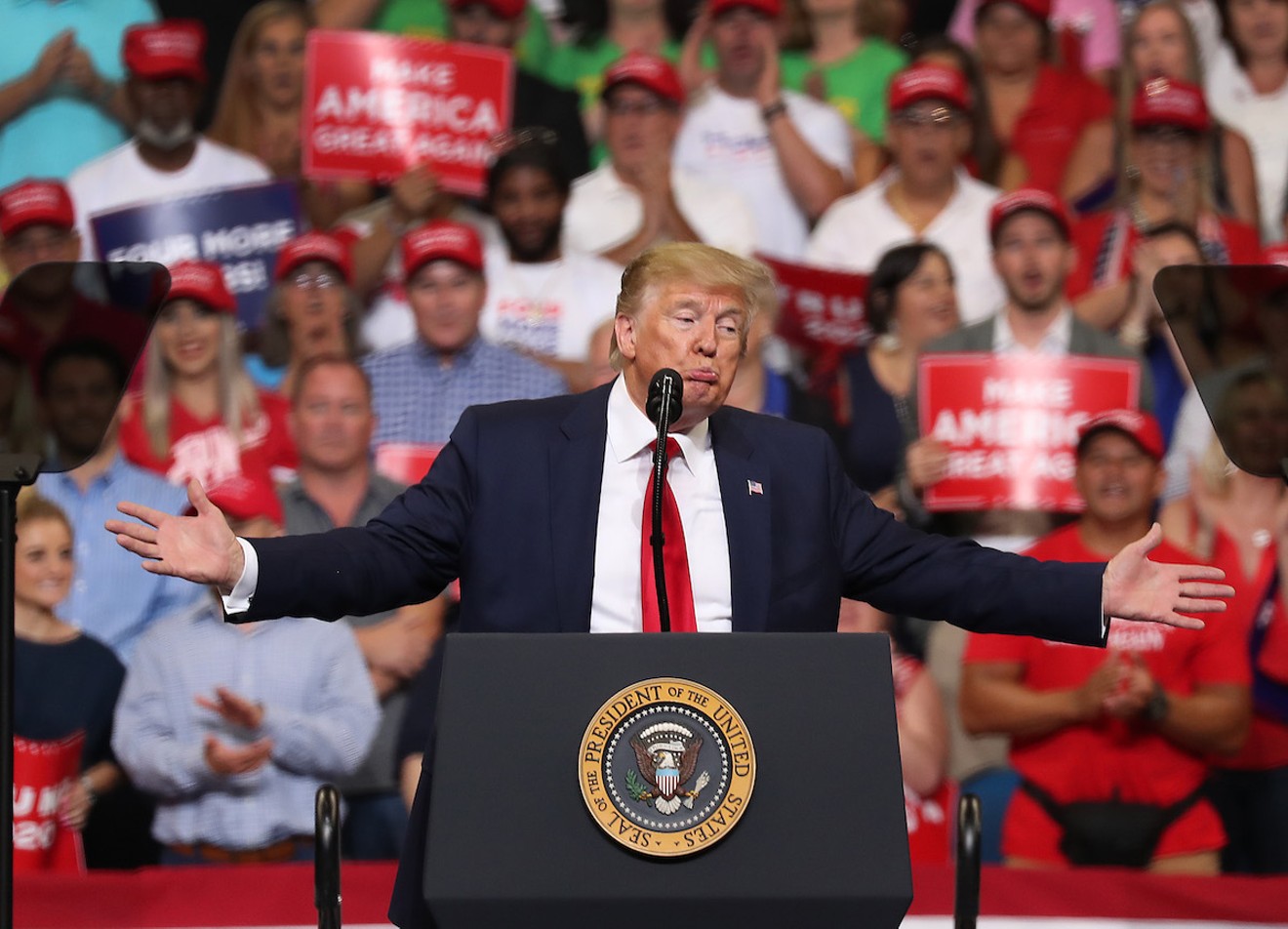 President Donald Trump announced his candidacy for a second presidential term at Orlando's Amway Center. Photo by Joe Raedle / Getty Images
President Donald Trump's first 2020 campaign rally in Orlando last night was little more than a rehash of his 2016 greatest hits. He stood at a lectern and let various English-adjacent sentences tumble from his swollen, bass-like mouth. Various neofascist groups showed up to chant stuff outside, and TV news channels ran wall-to-wall coverage of Trump babbling and saying "fake news" over and over again.

But last night reignited one of the weirdest stories of the Trump era: that of Miami's Maurice "Michael the Black Man" Symonette, a former member of the murderous Yahweh ben Yahweh cult who mysteriously appears directly behind Trump at nearly every major campaign rally.

In 1990, federal prosecutors infamously charged Symonette with conspiring to commit two murders, and Symonette's own brother testified in court that Symonette had helped beat one man who later died and had poked a stick through the eye of another person. But a jury eventually acquitted Symonette. In the years following the case, he was charged with grand theft auto, carrying a weapon onto an airplane, and threatening a cop, but he each time he beat the rap. He then, of course, entered politics as "Michael the Black Man," an anti-Democratic Party protester who hung out with Rick Santorum and occasionally appeared on cable news.

Nowadays, Symonette doesn't just drive around to local Trump rallies in Florida. He turns up all over the country, including at the Arizona border with disgraced, racist Sheriff Joe Arpaio in 2018. Symonette also bizarrely appeared at a Miami campaign rally that was, according to Special Counsel Robert Mueller's office, funded by Russian agents.

Symonette turned up again, yesterday at Trump's rally, and most likely will be following the president around the country once more if history is any indication. In Orlando, Symonette and his team of "Blacks for Trump" supporters apparently were fronting some sort of band outside the rally and performing "Play That Funky Music White Boy" for whatever reason:


This band is playing downtown near the #TrumpRally at Amway Center, wearing T-shirts that say “Blacks for Trump.” The song: “Play That Funky Music, White Boy.” Lotsa fans of Wild Cherry in the crowd apparently pic.twitter.com/USXJzQASvO

Then came the rally. Once again, Symonette was visible on television — only this time, he was missing his characteristic "Blacks for Trump" sign and corresponding shirt. (His materials used to link to a deranged-seeming website called Gods2.com, which accused Hillary Clinton of being tied to the Ku Klux Klan, along with other general nonsense.) Last night, he and his team instead wore T-shirts emblazoned with the slogan "Four More Years." Symonette himself held a "Trump 2020" sign:

But there's an even more bizarre piece to the story: Symonette in May 2018 filed for bankruptcy and claimed he was flat broke. He was later banned from bankruptcy court for five years after a judge claimed he was abusing the system in order to skirt creditors who said Symonette owed them money. The filings raise major questions about who might be funding Symonette's constant trips to Trump rallies. If you happen to know anything more about his potential connection to Trump, send us an email.
KEEP MIAMI NEW TIMES FREE... Since we started Miami New Times, it has been defined as the free, independent voice of Miami, and we'd like to keep it that way. With local media under siege, it's more important than ever for us to rally support behind funding our local journalism. You can help by participating in our "I Support" program, allowing us to keep offering readers access to our incisive coverage of local news, food and culture with no paywalls.
Make a one-time donation today for as little as $1.