Ex-Cult Member Behind "Blacks for Trump" Is Bankrupt, So Who's Paying for His Trump Rally Trips? 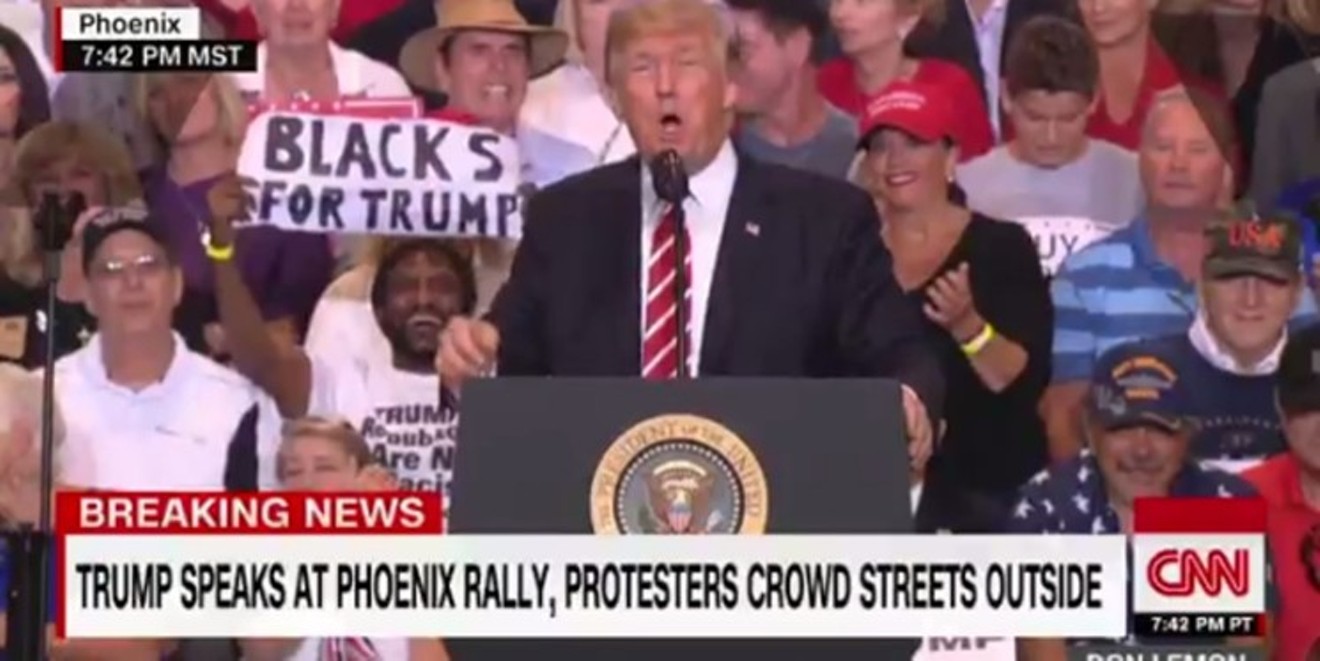 CNN
At President Trump's rally in Tampa last week, a familiar face made it back in the national news. Maurice Symonette, also known as Michael the Black Man, was front and center in a crowd hurling invective at CNN reporter Jim Acosta, waving a "Blacks for Trump" sign. Symonette has been a regular at Trump rallies all over Florida and as far away as Arizona. Just last month, he popped up at the U.S. border to appear in a video with disgraced sheriff-turned-pardoned-Senate-candidate Joe Arpaio.

All that national exposure raises an obvious question: Who is paying the bills for Symonette, a former member of Miami's murderous Yahweh ben Yahweh cult, to represent "Blacks for Trump" at Trump rallies?  Since Blacks for Trump isn't a registered political organization with the Florida Division of Elections or the Federal Election Commission, there are no public records of any donations funding the group's operations.

It seems unlikely Symonette is fronting the cash for his travel himself because he filed for bankruptcy this past May. In federal court records, he reports that he's unemployed, generates no income, and has $0 in the bank. He also says four banks have staked claims on $2.9 million worth of property around Dade County.

So how is he getting to Arizona and Tampa to stand behind Trump on national TV?  Reached on his cell phone, Symonette declined to discuss his group's financing. "You guys are horrible racists," he said. "You are lawbreakers and you're mean... God is going to punish you horribly."

Throughout the '80s, Symonette — then known as Maurice Woodside — was a devoted follower of Yahweh ben Yahweh, a charismatic preacher who wore white robes and called himself the Messiah. Federal prosecutors later accused Yahweh, whose real name was Hulon Mitchell Jr., of ordering his followers to murder at least 14 people, including random white vagrants who were massacred as an initiation rite.

Symonette was charged in federal court along with Mitchell and 15 other followers in 1990; while the cult's leader was later convicted of 14 charges of murder conspiracy and served nearly two decades in prison, Symonette and six other cult members were acquitted.

In the decades since, Symonette has been charged with crimes including grand theft auto, carrying a weapon onto an airplane, and threatening a police officer, but has never been convicted. (He does have a pending case on a municipal ordinance charge in Hollywood after police showed up to a really loud party he threw.)

Since Trump's election, Symonette has carved out an unlikely new niche as one of President Trump's most visible African-American supporters. He has a knack for getting prime placement directly behind Trump and has handed out hundreds of his "Blacks for Trump" signs. They advertise his website, which is full of conspiracy theories about Cherokees running the U.S. banking system. (Really.)

Symonette was even featured at a Miami Trump rally that prosecutors later alleged had been funded by Russian nationals looking to disrupt the election.

Symonette filed for Chapter 7 bankruptcy on May 16, listing Washington Mutual, Homecomings Financial, HSBC Bank, and Indymac Bank as his creditors; each institution laid claim to one of four houses. Three are in North Miami-Dade County, and one is near Kendall.

In court docs, his only listed assets are clothing, watches, various household items, and a pool table. He does say that his live-in girlfriend, whom he doesn't identify by name, provides him with $2,000 per month.

Could that money from his significant other cover Blacks for Trump's various trips around the country to support the president on TV? Symonette wouldn't discuss that with a New Times reporter.

Instead, he spoke at length about his belief that the banking system is corrupt. He added that "Trump being the president is the greatest blessing we have ever had."

In his bankruptcy case, he's repeated those allegations about the banking system being crooked to Judge Laurel M. Isicoff. He's also repeatedly sought to change hearings that overlapped with Trump events. Symonette suggested the scheduling conflicts are a sinister plot to keep him away from the spotlight at Trump rallies.

"Creditors know that I have a rally in Arizona on July 25 and deliberately set the hearing on that date to cause me and my musical band to miss the performance and the rally with the bus we rented," he wrote in a motion filed the same morning as the Phoenix rally. "The creditors overheard that at the house we are disputing... and set that hearing on the same date just to harm me."

That motion was denied, as was another he filed on July 30, just before Trump's Tampa rally. "As founder of Blacks for Trump, (I) have rented vans to go to Trump's rally. We need to make the country aware how the banks (FOREIGNERS FROM THE EAST) are illegally taking WHITE AND BLACK PEOPLE'S houses away."
KEEP MIAMI NEW TIMES FREE... Since we started Miami New Times, it has been defined as the free, independent voice of Miami, and we'd like to keep it that way. With local media under siege, it's more important than ever for us to rally support behind funding our local journalism. You can help by participating in our "I Support" program, allowing us to keep offering readers access to our incisive coverage of local news, food and culture with no paywalls.
Make a one-time donation today for as little as $1.