Al Crespo at home in 2013 Photo by Carlos Miller
A rehabilitated bank robber who spends his golden years schooling rookie and veteran news reporters on exposing corruption in the Magic City: It sounds like the plot of a riveting fictional television drama.

But that's the real life story of Charles Albert Crespo, a citizen journalist and civic crusader who spent more than a decade authoring thoroughly investigated takedowns of ethically stunted public servants in Miami and surrounding cities. With a gift for acidic prose saltier than the waters of Biscayne Bay, Al — as friends and foes alike knew him — was Miami's moral compass from the moment he launched his blog, the Crespogram Report, in 2010.

On August 16, Al died at his home in Miami Shores. He was 80. The cause was an undisclosed case of inoperable liver cancer.

Roger Craver, one of many Miami locals whose admiration for Al developed into a genuine friendship, was among the last to spend time with him. Craver, who now lives in Martha's Vineyard, visited Al a month ago and stayed in touch with him on a daily basis thereafter. "He maintained his spirit and sense of outrage all the way to the end," Craver tells New Times. "He died as he lived: wanting to tell people what he thought."

Born in Havana, Cuba, on December 24, 1941, Al was the last of two direct descendants of the earliest families to settle in Key West in the 1800s, according to an online obituary Craver authored. Al's rebellious streak ran in the family. His grandfather, Pablo Crespo-Pérez, was a decorated Cuban revolutionary who fought in the Spanish-American War.

Marc Caputo, an NBC News national politics reporter and Miami Herald alum who grew up in Key West, says the Crespos are well known in the Conch Republic. "He still had that bit of a conch accent whenever I spoke to him," Caputo said. "He reminded me of the old guys from home."

It would take some time for Al to channel his virtuous rage for the forces of good. In 1959, shortly before he turned 18, he was involved in an attempted armed robbery: He was the getaway driver while two of his friends held up the clerk at the Last Chance Motel in Miami Beach with toy guns. He was arrested and served a year in prison.

The Miami-Dade criminal justice system slapped Al with another one-year prison term following his bust for breaking into a car. That led to another two years when he escaped county lockup, according to a February 25, 2020, Crespogram post.

Al took his criminal escapades north to Ohio, where he robbed banks, jewelry stores, and a motel. He earned himself 30 years to life in the Buckeye State's penal system for robbing a savings and loan. After he'd served a decade, his sentence was commuted.

Al figured his talents were perfectly suited for a career in politics.

But he lost his bid for the Ohio Democratic Party nomination for state representative, then resumed sticking up banks. He was arrested and charged for his last robbery in Connecticut, where he served time from 1975 to 1984. (He served part of that time in the federal pen, he recounted, "after the warden in Connecticut suggested to the parole board that it would be best if they got rid of me for 'the betterment of the institution,' because even though he had me locked up in maximum security I still managed to write and smuggle out stories about conditions in his prison.")

Freed at last, Al spent the remainder of his life as a renaissance man, building careers as a freelance television commercial and music video producer, as well as a hard news photojournalist. His photography work put Crespo on the front lines of America's protest movement in the late 1990s and early 2000s. His images of social unrest turned into a critically acclaimed book of photos and essays, Protest in the Land of Plenty. 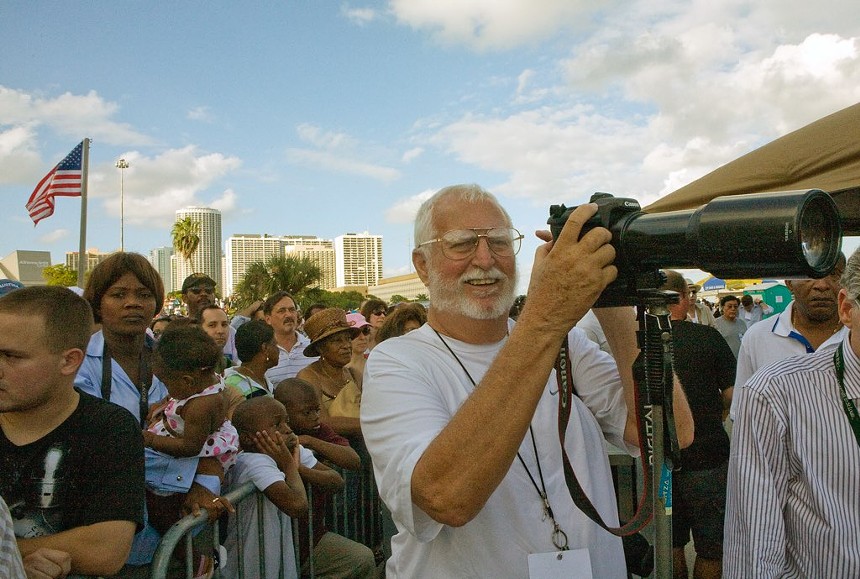 Al Crespo at a 2008 rally for Barack Obama in Miami
Photo by Carlos Miller
During a skirmish Al covered at the 2000 Democratic National Convention in Los Angeles, cops shot him in the head with rubber bullets, according to Craver's obit. Following that incident, Al was the American Civil Liberties Union's lead plaintiff in a civil rights lawsuit that set new guidelines for how police deal with journalists during protests and demonstrations.

Carlos Miller, a fellow photojournalist and occasional New Times contributor who founded the blog Photography Is Not a Crime, first heard about Al during meetups with local shooters in 2004. "They would all talk about Al," Miller says. "He was already a legend."

In 2007, City of Miami police officers arrested Miller for obstructing traffic after becoming irritated that he wouldn't stop photographing them while they were questioning an individual on Biscayne Boulevard. The incident motivated Miller to launch his website, now known as PINAC News, which focuses primarily on exposing police misconduct and corruption, as well as advocating for people's right to video-record police officers.

Al was among Miller's early supporters. "Al gave me a $50 donation at a fundraiser after I had been arrested and when PINAC was only weeks old," Miller says. "I always appreciated that because I knew he was on a budget."

In 2010, Al dove into Miami's blogosphere when then-Miami Mayor Tomás Regalado fired the city's film office coordinator and replaced him with a political crony, Craver writes in his obit. From that moment, Al found his voice as the potty-mouthed blogger who showed no fear in calling out local government officials and exposing their malfeasance. He also mastered gaining access to public documents and sharing them with his audience — as well as with journalists willing to brave his acerbic personality and work alongside him.
click to enlarge 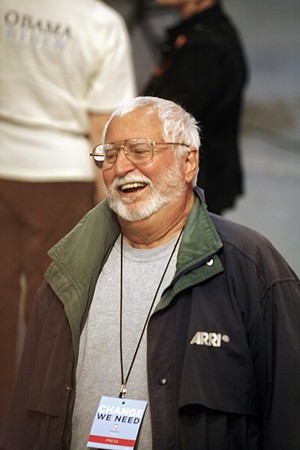 Al Crespo at a rally for Barack Obama in 2008
Photo by Carlos Miller
Melissa Sanchez met Al the year he launched his blog. At the time, Sanchez, now a Chicago-based reporter at ProPublica, had just begun her new job as the City of Miami beat reporter for El Nuevo Herald, the Spanish-language sister to the Miami Herald. "I was really drawn to him and fascinated by his background," Sanchez says. "A lot of the stuff he wrote about was sometimes mean-spirited and difficult for some of my colleagues at the Miami Herald to swallow. But I worked for El Nuevo. I spent a lot of time with him."

During her four-year stint with El Nuevo, Sanchez recalls regularly meeting Al at his Miami Shores condo to go over stories they were working on over cups of coffee. "I introduced him to other Spanish-language reporters and they all liked him," Sanchez recounts. "He always treated us with respect, which is not something we always got from English-speaking [journalists]. He had high standards for journalists in rooting out corruption."

In November 2020, Crespo announced he was retiring from blogging and was going to focus on developing a treatment for a television series based on the dysfunctional Miami city government. According to Craver, the working title is the tagline Al used to end many of his stories: "It's Miami, bitches!"

Al kept his diagnosis private and sporadically posted new stories on the Crespogram, including a series of posts in September 2021 about a Miami Shores cop who shot and killed a mentally ill woman who was holding a pellet gun.

"When you lose someone like Crespo, you realize how few people there are like him in this community," Miami documentarian Billy Corben tells New Times. "And you realize how desperately we needed him and need more people like him. That makes him irreplaceable."

"I can't tell you how much everyone in Miami who cares about good government, transparency, and accountability will miss Al Crespo," Corben shared on Twitter upon learning of Al's death. "Bank robber turned filmmaker turned local blogger, public records crusader, and our greatest gadfly."

Roger Craver relayed that in lieu of flowers, Al requested that everyone vote at every opportunity: "Evil and corruption exist not only in Miami but throughout the nation, and the votes of caring citizens is democracy's best protection."

Al Crespo will be laid to rest in the historic Key West Cemetery alongside other members of his family.

Click this link to read tributes to Al shared by Miami locals and expats.
KEEP MIAMI NEW TIMES FREE... Since we started Miami New Times, it has been defined as the free, independent voice of Miami, and we'd like to keep it that way. With local media under siege, it's more important than ever for us to rally support behind funding our local journalism. You can help by participating in our "I Support" program, allowing us to keep offering readers access to our incisive coverage of local news, food and culture with no paywalls.
Make a one-time donation today for as little as $1.