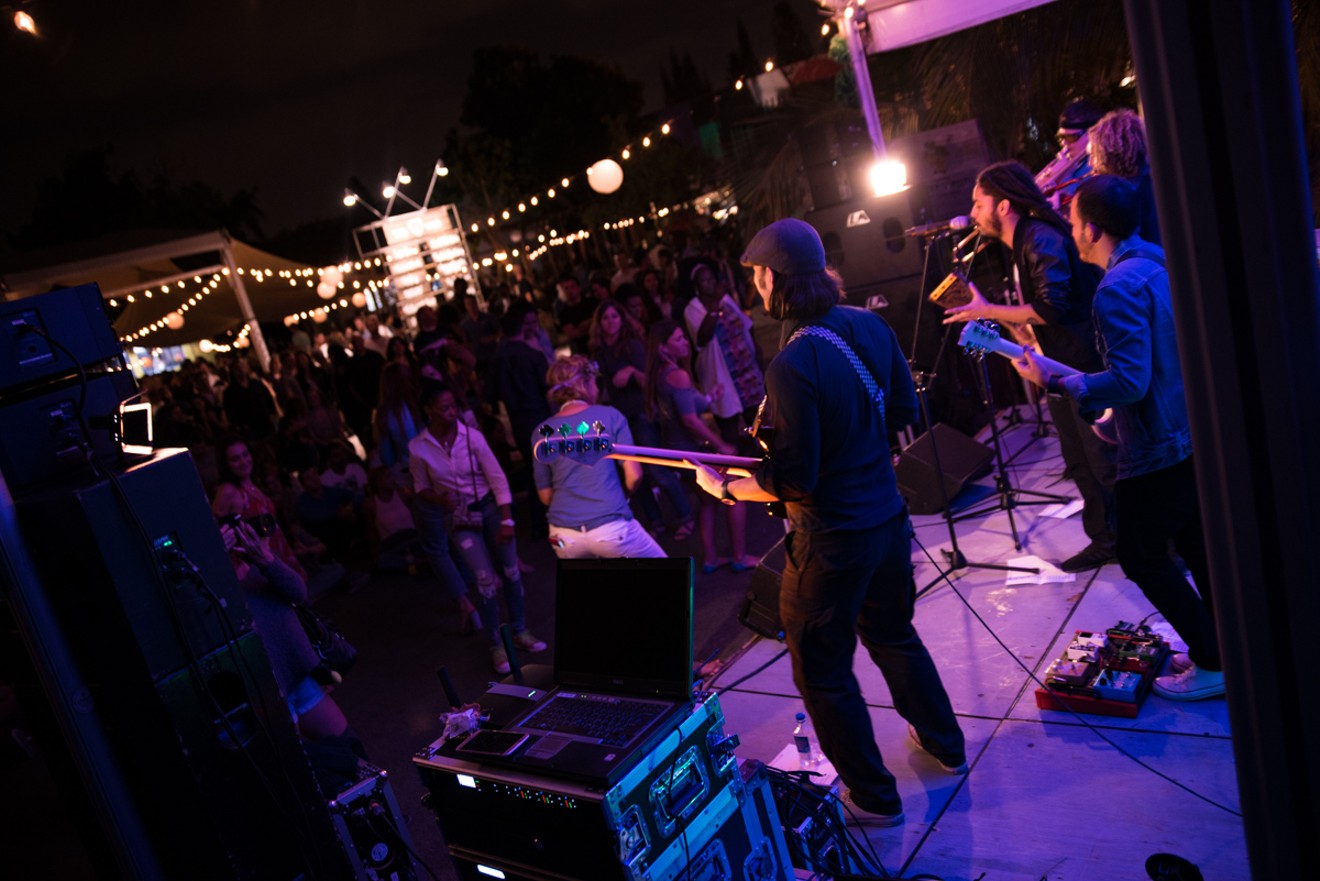 The Wynwood Yard stage has been home to both local, up-and-coming talent and world-famous superstars. Photo by Amadeus McCaskill
People love to complain there's no music scene in Miami. But the truth is that the city is brimming with musical talent, from jazz to rock to Latin to R&B and electronic. Head to Churchill's Pub or Luna Star Cafe and you'll find plenty of raw talent. But where can artists play once they've outgrown holes in the wall? By this time next year, the Wynwood Yard will no longer be an option. News broke yesterday that the community hub — along with the neighboring theater, O Cinema — will close in spring 2019 to make way for yet another likely unaffordable apartment complex.

During its less than three-year run, the Yard has belied the idea that Miami's music scene is anemic. From World Music Tuesdays and Reggae Sundays to recurring DJ and jazz nights, live music is a part of the curated experience at Wynwood Yard. It's home to a monthly residency by beloved local folk singer Keith Johns and regularly hosts America's Got Talent powerhouse Yoli Mayor. And famously, when Shakira and Chris Martin of Coldplay sought an intimate venue away from arenas and stadiums, they chose the Yard. It's been a rare thrill for Miami to claim a venue that can accommodate both superstars and up-and-comers. The closure of the Yard — one of the few midsize music venues in a city desperately in need of them — is yet another stumbling block for musicians looking to stay and thrive in Miami.

It's no wonder skilled musicians often leave Miami for Nashville, Austin, New York, Los Angeles, Seattle, and Portland. Where do you go when you outgrow small bars and find that the best-paying shows are cover gigs in Miami Beach? There's a significant artistic jump to be made between packing Churchill's on a Tuesday night and filling the Ground — at the moment one of the better midsize places in town — on a Thursday, Friday, or Saturday night. Since opening in 2015, the Wynwood Yard seemed destined to be that transitional venue — a artists could work toward.

It's not totally hopeless. Las Rosas has recently stepped into an important role as a valuable starter venue for hopefuls, and Kill Your Idol retains that role in Miami Beach. Plans for a Wynwood Yard offshoot in North Beach are ongoing, and the Wynwood location's closure offers an opportunity for venues such as Gramps and 1306 to step up to the challenge of presenting rising local talent. But these venues need time to grow into an icon such as Churchill's, which celebrates its 39th anniversary this week.

Sadly, the Yard won't get that kind of time. And if we keep razing venues in favor of condos, this unsustainable model and its resulting musical brain drain will continue. After all, what incentive do these artists have to stay and create here? The ones who've made their home on the Wynwood Yard stage likely won't be able to afford to live in one of the apartment units that will soon take its place.
KEEP MIAMI NEW TIMES FREE... Since we started Miami New Times, it has been defined as the free, independent voice of Miami, and we'd like to keep it that way. With local media under siege, it's more important than ever for us to rally support behind funding our local journalism. You can help by participating in our "I Support" program, allowing us to keep offering readers access to our incisive coverage of local news, food and culture with no paywalls.
Make a one-time donation today for as little as $1.