Wu-Tang Clan's RZA: III Points 2020 Will Mark "a New Display of Our Creativity and Talent" 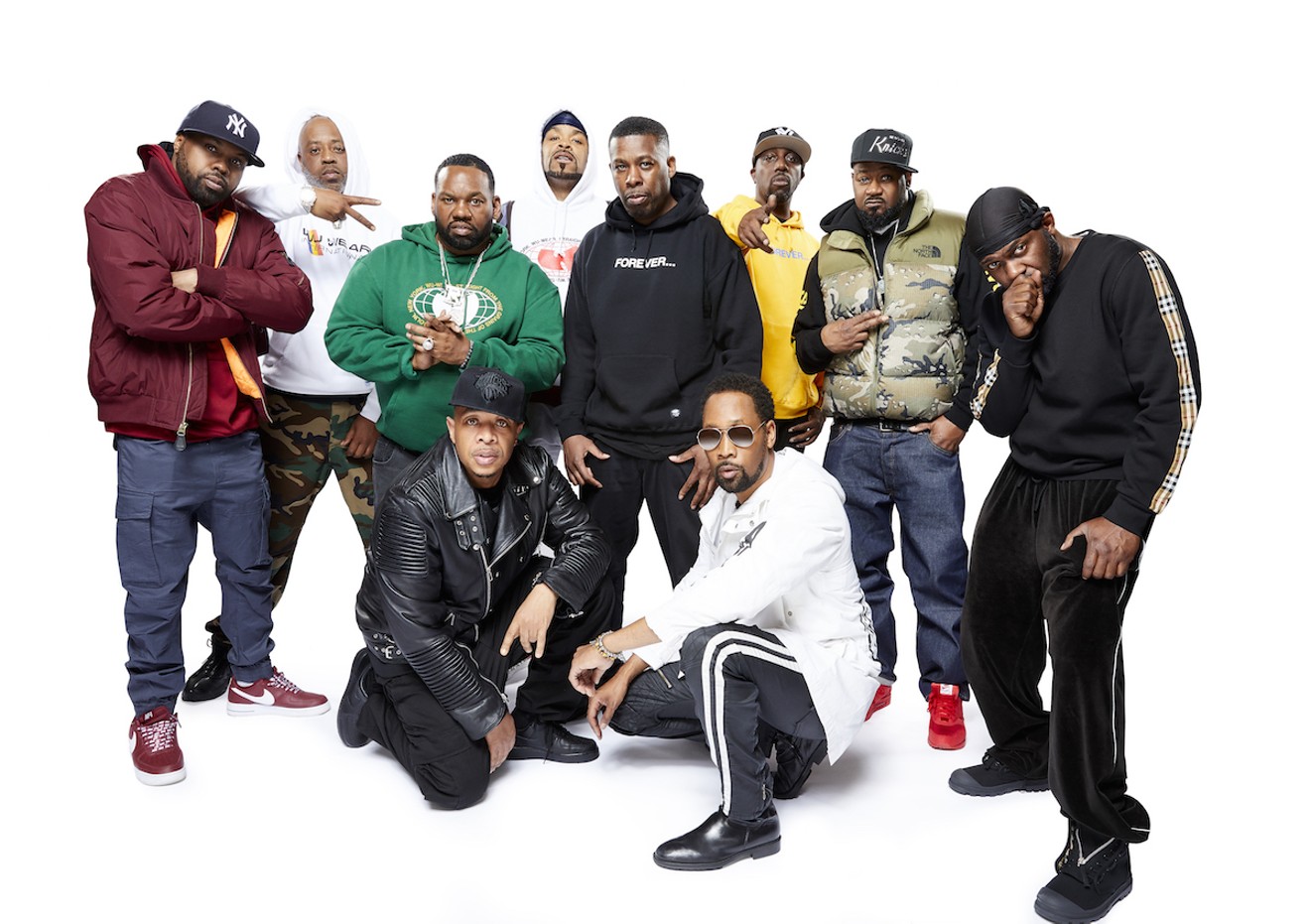 Wu-Tang Clan Photo by Kyle Christy
RZA's last great Miami memory includes a potent mixture of weed, '70s kung fu flicks, and tequila shots till sunrise. It was April 2018, and the Wu-Tang Clan figurehead had come to town to headline III Points' annual 4/20-themed event, III Joints. For his performance, RZA crafted a live hip-hop soundtrack to The 36th Chamber of Shaolin, a Hong Kong cinema classic and seminal text in the Wu canon. It was half rap concert, half film screening, and all serious smoke-out.

“Everybody was really smoking and sippin',” RZA remembers. “There was moments where the audience was just engaged by what was on the screen, but there was moments where the audience gave in to the hip-hop performance that was happening, jumping up and down, throw your hands up in the air [stuff]. That was a very unique experience: outdoors, Miami, and the weather was beautiful.”

When III Joints wrapped, RZA and crew took the party to the downtown Miami nightclub Floyd. Shortly after joining Call Super — the DJ visiting that night — behind the booth, the rapper, producer, and all-around creative force let the Miami spirit take over, found a mike, and began MC'ing over the house mix bumping through the venue. Soon enough, dancers were being invited up for free tequila shots from Bobby Digital himself.

“I definitely was pouring a lot of shots into a lot of glasses,” he recalls. “One thing about me: When I party and I get loose, I just go with the flow.”

Things will undoubtedly flow once again come May, when the full Wu-Tang Clan will join RZA for a headlining set at III Points' full-fledged music festival. The Clan is preparing to mark the start of the 2020s as a new era for the group and will arrive in Miami armed with a whole new set list and stage production.

It's a welcome return: Since 2015, a member of Wu-Tang has played at least one III Points event per year. Ghostface Killah was the first to come through in 2015, followed by a hyped-up performance from Method Man and Wu affiliate Redman in 2016. III Points brought the full Clan through for a standalone concert during Art Basel 2017 and then called upon RZA for the 2018 edition of III Joints. Last year's festival saw a return from Ghostface, joined by Raekwon for a full performance of the 1995 classic Only Built 4 Cuban Linx...

“I mean, we love Miami, right?” RZA says. “It's always iconic to go there; we get that good Cuban food. Usually I don't eat until after the show, but I eat twice before the show [in Miami]. When invitations come from that city, we're trying to RSVP. If you guys want us to come, we want to come, and that's what we do.”
Wu-Tang Clan's last performance in Miami was heavy on songs from the group's seminal 1993 debut LP, Enter the Wu-Tang (36 Chambers).

“It was sold-out to capacity,” RZA recalls, “and the energy was high. On that particular night, we actually brought in our stage set from New York, where we turned the stage to look like our neighborhood. What a night – I mean, what a weekend.”

This year, the group brought on a new creative developer, who, along with the long-term team, is designing a new stage production intended to bring the Wu-niverse into a new dimension. The set list is also getting a major face-lift, a treat for any Killer Bees looking for more solo Wu members and full Clan deep cuts during live shows.

“There's a lot of great songs in the catalog that don't get a lot of concert play for whatever reason,” RZA says. “The first call we had this week was changing our set list in a more cinematic, dynamic way."

It makes sense that RZA and the Clan would want to update their presentation for a new decade: vivid imagery and a flair for the theatrical have always been cornerstones of the Wu-Tang aesthetic. Across the group's discography, songs and albums are filled with movie samples and sound effects that help graft indelible imagery onto listeners' minds.

“Wu-Tang came out even before DVDs,” RZA laughs. “That may not sound like reality, but it is. There was no TV in your headrest; that didn't happen 'till late '96, '97.

"When we made 36 Chambers, Only Built 4 Cuban Linx..., and Liquid Swords, Ironman, the goal was that the audience would have an audiovisual experience; I was trying to make movies with those albums," he continues. "I'm from the generation of New Yorkers that, for good and bad reasons, used to travel out of state. Whether it was traveling down to Howard University to go to homecoming, on to Atlanta Freaknik, or going down to South Beach... I made [Wu-Tang Clan's music] with the idea of helping that road trip be cool for you.”

While the exact dimension and flavor of Wu-Tang's 2020 III Points headline set can't yet be defined, RZA is damn sure it's gonna be a movie of its own.

“We're striving — and I say 'striving' because you've got to strive, and if you get it, get it,” he says, "but we are striving to make this a new display of our creativity and our talent through our concerts. You guys will be among some of the first to see it this year.”

Indeed, the Wu hasn't held a single stateside performance since its popular Hulu series Wu-Tang: An American Saga first aired late last year. Animated by all of the renewed hype, RZA and the Clan are ready to ride a wave of innovation into the next chapter of their ongoing story.

“We have a lot of new fans getting engaged by us,” he says. “We're just looking forward to getting in front of them with the crew. This is foundation, and [we want] people to understand why Wu-Tang Clan ain't nothing to eff with.”

III Points 2020. With Wu-Tang Clan, Robyn, the Strokes, Disclosure, and others. Friday, May 1, and Saturday, May 2, at Mana Wynwood, 318 NW 23rd St., Miami; 305-573-0371; manawynwood.com. Tickets cost $99 to $249 via iiipoints.com.
KEEP MIAMI NEW TIMES FREE... Since we started Miami New Times, it has been defined as the free, independent voice of Miami, and we'd like to keep it that way. With local media under siege, it's more important than ever for us to rally support behind funding our local journalism. You can help by participating in our "I Support" program, allowing us to keep offering readers access to our incisive coverage of local news, food and culture with no paywalls.
Make a one-time donation today for as little as $1.