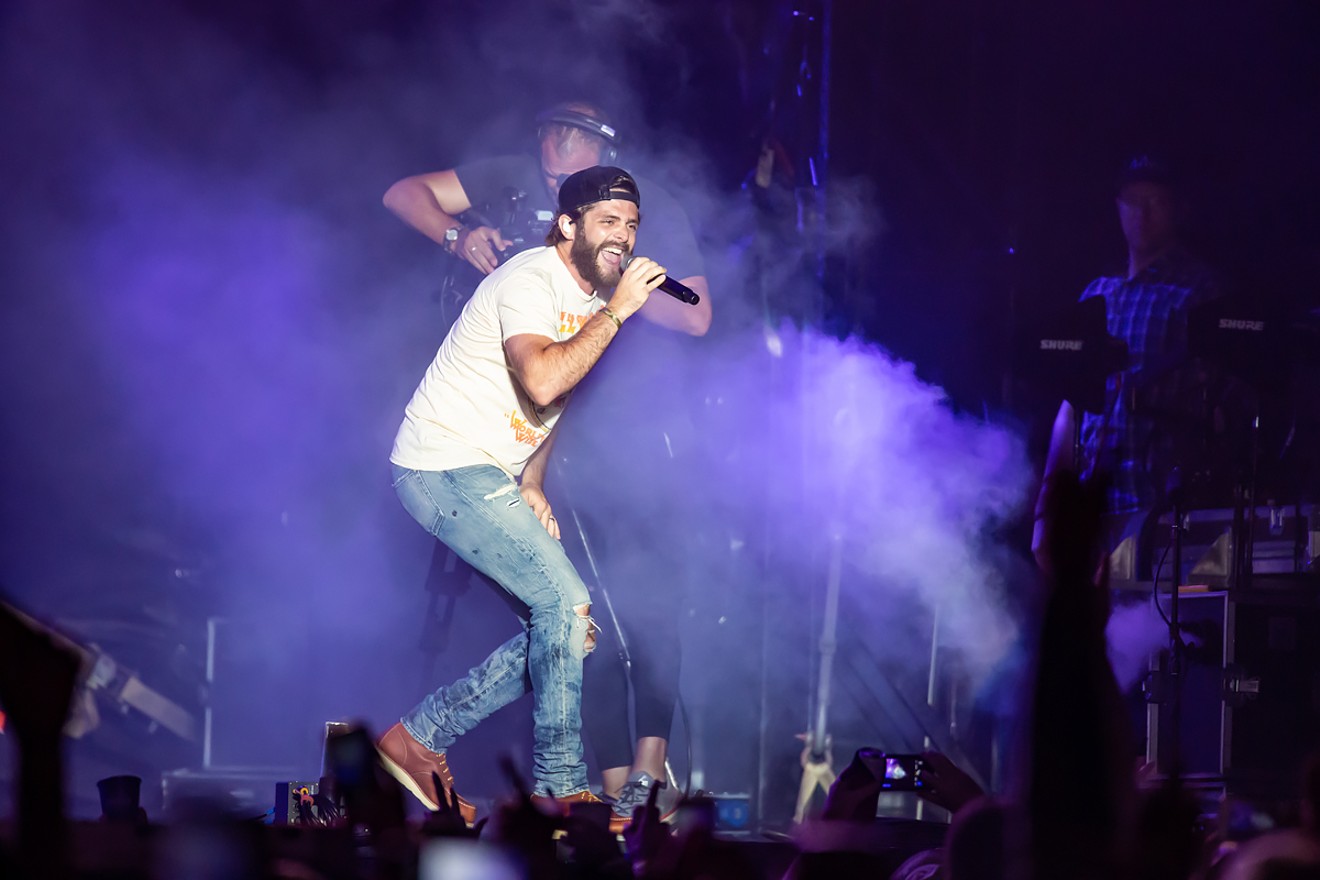 Thomas Rhett Photo by Marc Nader
It was three days of buns, braids, and booze this past weekend at the seventh-annual Tortuga Music Festival on Fort Lauderdale Beach, where some 90,000 foot-’ fans happily fried in the sun and danced to the likes of Jason Aldean, Kenny Chesney, Sheryl Crow, Michael Ray, Flo Rida, and Joan Jett & the Blackhearts.

Saturday, a crowd dominated by young women in fishtail braids and teeny bikinis pounded Coronas and shimmied through the pop-up village near the festival’s three stages.

Fans took selfies on a 50-foot shipwreck, drank bourbon margaritas, and indulged in everything from sushi to tater tots.

And the few gals without thongs could pick them up at one of the many stores selling clothing, art, jewelry, spray tattoos, bamboo straws, and flower headbands.

Thanks to the Rock the Ocean Foundation, Tortuga’s theme was environmental sustainability. No plastic straws were provided; water was sold in cans instead of plastic bottles all leftover food was donated.

There were interactive exhibits from more than 30 ocean conservation leaders where folks could play games or learn about the dangers of ocean plastic and overfishing.

But for many, Tortuga was all about music, and the Next From Nashville Stage turned out to be the hottest ticket of the day.

The smallest and only shaded area of the three stages, it served as a kind of pit stop between the Main Stage and Sunset Stage. Though it was stocked with lesser-known artists, they turned out to be some of the best. Tortuga Music Festival
Everette kicked it off early on the Nashville Stage with a rollicking set that included a rendition of Elton John’s “Rocket Man,” followed by what ultimately became for many the anthem of the day: “Dang the Whiskey.”

The band’s dynamic stage presence and catchy tunes — from the relatable I-can’t-stand-you-but-I-can’t-leave-you lyrics of “Relapse” to the Matthew McConaughey-inspired ode to lazy days and marijuana, “Slow Roll” — drew folks like a magnet.

On the Sunset Stage for her first time at Tortuga, South Florida’s Cassadee Pope gave her fans just what they wanted: country with a side of adorability.

Decked out in rainbow fringe and bright orange, Pope was the embodiment of a pop star. With her bubbly performance and vocals that won her The Voice, a CMT Music Award, and a Grammy nomination, Pope had fans singing in harmony to hits such as “I Wish I Could Break Your Heart,” “Think of You,” and “Bring Me Down Town."

Pope offered a buoyant rendition of Third Eye Blind’s “Never Let You Go” before heading down memory lane with “Homecoming,” from her first band, Hey Monday.

A lackluster set by Maddie & Tae was marred by a low-energy performance and vocals that sounded suspiciously canned. But it turned out to be a blessing, because as fans left to secure spots for Midland at the opposite end of the beach, they had to pass the Nashville stage, which, once again, was where the magic was happening.

In what might have been the day’s most welcome surprise, Clare Dunn’s blend of country, rock, soul, and pop, combined with spirited stage antics and a message of empowerment, sucked in passersby like a vortex.

There were no sappy love songs on the Nashville Stage while Dunn, decked out in head-to-toe black and thigh-high platform belted out songs such as “Gold to Glitter,” “My Love,” “Tuxedo,” and a kick-ass cover of Bob Seger’s “Her Strut.”

With her gruff, sexy voice and swagger like Jagger, Dunn bounced and danced from one end of the stage to the other while ripping out impressive guitar licks and the crowd. 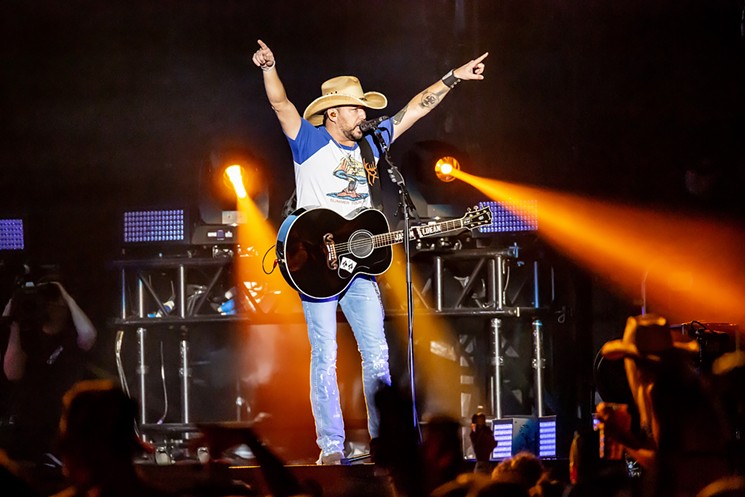 Jason Aldean
Photo by Marc Nader
Her star shone brightest during her cover of Led Zeppelin’s “Rock and Roll,” featuring masterful vocals and crushing guitar that can only be described as an amalgam of the best of both Ann and Nancy Wilson of Heart.

Later, at the Main Stage, Maren Morris drew one of the day’s largest crowds, which swayed in unison to hits such as “Gold Love” and the 2018 Grammy-nominated “I Could Use a Love Song.”

The latter was a monster hit that Morris told the crowd she was initially warned not to release as a single because it was too depressing. “To hell with that!” she shouted before breaking into a rendition that was anything but depressing.

Morris revved up the audience with a hearty helping of independent spirit in “Flavor” and channeled her inner Dolly Parton with the crowd-pleasing “All My Favorite People.”

When the sun went down and the air, the entire vibe changed as the insanity for which Tortuga is renowned kicked into full gear.

Flo Rida launched into an explosive performance on the Sunset Stage, or what became known as “the stage by the giant sperm,” referring to a billowing, six-foot white windsock.

Sporting matching neon-green glasses and tennis shoes, Flo Rida jumped around and pumped his arms to “Good Feeling” while a life-size Tigger strutted through the crowd and a curly-haired guy delighted everyone by a large pineapple over his head.

During a show that was undoubtedly the fan favorite, Flo Rida, flanked by two women gyrating in sparkly bodysuits, brought everyone to their feet with the club hits “Right Round” and “In the Ayer.”

A large twerk pit broke out during “Low,” where a series of random guys were pushed onto lawn chairs and forced to enjoy lap dances so risqué they would make the Donald blush.

About 20 rabid fans were brought onstage to shake their stuff to “Club Can’t Handle Me.” And shake it they did, no doubt leading to plenty of viral, adult-themed Instagram videos. 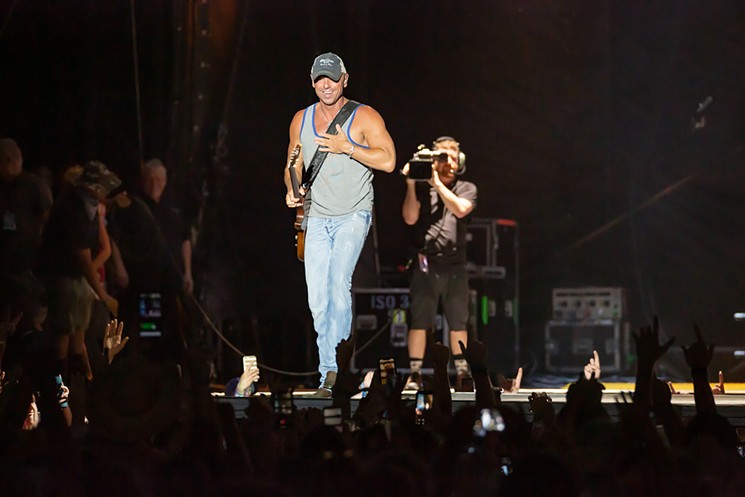 Kenny Chesney
Photo by Marc Nader
“Wild Ones” sent the already frenzied crowd over the edge, jumping and dancing with reckless abandon. And during “My House,” even some of the guys let loose enough to get their twerk on.

Throughout the high-energy, nonstop party, Flo Rida catered to fans by spraying champagne over the crowd, kissing roses and throwing them into the audience, and even jumping offstage for selfies with concertgoers before wrapping up his set with “Green Light.”

Unfortunately for the night’s big headliner, Thomas Rhett, a lot of folks were drained after Flo Rida and bailed early. But those who stuck around got a set of the most classically country tunes of the day.

Rhett, who recently married, rolled into song after song about love, dedication. and family, including “Get Me Some of That,” “Look What God Gave Her,” and “Life Changes.”

Maren Morris joined him for a sweet rendition of their duet “Craving You,” and mellow couples slow-danced to heartfelt ballads such as “Die a Happy Man,” “It Goes Like This,” and “Marry Me.”

The crowd perked up for a fun cover of Garth Brooks’ “Low Places,” which featured a surprise walk-on by Sunday’s headliner, Kenny Chesney.

The funky party anthem “Vacation” was probably the most fun song of the set, and Rhett wrapped up the night with “Crash and Burn,” which is likely what everyone went home and did.

It was a fitting song to close out the because that’s the best part of Tortuga: waking up the next day and doing it all over again.
KEEP MIAMI NEW TIMES FREE... Since we started Miami New Times, it has been defined as the free, independent voice of Miami, and we'd like to keep it that way. With local media under siege, it's more important than ever for us to rally support behind funding our local journalism. You can help by participating in our "I Support" program, allowing us to keep offering readers access to our incisive coverage of local news, food and culture with no paywalls.
Make a one-time donation today for as little as $1.