Late for Work's Ammy Juliet Garcia (left) Vidium
Sometimes you reach a point where you're pretty convinced you've seen it all. But in Miami, we're always looking for new ways to reinvent the party wheel. Rather than jaded by the same old nightlife offerings week after week, creative collective Late for Work came together this past October with one mission: to create unique experiences.

"We’re bored of going to the same places and just getting a DJ in a dark room," says Harrison Ramhofer, half of the collective. "It inspires us to create a party we would want to attend."

Composed of Ramhofer and Ammy Juliet Garcia, Late for Work has launched a series of "experimental dance parties" across the city — everything from a fetish-themed "dungeon dance party" at a hitherto undiscovered basement inside the 777 Mall, to Technoir, a late-night neo-future drag fantasy at Coyo Taco. But their latest monthly at Las Rosas might be their most unusual and surreal effort to date.
click to enlarge 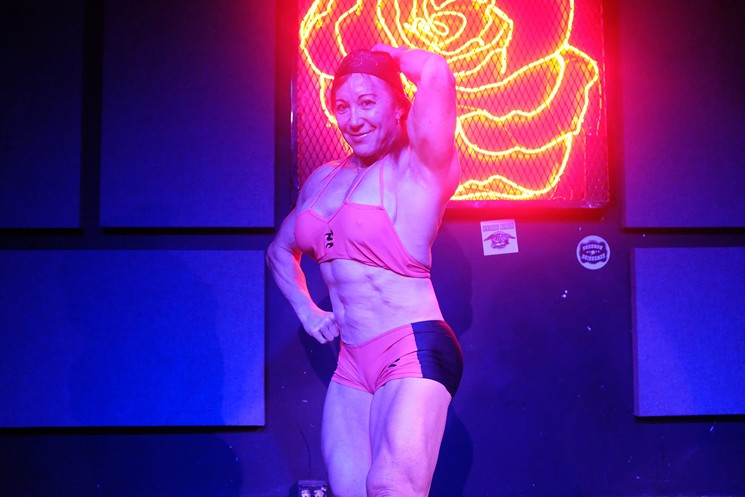 Rita Bello
Vidium
"I've always had a thing for contortionists," Garcia says. The idea for Flex, a new dance party every third Thursday at Las Rosas, was born out of her love for the sort of hyperflexible, spandex-clad performance artists typically associated with the circus. It's , physical, dramatic spectacle. These performers can sometimes be found twisting around giant metal hoops at SoBe clubs. At Flex, Garcia and Ramhofer offer a variation on the theme: female bodybuilders.

"There’s this one lady at the YouFit [gym] on 79th [Street]," Garcia says of Rita Bello, Flex's inaugural performer. "She's , so she's kinda the inspiration behind it." At the first Flex party last month, Bello accompanied a lineup of DJs and live performers by posing — showing off her physique in competition wear. She also judged a flexing competition in which party guests attempted to mimic some of Bello's classic and most challenging poses.
click to enlarge 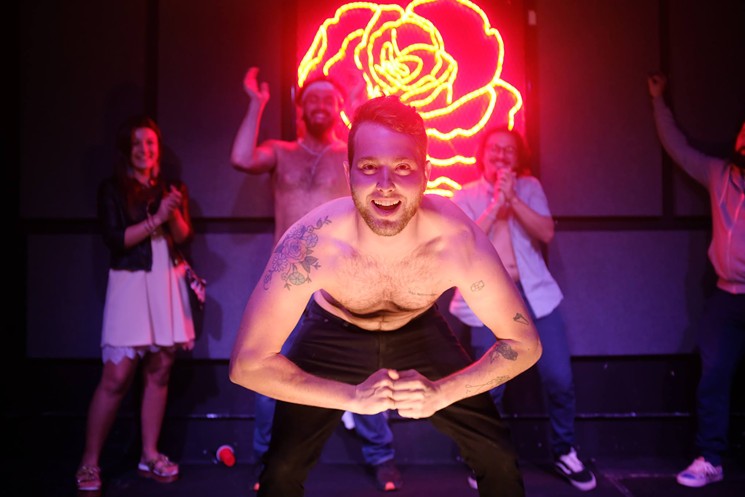 Vidium
This Thursday, at the second iteration of the monthly event, Late for Work will present two new female bodybuilders, along with music by Vinyl Social Club DJs Ebony Denim and Thugpussy as well as a live performance by Niña. There will be another flexing competition or arm wrestling, depending on the bodybuilders' mood. But the idea for Flex isn't limited to bodybuilding. The party plans to expand to contortionists in the future — "anything out of the ordinary within the theme of flexing," Garcia says.
click to enlarge Vidium
Ultimately, like all of Late for Work's projects so far, Flex is a "free-for-all" dance party, with music ranging from techno to reggaeton. With backgrounds in installation and experimental video art, Garcia and Ramhofer bring their creative and curatorial eyes to each concept they work on, challenging themselves to totally immerse guests in whatever wild theme they've devised. "Even we don’t know what to expect,” Garcia says. "Our only request is we want people to dance."

Flex. With DJs Ebony Denim and Thugpussy, performance by Niña, live bodybuilders, and visuals by Ammy Garcia and Harrison Ramhofer. 10 p.m. to 3 a.m. Thursday, January 17, at Las Rosas, 2898 NW Seventh Ave., Miami. Admission is free.
KEEP MIAMI NEW TIMES FREE... Since we started Miami New Times, it has been defined as the free, independent voice of Miami, and we'd like to keep it that way. With local media under siege, it's more important than ever for us to rally support behind funding our local journalism. You can help by participating in our "I Support" program, allowing us to keep offering readers access to our incisive coverage of local news, food and culture with no paywalls.
Make a one-time donation today for as little as $1.