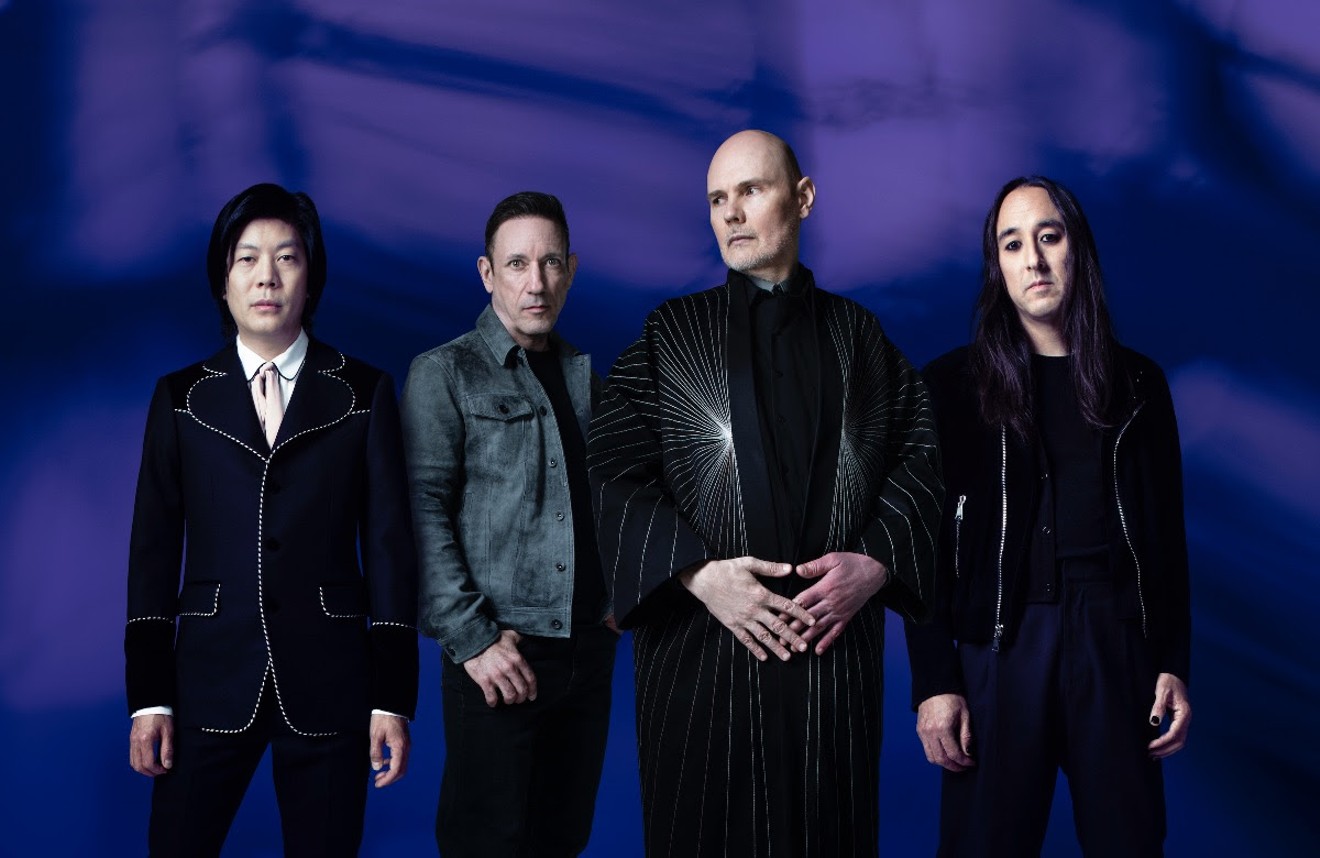 The Smashing Pumpkins Photo by Paul Elledge
The Smashing Pumpkins and Jane's Addiction joint tour, which stops at Hard Rock Live on Saturday, October 8 has been dubbed the Spirits on Fire Tour. Oddly enough, the combination of early '90s alternative-rock icons is reminiscent of another tour that changed American concert culture: Lollapalooza.

Before 1991, there had been plenty of one-off music festivals in the U.S. There was Woodstock, Live Aid, and even the Miami Pop Festival. They were one-time events that, if you missed them, there were no additional dates or return next year to make up for it.

At the same time, in the early '90s, Jane's Addiction decided to call it quits. Frontman Perry Farrell had an idea for a unique farewell tour that he called Lollapalooza. It was partly influenced by UK festivals that would put together massive, eclectic lineups and the Grateful Dead shows where legions of devoted Deadheads traveled around the country as much for the camaraderie as for the music. It also borrowed from traveling circuses that would draw in curiosity seekers under the big tent.

The festival's first edition in 1991, featuring Jane's Addiction, Nine Inch Nails, Ice-T, and Siouxsie and the Banshees on the lineup, was such a success that it became an annual tradition. The bill was mostly made up of what was then known as alternative music, though there were mainstream exceptions like Metallica and Snoop Dogg.

As a high schooler, I attended several editions at Bicentennial Park (today's Maurice A. Ferré Park, AKA Museum Park). In 1992, I saw the Red Hot Chili Peppers, Pearl Jam, Ice Cube, and Soundgarden all in one day. In 1994, Miami witnessed the Beastie Boys, the Breeders, A Tribe Called Quest, and the Smashing Pumpkins. Although Hurricane Andrew laid waste to the city a few days after Lollapalooza '92, both fests were unforgettable events that drew throngs of music lovers under the hot sun.
Concert promoters saw dollar signs, and all kinds of copycat festivals quickly popped up. Warped Tour was the punk Lollapalooza. Lilith Fair was the all-female Lollapalooza. Horde was the jam-band Lollapalooza. And Ozzfest was the heavy-metal Lollapalooza. But as the century closed, the traveling multi-band, multi-city festival began to die off.

In the autumn of 1999, Coachella, a festival out in the California desert, popped up with a lineup filled with Lollapalooza veterans like Pavement, Beck, and Rage Against the Machine. The first year was a bust, and organizers losing a million bucks. But it came back in 2001 with its spiritual forefather Jane's Addiction as the headliner. The band packed the polo field with tens of thousands of people singing along to "Jane Says." And the new destination music festival was born, a multi-day event that ideally draws music lovers from all over the world for a once-in-a-lifetime bill — at least until the next year. Now, every major city hosts at least one major marquee music festival. Miami alone has Ultra, III Points, and Rolling Loud. Even Lollapalooza was reborn as a three-day summer event in Chicago that now has been expanded to Chile, Brazil, Berlin, Paris, and Argentina.

The Smashing Pumpkins and Jane's Addiction Spirits on Fire Tour will differ significantly from Lollapalooza in the '90s. There will be no circus sideshows or Tibetan monks. In the air-conditioned theater, audiences will be protected from the elements. But with the Smashing Pumpkins and Jane's Addiction on stage, it will surely draw many of the people that were at Bicentennial Park on August 22, 1992.

The Smashing Pumpkins and Jane's Addiction. With Poppy. 6:30 p.m. Saturday, October 8, at Hard Rock Live, 1 Seminole Way, Hollywood; 954-797-5531; seminolehardrockhollywood.com. Tickets cost  $65 to $245 via ticketmaster.com.
KEEP MIAMI NEW TIMES FREE... Since we started Miami New Times, it has been defined as the free, independent voice of Miami, and we'd like to keep it that way. With local media under siege, it's more important than ever for us to rally support behind funding our local journalism. You can help by participating in our "I Support" program, allowing us to keep offering readers access to our incisive coverage of local news, food and culture with no paywalls.
Make a one-time donation today for as little as $1.