Lindsey Buckingham Photo by Lauren Dukoff
Tucked behind a wrought-iron gate near North Miami resides Criteria Recording Studios, the birthplace of some of music's biggest hits, from artists and bands such as Fleetwood Mac, Aretha Franklin, ABBA, the Eagles, the Bee Gees, and James Brown.

Founded as a one-room studio by Mack Emerman in 1958, the musical landmark is still bustling and churning out genre-spanning hits 63 years later. If you tried picking up the phone to call the studio in its early days, all you had to do was dial MIAMI-5611.

Compared to cities like Memphis, Seattle, Austin, Nashville, or Detroit, Miami isn't typically associated with rock. Yet the city's stamp on the genre is not to be denied. In fact, Criteria Studios is responsible for one of rock's most iconic contributions, Fleetwood Mac's 1977 masterpiece, Rumours. Criteria is where the band's first top-ten hit, "Go Your Own Way," came to life, along with several other tracks from the seminal album.

Looking back, it was in Florida where Lindsey Buckingham would pen and record the aforementioned breakup song for the ages: The band used their downtime from touring and rented a vacation house in the Sunshine State to work on new music that would eventually become Rumours.


Nearly 45 years after Rumours' release, Buckingham released his first album in a decade. Singles "Scream," "I Don't Mind," and "On the Wrong Side" served to tease the self-titled release, but it's that last track that was inspired by "Go Your Own Way."

The singer and guitarist wrote in an Instagram post: "'On the Wrong Side' is about the peaks and valleys of life on the road with Fleetwood Mac, and sports one of the album's most thought-provoking lyrics: "We were young, now we're old / Who can tell me which is worse?" The song evokes 'Go Your Own Way' in that it's not a happy song, subject-matter wise, but it was an ebullient song musically. This was sort of the same idea."

Both "Go Your Own Way" and "On the Wrong Side" tell stories of relationships gone awry. The former is a breakup track directed toward Buckingham's ex-girlfriend and then-bandmate Stevie Nicks, and the latter is inspired by his time with Fleetwood Mac. Buckingham was dismissed from Fleetwood Mac in 2018 and later filed a lawsuit against the group. Buckingham compares "On the Wrong Side"— not to be confused with his 1994 single of the same name — to "Go Your Own Way," both musically and lyrically. 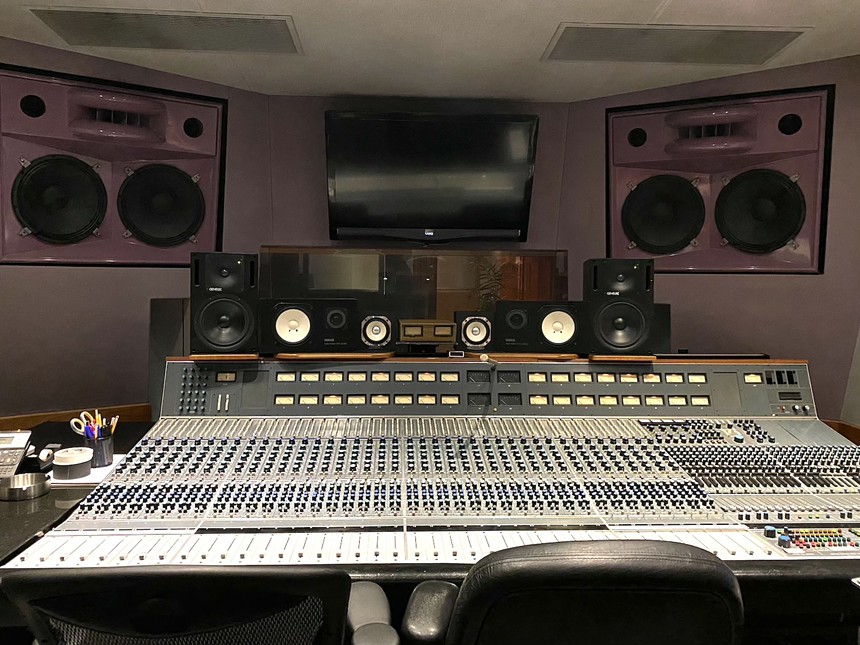 Studio C at Criteria Recording Studios where portions of Fleetwood Mac's Rumours was made.
Photo by Jessica Gibbs
In a recent New York Times profile on Buckingham, writer Lindsay Zoldaz notes, "Though he wrote and recorded the album in 2018, long before Messner filed for divorce, he now believes some of the stormiest songs were 'a little bit prescient.'"

Buckingham is taking his new album on the road for a solo headline tour alongside Sammy Brue, stopping at the Parker (formerly Parker Playhouse) in Fort Lauderdale on Thursday, September 30.

Fletcher has been roaming the halls of Criteria ever since he was a young boy. His mother started working at the Miami recording studio, answering the phones around 1969. "[I've seen things] I can't even talk about," he says jokingly.

In 1983, Fletcher began working at the studios full time answering the phones as his mother did. Prior to that, he had done everything from housekeeping to running errands at Criteria. Now, he runs the place.


Although Fletcher was only a kid when Fleetwood Mac spent time recording at the studio, he says he's "the only person that's [at Criteria] who was even remotely close to those sessions." While he wasn't involved in making the album, he provides an in-depth look at the Miami music cornerstone's rich history.

Rumours, produced by Ken Caillat, Richard Dashut, and Fleetwood Mac, was created over the span of a year between Miami and various recording spaces in California. Fletcher recalls the band spent about a week or so recording at Criteria. He says that the only thing in the studio's radius were pine trees and a few homes during that time.

"[Fleetwood Mac is] pretty much an LA-centric band in terms of everybody living there. Ken Caillat, the producer, lived there," Fletcher says. "So one of the things that made Miami attractive during that time period was it was so far outside the realm of record-label purview, they weren't gonna just pop in on your session because you're in LA or New York. They'd have to make a long shlep to Miami to be involved in the process or to monitor what they're doing. Record labels at that point granted a great deal of rope to artists to create and develop and do their own thing."

Studio C at Criteria Recording Studios where portions of Fleetwood Mac's Rumours was made.
Photo by Jessica Gibbs
Perhaps it was the balmy breezes that kept the Rock & Roll Hall of Famers' creative juices flowing in the subtropics.

Around the year 2000, all of Criteria's rooms were renovated. Despite Studio C's facelift, the feeling of stepping foot into the very room where Mick Fleetwood, Christine McVie, John McVie, Stevie Nicks, and Lindsey Buckingham channeled heartbreak, aired their grievances, and made one of the greatest albums of all time is still a powerful one.

Fletcher shares that Studio C was also the room that gave birth to the Eagles' Hotel California, Black Sabbath's Heaven and Hell, and parts of the Saturday Night Fever soundtrack. Nicks returned to Criteria on multiple occasions and even went back to her familiar Studio C to record songs from her solo efforts years later.

"The ghosts are still in the walls despite the massive renovations," Fletcher quips.

While "Go Your Own Way" is the track that was notably recorded in Miami, the Grammy Award-winning album's recording process was fluid and spontaneous at Criteria. Fletcher says the aforementioned track wasn't the only one from the album recorded there, but it's hard to pinpoint exactly what was done at the Miami recording studio.

In the past, Fletcher says, musicians would schedule sessions months in advance for long periods of time with the same engineers, producers, and band. Now, it's more common to work remotely with multiple people and share the files digitally. Because the process is so involved, especially when performed between numerous studios and producers, it's sometimes hard to keep track of precisely what was done where.

"With recording, people come in and say, 'Wow, the drummer is on fire today. Let's do some percussion overdubs' or 'Stevie's really kicking ass vocally. Let's have her [sing]' or 'X, Y, Z didn't show up. OK, we'll do guitars instead,'" he explains. "Once you're done with guitars on one song, and you're working on 12 songs, [you] switch to the next song. So you may have had every single song on the album touched or done in one part, and then sometimes you'll only do one song on an album."

Lindsey Buckingham. With Sammy Brue. 8 p.m. Thursday, September 30, at the Parker, 707 NE Eighth St., Fort Lauderdale; 954-462-0222. Tickets cost $52.50 to $242.50 via ticketmaster.com.
KEEP MIAMI NEW TIMES FREE... Since we started Miami New Times, it has been defined as the free, independent voice of Miami, and we'd like to keep it that way. With local media under siege, it's more important than ever for us to rally support behind funding our local journalism. You can help by participating in our "I Support" program, allowing us to keep offering readers access to our incisive coverage of local news, food and culture with no paywalls.
Make a one-time donation today for as little as $1.