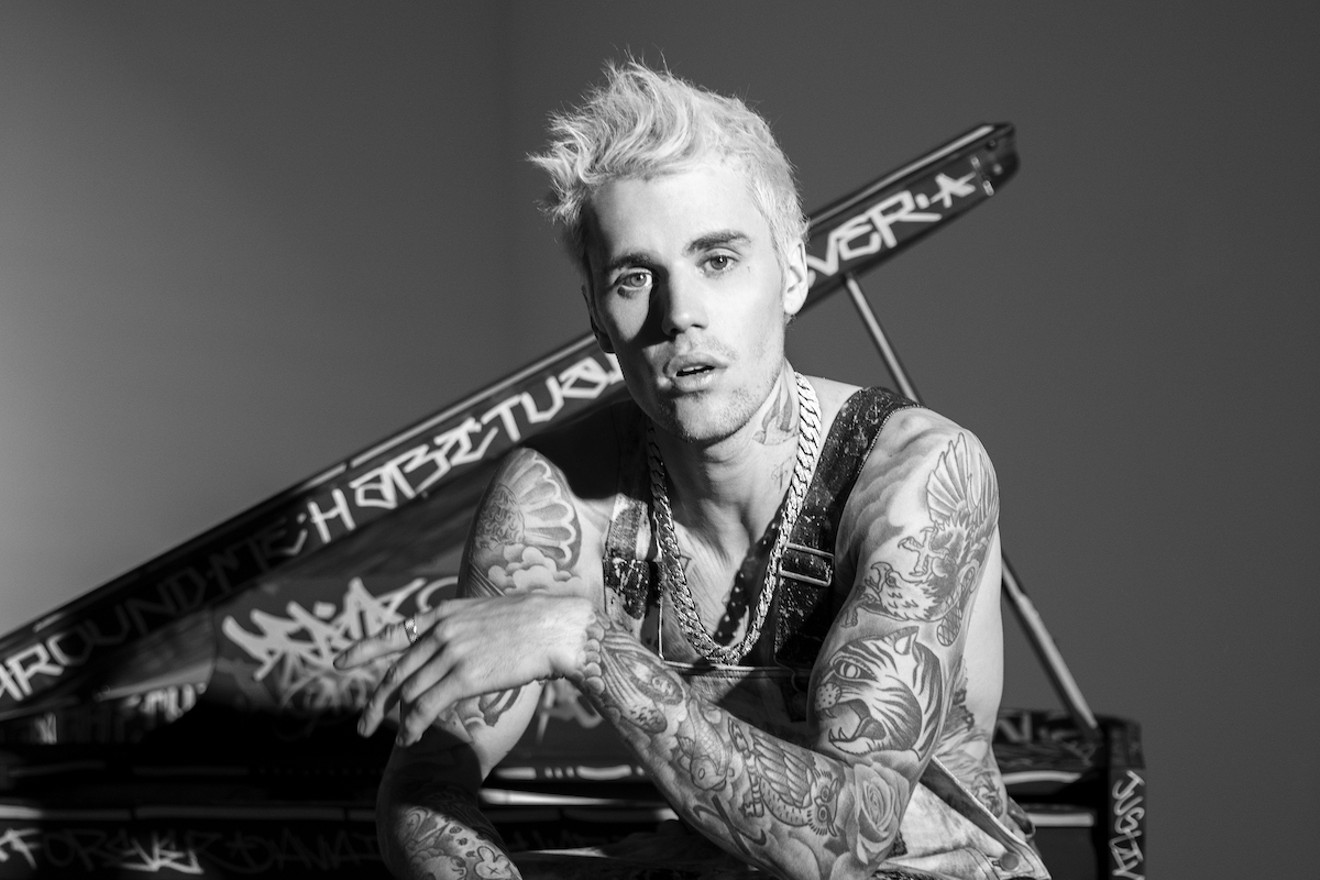 Justin Bieber Photo courtesy of Def Jam
Love him or hate him, Justin Bieber has become one of the biggest pop stars in the history of recorded sound.

Most people love him, of course. The Belieber gang used to be relegated to screaming hordes of tweenage girls who stuck posters of the adolescent singer on their walls, but these days his throng of fans and followers spans nations, generations, and genres.

With more than 150 million records sold worldwide, the Biebster long ago established his bona fides as one of the best-selling musicals acts of all time. His singles "Baby," "Sorry," and "Despacito" have all been Diamond certified, which means they've sold more than ten million copies each.

The singer has also taken home two Grammys on top of 22 nominations, 21 Billboard Music Awards, more MTV Europe Music Awards than any other artist, and 24 Guinness World Records, including the "Most Streamed Track on Spotify in 24 Hours," bestowed upon his 2020 Ed Sheeran collab, "I Don't Care."

The only people who still hate Bieber are old folks who haven't gotten over the great genre divides of the pre-digital streaming era, and liars — because if you're being honest, you secretly love at least one Bieber song.

In honor of the great Bieber's return to Miami at FTX Arena on Wednesday, April 13, New Times has gathered a list of times the hitmaker changed the game of pop music in the modern world. A cultural greatest-hits compilation, if you will.

How many of these moments did you witness?


Bieber's Break Out with Hip-Hop Hitters

Little Justin Bieber was discovered by his manager Scooter Braun in 2007 via a YouTube video that showed the little star-to-be singing and playing drums. He was only about 13, but his talent was evident, and after Braun convinced Bieber's mom to let him sign the kid, the swoopy-banged idol apparent was flown to Atlanta to sing for Usher.

Before breaking out on his own, Braun worked with Jermain Dupri's record label So So Def. That's where the ATL connection stems from, which explains why Ludacris would agree to be on the teenybopper's breakout single. "Baby" wasn't Bieber's first song or even his first hit, but it did solidify him as the biggest pop heartthrob since the 2000s-era boy bands. It was released on his debut album, My World 2.0, in 2010, and it debuted on top of the Billboard 200, making him the youngest solo male act to top that chart in 47 years.

Mariah Carey may have a deadly throat grip on the modern Christmas music scene, but Bieber's second studio album, Under the Mistletoe, was actually a full-length holiday album, and it did extremely well. Released in 2011, it became the first Christmas album by a male artist to debut at the top of the charts in the United States.

Bieber has always worn his Christian faith on his sleeve, but this effort was mostly secular, combining well-known favorites "Santa Claus Is Coming to Town" and "Silent Night" with Bieber originals, including the titular track, "Mistletoe," and "Fa La La" with R&B icons Boyz II Men. It even included a duet with Christmas queen Carey on her megahit, "All I Want for Christmas Is You."

Everyone knows the most challenging moment in a child star's life is switching from kiddy cool to a grown-ass artist. It's a moment that makes or breaks careers, and when Bieber finally turned 18, he turned to dance-pop and urban beats to help him secure the lifetime bag.

His third studio album, Believe, featured production from Darkchild, Hit-Boy, Diplo, Max Martin, and Zedd, as well as features from bonafide rap stars Ludacris (again!), Big Sean, Drake, and Nicki Minaj. The EDM-infused hit single "As Long As You Love Me" came with a cinematic music video starring Quentin Tarantino collaborator Michael Madsen, which came together to prove that Bieber was indeed all grown up and to be taken seriously.

The plan did not backfire. Believe topped the Billboard charts, marking Bieber as the first artist in history to nab five U.S. number-one albums by the age of 18.

All that grown-up attitude went a few miles too far, and by 2015, Bieber had gone from cute-faced star boy to pop-culture enemy number one. A series of embarrassing videos and arrests made him the laughingstock of the industry and brought him a lot of heat from talking heads. None of us can imagine what it's like to be so young, rich, and stupid, but the whole world did its best to have an opinion nonetheless.

It wasn't looking great for our guy. Then dance music producer kings Skrillex and Diplo got with Bieber in the studio on a heartfelt dance-pop hit that would change the sound of pop and EDM entirely. "Where Are Ü Now" caught fire, running up the charts and earning a Grammy for "Best Dance/Electronic Recording." Bieber even joined the DJs on the main stage of Ultra Music Festival in Miami for a surprise performance of the track, and when the crowd cheered instead of booed, Braun knew his star had earned a new crowd.

The song's electronic style greatly influenced Bieber's fourth studio album, Purpose, which gave him three more number ones in the U.S., including "Love Yourself," "Sorry," and "What Do You Mean?" Those songs also made Bieber the first artist in history to occupy the top three spots on the UK Singles Chart.


"Despacito" Takes Over the Entire World

Today, Latin music has taken over the world. But before J. Balvin and Bad Bunny were beloved in Canada, there was a little song from Luis Fonsi and Daddy Yankee called "Despacito." The half-time reggaeton-pop jam was a romantic Spanish-language sing-along, but it wasn't until Bieber jumped on the remix that it became literally the biggest single ever released.

"Despacito" topped the charts in 47 countries, including the Billboard Hot 100. It was Bieber's second consecutive number one, making him the first artist ever to accomplish the feat, and all that Spanish singing earned Biebs a Latin Grammy for "Best Urban Fusion/Performance." The song was everywhere in the summer of 2017, and after its breakthrough success, Spanish-language music never left the mainstream pop spotlight.


…And Justice for All

After the R&B-inspired album Changes, Bieber came back to the world of pop for a smash-hit of an album. While he 100 percent absolutely stole the Justice album logo from the Grammy-winning French electronic duo of the same name, he did, in fact, deliver on a fabulously infectious and fan-worthy collection of original music material.

Tunes like "Peaches," "Ghost," and "Holy" build on the roots of everything Bieber has done from his earliest days to now. It's an upbeat, earnest, and just-plain-fun listen, and it earned Bieber his eighth number-one album, putting him at the top of pop history alongside none other than the King, Elvis Presley. It also made him the first male solo artist to simultaneously debut a number-one song and album, thanks to the hit that is the aforementioned "Peaches."

Justin Bieber. With Jaden and ¿Téo? 7:30 p.m. Wednesday, April 13, at FTX Arena, 601 Biscayne Blvd., Miami; 786-777-1000; ftxarena.com. Tickets cost $59.50 to $199.50 via ticketmaster.com.
KEEP MIAMI NEW TIMES FREE... Since we started Miami New Times, it has been defined as the free, independent voice of Miami, and we'd like to keep it that way. With local media under siege, it's more important than ever for us to rally support behind funding our local journalism. You can help by participating in our "I Support" program, allowing us to keep offering readers access to our incisive coverage of local news, food and culture with no paywalls.
Make a one-time donation today for as little as $1.