Where to Party Every Night of the Week in Miami 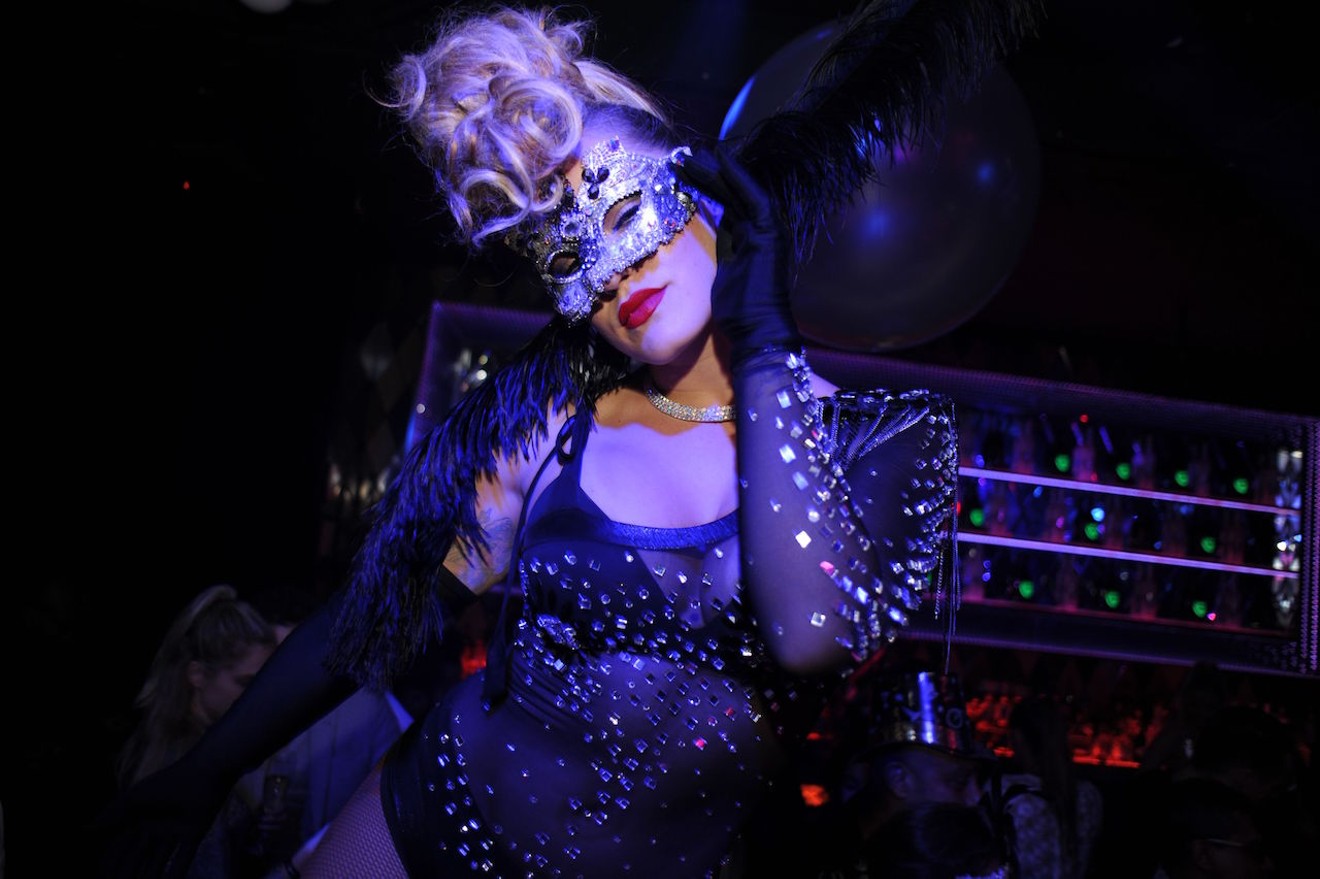 Bring your mask to the Purge party Tuesday at Mr. Jones. Photo by Kenneth Dappah
If you take your nightlife seriously, Miami is one of the best cities to live. On any given night of the week at clubs and bars from South Beach to Calle Ocho, a motley crew of heathens gathers to dance, sing, drink, and flirt until the late-night hours — even on Mondays.

Whether you're looking to blow off steam over the weekend or trying to go up on a Tuesday, Miami's party scene never takes a night off.

Drag Mondays at Kill Your Idol

222 Española Way, Miami Beach
305-672-1707
subculture-org/kill-your-idol
For a fabulous first night of the week, head to this laid-back spot on Española Way for Drag Mondays, named one of New Times' best local drag nights. Bring your wig to dance alongside resident drag performers the Eye Dolls and DJs Deejay Smeejay and Scotty. Along with the rotating drag performances, Mondays at Kill Your Idol offer one of the best happy hours in town. From 8 to 10 p.m., enjoy half off booze such as $2 PBRs, $2 Jell-O shots, and $6 Absolut vodka cocktails. The first show starts at 11 p.m., followed by a series of performances throughout the night. Mondays from 11 p.m. to 3 a.m. Admission is free. 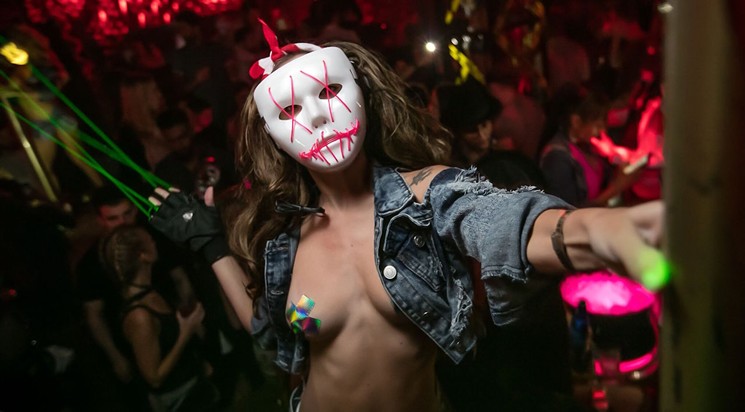 320 Lincoln Rd., Miami Beach
305-602-3117
mrjonesmiami.com
Tuesday is a naughty delight at Mr. Jones — a sultry theatric nightclub on Lincoln Road. Come with an open mind: the Purge party is named for the action horror film in which all crime is legal for a 12-hour period. Capacity is capped at 450, so the venue offers an intimate atmosphere that puts everybody in a rowdy mood. Bring your masks for this one. Tuesdays from midnight to 5 a.m. Admission is free at the discretion of the doorman. 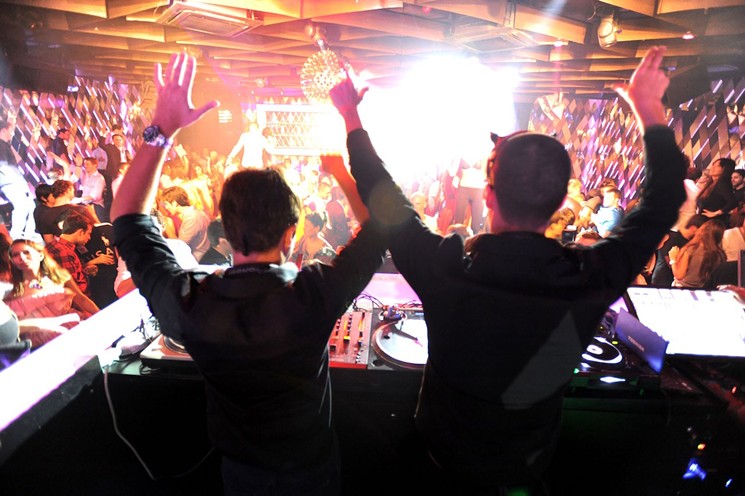 Favela Beach at Wall.
The Wall

2201 Collins Ave., Miami Beach
305-938-3130
wallmiami.com
South Beach's longest-running Tuesday party has been celebrating Brazil's vibes and music for the past nine years. Located inside the W South Beach, Wall's dance floor is lined with VIP tables under a disco ball, and the walls are illuminated with diamond-patterned gilded mirrors. DJs ranging from local spinners to global imports lead the crowd through an adrenaline-pumping journey of electronic, Brazilian funk, and hip-hop beats. Surprise sets happen often and have included guests such as Jamie Foxx and Paris Hilton. Tuesdays from 11 p.m. to 4 a.m. Admission costs $40. Heard your boyfriend was away this weekend. Wanna meet at Bâoli?
Photo by Sebastian Berdnarski

My Boyfriend Is Out of Town at Bâoli

1906 Collins Ave., Miami Beach
305-674-8822
baolimiami.com
Bâoli is one of the most sought-after dining reservations in town, but it's also a party hot spot Wednesdays. The party ebbs and flow in the main room, but the crowd in the outdoor garden never stops, rocking till 4 a.m. to the venue's sensual DJ sounds. Whether your boyfriend is really out of town or you're looking for one, this is the perfect spot to hang with your friends for a great night out. Wednesdays from 11 p.m. to 4 a.m. Admission is free.
click to enlarge 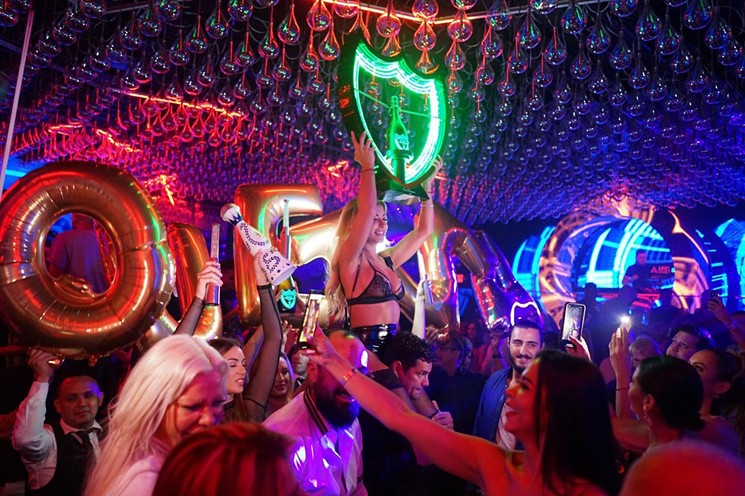 1921 Collins Ave., Miami Beach
305-532-0727
myntlounge.com
Nights have been merging into mornings for almost two decades at Mynt, a club that has relentlessly carried the torch for Miami's high-energy nightlife. People are drawn to this a classic club with one main room, the DJ booth at the end, and dancers continually hyping the crowd. You'll find locals and fancy out-of-towners dancing at the VIP tables throughout the venue. Mynt's crowd is diverse, so expect a mélange of techno, reggaeton, house, and rock. Thursdays from midnight to 5 a.m. Admission costs $30. Thursdays are a circus at Story.
Groot Hospitality

136 Collins Ave., Miami Beach
305-479-4426
storymiami.com
is one of Miami Beach's most beloved clubs, and it goes hard any night. But Thursdays, visitors can expect hip-hop superstars to play in the megaclub's extravagant circus-style setting. Recent performers have included Saweetie, Trey Songz, Ja Rule, and Jeezy. Story's 27,000-square-foot space also offers premium bottle service, more than 60 exclusive VIP tables, and five full-service bars. But you can skip all of that and dance your ass off on the floor in front of the DJ booth, which becomes a writhing sweatbox after midnight. Dress to impress, and don't be put off by the tough door: Story's party atmosphere is worth the wait. Thursdays from 11 p.m. to 5 a.m. Cost of admission varies depending upon the entertainment lineup. 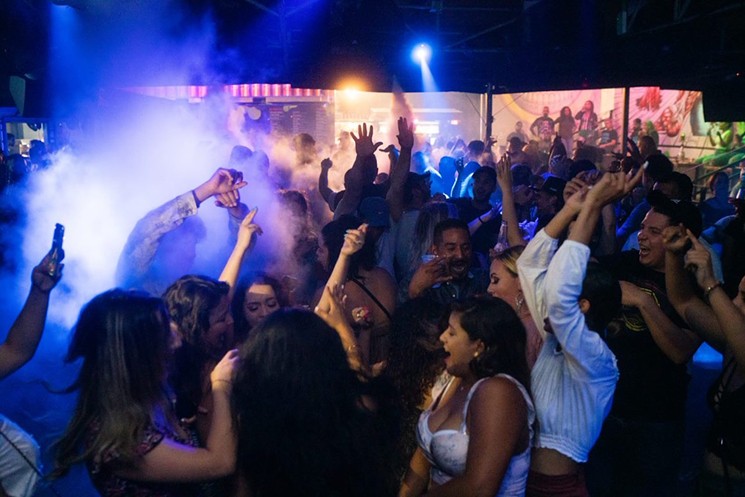 311 NW 23rd St., Miami
305-571-0439
shotsbar.com
Shots is not a pretentious place. You can dance all night or be a wallflower, but you'll likely want to dance after you get some liquid courage from the more than 100 specialty drinks on this Wynwood club's roster. Favorites include the Cum Shot, poured from a large phallus-shaped vessel; Bohemian Titty Juice, served from a giant boob container; and Dragonball Z, which is lit on fire. [email protected] It Fridays, one of the best end-of-the-week events in town, includes happy hour from 5 to 10 p.m., when beer and shots start at $3. If you sing, don props, and dance like there's no tomorrow, bartenders will often reward you with complimentary booze. Fridays from 5 p.m. to 3 a.m. Admission is $10 for men after midnight. 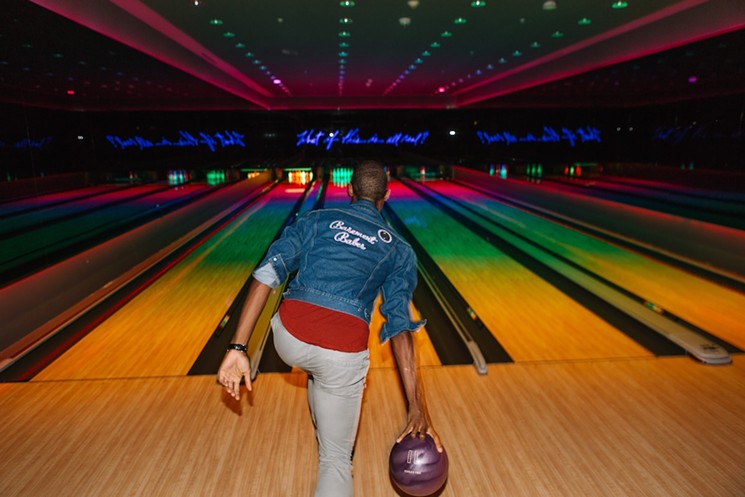 Fridays are the best night to head to Basement Miami.
Photo by Sebastian Berdnarski

2901 Collins Ave., Miami Beach
786-257-4500
editionhotels.com
Few clubs in South Florida can match Basement's level of entertainment. Guests can dance in front of a DJ, ice-skate on a neon-lit rink, or swing balls at the four-lane bowling alley with oversize LED-screen displays and interactive synchronized lighting. There are no long lines or VIP areas in this 6,300-square-foot venue. Fridays, a rotating lineup of local and global DJs hits the decks for In the Bowl, Basement's weekly party. Fridays from 10 p.m to 2 a.m. Admission is free. 1513 SW Eighth St., Miami
305-643-7820
ballandchainmiami.com
This sprawling Calle Ocho speakeasy — offering live music indoors as well as outside on the Pineapple Stage every night of the week — is one of the hottest scenes in town. But Saturday's La Pachanga is a must, when the Pineapple Stage's musical lineup draws multigenerational crowds, locals, and travelers searching for a taste of Old Cuba. Enjoy timba, salsa, and merengue under the stars, or grab a drink from the indoor bar. At Ball & Chain, there’s no shortage of dance partners no matter what's playing. Saturdays from 9 p.m. to 3 a.m. Admission is free. 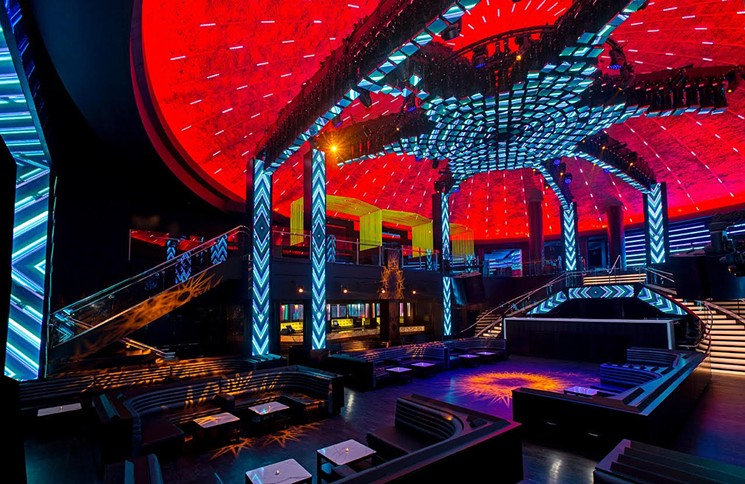 4441 Collins Ave., Miami Beach
305-674-4680
livnightclub.com
Make no mistake: Sundays in Miami Beach are no less fun than any other night of the week. At the Fontainebleau's megaclub, LIV, guest performers span hip-hop's biggest stars. If you can make it past the velvet rope, you'll enter a cavernous two-story spectacle with a banging sound system and superb vibe, and you might just find yourself rubbing elbows with celebs such as Kim Kardashian, French Montana, and Anitta. Sundays from 11 p.m. to 5 a.m. Cost of admission varies depending upon the entertainment lineup.
KEEP MIAMI NEW TIMES FREE... Since we started Miami New Times, it has been defined as the free, independent voice of Miami, and we'd like to keep it that way. With local media under siege, it's more important than ever for us to rally support behind funding our local journalism. You can help by participating in our "I Support" program, allowing us to keep offering readers access to our incisive coverage of local news, food and culture with no paywalls.
Make a one-time donation today for as little as $1.
Juliana Accioly
Contact: Juliana Accioly