Five Things to Watch at This Year's Premios Juventud Natti Natasha will perform "No Lo Trates" Jodie Jones
Premios Juventud, Univision’s youth awards show, will glam up the red carpet at Miami’s Watsco Center July 18. Hosted by the boy band CNCO, Argentine artist Lali, and Mexican-American model and TV presenter Alejandra Espinoza, the 16th-annual awards show features 124 nominees in 24 categories that span music, fashion, dance, social media, and other categories. They were chosen through partnering with experts in the music, video, digital, and fashion industries, and fans had the chance to vote for their favorite celebs until June 4. (See the full list of nominees here).

If you’re tuning in to see the results, here are a few things to expect.

Natti Natasha will perform "No Lo Trates"
Jodie Jones
Stellar performances. Live performances at the show will boast some of the top acts in Latin music. Artists taking the stage include bachata king Romeo Santos, singing a song from his latest album, Utopia; Pitbull, Daddy Yankee, and Natti Natasha, performing their new single, “No Lo Trates”; Pedro Capó, singing with his hit single “Calma”; and Maluma, who’s also the most nominated artist this year. Just this week, Univision announced 19 additional performers, so rest assured there will be plenty of entertainment between award announcements.

New music for your next playlist. You’ll find plenty of names you already know among the nominees — front-runners include Maluma, Bad Bunny, Daddy Yankee, Anuel AA, Becky G, J Balvin, Karol G, and Ozuna —but several of the categories this year nod to new or on-the-rise artists. Pay attention to categories such as New to the USA but Big at Home, the New Urban Generation, and the New Regional Mexican Generation for names to know. Among them is Rosalía, whose second studio album, El Mal Querer, made waves last year — she's only just beginning to show the world all she can do.

A tribute to Mexican music history. The category Regional Roots 2.0, which celebrates artists who are keeping traditional Mexican music alive, comes with a special and historic performance. Produced by the iconic Mexican-American singer Pepe Aguilar, it will feature all five nominees in the category performing together onstage. The musicians include Aguilar’s daughter, Ángela Aguilar; and Alex Fernández Jr., the grandson of another icon, Vicente Fernández. The show will mark the first time all of the nominees in a regional Mexican music category perform together at Premios Juventud. 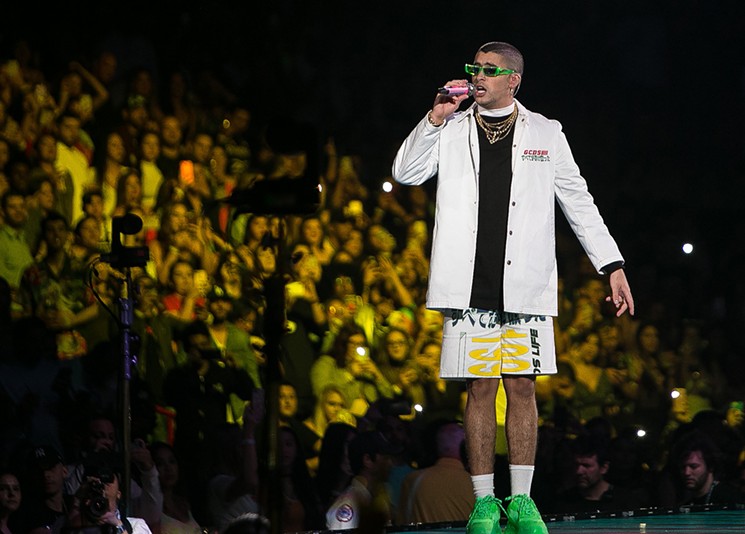 Bad Bunny at a recent performance in Miami
George Martinez
Wild fashion. Many of the celebrities being honored were nominated for their personal style as well — from red-carpet standouts and unique streetwear to trendsetting shoes and hairstyles. A quick scroll through the Instagram feeds of stars such as J Balvin, Bad Bunny, Cardi B, and Jennifer Lopez reveals why. Expect them to show up rocking creative looks.

Awards for the digital age. Premios Juventud knows its audience, and a portion of the show will honor stars’ social media presence. Awards include Couples That Fire Up My Feed; Triple Threat, for influencers dominating TV, radio, and digital platforms; On the Rise, for artists with growing social media followings; and Living Your Best Life, for those who use their platforms to promote good causes. Think of Karol G and Anuel AA, who garnered more than three million likes for a photo they posted of themselves together right before their hit “Secreto” dropped, or Lin-Manuel Miranda, who has 2.8 million Twitter followers and has used his platform to raise awareness and aid for hurricane victims in Puerto Rico. These days, it’s no secret that social media is a major way fans engage with the artists they love, and the awards show will reflect that.

Premios Juventud. Thursday, July 18, at the Watsco Center, 1245 Dauer Dr, Coral Gables; 305-284-8686; premiosjuventud.com. Tickets are sold out.
KEEP MIAMI NEW TIMES FREE... Since we started Miami New Times, it has been defined as the free, independent voice of Miami, and we'd like to keep it that way. With local media under siege, it's more important than ever for us to rally support behind funding our local journalism. You can help by participating in our "I Support" program, allowing us to keep offering readers access to our incisive coverage of local news, food and culture with no paywalls.
Make a one-time donation today for as little as $1.