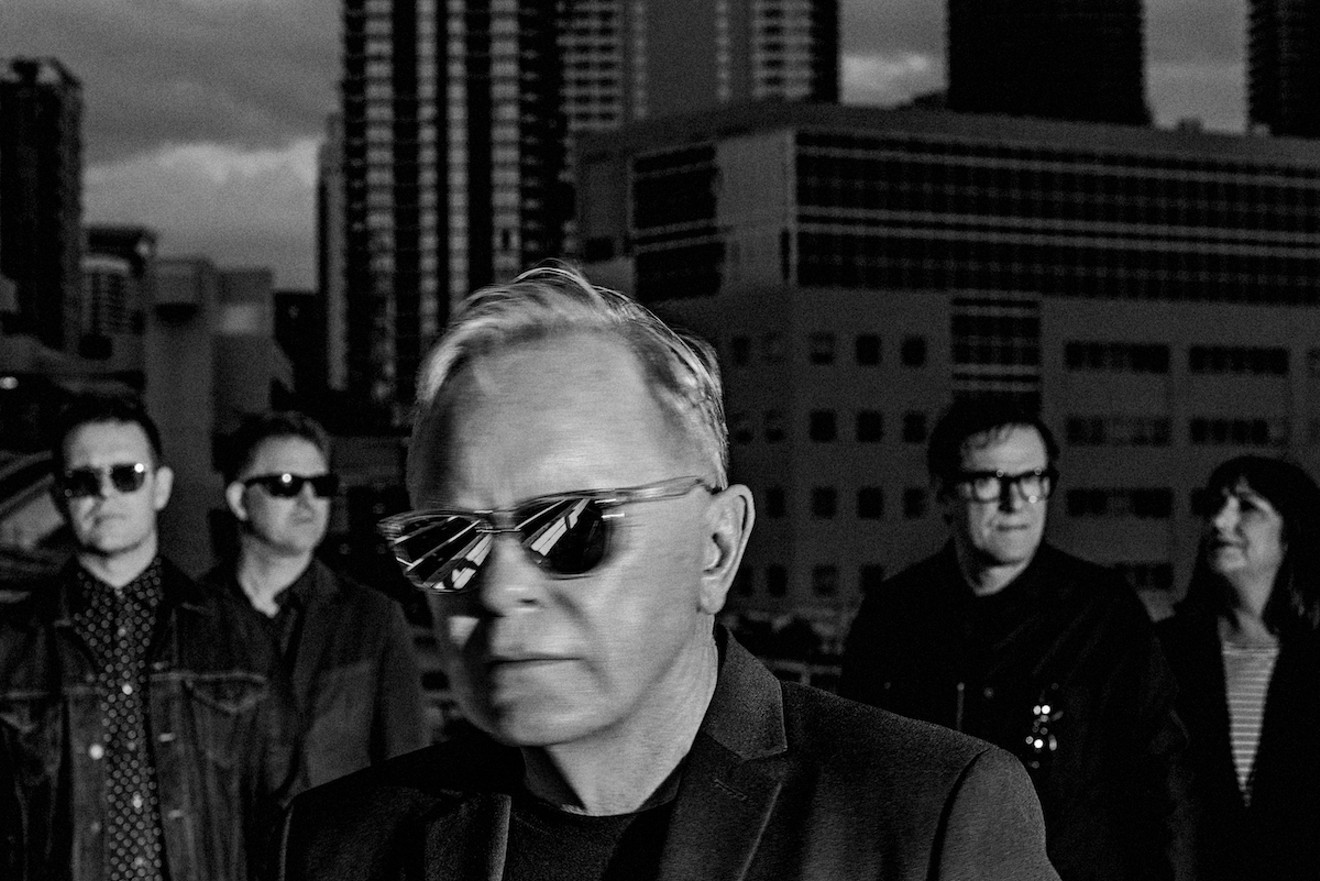 New Order's residency proves Miami's nightlife doesn't stop the first month of the year. Photo by Warren Jackson
In just a matter of days, the greatest Miami musical event of the season — perhaps the year — will be upon us. New Order, arguably the best band of the '80s, is set to play four shows at the Fillmore Miami Beach beginning Tuesday, January 14. Birthed from the ashes of Joy Division, the boys (and girl!) from Manchester, England, helped to direct pop music into an exciting new electronic era, an innovation for which all of the Magic City's dance-floor fiends are eternally grateful.

Odds are you've heard "Blue Monday" 5,000 times and loved every single play. Maybe you can even sing the entirety of "Bizarre Love Triangle" in your sleep. So here are some tracks you might not know off the top of your head. Given the range of New Order's discography and the group's penchant for slipping fan favorites into its set lists, we think some of these tracks might make appearances at the Fillmore.

The first New Order B-side technically began life as another band's song. Accompanied on wax by its A-side, the iconic postpunk anthem "Ceremony," "In a Lonely Place" was written by Ian Curtis, the lead singer of Joy Division. In 1980, Curtis took his own life after struggling with mental illness and epilepsy. The band carried on in his absence — guitarist Bernard Sumner took over on vocals, and Gillian Gilbert became the new fourth member — but Curtis' death cast a long shadow over the band, particularly on the morose electronic textures on the group's first album, the underrated Movement.

Nowhere can this gloom be heard better than on "In a Lonely Place," the most Joy Division-like song in New Order's catalog, right down to Sumner's imitation of Curtis' distinctive, drawling vocals. Between the plodding drums, penetrating two-note bass line, and gothic lyrics, it's the most haunting — and haunted — the band would ever sound. Curtis may have written the line "I wish I were here with you now," but it comes across as a paean to the dearly departed from the living.

A B-side to a B-side, this track was released on a Belgium-only issue of "Everything's Gone Green," which was itself a B-side to the "Procession" single released in England. Though New Order's label, Factory Records, ordered the two B-side tracks correctly on the wax itself, the Belgian sleeve accidentally swapped the two, leading people to believe it was actually the song "Mesh." This error carried over to the best-selling singles compilation Substance, which means "Cries and Whispers" has long been traveling under an assumed name. It's mildly appropriate for the transient lyrics, which are preoccupied with travel and a feeling of displacement ("There's hope, you've heard there's life in another world"), but it confounded fans for years. Taking its title from an Ingmar Bergman drama, the track continues the cinematic inspiration of "In a Lonely Place," although it's just a tad more upbeat.

Though it's definitely not the stark thrust into daylight that Power, Corruption & Lies opener "Age of Consent" is, "We All Stand" marks an important shift in the band, showing its had effectively finished mourning musically for Ian Curtis. The moody instrumental, with its jazzy drums and spindly guitar, could have come from the earlier band, but Sumner's confident vocal delivery, swapping the baritone for a higher tenor, proves he had finally left Curtis' shadow once and for all. Fusing foreboding lyrics ("At the end of the road/There's a solder waiting for me") with the overall brighter arrangement of New Order's second album, this song isn't like any other in the band's discography.

Fine, we've been had: This is neither a B-side nor a deep cut. But you must understand the absolute tear that New Order was on in the mid-'80s: By the time Low-Life had rolled around, the bandmates had perfected the sound they engineered on the best-selling "Blue Monday" with a series of incredible dance-oriented synth-and-drum-machine-driven singles such as "The Perfect Kiss," "Confusion," and "Bizarre Love Triangle." New Order conquered the radio on both sides of the Atlantic; it began soundtracking John Hughes movies; it was arguably the biggest band in the world. Despite its own success (it reached 18 on the U.K. Singles Chart), the slow, romantic "Thieves Like Us" is rather underappreciated, and that's what we're celebrating here more than anything. It also happens to have been produced in collaboration with the DJ and innovative hit-maker Arthur Baker, who now resides in Miami and is slated to open for the band during the residency.

New Order is best known for its hits of the mid-'80s, but the band was also partly responsible for popularizing one of the greatest phenomena to reach across the world, one that hit the shores of Miami in a big way: the rave. Thanks to the machinations of Factory Records, New Order's record sales partially funded the Haçienda nightclub in the band's hometown of Manchester, arguably one of the most legendary after-hours spots in the world and the place where the culture around electronic dance music was incubated in the United Kingdom. By 1989, when the Madchester era was in full swing with all the guns, drugs, and good times that came with it, the influence of acid house had made itself apparent in New Order's music through the album Technique, partially (and expensively) recorded in Ibiza to the chagrin of financiers at Factory Records. The utopian mood of the time had to end eventually, and the wistful mood of "Vanishing Point" seems to recognize that. But for a time, New Order and its city were on top of the world.

Republic is considered a low point for New Order both by critics and the band. By the time the album was released, Factory Records was in dire financial straits, and the Haçienda, despite being full every night, was losing money (you can't run a successful club when patrons are taking Ecstasy instead of buying drinks). The bandmates recall making the record essentially to save the label, and although it contains their last big crossover hit — the pretty good alt-rock jam "Regret" — Factory's early practice of giving bands total ownership of their music ultimately proved to be its undoing, and the imprint declared bankruptcy in 1992. The dissolution of earth-shattering record labels aside, Republic has its moments. The rave-y "Chemical," with its hard-hitting beats and sardonic Sumner lyrics about feeling like a cog in a machine, is fantastic, as is the Peter Saville cover inspired by the graphic designer's move to California. Houses burn while glamorous people romp on a nearby beach? We wonder about the relevancy of that today.

For as long as New Order has been active, its sound has reflected the musical Zeitgeist, whether by shaping it or leaning into trends. The bandmates reunited in 2001 following a multiyear hiatus, and the fact that their two albums from that decade — Get Ready and Waiting for the Sirens' Call — were so poor says more about the state of popular music at the time than it does about the group. Both records had awful vocal features from the likes of Billy Corgan and Primal Scream's Bobby Gillespie and took inspiration from big-beat electronica, classic rock, and sentimental country. One of the best songs from this era, the "Crystal" single B-side "Behind Closed Doors," ditches overblown production for mood and sardonic Sumner lyrics, but unfortunately, the cut-rate breakbeat percussion can't be avoided. Listening to "Behind Closed Doors" is like stripping away the glossy paint job to find the New Order we know and love.

After the release of Waiting for the Sirens' Call, the band suffered a blow in the wake of bassist and founding member Peter Hook's departure. The acrimonious legal squabbles that have since ensued between him and the rest of New Order over royalties seem to indicate he won't return anytime soon. Ironically, although Hook's iconic bass lines are much-missed, the band's recordings have only improved since he left; the 2015 album Music Complete was New Order's best in years. They figured out how to best use artist features — Iggy Pop's guest vocals on "Stray Dog" are a highlight — and the clean production on tracks such as "Plastic" makes the band sound contemporary without being overly trendy. If this is the caliber of song we should expect to hear at the Fillmore shows, there's good reason to be excited.

New Order. Tuesday, January 14; Wednesday, January 15; Friday, January 17; and Saturday, January 18, at the Fillmore Miami Beach, 700 Washington Ave., Miami Beach; 305-673-7300; fillmoremb.com. Tickets cost $78.50 to $250 via livenation.com.
KEEP MIAMI NEW TIMES FREE... Since we started Miami New Times, it has been defined as the free, independent voice of Miami, and we'd like to keep it that way. With local media under siege, it's more important than ever for us to rally support behind funding our local journalism. You can help by participating in our "I Support" program, allowing us to keep offering readers access to our incisive coverage of local news, food and culture with no paywalls.
Make a one-time donation today for as little as $1.