Avicii Photo by Sean Eriksson
The death of Swedish DJ/producer Tim Bergling, AKA Avicii, rocked the world of electronic music last year. The artist was known around the globe as "an awe-inspiring creator, pioneer, artist, and true trailblazer in modern music," as Ultra Music Festival described him in a commemorative statement. But at the age of 28, the EDM superstar died by suicide.

Now South Florida fans are facing the first Miami Music Week since Avicii's death. The Magic City played a supporting role in the star's rise, from highly anticipated sets at Ultra to the Avicii Hotel experience that took over swanky resorts such as the SLS South Beach and Marlin Hotel. Did Miami's club culture also affect his mental health?

“Start the week on Wednesday, two parties a day till the end of the week.”

That's the motto of Natalie Serret, AKA the @Ravecationist. Serret, age 25, is a born-and-bred Miamian who describes herself as a festival connoisseur. She attended her first Ultra in 2012 and quickly ramped up her party game, sprinting through the marathon that is Miami Music Week.


Riding that five-day train of raving takes a toll, she admits. “It is physically very exhausting, but to it is fulfilling. It allows me to break free from social standards.” For Serret, Miami Music Week (MMW) offers a change from the stresses of everyday life. “I will make time for it. Yes, I’m tired by the end of it, but music is something I’m passionate about.” She says the experience allows her brain to quiet down while she lets loose by listening to her favorite tunes. But she also acknowledges that party people have to know when to get off the ride. “The moment it stops being fulfilling, you need to take a step back and put yourself first. Stay home and be in silence. It’s all about balance.”

But opting out isn't easy when your livelihood depends on the party. For performers and event organizers, finding that balance can be difficult.

Ashley Venom, age 24, is an event producer, art curator, artist, and DJ based in Miami. She works with III Points, the local record label Space Tapes, and the women's empowerment organization and artist collective (F)empower.

From all appearances, these ventures have been successful, but behind the scenes, Venom is often tasked with handling unseen challenges. And that work affects her mindset. “I experience ups and downs with my mental health," she says. "It has never been a straight line for me. Working in the event/music industry is fun, but people don’t really talk about the high-stress moments that can affect the mind. I’ve experienced things like having the event I spent a year working on almost canceled because of a hurricane, not getting sleep for a month straight before the festival every year, managing a thousand requests at once, and even things like misogyny and disrespect from people who don’t understand your role in a production. All these have some effect on mental [health].”

Still, Venom says, is "one of the best times to be in Miami.” She describes the week as a time when everyone in the city gathers to celebrate music and connect with artists from around the world. From big clubs to grassroots artist collectives and bougie hotels, fans make time and space for electronic music, and that’s “very important in order to continue building our city’s music community.”

“My advice to anyone feeling the pressures of the music industry is to move at your own pace. Don’t compare yourself to others," she says. "Just focus on yourself, your craft, and your health, and in due time, you will find what you’re looking for.”


The stresses of performing onstage are not foreign to local up-and-comer Yazmine Rosario, age 20. The South Florida DJ, model, and stylist aims to inspire young women by showing them they can become their own boss by chasing their dreams. Along the way, she says, “I’ve dealt with extreme anxiety since I was 16 years old. Once I started DJ'ing at major clubs in Miami at the age of 17, anxiety would definitely take a toll on me before every set.”

Those troubles persisted during her career. “Last year, DJ'ing at major festivals and venues around the U.S., I would always have extreme stomach pain and nausea before and during the beginning of a set,” she recalls. The mere thought of performing caused stress, suppressing her appetite and leaving her with little energy for shows. But recently, Rosario has been able to overcome many of these obstacles and curb regressive behaviors by thinking positive thoughts to offset her subconscious doubts. She also credits “good friends that were aware of my situation and would text me from time to time reminding me to eat, meditate, etc."

“I’m aware of it all now, and I’m still working on never getting back to that place again. This industry can bring us a high that is very hard to let go of, but we have to stop glorifying pain for the reason we create music and realize that without health, we have nothing.”

If you or someone you know is struggling with depression or suicidal thoughts, call the National Suicide Prevention Lifeline at 1-800-273-TALK (8255); the Veterans Crisis Line and Military Crisis Line at 1-800-273-8255, press 1; or text the Crisis Text Line at 741-741.
KEEP MIAMI NEW TIMES FREE... Since we started Miami New Times, it has been defined as the free, independent voice of Miami, and we'd like to keep it that way. With local media under siege, it's more important than ever for us to rally support behind funding our local journalism. You can help by participating in our "I Support" program, allowing us to keep offering readers access to our incisive coverage of local news, food and culture with no paywalls.
Make a one-time donation today for as little as $1. 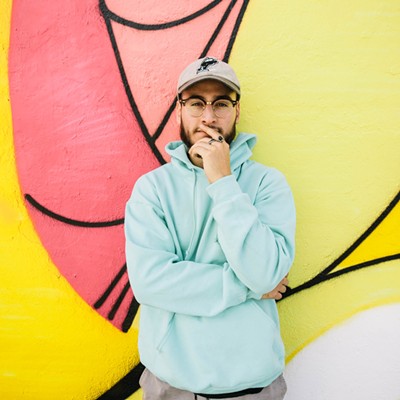