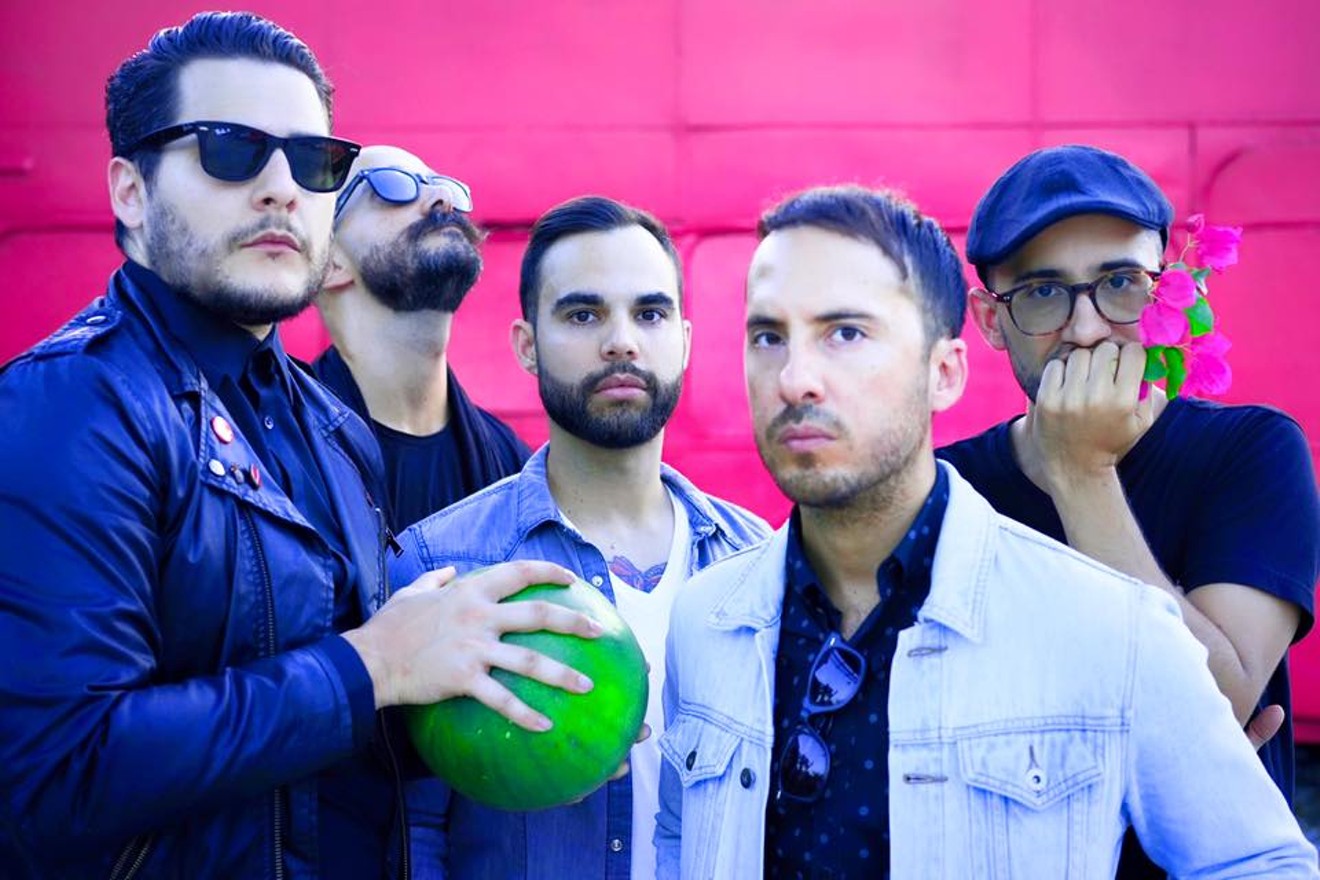 Garundt
A member moving to Hong Kong would be the death knell for most Miami bands. But the indie-rockers of Modernage are continuing to put out music even with guitarist Xavier Alexander living half a world away. Proof of this long-distance relationship comes with their new music video, "Sideways," premiering below.

"You'd think working together would be a lot more difficult," singer Mario Giancarlo says, "but Xavier has been finishing up music we did when we were all together. 'Sideways' is the second track out of a vault of music we feel deserves the light of day. We had difficulty finishing it in studio. He found a producer to polish it with our remote approval. But if we needed to, we could have done our parts in a studio and Dropbox'ed it to him."

Although they have about three unreleased albums' worth of unfinished songs that Alexander could have worked on, Alexander says "Sideways" spoke to him in particular after he tripped on ayahuasca. "The idea of a feminist-goddess entity stuck with me. I wanted to use that image in a video. Through our lives, we learn about the divine as a male aspect. I opened my eyes to what nature is all about. It's not all positive. There's a darkness to it, which touches on the themes of our music."

Alexander directed the black-and-white video using an old iPhone 5 at the abandoned village of Fung Hang, close to Hong Kong's border with China. "We have a tradition in the band of our guitarist Garcia Freundt directing the videos. I shot this one trying to stick with his aesthetic, influenced by Anton Corbijn."
The Miami-based members of Modernage are pleased with the results. "I like the video," Giancarlo says. "I've always been attracted to the darker side of things. I don't want to use the word 'goth,' but there's a dark undertone. The video rounds up nicely."

The lyrics to the song came about slowly, Giancarlo says. "It started at a full band rehearsal where the gist of the chorus came out. At a piano session, we filled out the melody of the verses. I wasn't sure where it was going, but it became about the disdain of when people get caught up with what's in style and the sadness of fans." He was pleased that his bandmate had a different interpretation of the lyrics. "Once songs leave our head, they're not ours anymore. I don't impose how they should be received. The songs change for me. Songs I wrote ten years ago have different meanings for me now."

So even though its members are 12 time zones apart, Modernage strives to continue to be a cohesive band, one that will even continue to play live shows. "I don't have a date," Alexander says, "but the plan is, when I get back to Miami, to play some shows. We're also talking about playing a show in Asia or maybe Europe. It might be acoustic if we can't get everyone together."
KEEP MIAMI NEW TIMES FREE... Since we started Miami New Times, it has been defined as the free, independent voice of Miami, and we'd like to keep it that way. With local media under siege, it's more important than ever for us to rally support behind funding our local journalism. You can help by participating in our "I Support" program, allowing us to keep offering readers access to our incisive coverage of local news, food and culture with no paywalls.
Make a one-time donation today for as little as $1.