BabyTron Is Toying With Your Favorite Rapper 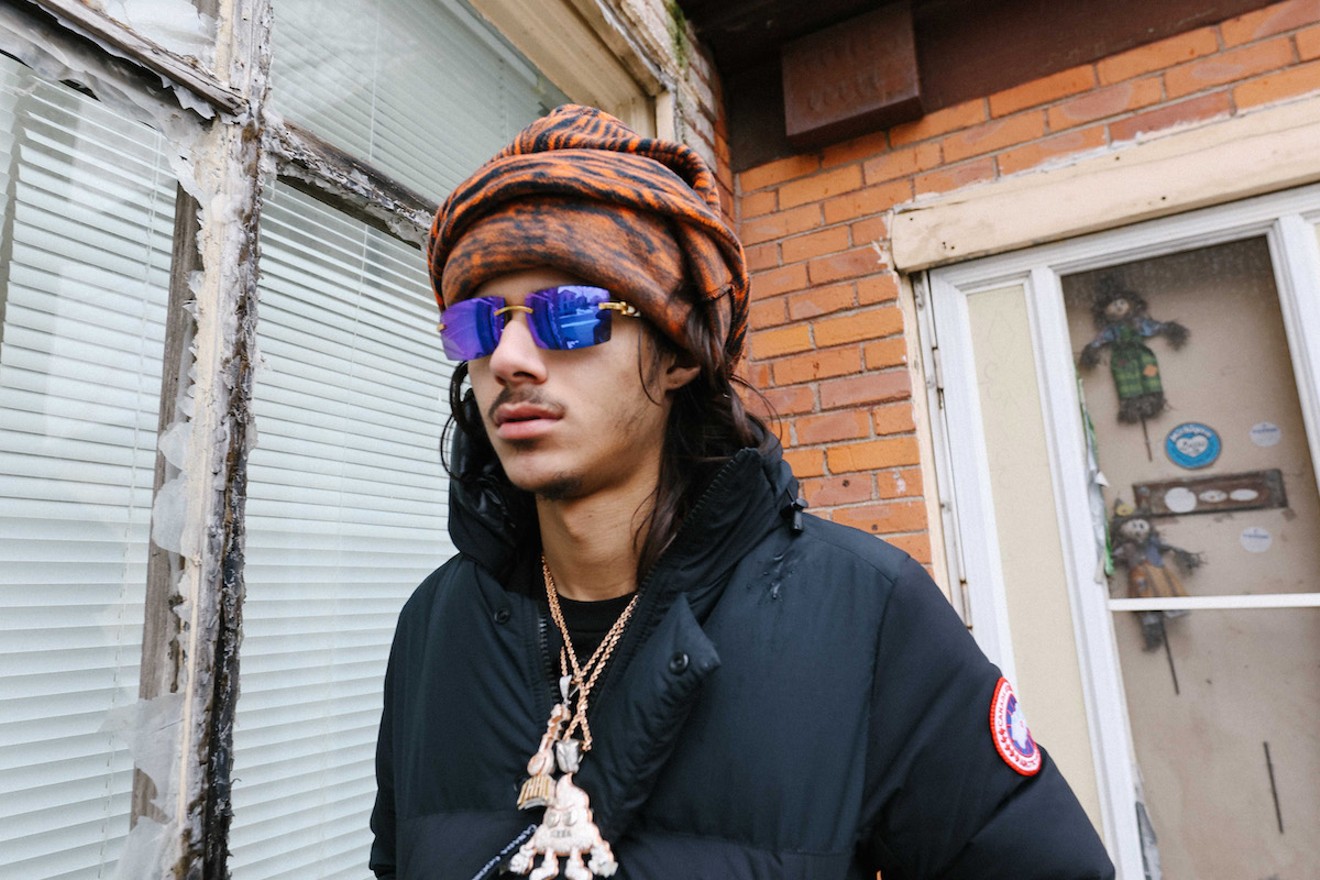 Despite his off-kilter humor, BabyTron continues climbing up the ranks. Photo by Belton Media
Why the hell would somebody ever rap over 21 different beats on the same song?

No, for real, why would you do that?

On the track "Emperor of the Universe," 22-year-old Michigan rap antagonist BabyTron flies through a smorgasbord of instrumentals pulled from all sorts of familiar faces. Kinda like mixtape-era Lil Wayne, Tron hijacks your favorite rappers' most recognizable beats so nonchalantly that it's hard not to respect it.

Oh, and this isn't even the first (or second) time he's done this.

In no way does it make sense to have "Mask Off" by Future sandwiched between Yeat's "Sorry Bout That" and Outkast's "Ms. Jackson," but here we are, awestruck at the fact that this white-passing lanky dude in Cartier glasses is finding a new way to float on every beat.

For those still scratching their heads, BabyTron started bubbling in the Detroit scene in 2018 as one-third of the adolescent rap group non-jokingly known as the ShittyBoyz. Alongside members StanWill and TrDee, Tron turned heads sporting a Bieber bowl cut while hilariously spitting smug punchlines and rapid-fire pop-culture references over up-tempo samples that sound fresh out of Game Show Network.
"Flyer than an alien in these Human Races/Feel like Gohan, I'm punchin' like a Super Saiyan/Hoes used to hoe me, now they got the stupid faces/Send a bullet at his face, he better hope he do the Matrix," BabyTron raps on "Super Smash Bros," a 2019 cut featuring StanWill and scam rap extraordinaire Teejayx6.

Before long, BabyTron's name began circulating like crazy outside of Detroit. While his tight-knit bond with ShittyBoyz has continued to hold, the internet's attention collectively swayed toward his solo work, starting with his 2019 debut, Bin Reaper. Tron's poignant humor makes it easy to label him as a gimmick until the hook on "Lost It."

As of June 2022, he has six solo projects to his name, five more with ShittyBoyz, and one with each member of the trio. Nowadays, his dark hair is past his shoulders, his eyes are perpetually hidden behind sunglasses worth a couple thousand dollars, and he has somehow managed to become even cockier behind the mike. Not to mention his propensity to rock designer streetwear with a pair of Crocs more often than not.

His latest project, Megatron, was released in March, and the title pays homage to Detroit Lions legend Calvin Johnson, who earned the Transformers villain nickname for his tenacity and physical prowess. Like Johnson, BabyTron is increasingly prolific and puts Detroit on his back, unlike anyone else in Gen Z.
As he's gotten older, the puerile sense of urgency in BabyTron's delivery has been toned down a few notches. His vocals on "Manute Bol" reflect the deadpan finesse you'd expect to hear from the voice of a therapist. However, the comparisons end right there; he's still rapping about smoking Backwoods and racing muscle cars on the freeway.

The past decade has shown that the rap scene in South Florida is a far cry and a half from where Tron stems from. Artists down here are much more inclined to rap exclusively in triplet flows over brash, bass-boosted beats at a slower tempo. Florida rappers and producers place more emphasis on vocal effects, spacier samples, and off-kilter melodies.

Despite this, BabyTron is poised to shake the room during his show at the Joint of Miami on June 29. He's established himself as a powerhouse that's stayed true to his roots and has gained a dedicated following in the process. Along with fellow Detroit rapper Babyface Ray, his work up to now has landed him a spot on the 2022 XXL Freshman List this past week.

If anything, it's only up from here for him.

BabyTron. 7 p.m. Wednesday, June 29, at the Joint of Miami, 2010 NW Miami Ct., Miami; 786-860-5634; thejointofmiami.com. Tickets cost $30 to $250 via eventbrite.com.
KEEP MIAMI NEW TIMES FREE... Since we started Miami New Times, it has been defined as the free, independent voice of Miami, and we'd like to keep it that way. With local media under siege, it's more important than ever for us to rally support behind funding our local journalism. You can help by participating in our "I Support" program, allowing us to keep offering readers access to our incisive coverage of local news, food and culture with no paywalls.
Make a one-time donation today for as little as $1.
Olivier Lafontant is an intern for Miami New Times. He's pursuing a bachelor's in digital journalism at Florida International University. He specializes in music writing and photography and got his start as a writer for South Florida Media Network in 2021.
Contact: Olivier Lafontant
Follow:
Twitter: @oliviersaidhi
Instagram: @oliviersaidhi