Techno Pioneer Derrick May on Dance Music's Radical Potential: "What We Did Was a Social Revolt to the Entire Fucking World" 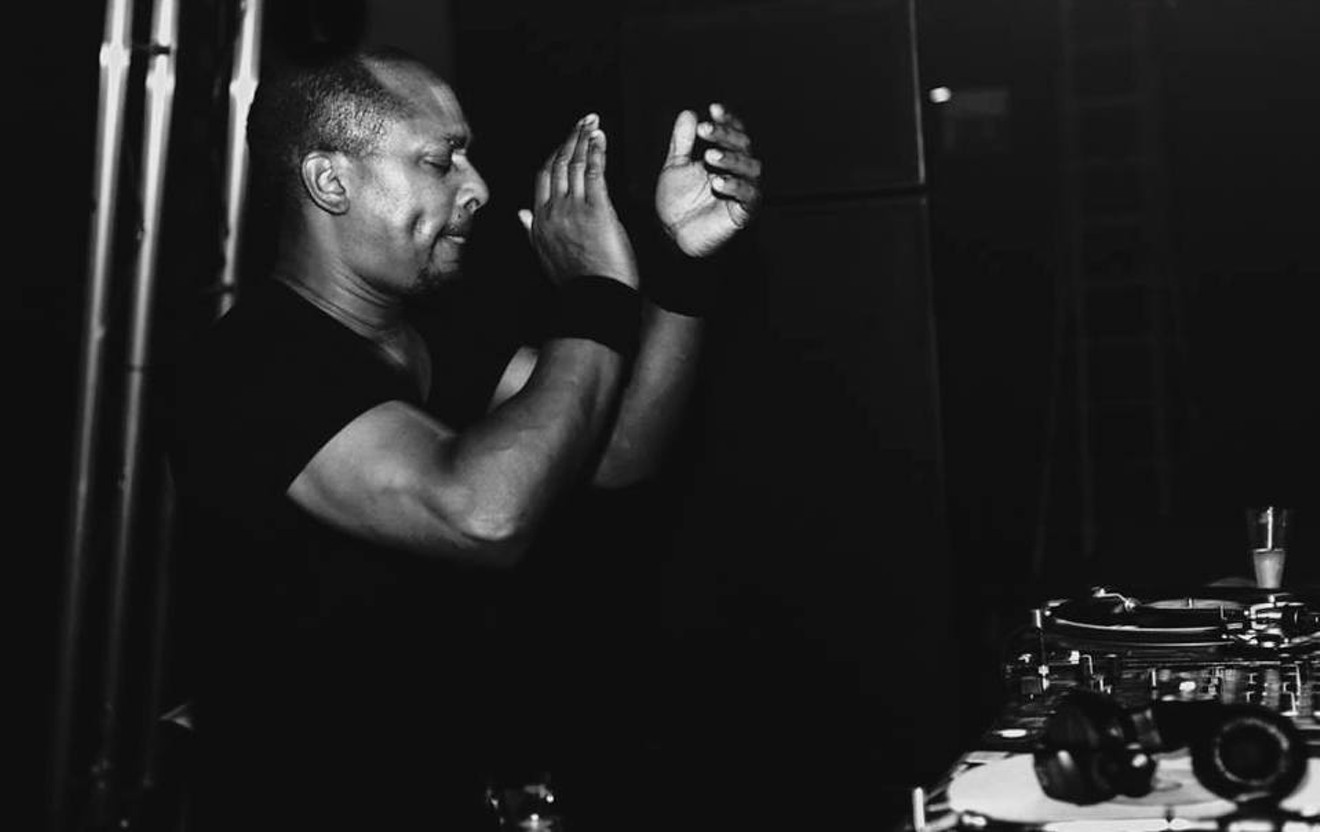 Derrick May Photo by Kate Vredevoogd
Derrick May is not one to bite his tongue. By all accounts, the 56-year-old Detroit native has earned the right to speak his mind and then some: As one-third of the so-called Belleville Three — named for the Detroit suburb where he and collaborators Juan Atkins and Kevin Saunderson grew up — May was pivotal in organizing the parties and producing the songs that would later congeal into the monolithic, world-conquering genre of music we all know today as techno.

Several decades, countless memorable tunes, and millions of changed lives later, it's not an exaggeration to assert that May's work transformed the world around him. But like a loving parent who only wants to see their baby flourish, the DJ/producer has no qualms about critiquing the present state of dance culture.

“All of this technology, all these opportunities, all this availability in front of us has created a laziness — a void of people's imagination, desire, and will to go out and hunt anything,” May says of dance music’s current creative prospects. “A lot of growth has been sort of stunted with the development of a sort of worldwide music scene... And there's so much more to this. There's so much more depth and so much more quality to it that has never really been discovered or discussed.”

Florida festivalgoers will have the chance to witness May's lofty dance-floor ideals firsthand this Thursday, March 5, at Okeechobee Music & Arts Festival. He'll be DJ'ing at the four-day gathering's electronic music-centric Jungle 51 stage, where he'll be joined by the likes of fellow trailblazer Lil Louis and Louisahhh.

May’s ability to speak truth to power and persuade people to lend him their ears stems from his reputation as an innovator: Whether it's with regards to his original songs or his DJ'ing, his name is frequently dropped in conversations about all-time dance music greats, techno or otherwise. Many artists have spoken openly about their admiration of him and his influence. DJ Bone — a peer of May's in the Detroit techno canon who has made many a Miami nightclub cameo — observed in a Resident Advisor feature that his predecessor's boldness as a selector has sometimes seen him become outright confrontational with crowds.

May says he approaches DJ'ing with an attitude that's equal parts selfish and determined.

“I approach every performance the same: I never care about what people want to hear,” he says, adding he has retained the same outlook he held at 15 years old while DJ'ing alongside Atkins. “We were going to force people — one way or another — to listen, to learn, and to like. When I play, I play with vigor and determination; people will feel my passion, feel my desire to do what I do. And when I go out, I'm an assassin — I ain’t gonna lie. I play old music, I play classics, I reach for demos that nobody has, I'm playing records given to me by kids — I don't care. If it's great, I'm going to play it, and I'm going to try my best to pay attention to how people respond, because if they don't respond enough, then I go deeper. That's what I do.”
Although it might offend purists of the very genre he helped to create, May’s anything-goes perspective reflects the initial principles techno was built around. The Motor City-born music style emerged from a singular vision of the world as informed by synth-pop pioneers such as Yellow Magic Orchestra and Ultravox as it was Detroit's machine-heavy history. One of May's best-known songs, "Strings of Life," stands in stark contrast to the dour tone with which contemporary techno is generally associated. Deploying little more than well-placed percussion and inventive string samples, the track is among the most celebratory and joyous dance-floor heaters ever recorded. "Strings" could be heard in Miami nightclubs as recently as March 2019, when Glaswegian DJ duo Optimo dropped it during the closing moments of its final set at the dearly missed Electric Pickle.

May's penchant for moving productions extends beyond techno: his "Illusion First Mix" of the 1989 cut “Sueño Latino” remains one of the most beautiful Balearic songs ever produced, and would not be an unwelcome addition to his Jungle 51 set.

Even as May enjoys his status as one of techno's foundational architects, he can also lay claim to what might be an even more distinguished honor, namely, inspiring one of the geekiest music nerd T-shirts ever made. Turbo Island — a Bristol, England-based illustrator and apparel brand — released a techno-themed tee and poster based on the Boy Scouts of America's archaic but charming guide to tying knots. The Turbo take blends the names of historically useful rope knots with celebrated techno artists such as Aphex Twin, Jeff Mills, and Helena Hauff. Naturally, the piece is titled "Strings of Life." It's a small, all-but-esoteric detail, but the fact that May's work is the umbrella under which all of his peers are categorized speaks to his stature in the world of dance music. (“This is great,” May says, responding to a text message sent post-phone interview sharing the image. “I didn’t know anything about it, but I must admit it’s pretty clever.”)

Given his prestige and wide-ranging impact on music, May is more than well qualified to speak about what he perceives as shortcomings in dance culture. Same as it ever was, May’s concerns are succinctly captured in the lone line from DJ Shadow’s “Why Hip-Hop Sucks in ’96”: “It’s the money.”

“No one is hunting or looking for creative things anymore: The promoters are no longer promoters — they're hedge-fund boys; they're MBAs. They have nothing to do with the music,” he says. “These are words that are now attached to dance music: global brand; multiple events; development stages of product placement and product development... We're talking about the mountain of conglomerates that are creating an industry within an industry and pushing out all of the talent, because it's not relevant. It's not a part of anything significant within the realm of making money... That's the devastation of an art, and everyone seems to have forgotten that dance music is an art form and it could easily be destroyed with reckless decisions.”

Although May’s arc has been well documented in books such as Last Night a DJ Saved My Life and Energy Flash, as well as the forthcoming Detroit techno documentary God Said Give 'Em Drum Machines, he says he thinks younger generations have difficulty fully comprehending just what he and his friends accomplished all those years ago.

“It's weird because 90 percent of everything we did was pre-internet,” he says, drawing a parallel between the way the remains of ancient Rome are viewed and how classic Detroit techno is regarded. “It's just almost impossible for people to really be able to grasp that we were able to do so much without the abilities that people have today. There are those who don't understand it because they don't understand that point of creativity: When they look at a Dalí painting, they can't imagine that Dalí was able to put this on canvas, but before he did it on canvas, he did it on a sketchbook, and before it was on a sketchbook, it was a dream. They're not able to bring that to a point of their own current reality.

“Yes, it's mythical, it's legendary, but a lot of people don't believe it. It's kind of frustrating," May adds. "We live in a weird place."

Despite his disillusionment, May still possesses faith in the power of youth-led cultural revolutions — such as the one he took part in — and believes dance music may yet have a role to play in long-overdue societal shifts.

“There's something about human instinct and human behavior that gravitates towards moments of change that we don't control. It controls itself; people will get tired; they will get fed up; they will have had enough. And that is what happened when we created techno music, the explosion that it had in England, how it evolved around the world,” May says, comparing dance culture's influence on social changes to the civil rights movement and Woodstock's effects on the radical mood of the 1960s. Remarking on his own role in musical history and how the past informs the present, May notes that he, Atkins, and Saunderson were all inspired by forebears such as Kraftwerk and Gary Numan.

“What we did was not an intellectual movement such as what those guys did. It was not just something 'cool.' What we did was a social revolt to the entire fucking world... And it's going to happen again. If you want to talk about musical changes, that's going to always happen; there will always be some trendy music. But as far as a social revolt — a worldwide revolution of some sort creatively — it's coming. It has to.”

Derrick May at Okeechobee Music & Arts Festival 2020. With Blood Orange, Clairo, Durante, Ghostland Observatory, Vampire Weekend, and others. Thursday, March 5, through Sunday, March 8, in Sunshine Grove, 12517 NE 91st Ave., Okeechobee. Tickets cost $119 to $699 via okeechobeefest.com.
KEEP MIAMI NEW TIMES FREE... Since we started Miami New Times, it has been defined as the free, independent voice of Miami, and we'd like to keep it that way. With local media under siege, it's more important than ever for us to rally support behind funding our local journalism. You can help by participating in our "I Support" program, allowing us to keep offering readers access to our incisive coverage of local news, food and culture with no paywalls.
Make a one-time donation today for as little as $1.