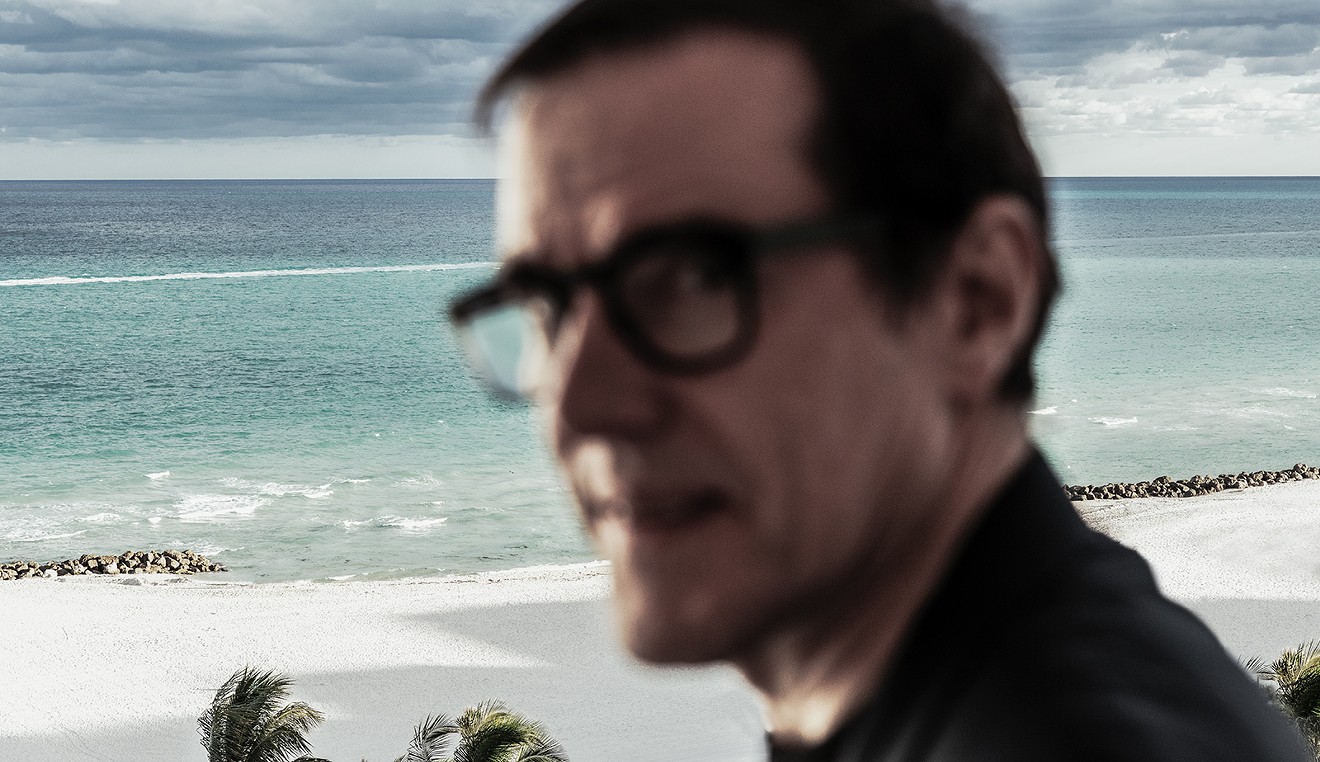 Drummer Stephen Morris and his New Order bandmates are set for a four-night residency at the Fillmore Miami Beach. Photo by Warren Jackson
Stephen Morris admits he's "a bit fed up" with his band's most famous song. The drummer for New Order has spent nearly four decades performing "Blue Monday" to reverent fans around the world and reckoning with the song's wide-ranging influence. Adding to its perennial popularity, "Blue Monday" is enjoying yet another moment in the public consciousness owing to a cinematic one-two punch: the presence of its “'88" remix in 2018's Ready Player One and the song's prominent placement in last month's Wonder Woman 1984 trailer.

"They've done a kind of orchestral version of it, and I've always kind of felt, Oh, no, not an orchestral anything, really," Morris says of the Wonder Woman teaser. "I'm a bit — not a stick in the mud; it's just that electronic music is electronic music, and when you try to do it another way, it kind of loses something. It's a really powerful arrangement they've done. But, you know, we've got other songs they could use."

Morris and his bandmates will make full use of New Order’s considerable catalog in the immediate future. Tuesday, January 14, through Saturday, January 18, the groundbreaking synth-rock act will play a four-night residency at the Fillmore Miami Beach — the first time the band has done anything of the sort.

As countless music journalists and multiple feature-length movies have attested, New Order grew out of the band Joy Division, which formed in Manchester, England, in 1976 and rose to prominence with a blend of postpunk and dark, moody sensibilities channeled through the troubled psyche of lyricist and lead vocalist Ian Curtis. His lifelong battle with epilepsy ended with his suicide on the eve of Joy Division's first U.S. tour in spring 1980. The band's surviving members formed New Order and added keyboardist Gillian Gilbert. (Morris and Gilbert married in 1994.)

Joy Division's brief life is immortalized onscreen in 2002's classic fictionalized biopic about Factory Records, 24 Hour Party People. During a humorous scene set during the recording of the group's debut LP, Unknown Pleasures, producer Martin Hannett commands Morris to disassemble his drum kit and relocate himself to practice his parts on the recording studio’s roof. Later, after the rest of the band calls it a night and departs, the camera pans upward to Morris, still bashing away to the beat of "She's Lost Control."

Asked whether the roof exile actually occurred, Morris says, "That's the most-asked question. No, it's not true. It never happened," he deadpans. (For what it's worth, bassist Peter Hook — a Joy Division cofounder who would later depart New Order on acrimonious terms — has stated otherwise in several interviews.) Morris willingly concedes that the scene sums up what it was like to work with the eccentric Martin. The producer’s quirks paid off: Unknown Pleasures has stood the test of time as a classic and a work of staggering influence.

Morris says the Fillmore initiated New Order's upcoming residency following the success of the band’s 2016 and 2019 shows at the venue. “If you're going to spend four nights anywhere, Miami is probably one of the best places you could do it,” he quips.

New Order’s orbit has always seemed to include the Magic City as a focal point. On top of their frequent visits over the decades, a number of the bandmates' close friends reside in the city, including punk rock's elder statesman, Iggy Pop, who makes a guest appearance on New Order's 2015 release, Music Complete; novelist Irvine Welsh (Trainspotting); and longtime collaborator Arthur Baker, who will open all four nights at the Fillmore.

Morris also counts himself a fan of author Carl Hiaasen, as well as one of the city’s more infamous fictional depictions, Grand Theft Auto: Vice City. "I got very familiar with [Miami] just playing that game," he laughs. "One time when we came to Miami, I virtually knew my way around! I could probably drive through just by playing Vice City."

Stephen Morris of New Order.
Photo by Warren Jackson
He says the band is well aware of New Order's influence on the city’s music scene and nightlife culture.

"When we did Ultra Music Festival in 2012, the hotel that we were staying at was basically party central," Morris recalls. "There were parties all day and all night — just loads of people coming up to you, giving you feedback.

"Well, actually, when I say, 'Giving you feedback,'" he clarifies, "I mean, 'Stopping you from going to bed,' more like."

The band's most recent visit to Miami Beach saw its members presented with the key to the city. This time around, the municipality has declared Wednesday "New Order Day," and Miami Beach City Commissioner Michael Gongora will join the group onstage that evening to mark the occasion.


Thank you to @MichaelGongora and City of Miami Beach for presenting New Order with the key to the city - what an honour! Another good reason to return! #NewOrderMiami pic.twitter.com/UZSvemgOQ7

"I never thought we'd get the key to the city — Miami Beach, of all places!" Morris marvels. "It's absolutely incredible, really. So we're looking forward to that — maybe getting a bigger key this time."

In the meantime, New Order has been keeping busy with rehearsals. Morris says the band views the four-night residency as an opportunity to tinker with its increasingly experimental live show. To that end, Tuesday's Fillmore performance will be a modified version of New Order's 2017 concert at the Manchester International Festival, a deep-cut-heavy set that included several Joy Division songs and was released as a live album in July 2019.

"It took an awful long time before I could listen to Joy Division and appreciate it for what it was because it was so tied up with the death of Ian and everything,” Morris says. "It's nice to listen to Unknown Pleasures now and hear it as another band basically. It's like listening to a band like the Velvet Underground, and it's like, Wait, was I part of that?"

As for the other nights, Morris says to expect variations on a theme. "We'll try to change it as much as we can," he says. "It's really good to say, 'Oh, yeah, play different songs every night,' but the thing we've found in rehearsing for this is that there's a hell of a lot of songs to rehearse. So we spent a lot of time remembering how they go."

Although he and Gilbert are occupied with composing a film soundtrack, Morris says the deep dive into the back catalog has motivated New Order to consider a return to the recording studio sooner rather than later.

"We did a lot of listening to our old stuff. And it's interesting when you do that because it kind of inspires you in a way to write something new," he says.

"But we haven't done that yet. We've never really planned ahead."

New Order. With Arthur Baker and Rocker's Revenge. Tuesday, January 14; Wednesday, January 15; Friday, January 17; and Saturday, January 18, at the Fillmore Miami Beach, 700 Washington Ave., Miami Beach; 305-673-7300; fillmoremb.com. Tickets cost $78.50 to $250 via livenation.com.
KEEP MIAMI NEW TIMES FREE... Since we started Miami New Times, it has been defined as the free, independent voice of Miami, and we'd like to keep it that way. With local media under siege, it's more important than ever for us to rally support behind funding our local journalism. You can help by participating in our "I Support" program, allowing us to keep offering readers access to our incisive coverage of local news, food and culture with no paywalls.
Make a one-time donation today for as little as $1.