Desert Hearts Ringleader Mikey Lion's Debut Album, For the Love, Was Years in the Making 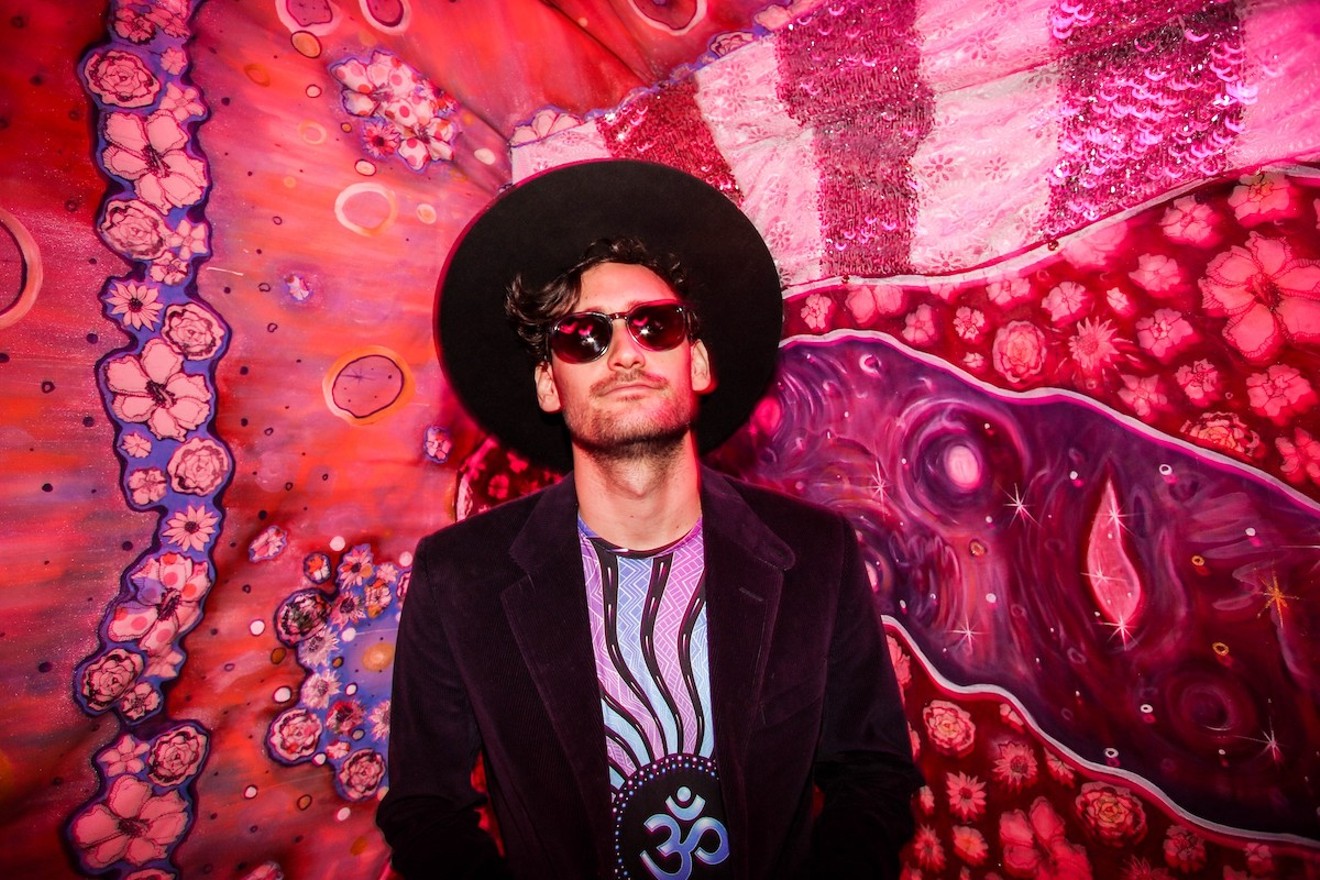 DJ/producer Mikey Lion reveals his debut album, For The Love. Photo by Out Here Visuals
Kaleidoscopic house and techno collective Desert Hearts threw one of Miami’s last buzzing bacchanals before COVID-19 effectively shut the world down.

Ringleader Mikey Lion flourished across the decks, sporting his signature flat-brim hat and an ear-to-ear grin as he announced to his revelers, “This is a track from my debut album that I’ll be dropping soon!”

Little did he know about the impending global pandemic that would soon kneecap the music industry. But for Mikey Lion — real name Mikey Leon — being forced off his breakneck touring schedule and into quarantine with family in San Diego allowed him to finish the aforementioned debut, For the Love.

Leon dreamed up the concept behind For the Love in 2012 when he and his co-conspirators threw the first Desert Hearts party in San Diego. Alongside his brother, Porky, and their collaborators Marbs and Lee Reynolds, Leon wanted to create a judgment-free oasis built on the mantra “house, techno, love – we are all Desert Hearts.” The festival was created as a beacon of creativity and self-expression where weirdos of all stripes could put their eccentric antics on full display. 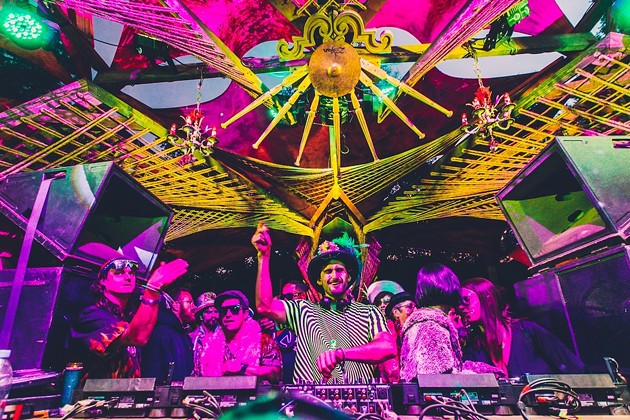 Mikey Lion performs at Desert Hearts Festival at Los Coyotes Indian Reservation.
Photo by Sean Sirisap Soodyod
Since then, the dusty DJ crew evolved into an international party brand that sells out its namesake festival each year, performs at hundreds of shows annually around the globe, and runs its own label, Desert Hearts Records.

“Everything I've done with Desert Hearts has been based on trying to spread as much love and positive energy in the world as possible,” Leon explains. “Doing it 'for the love' has always been our motto as we try to show people how to love each other and teach people how to build loving communities like ours.”

For the Love is a culmination of Leon’s nearly decade-long Desert Hearts journey, exploring themes of love, connectivity, and the roller coaster of finding and pursuing purpose in this tumultuous world. The nine-track album is Leon’s most ambitious release to date, careening through an underground multiverse of melodic floaters, ethereal synth atmospherics, and blistering techno thumpers that’ll leave listeners gobsmacked.

Although For the Love is a celestial electronic album, the 32-year-old beat maker’s sonic journey began with his love of hip-hop. Leon’s adolescence was spent obsessed with Wu-Tang Clan and A Tribe Called Quest, spurring his love for scratching and turntablism. At age 13, when his parents offered to buy him any instrument he wanted, he requested the Technics SL-1200 and was promptly denied; his folks were hoping he'd pick a “real instrument, like a piano.”

Leon saved up enough money to purchase his own turntables and mixers, then taught himself how to spin through online tutorials. When his parents recognized his dedication to the craft, they reimbursed him for the equipment and have since become his biggest fans. His mom, Annie, is a staple at the annual Desert Heart Festival near their San Diego home, cheering on her sons Mikey and Porky (real name David) and making attendees feel like they, too, are part of the family. 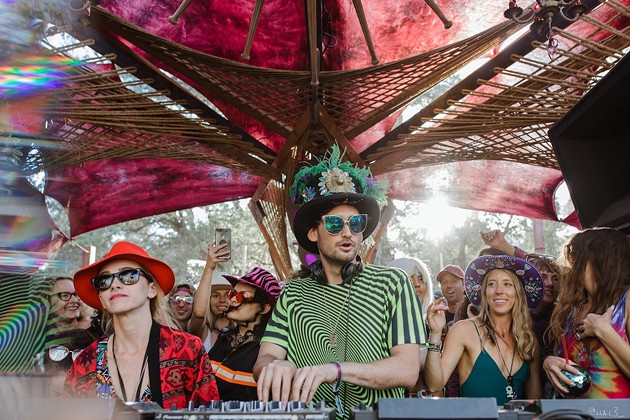 Mikey Lion's mom Annie looks on from the left corner as her son performs at Desert Hearts Festival.
Photo by Haley Busch
These days, Annie supports her sons under the screen name "DHmamalion," a mainstay in the Desert Hearts Twitch channel chat aptly named DHTV. Launched one week after the pandemic forced the collective to cancel its 12th-annual festival, DHTV hosts rotating musical programming each week and has reached almost 100 million viewers since its March 2020 inception. Its digital exchanges fill the isolating void left by 2020's concert cancellations and mirror the festival’s homegrown ethos of togetherness and belonging.

“We went from a crazy touring schedule to all of a sudden having no connectivity or fan interaction,” Leon says. “We created a place for our Desert Hearts community to hang out with each other online, despite the fact that we were all physically separated. It was super important to give our fans and ourselves an outlet to release during such a tough time. And then, all of a sudden, we were one of the top five music channels on Twitch and being featured daily on the Twitch homepage, and it was mind-blowing to have thousands of people joining our streams.”

Leon officially announced For the Love on DHTV during his weekly Lion’s Den show. He teased the LP’s first single, “Above the Clouds,” a house-heaven anthem that Miami fans instantly recognized from his set at Club Space in March.

His next single, “Do or Die,” was a tech-fueled collaboration with longtime cohort Sacha Robotti. The track’s squelchy acid line and menacing loop were a far cry from the first single's sonic dreamscape and showcased Leon’s dexterous ability to produce underground music across the sound spectrum. 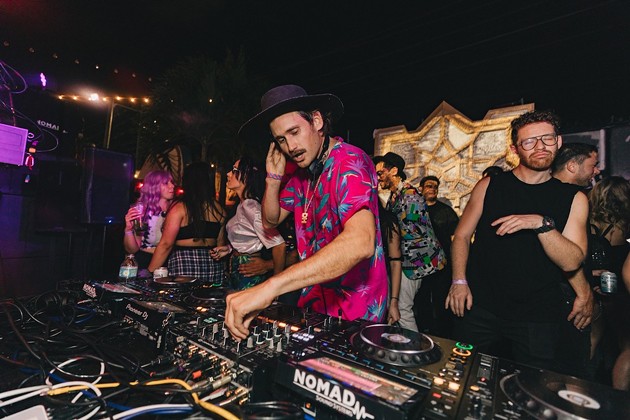 Mikey Lion performs at Desert Hearts' Miami showcase in May 2021.
Photo by Kathy Rosario/KathySnapped
The album’s most notable collaborator is What to Do label head and darling of the underground Justin Martin. Their joint effort, “Through the Fog,” marks the zenith of Leon and Martin’s long-standing friendship, which began in 2012 when Leon and Marbs booked Martin in San Diego as the first big name to perform for their pre-Desert Hearts party series, Jungle. Martin invited Leon to his San Francisco home to write their record, which was scrapped and rewritten months later on a second trip to the Bay Area.

“Justin has always been my musical hero, and it’s such a full-circle moment to have him on my album,” says Leon.

Most recently, Leon rinsed “Through the Fog” alongside a plethora of other album tracks at Desert Hearts’ Miami showcase last month. The open-air affair stretched across 14 hours in typical fashion — a nod to the Desert Hearts Festival marathon format, which programs more than 100 uninterrupted hours of underground music under the principle of “one stage, one vibe.”

Mia Sarno, a San Diego native who attended the flagship festival for years before moving to Miami in 2019 to work as a psychologist, described the experience as food for the soul.

“The Desert Hearts dance floor has always been a nurturing and safe place for me to thrive,” Sarno elaborates. “I don’t know if it’s because we were all deprived of live music for so long, but the Miami show truly filled my heart back up to the brim, and it gave us all hope that we will be able to return to ‘normal’ soon. Maybe even something better than normal."
KEEP MIAMI NEW TIMES FREE... Since we started Miami New Times, it has been defined as the free, independent voice of Miami, and we'd like to keep it that way. With local media under siege, it's more important than ever for us to rally support behind funding our local journalism. You can help by participating in our "I Support" program, allowing us to keep offering readers access to our incisive coverage of local news, food and culture with no paywalls.
Make a one-time donation today for as little as $1.

Jaime Sloane is a Denver-based freelance journalist who specializes in music coverage and storytelling. Since graduating from University of Florida’s College of Journalism and Communications in 2014, her work has been published in the print and online versions of Grammy.com, Miami New Times, DJ Mag, SF Weekly, and DJ Times.
Contact: Jaime Sloane
Follow:
Twitter: @sloanesayz