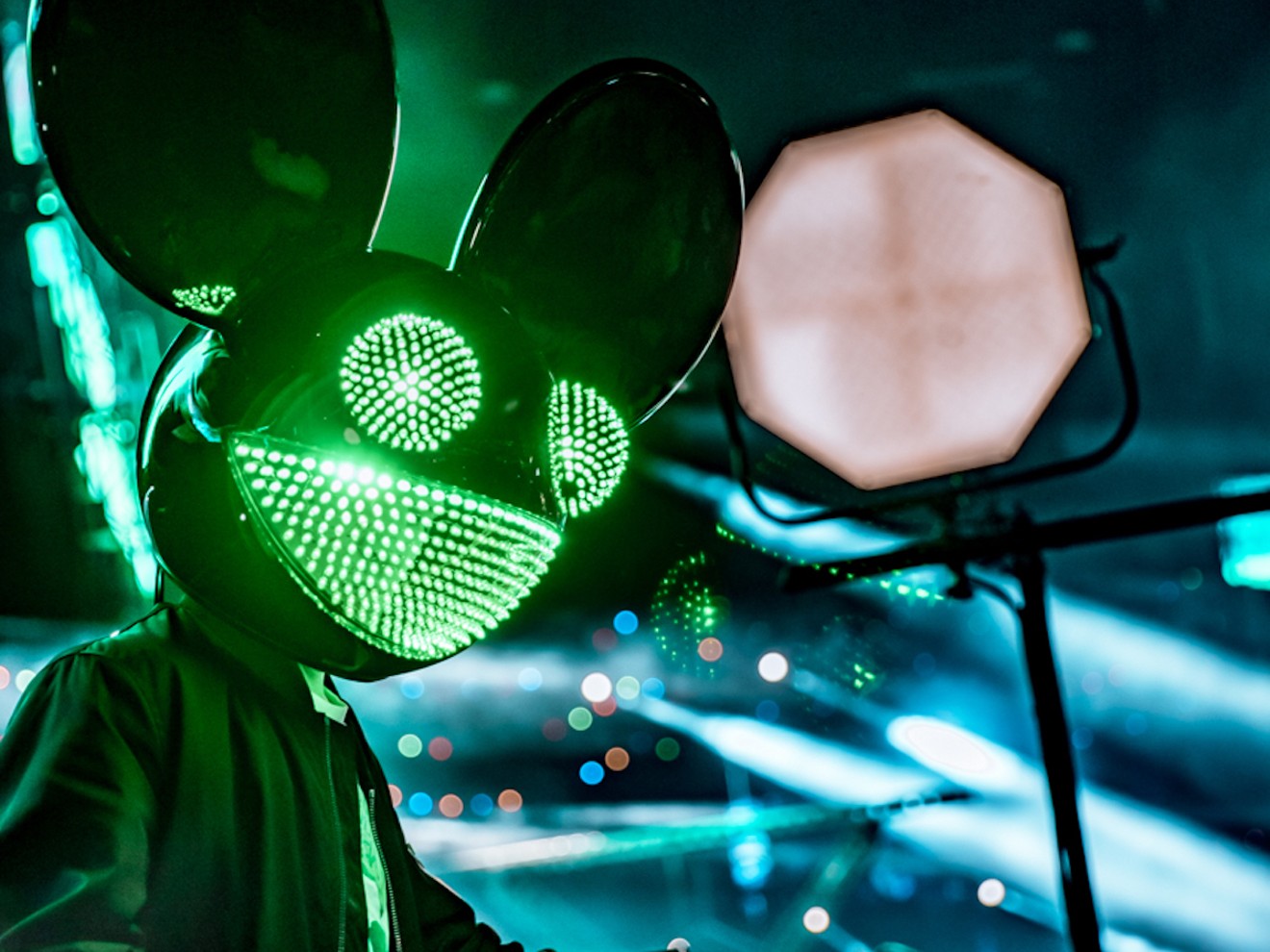 See the many sides of Deadmau5 this weekend. Photo by Leah Sems
Electronic musician Deadmau5 (AKA Joel Zimmerman) is taking over Miami this weekend with Day of the Deadmau5, which runs from Thursday, October 28, through Halloween night, with various events at different locations. The Canadian producer has expanded his annual one-off event into a four-day experience complete with a mau5hop pop-up, mau5trap Records showcase, and four exclusive chances to catch him play.

Tonight, October 28, he takes the stage at Island Gardens under his techno alias Testpilot. He'll drop a special Unhooked performance, a stripped-down version of his regular deadmau5 shows, at Oasis Wynwood on Friday, October 29. He'll do a daytime brunch set at the Wharf Miami on Saturday, October 30, and later that night, he'll don the iconic mouse head for a full production Day of the Deadmau5 headlining set to close the weekend out. And although not officially part of the weekend experience, Story Nightclub will host a Day of the Deadmau5 event on Sunday, October 31.

"I rarely get the opportunity to make a full weekend out of it," Zimmerman says of the opportunity to play three sets over Halloween weekend. Each set offers Zimmerman the opportunity to flex his skills differently. "I could do a throwback set. I could [say], 'Here's the hits. And here's shit I have nothing to do with,' and it's just a good time in the setting for the Testpilot stuff. I think it'll be a very fulfilling weekend for my soul."

It's also a weekend to showcase the stable of groundbreaking artists currently signed to the eponymous mau5trap Records imprint. Founded in 2007, the label was the launch point for artists like Skrillex, Feed Me, i_o, and Rezz. Friday's label showcase features current signees like Morgin Madison, Callie Reiff, and Spencer Brown. Zimmerman understands the label's ability to create stars.

"We end up being that springboard label," he explains. "We have the brand power. We have that promotional ship behind us."

Fellow Canadian artist Rezz was once part of the mau5trap family, and in 2020 she signed a deal with RCA, a subsidiary of Sony Music. Zimmerman says he's happy to see artists he had a hand in establishing move on to the next step.

"We're all for it because we can get them in and get them out. You know, not get them on lock then fuck them, and then make their lives miserable."

Zimmerman has long been a part of the dance-music community. He's an old-school raver with passion and love for the culture. The mau5trap showcase gives a small nod to the legacy of dance music. Legendary producer and Daft Punk collaborator DJ Todd Edwards will join the lineup on Friday afternoon.

Edwards has nearly three decades of experience behind the decks and will undoubtedly lead a masterclass on proper house and garage — a genre he's partly responsible for creating.

"I gotta carry the torch," Zimmerman explains about booking an artist who has had such an immeasurable impact on the scene. "This is kind of where it started for me. And I'm going to carry that through for the rest of my days. So why not bring it back? And that's beside the fact that he's, of course, an amazing talent."
The weekend also offers plenty of opportunities for Deadmau5 fans to connect outside of the club. Day of the Deadmau5 is just as much about community and world-building as it is about partying.

"I'm just super stoked to see the 'property' be something viable, that we can make a weekend out of it, and not just, 'Hey, buy tickets and come watch me dance around on stage with a mouse head,'" Zimmerman says. "It's a communal activity between all the dead mouse fans, and we're gonna have pop-up shops, meet and greets, just a wide breadth of activities to do in a weekend in Miami."

The Saturday pop-up, located at 1655 Meridian Ave. in Miami Beach, is a chance for fans to get together and pick up exclusive merch, enjoy music, and see some live artists. Zimmerman has long been passionate about visual art, and in 2020 launched his own NFT project, Rarez, and a collaboration with artist Robbie Trevino on Nifty Gateway. The pop-up will feature live art and exclusive NFT drops from Trevino and other artists.

"It's all going to be very exciting to basically bring together a lot of artists from both the visual side and of course the mau5trap family, like Speaker Honey and Spencer Brown," he says. "We got a whole audiovisual emporium that we were able to stretch out for the weekend."

The weekend will also see the launch of a new Deadmau5 single, "Hyperlandia," featuring Foster the People. The shimmering new single is a slow-burning adventure into a world of wavy synths, crispy beats, and the emotive voice of Mark Foster. Zimmerman has made a career out of genre-spanning work. "Hyperlandia" pulls that thread and sees him putting a modern spin on an eighties aesthetic.

"It was from an old project of mine called Anthological," he explains. After being convinced by others that he needed to expand on the idea, he sent the melody to Foster. "And then honestly, he took a couple cracks at it and just send it back. It was all pretty seamless."

It's indicative of how Zimmerman has worked with other collaborators like the Neptunes, My Chemical Romance frontman Gerard Way, and British artist Imogen Heap. He's consistently found new ways to expand upon his sonic palate and surprise fans in new ways. His evolution as an artist and curator is just an expansion of his personality.

He has a singular style that seeps through regardless of genre. "I'm always striving to reinvent or twist or bend to my will, Or make my own enjoyment out of it," he says about dance music. "Versus sitting on my ass and kind of taking it as it comes and saying, 'OK, well, I guess I have to enjoy this because this is everyone else's manifestation of what a good time is.' "

He's always been keen to create his path. Be it through his record labels, his music, or with the fresh concept he's spun Day of the Deadmua5 into.

When I ask him what excites him about the future of dance music, he quickly comments, "I think that's in everyone's own hands. Electronic music shouldn't be a passive experience. It should be a more culminated, willing participant thing to make how you want it."

Day of the Deadmau5. Thursday, October 28, and Saturday, October 29, at various locations. Tickets cost $289 via pollen.co. 11 p.m. Sunday, October 31, at Story Nightclub, 136 Collins Ave., Miami Beach; 305-479-4426; storymiami.com. Tickets cost $50 to $65 via tixr.com.
KEEP MIAMI NEW TIMES FREE... Since we started Miami New Times, it has been defined as the free, independent voice of Miami, and we'd like to keep it that way. With local media under siege, it's more important than ever for us to rally support behind funding our local journalism. You can help by participating in our "I Support" program, allowing us to keep offering readers access to our incisive coverage of local news, food and culture with no paywalls.
Make a one-time donation today for as little as $1. 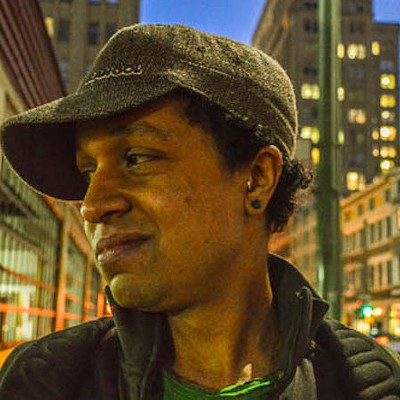