Felipe Servat poses next to his Britney Spears cutout outside the FTX Arena during a small demonstration he organized in February. Photo courtesy of Felipe Servat
In 2018, when Britney Spears started crying on stage during her final performance of the Piece of Me tour in Blackpool, England, Felipe Servat had a feeling there was a deeper issue beneath the pop star's emotional outburst. Following this experience and other questionable interactions during several meet-and-greets documented on his YouTube channel, Servat has been fighting for Spears' freedom ever since.

The 30-year-old Miami Beach resident is without a doubt Miami's biggest Britney fan, having attended all the major tours and concerts, following her as far away as Europe to see her perform. A fan since 2001 when he lived in Brazil, he even credits Spears for helping him come to terms with his identity as a gay man.

"It feels like she's my sister," Servat tells New Times. "She's always been so humble and kind."

Alongside other organizers, Servat is hosting a #FreeBritney rally in South Beach on August 7. Marchers will convene at Ocean Drive and 15th Street at noon, and at 1 p.m. they'll march a few blocks down Ocean Drive, turn right and march a few blocks west, and finally north on Washington Avenue to Lincoln Road.


Florida's #FreeBritney movement has been on the rise, especially following a big rally Servat attended held in Tampa earlier this month. Servat organized a smaller Miami demonstration in February, but he hopes the August rally will attract many more marchers.

Spears has been living under a legal conservatorship since 2008, when she was deemed unfit to manage her money and persona. The arrangement puts her father, Jamie Spears, in charge of her career, compelling her to continue to work while also policing her diet, medications, social media, social life, and more.

"I'm becoming an American next month," Servat says, "But I always say that even as a permanent resident of this country, I have more freedom than Britney Spears does." 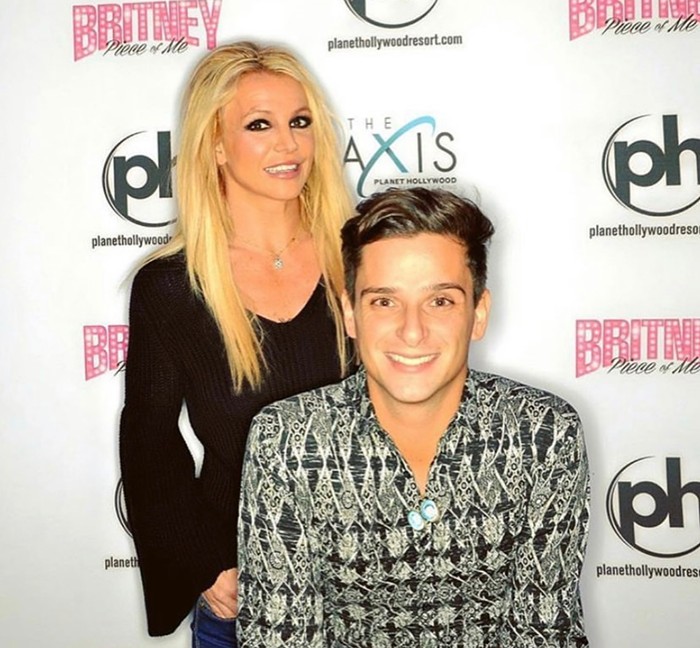 Felipe Servat meets his idol during Britney's Piece of Me tour.
Photo courtesy of Felipe Servat
Slowly but surely, as the #FreeBritney gained popularity, Spears has won small victories, such as choosing her own lawyer, driving her car, and addressing the court publicly. This month, Spears went as far to say she wouldn't perform while her father is in charge of her conservatorship.

She continually credits her fans with giving her a platform and the strength to continue her legal battle. Servat says seeing her gain more freedom is gratifying as a longtime #FreeBritney supporter.

"I would say we're stronger than yesterday because we're still gonna keep fighting for Britney," he says. "They used to call us kids that are creating conspiracy theories about Britney. Seeing her speak just reassured us that we were right."

This isn't Servat's first time speaking out against the conservatorship.


Spears' public meltdown in 2007 was confusing to a young fan with little to no context about what was going on, he says.

He hosts a podcast called Original Doll, where he discusses #FreeBritney and what it stands for. Recently, he interviewed Hailey Partridge, a North Miami resident who feels she lives under a similar legal arrangement with her parents.

With the Miami Beach march, Servat's goal is to continue to show support for Spears during her fight, to spread awareness about her situation, and to change the laws surrounding how conservatorships are created and regulated in the United States, where more than a million people currently live under such arrangements.

"The system is corrupt," Servat argues. "We are using our voices for all of these people that cannot use their voices. Even if Britney was free tomorrow, we're going to keep this movement going because we strongly believe if Britney gets her freedom, a lot of the other people under conservatorships will get her freedom as well."

#FreeBritney marchers will gather at noon at the intersection of Ocean Drive and 15th Street. At 1 p.m., the march will proceed a few blocks south on Ocean Drive, then head west, and finally north on Washington Avenue to Lincoln Road.
KEEP MIAMI NEW TIMES FREE... Since we started Miami New Times, it has been defined as the free, independent voice of Miami, and we'd like to keep it that way. With local media under siege, it's more important than ever for us to rally support behind funding our local journalism. You can help by participating in our "I Support" program, allowing us to keep offering readers access to our incisive coverage of local news, food and culture with no paywalls.
Make a one-time donation today for as little as $1.