Bad Bunny headlined Spotify's ¡Viva Latino! Live at the American Airlines Arena. See more photos of ¡Viva Latino! Live here. Photo by Jorge Martinez Gualdron
Miami tried to put on its best face Friday night during Spotify's ¡Viva Latino! Live concert at the American Airlines Arena. But after days of battling for hurricane supplies at grocery stores around the city, waiting in lines for gas, and anxiously awaiting for confirmation that Friday's show would go on in spite of the looming threat of monster Hurricane Dorian, the crowd's exhaustion was palpable. Though Miami showed plenty of love to headliner Bad Bunny and additional performers Nicky Jam, Rosalía, Sebastián Yatra, and Sech, the audience was significantly more subdued than it typically is at marathon multi-performer concerts such as ¡Viva Latino!

Of course, in Miami, even hurricanes are an excuse to party, and the performers threw a respectable perreo to get everyone's minds off of the approaching storm. There were still some reminders, including a brief downpour outside the venue just before the show began. But ¡Viva Latino! attendees still faired better than Rolling Stones fans in Miami Gardens, who got soaked during the veteran band's tour closer at Hard Rock Stadium a few miles away.

More than half the seats at the Triple A were still empty before opener Sech took the stage shortly after 8:30 p.m. But the venue filled up in a flash with stragglers who ran in to catch a glimpse of the rising star, who is new to American audiences at large but has built a significant following among Latin American fans. After the crowd sang along to most of the songs in his roughly 20-minute set, they were treated to a video where the singer went back to his native Panama to showcase his roots and detail his upbringing. "I want people to know that there's talent in Panama," he said. 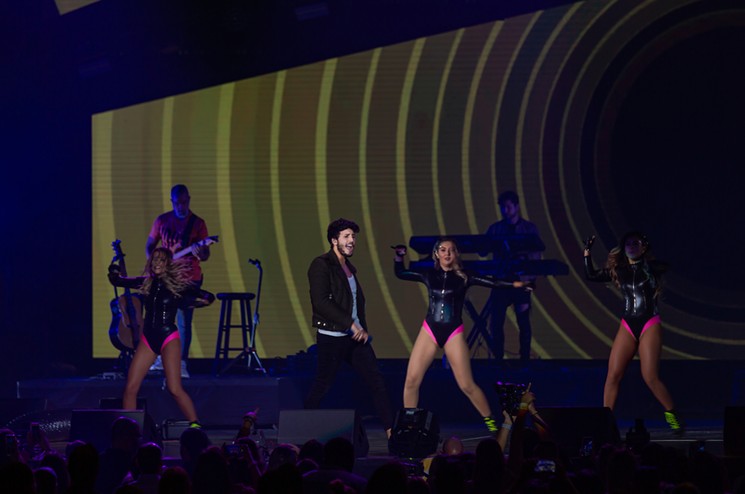 The latter was a welcome glimpse into the last four years of Yatra's life, during which he's consistently played over 200 shows each year. Unfortunately, his exhaustion also showed. Slouching around the stage throughout his set, Yatra brought the vocals at times but he pulled some of the oldest tricks in the book, lifting up his shirt to showcase his chest when lulls arose in the audience. Fans still ate it up, stealing kisses from the young heartthrob whenever he'd venture out into the crowd.

The hardest part of being a touring musician is the pressure to always be on. At any given show, the performance serves as a first impression to hundreds or even thousands of people. Yatra didn't make a strong impression, but he redeemed himself on the ballad "Un Año," which he sang beautifully with acoustic guitar accompaniment. After the performance, he finally got a boost of energy during his performance of "Robarte un Beso," his collaboration with Colombian compatriot Carlos Vives.

Between sets, the crowd remained astoundingly quiet. That's not typical of reggaeton concerts, where the music played between sets is celebrated just as much as the live performances. 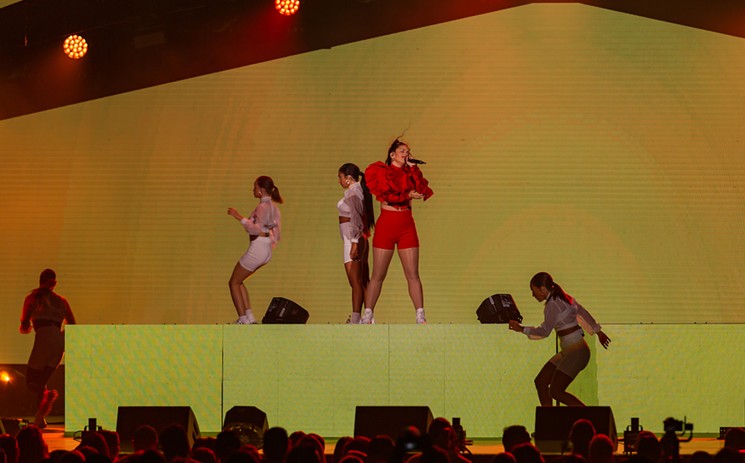 Rosalía. See more photos of ¡Viva Latino! Live here.
Photo by Jorge Martinez Gualdron
Spanish breakout star Rosalía picked things up a bit before superstars Nicky Jam and Bad Bunny took the stage. Her performance was a reminder of just how much harder women have to work to make it big in the music industry. Whereas most performers (save for Bad Bunny) sauntered about the stage as their backup dancers and production pulled most of the weight, Rosalía impressed with her soaring vocals during the haunting "A Ningún Hombre" and danced as hard as her dancers during numbers such as "Aute Cuture." But the crowd took some time to warm up to her. Shows like ¡Viva Latino! are designed for artists to play quick sets of bangers before exiting swiftly. Rosalía, who rose to prominence through her modern take on flamenco, has only recently released a couple of the kinds of songs that work best at multi-performer showcases in arenas. It's telling that despite the critical acclaim for her latest album, El Mal Querer, the crowd reacted most enthusiastically to her J Balvin reggaeton collaboration, "Con Altura."

After another lull in between sets, Nicky Jam took the stage before a crowd that's used to seeing him: He's performed at the Triple A a handful of times over the last year alone. Jam has one of the most recognizable catalogs in Latino urbano music, and he's as adept at headlining two-hour shows as he is at stacking shorter sets with his slew of hits. After running through many of them including "El Amante," "X," and his feature on the "Te Bote" remix, Jam brought Sech back out to share the stage for three songs. His set ran about twice as long as the preceding performances, but it still felt way too soon when he wrapped his set. "I have other colleagues that have to play," said Jam, "but if it were up to me I'd stay here until tomorrow" before crossing himself, kneeling down, and bowing onstage.

By the time headliner Bad Bunny hit the stage around 11:30 p.m., the crowd's drinks had kicked in and they got a second wind. As Spotify-branded bracelets lit up the arena, the Puerto Rican leader of the Latino Gang emerged wearing a vintage Florida Marlins jacket with matching teal shorts, a surgical mask, and light-up shades. His left-field fashion choices were a reminder of how quickly he's gone from Latino urbano's oddball to its leading trendsetter. Throughout his nearly one-hour set, Bunny mostly ran through songs from his surprising and adventurous debut album, X 100pre and Oasis, his collaborative album with J Balvin. Among the songs he played were "Callaíta," the "Te Bote" remix (it's puzzling why he and Jam didn't just play it together), and "Estamos Bien," the latter being among the songs the crowd screamed the loudest.

But as the audience made its way to the exits, pre-Dorian winds were already noticeably picking up, and the conversation turned back to the looming storm almost immediately. At least for a few hours, some of Latin music's biggest and rising stars kept Miami's minds off the worry that has nagged at them throughout the last few days.
KEEP MIAMI NEW TIMES FREE... Since we started Miami New Times, it has been defined as the free, independent voice of Miami, and we'd like to keep it that way. With local media under siege, it's more important than ever for us to rally support behind funding our local journalism. You can help by participating in our "I Support" program, allowing us to keep offering readers access to our incisive coverage of local news, food and culture with no paywalls.
Make a one-time donation today for as little as $1.