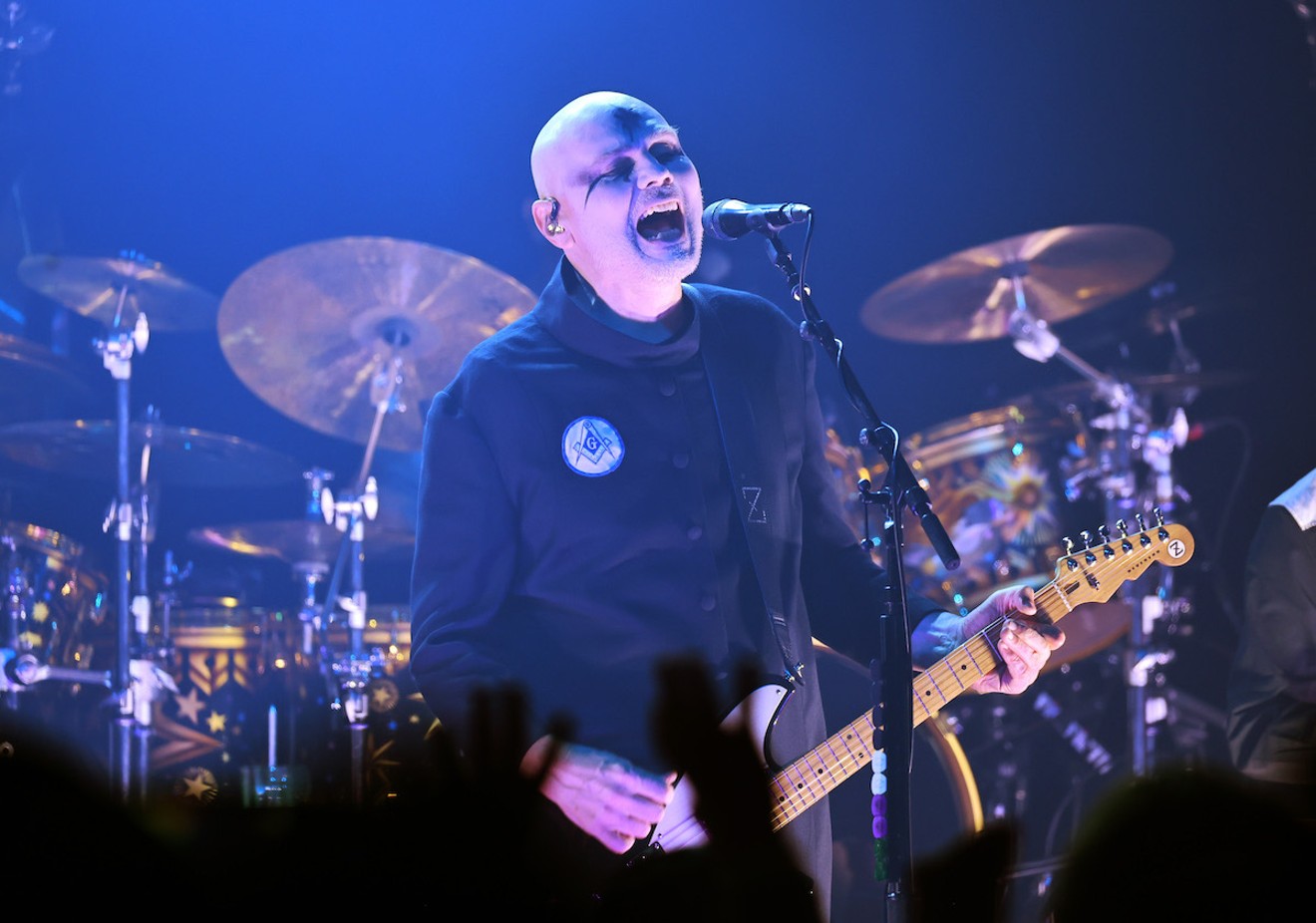 Billy Corgan of the Smashing Pumpkins performing at Irving Plaza in New York City on September 22. Photo by Theo Wargo/Getty Images
Nobody describes music as "alternative" anymore. Because of the diversity proffered by the internet, there's no monolithic music culture to rebel against. But in the late 1980s through the mid '90s, alternative was the catch-all descriptor for any guitar-based music that sounded slightly different. Perhaps because the Smashing Pumpkins and Jane's Addiction fit into that big alternative music tent, they were packaged together for the Spirits on Fire Tour.

Saturday's show at Hard Rock Live was the hottest ticket in town for '90s nostalgists, with seats going as high as $1,000 a pop on the resale market.

The two bands are generational peers, and both broke up only to reunite a few years later. Still, there are marked musical differences between Jane's and the Pumpkins displayed at Saturday's concert.

At 7:30 p.m., the lights darkened and tribal drumming blared, the tempo quickening and quickening before Jane's Addiction came out. This was supposed to be the first tour that featured all four original members, but unfortunately, guitarist Dave Navarro had to skip it as he continued to suffer from long COVID. While Troy Van Leeuwen did a fantastic job of mimicking the gigantic sounds Navarro makes on guitar, he couldn't replicate Navarro's rockstar charisma. That left all the attention on frontman Perry Farrell and the scantily clad trio of burlesque dancers that took the stage.

Luckily, Farrell was up to the task. Though his voice seemed strained at times, he always brought the energy and the enthusiasm of all great rock frontmen. The now 64-year-old singer reminisced about his formative years at North Miami Beach High with the crowd.

"Come on motherfuckers," he told the crowd. "We used to roam these streets on our skateboards. We used to cruise Hollywood. We used to surf at Hollywood."

The band then went into an epic rendition of "Three Day," a sultry ballad at turns both contemplative and slamming. The guitar work and drums during the mid-song instrumental breakdown were hypnotizing, transporting everyone to that happy place only music can take you.

Hard Rock Live fits a lot of people, and out of the corner of my eye, during what I thought was a transcendental concert moment, I noticed the woman in front of me was transfixed on her phone, trying to figure out what wristwatch to purchase online. Ah, well, I guess not everything is for everyone. At least she would have the Smashing Pumpkins to enjoy.

At 9 p.m., the Smashing Pumpkins came out. Singer Billy Corgan, clad in a black robe that had him looking like a druid priest or Star Wars character with an electric guitar strapped on, led the band on a two-hour, 20-song set. He was backed by original guitarist James Iha and drummer Jimmy Chamberlin along with Jeff Schroeder, taking the crowd on a journey through the band's greatest hits.

There were a few hiccups during the Pumpkin's set as Corgan left the stage a few times to deal with technical difficulties, and Iha stalled by rambling about alligators. Corgan put a stop to it when, upon returning, Iha asked, "What do you think about gators?" Corgan responded, "I just want to rock."

Most of the songs were faithful recreations of the studio recordings. There were a few exceptions though. During "Tonight, Tonight," only Iha and Corgan remained onstage for an acoustic rendition, which Corgan introduced by saying, "All the people in the high-priced seats can get up and say they know this song."

However, the highlight of the evening was when the band let loose during psychedelic, guitar-heavy "Silverfuck." Less successful was when the Pumpkins attempted an unfaithful version of Talking Heads' "Once in a Lifetime." Still, for most of the show, the band took the audience back in time to when alternative music was the mainstream, and the idea of browsing on your phone during a fantastic concert was bad sci-fi satire.