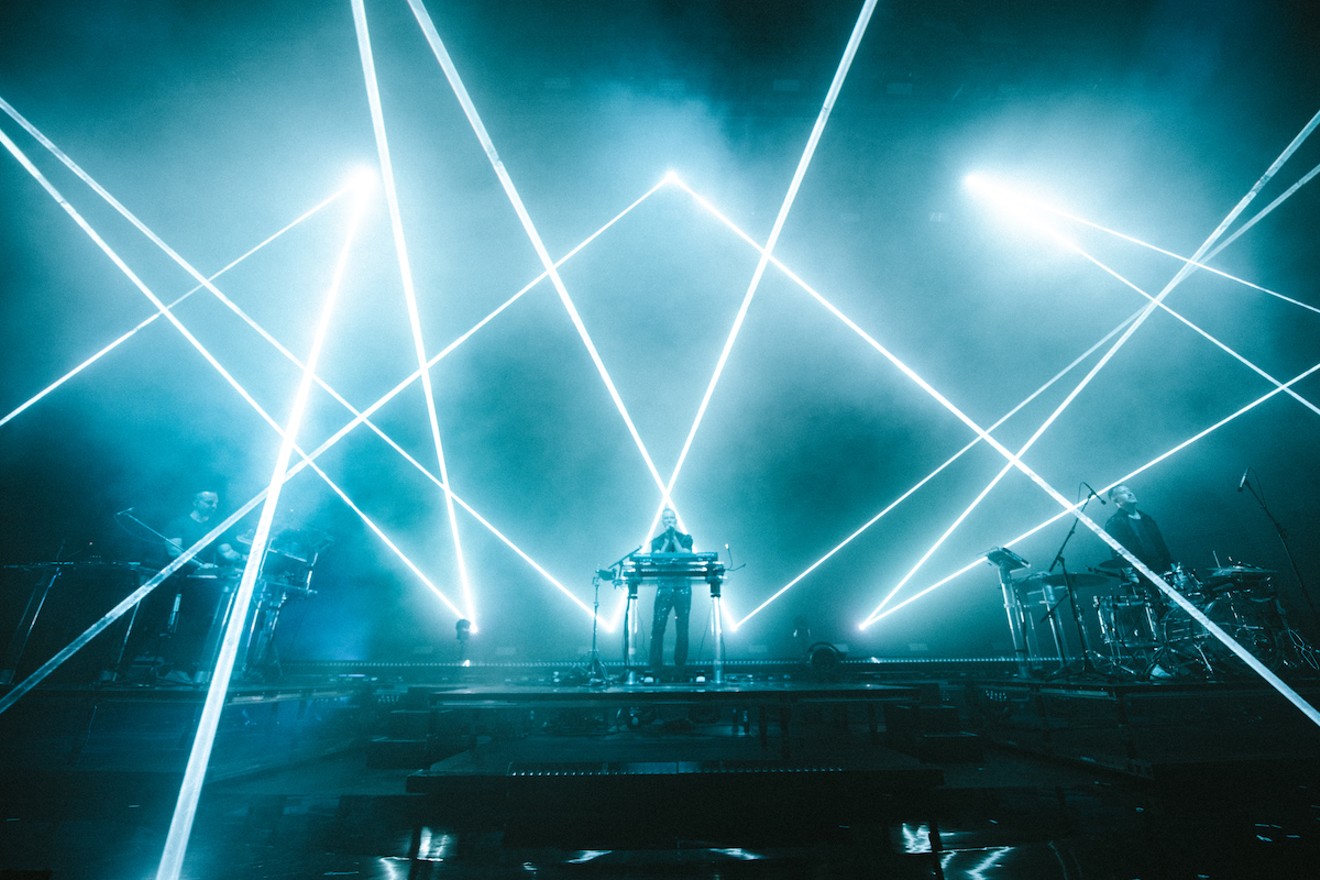 Rufus Du Sol performing at the Hollywood Bowl during the Surrender Tour on October 9, 2022. Photo by Michael Drummond
Rüfüs Du Sol is clearly sticking around, people.

Weeks removed from a randomly spiraling rumor that the trio may disband — which was quickly thwarted — the seemingly ever-rising Australian band closed its North American tour with a sold-out show at FPL Solar Amphitheater at Bayfront Park.

"I remember the first-ever show we did in Miami... it was eight years ago at this place called the Electric Pickle," said drummer James Hunt. "There were maybe 30 people there. And now, for 10,000 of you to be here with us means so much to us."

You could feel the "we've made it" emotion pour from Hunt before the band ripped into "Alive," which earned a Grammy for "Best Dance/Electronic Recording "earlier this year.

And, indeed, Rüfüs Du Sol is very much alive in 2022, recently snagging seven ARIA Awards nominations — hell, they've even got their own hard kombucha brand.

Accolades and endeavors aside, Rüfüs Du Sol's powerful-meets-chill-AF-ness was on full display on a lovely fall evening in Miami on Sunday. It was crisp (OK, it was 78 degrees), and there was even a hay maze adjacent to the grounds to help set the seasonal tone.

And there was fog — lots and lots of manmade fog that poured onto the stage as soon as the trio set foot on it with "You Were Right." Through the evening, the guys — frontman Tyrone Lindqvist, keyboardist Jon George, and Hunt — seldom left their futuristic platforms, each loaded with synths and electronic wizardry galore and anchored by clear plastic legs that illuminated during the evening's nonstop strobe fest.

Quality-wise, the music was on par with the studio recordings, with Lindqvist's signature borderline rasp complementing the vibe. A highlight came in the form of the smash, "On My Knees," as Lindqvist fell to his and belted the infectious hook, "Looks like I'm on my knees again/Feels like the walls are closing in."

Through crowd faves "Underwater," "Sundream," "Next to Me," and "Surrender" (which bears the name of the tour and the latest album), the audience flowed with each beat. It was a waterlike wave of hands and head bobs in many ways, mimicking the adjacent Biscayne Bay when folks are respecting a no-wake zone.

The biggest ripple during the 90-minute set came from a pristinely executed performance of "Innerbloom" that came right before the encore. The crowd — seemingly 50 percent of it sloppily recording all nine minutes of it on their phones — exploded as Lindqvist sang, "I'm giving all that I've got." Surely some phones were damaged in the heat of such excitement.

"I can't think of a better place to end this tour," Lindqvist said glowingly. "It's warm here, and you have been so warm to us. We're blessed to be here."

And, on that note, and a year removed from the band's headlining III Points gig, we're blessed that Rüfüs Du Sol continues to show Miami so much love.
KEEP MIAMI NEW TIMES FREE... Since we started Miami New Times, it has been defined as the free, independent voice of Miami, and we'd like to keep it that way. With local media under siege, it's more important than ever for us to rally support behind funding our local journalism. You can help by participating in our "I Support" program, allowing us to keep offering readers access to our incisive coverage of local news, food and culture with no paywalls.
Make a one-time donation today for as little as $1.