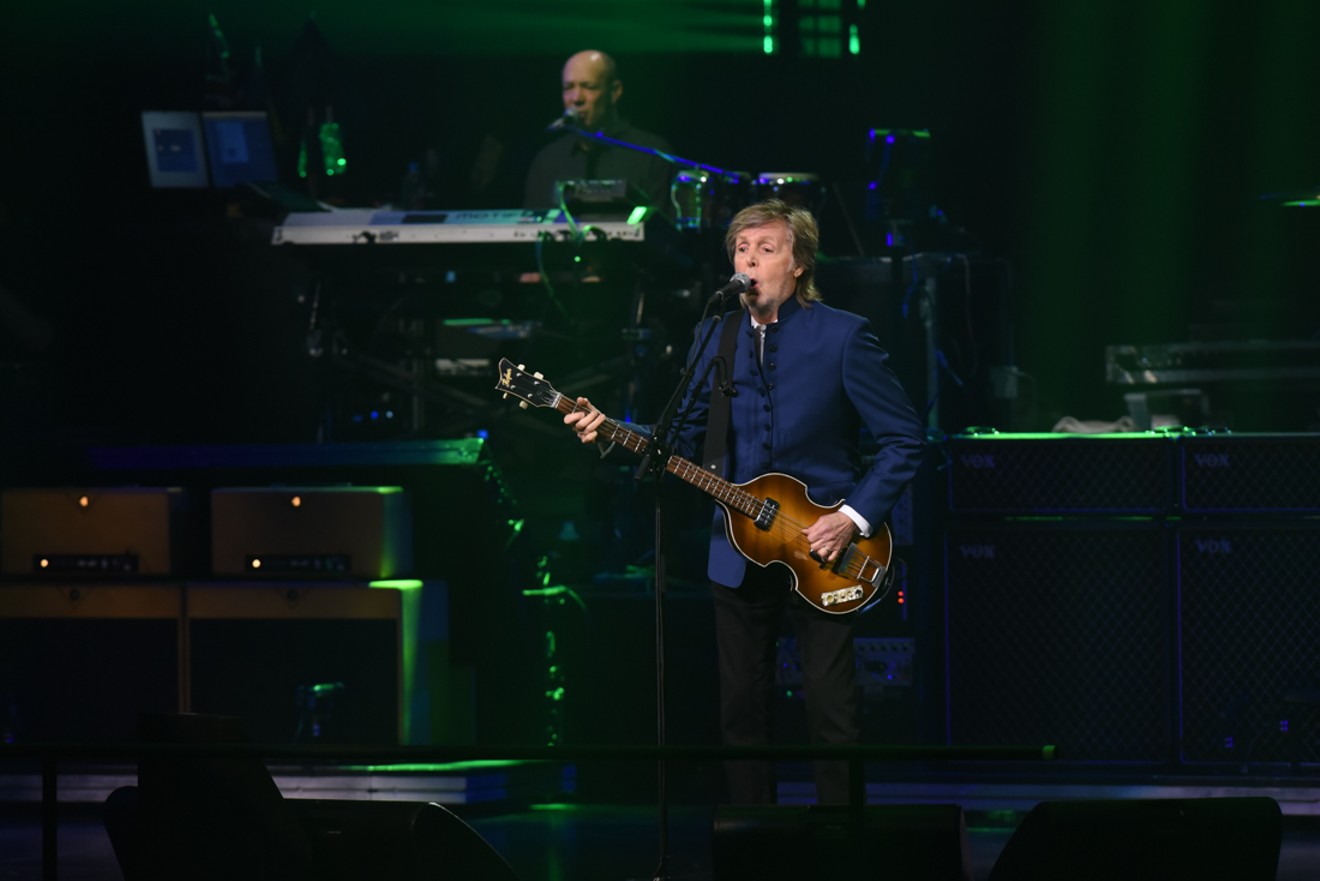 True, Sir James Paul McCartney, who will turn 80 years young on June 18, can't hit the high notes like he used to. Still, his 60-plus year discography, showmanship, and influence didn't stop the nearly 7,000 attendees from enjoying the rock polymath perform at Hard Rock Live in Hollywood last night.

One person in attendance was my father, a self-declared hippie from the '60s, who has never seen McCartney in the flesh despite constantly mentioning he was at the Doors concert at Dinner Key Auditorium when Jim Morrison exposed himself.

His eyebrows rose, and he kicked off a roughly two-and-a-half-hour set, starting with "Can't Buy Me Love" while strumming his signature Hofner 500/1 violin bass abetted by Vox amplifiers stacked like bricks.

My father, whom New Times once interviewed about his experience during Hurricane Irma, was, as they say, in the zone. He sang along to every word, gently clapping his hand to his knee, and felt overall loose — so much so, that I thought I was cramping his style by wearing earplugs and wrinkling my nose at the waft of weed blowing in my direction.

Right before song four, "Got to Get You Into My Life," McCartney took off his navy jacket — naturally making the audience go gaga over the cute Beatle. "That will be the one and only wardrobe change of the night," he quipped. It was only after the band's instrumental cover of Jimi Hendrix's "Foxy Lady" that McCartney began to embellish his performance with dialogue.

Like a parent telling you how they first saw McCartney live, he explained how this cover finds its way into every setlist as a homage to Hendrix, who would often incorporate Beatles songs during his own shows — hilariously out of tune, Sir Paul added. 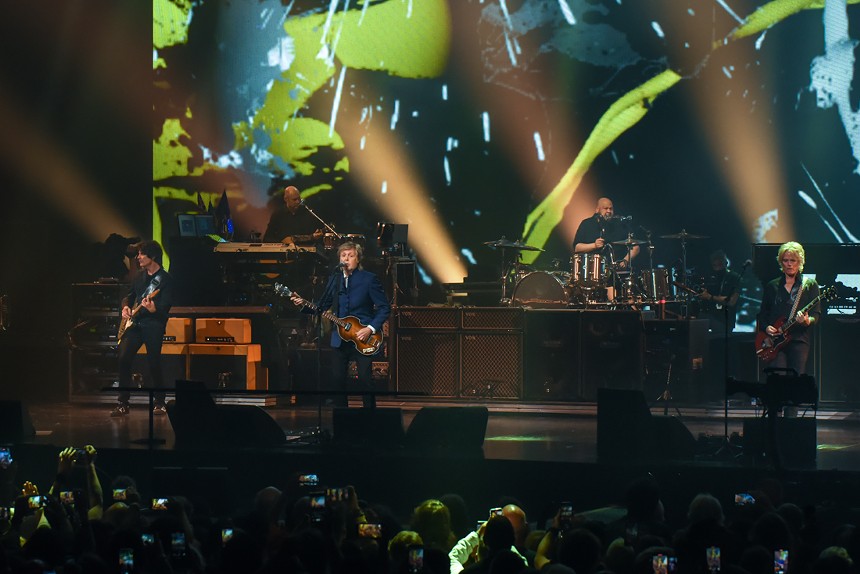 See more photos of Paul McCartney's Hard Rock Live performance here.
Photo by Michele Eve Sandberg
The electric anthems throughout the Beatles and McCartney's solo work are what the crowd came for, leaving the artist no choice but to swap the bass for his customized Gibson Les Paul (left-handed, of course). But McCartney's voice commanded the venue with less.

His somber solo acoustic strumming to "Blackbird" left that voice exposed — naked, as it were. It dazzled in the song's utter simplicity; perhaps to add oomph, McCartney was elevated about 20 feet beneath a massive LED display. He played his 2007 song, "Dance Tonight," with only a mandolin accompaniment before a pounding drum kicked in with the second half.

Capturing the power of hollow-bodies, he covered George Harrison's "Something" with a ukulele and a story of how he'd go over to Harrison's home and play his songs on the instrument. "Let's hear it for George," said McCartney, speaking about his late mate as if the latter were still alive and well.

Watching a near-octogenarian perform classic after classic with a little break in between engenders some measure of anxiety on the audience's part. The idea that someone could squeeze a six-decade-long catalog into a single extended set felt like a time warp.

"We know what you like: If you play old Beatles songs, all the phones go off," McCartney told the crowd. "It's like a galaxy of stars. But if we play new songs, it's like a black hole. But we don't care; we're going to play new stuff."

McCartney made clear that the post-millennium selection wasn't going to be a Spotify-only listening experience. "Fuh You" confirmed his prediction as the phones did seem to dim.

Then, throwing the audience a bone, McCartney comically sighed, "OK," and launched into a chestnut, 1968's "Lady Madonna."

Toward the end of the set, the band went heavy on the showstoppers. McCartney required that the crowd take over singing duties on the infectiously catchy chorus of "Ob-La-Di, Ob-La-Da," and the audience happily chimed in (my seatmate included). Next was "You Never Give Me Your Money" — the song's first live rendition on this tour. 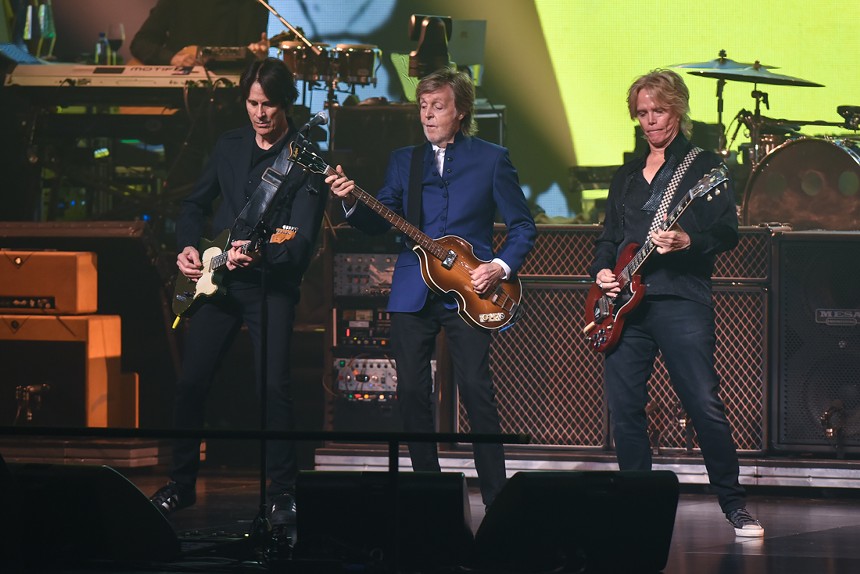 See more photos of Paul McCartney's Hard Rock Live performance here.
Photo by Michele Eve Sandberg
"Get Back," "Band on the Run," "Let It Be," and the pyrotechnic firestorm of "Live and Let Die" — each had its moment in the sun. Perhaps a bit on the nose, McCartney closed with "Hey Jude" and directed the audience to sing the chorus, letting the men take a crack at it first, followed by the women, then all together as the extended "Naa na na na, na na na, na na na na, hey Jude" rang through the venue.

The band took the bow, but the wool was over no one's eyes when everyone came back on stage, waving the Union Jack, Ukrainian, American, and Pride flags, and even the Florida state flag.

A four-song encore ensued: "I've Got a Feeling," "Birthday," "Helter Skelter," and the seamless medley of "Golden Slumbers," "Carry That Weight," and, true to the show's opening notes, "The End." Finally, the band bowed once more, and McCartney said, "See you next time."

Hearing these songs ad nauseam every day of my life via my father left me jaded, but any trace of negative vibes dissipated amid the 30-plus-song marathon.

McCartney injected loads of humor, visuals, lasers, and a genuine intention to put on a good show, all of which combined to outweigh the years of forced listens. It was more than enough to carry my father and me through the concert together.

When it was over at we stood to go, my dad didn't say it had been "groovy" or "far out." He just said the show was good and hummed that same old tune.

Encore:
- "I've Got a Feeling"
- "Birthday"
- "Helter Skelter"
- "Golden Slumbers," "Carry That Weight," "The End."
KEEP MIAMI NEW TIMES FREE... Since we started Miami New Times, it has been defined as the free, independent voice of Miami, and we'd like to keep it that way. With local media under siege, it's more important than ever for us to rally support behind funding our local journalism. You can help by participating in our "I Support" program, allowing us to keep offering readers access to our incisive coverage of local news, food and culture with no paywalls.
Make a one-time donation today for as little as $1.