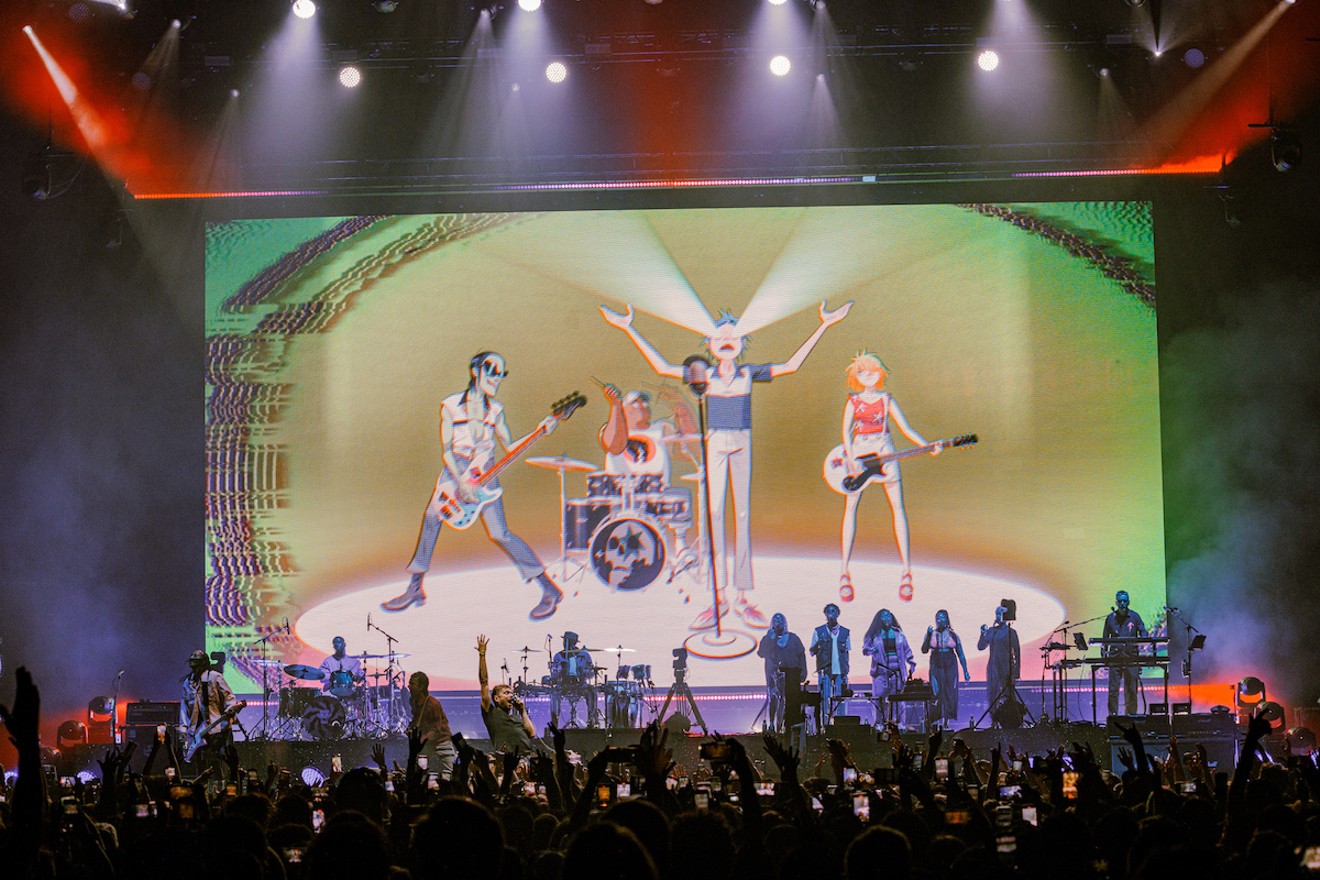 Gorillaz performing at the Forum in Los Angeles on September 23, 2022. Photo by Blair Brown
It only took 24 years since singer Damon Albarn and cartoonist Jamie Hewlett first decided to take a break from their jobs as frontman of the rock band Blur and drawing Tank Girl comic books, respectively, for their virtual band project Gorillaz to finally play a non-festival show in South Florida.

For the thousands in attendance at FTX Arena on Sunday night, Gorillaz was well worth the wait. Over the course of two hours and a few dozen songs, the band managed to mix cartoons, hip-hop, world music rhythms, piano ballads, and guest stars galore into a joyous, unforgettable concert.

When Gorillaz started off a couple of decades ago, the idea was to serve as commentary on the superficiality of MTV. The cartoon figures Hewlett drew were to be presented as the band, and the actual human musicians who made the music were to remain anonymous. During Gorillaz's first tour in 2002, Albarn and Hewlett went so far as to have the musicians hidden behind a screen upon which cartoons played.

As cool and fun-looking as the animated band might be, for the 2022 tour, people came out to see the musicians who make the extraordinary music. Starting at 9 p.m., the band took center stage. There were three drummers, five backing singers, a keyboardist, a guitarist, a bassist, and, finally, Damon Albarn. In a Canadian tuxedo of a jean jacket and pants, Albarn raised his arms to hype the crowd on the final night of the tour as they played a set peppered with songs from all eight Gorillaz albums.

The audience still saw flashes of 2-D, Murdoc Niccals, Noodle, and Russel Hobbs having various adventures on the giant screen, including rollerblading past the actor Jack Black and shooting down fighter planes, but if you stared too long, then you might have missed the crowd-work the band was doing. The stage dimensions were merely a suggestion for Albarn, who constantly strolled down into the masses as though he was on the ballot to be the next governor of Florida. He was shaking hands, hugging, and even signing autographs as he sang, accepting and putting on articles of clothing like pink sombreros and red shades as fans handed them to him.

One of the fun things about a Gorillaz record is you never knew who might show up to collaborate, be it a legend like Bobby Womack or Elton John or a relative newcomer like Bad Bunny or Tame Impala. Early in the show, guest singers for the song "Empire Ants" and "She's My Collar" were shown on screen but were not on stage. But then, one by one, a slew of actual guests came out. First, rapper Booty Brown came out for his verses in "Dirty Harry," then toward the end of the main set, Albarn expressed gratitude to the fans. "This has been an amazing tour. We feel really loved. This is the originator of the whole thing" — and out walked Del the Funky Homosapien to spit his ferocious verses of Gorillaz's breakthrough single, "Clint Eastwood."

During the encore, the members of De La Soul marched out. Posdnuos asked the crowd to lift their arms and make a variety of pledges ending with the promise to feel good, which segued into the intro of Gorillaz's biggest hit, "Feel Good Inc."

It was a fitting song for a night all about feeling good for the diverse crowd of adults who grew up with the band and kids born way after their arrival. For a project born out of cynicism, Gorillaz has somehow ended up as a source of positivity decades later. Proving that just as cartoons like Tony the Tiger once got kids hooked on sugary cereal, Gorillaz has served as a gateway for turning two generations onto great, sweet music.

Encore:
- "New Gold" (with Bootie Brown)
- "Rock the House" (with Del the Funky Homosapien)
- "Feel Good Inc." (with De La Soul)
- "Don't Get Lost in Heaven"
- "Demon Days"
KEEP MIAMI NEW TIMES FREE... Since we started Miami New Times, it has been defined as the free, independent voice of Miami, and we'd like to keep it that way. With local media under siege, it's more important than ever for us to rally support behind funding our local journalism. You can help by participating in our "I Support" program, allowing us to keep offering readers access to our incisive coverage of local news, food and culture with no paywalls.
Make a one-time donation today for as little as $1.