Depeche Mode Brought Sex and Cigarettes to the AAA 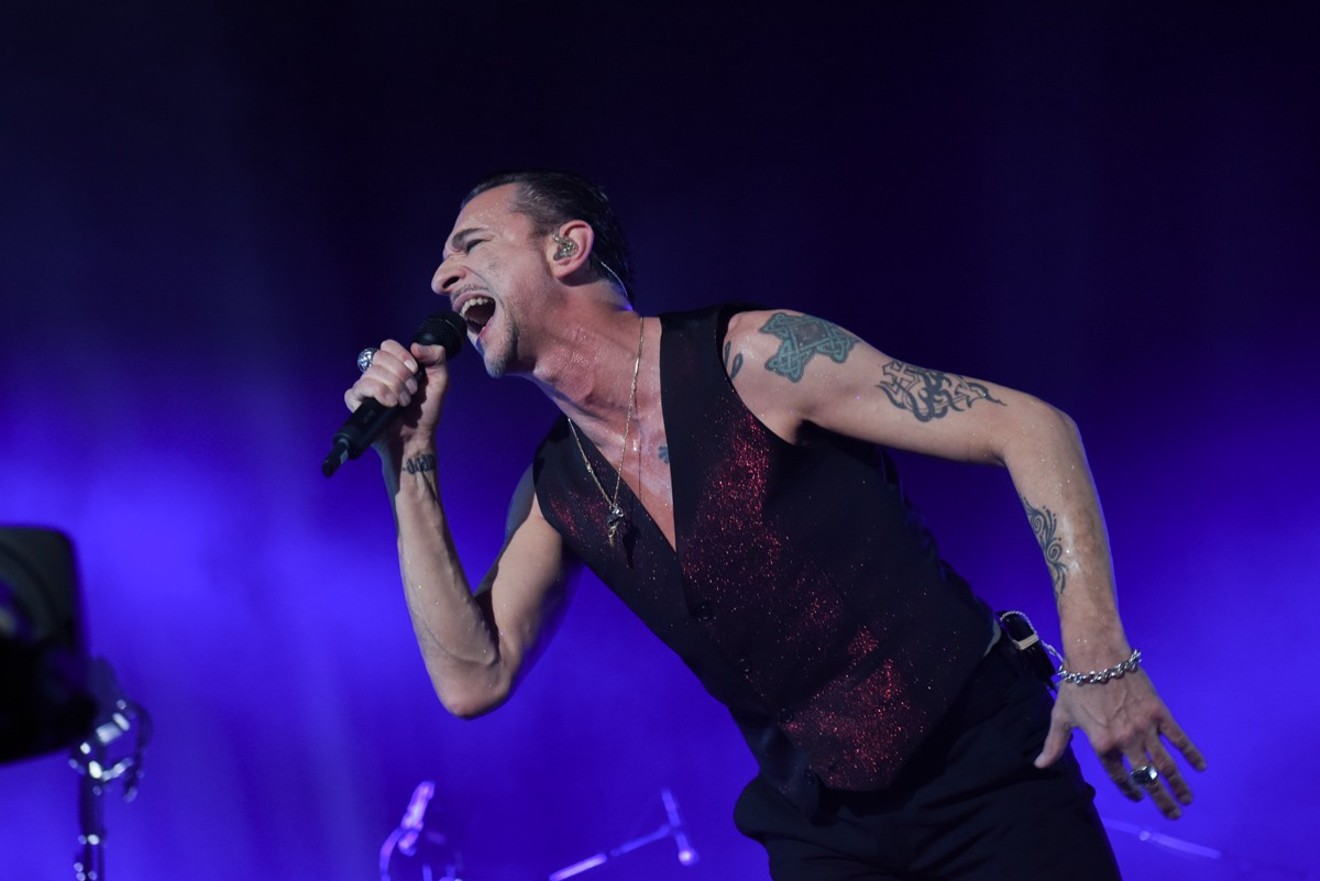 See more photos from Depeche Mode's show at the American Airlines Arena here. Photo by Christina Mendenhall
For one night, the American Airlines Arena reeked of cigarettes. Walking to the arena from Biscayne Boulevard, concertgoers could see handlers milling about the balcony like eyeliner-clad gargoyles spilling smoke and ashes from their open mouths. The occasion for such a morbid gathering — Depeche Mode’s Miami stop on its Global Spirit tour — was a throwback in more ways than one. Beyond the staggering reality that Depeche Mode is now a legacy act, the halls of AAA were littered with black T-shirts (seriously, it was near-unison) emblazoned with beloved acts of years past: the Nine Inch Nails logo, the omnipresent cover of Unknown Pleasures, and some reference to the Smiths and/or Morrissey were particularly popular. There was also, of course, the unmistakable hint of burnt processed tobacco long ago banished from indoor venues.

Although the air was thick with nostalgia, Depeche Mode itself was as urgent as ever. Performing a career-spanning set with enough selections across the band's discography to satiate all but the pickiest of fans, Dave Gahan, Martin Gore, and crew put on a show for the ages. Running through a monstrous 22-song set over the course of two and a half hours, Depeche Mode reminded Miami where the name of the city’s premier electronic music festival comes from and why. Photo by Christina Mendenhall
Losing little of his sex appeal in the intervening 36 years between Speak & Spell and last night, Gahan brazenly sashayed, stomped, and strutted his slender frame for the duration of the evening, owning tracks like Violator standout "World in My Eyes" as well as introducing some much-needed sleaze and relative subtlety to the AAA.

When songs weren’t accompanied by visuals courtesy of longtime collaborator Anton Corbijn, the band often found itself bathed in bold primary colors or overwhelming darkness, with a few seizure-inducing lights tossed in for good measure. Requisite periods of calm were overseen by touring keyboardist Peter Gordeno and principal songwriter/guitarist Gore, who broke up the show’s more propulsive moments through softer selections from the Depeche Mode catalog, including Ultra cut “Home” and love ballad “Somebody.”

But when the hits came, they came hard. Building anticipation with an extended intro and eventually culminating with a lengthy audience a cappella, “Everything Counts” was among several show-stoppers sprinkled throughout the evening, along with initial set closers “Enjoy the Silence” and “Never Let Me Down Again,” which saw a gleeful Gahan unload a T-shirt cannon into the audience. Photo by Christina Mendenhall
Given Depeche Mode’s considerable influence on subsequent artists, it was refreshing to watch the bandmates pay tribute to their own heroes. In addition to dropping the hook from Grandmaster Flash’s “The Message” at the end of “Barrel of a Gun,” the group also played a sparsely arranged cover of “Heroes” by the late David Bowie during the encore. But the most riveting moment of the night was reserved for the band’s own material, as the guys closed with a knockout rendition of “Personal Jesus.”

Three and a half decades into their career, the members of Depeche Mode have perfected the stadium set. As one of the few synthpop bands that can sell out an arena, the group's perennial must-see status is a testament to the timelessness of its music and knack for memorable performances.