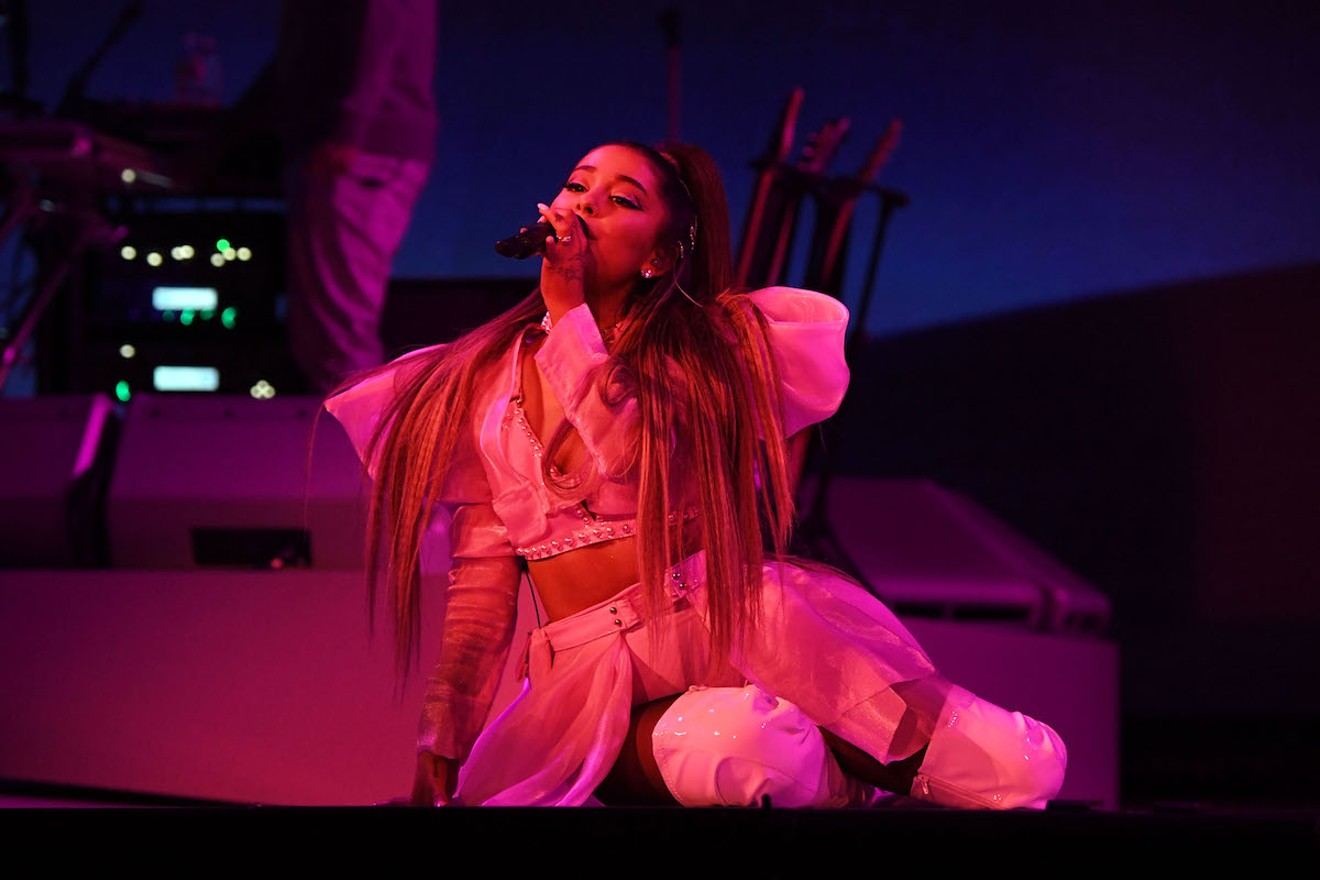 Ariana Grande performing at the opening night of her Sweetener Tour in Albany, New York. Photo by Kevin Mazur / Getty Images
The most remarkable thing about Ariana Grande's Friday night concert at the American Airlines Arena  — her first of two back-to-back shows in Miami this weekend — was that it happened at all. Grande returned to the stage last night just three days after canceling the Tampa and Orlando stops on her Sweetener World Tour due to a severe allergic reaction. But beyond that, Grande's ability to take the stage at arenas night after night is a feat in itself; not just because it's a level of success very few musicians attain, but because the powerhouse singer must defy mental health demons and PTSD every single time she rises from below the stage.

Just ten days ago, the world observed the two year anniversary of the Manchester Arena bombing, in which 22 people died and hundreds were injured as they left Grande's UK concert. The singer has been open with fans about the anxiety and post-traumatic symptoms she struggles with daily, and stepping into venues that are not very different from the one where the tragedy took place has to be incredibly triggering.

The reminders are there from the moment one approaches the venue. Bags and purses were banned from entering the AAA, with only clear bags allowed. Fans who didn't get the memo lined up to check in their bags at the southern end of the venue, while others rushed back to their cars to stash their purses in glove compartments.

Considering the time it takes to plan every detail of a world tour — from set design to costuming to travel logistics and merchandising — it stands to reason that Grande didn't take very much time off after the tragedy. Factor in that her former, longtime boyfriend Mac Miller died of an overdose a little over a year after Manchester, that she broke off a very public engagement just a month after that, and that she managed to record and release two full-length albums in the midst of all it, and you've got to admit that the 25-year-old singer is downright admirable.

That kind of resilience is at the heart of the messaging of Grande's Sweetener show and the albums that precede it. For the most part, the aesthetic is bold and bright, from hot pink hues and shimmering red-orange sequins reflected in her costuming to the massive spherical sun and moon structures that anchor the show's set design. But Grande also allows for moments of limited spectacle in which the heaviness underlying these songs becomes more pronounced.

Ironically, those are the moments when Grande's talents shine brightest. During the high-energy first act, during which she sang "God is a Woman," "Bad Idea," and the *NSYNC-sampling "Break Up with Your Girlfriend, I'm Bored," Grande struggled to stand out amidst a sea of backup dancers, props, and ham-fisted dance routines. Grande became a superstar because of her seldom-matched vocal prowess, but pop stars are expected to do it all these days. And though her dance skills have greatly improved since the release of her studio debut, Yours Truly, Grande is still learning to command a busy arena stage.

Ariana Grande performing at the opening night of her Sweetener Tour in Albany, New York.
Photo by Kevin Mazur / Getty Images
She could have used some of those resources during the transitions between acts, which lacked luster and slowed the pace of the show. Mesmerizing an audience during a costume change is one of the most thrilling deceits of arena pop shows, but Grande is still learning this, too. Most interludes appeared to be thrown together at the last minute when most of her contemporaries are putting cinematic short films on jumbo screens during transitions.

But it seems almost trivial to nitpick technical aspects of Grande's show when its power is in its messaging. Grande's audience was relatively diverse in terms of gender, and though fans of all ages could be seen at the arena, the audience skewed heavily towards Gen Z. The show addressed this generation specifically before Grande even hit the stage. Before the show, videos showed young people holding up picket signs inspired by the singer's songs at women's marches and the March for Our Lives. The video urged the young people in the room — dubbed the #ThankUNextGen — to contact their representatives in Congress, though it did not hone in on any one particular issue.

Gen Z is a generation that reports higher levels of mental health issues than any other group, and Ariana Grande has crafted a tour that reminds them to take care of themselves, even as she heals through it too.

During "Get Well Soon," a Sweetener track in which Grande sings about disassociation, anxiety, and seeking help for mental ailments, the lights dimmed almost completely, save for a backdrop of moving stars and the moon-like structure in the middle of the arena. Grande could be seen in silhouette only, perhaps a creative way of obscuring that she often breaks down when she sings these songs live.

But the most poignant moment came when Grande sang "Needy," off of Thank U Next. Laying on the floor, dimly lit in lavender hues, Grande once again connected most effectively when she left the theatrics by the wayside. As the song progressed, fans slowly lit up the arena with cellphone flashlights. By the time she sang "Tell me how good it feels to be needed," the fans' lighting overpowered that of the venue. At that moment, the audience manifested an affirmation that Grande co-wrote at the depths of her depression two years ago: "The light is coming to give back everything the darkness stole."

Encore:
- "Thank U, Next"
KEEP MIAMI NEW TIMES FREE... Since we started Miami New Times, it has been defined as the free, independent voice of Miami, and we'd like to keep it that way. With local media under siege, it's more important than ever for us to rally support behind funding our local journalism. You can help by participating in our "I Support" program, allowing us to keep offering readers access to our incisive coverage of local news, food and culture with no paywalls.
Make a one-time donation today for as little as $1.