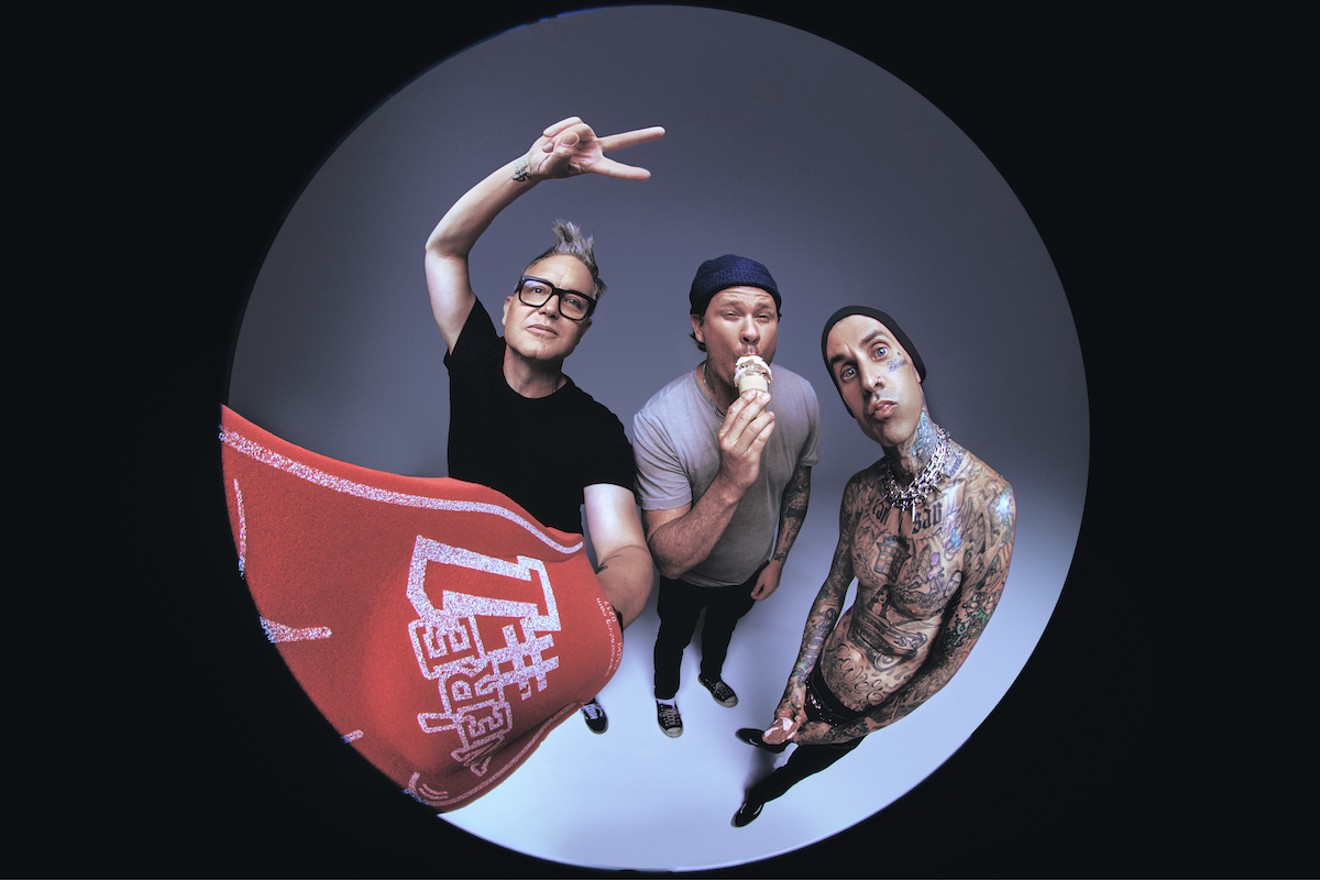 Blink-182 Photo by Jack Bridgland
Veteran pop-punk trio Blink-182 will embark on an extensive world tour starting early next year, including a stop at FLA Live Arena in Sunrise on July 11, 2023.

The band’s world tour announcement on Tuesday was highlighted by the fact that drummer Travis Barker and bassist Mark Hoppus will reunite with longtime guitarist and cofounder Tom DeLonge, who departed Blink-182 in 2015 to pursue other endeavors. In the eight years since the shuffle, Blink-182 has toured and recorded two full-length studio albums with Alkaline Trio singer and guitarist Matt Skiba.

The lengthy reunion tour kicks off in March in Mexico and will continue well into the spring, summer, and fall months, with performances across four continents before coming to an end in early 2024 following a run of dates in Australia and New Zealand. The lengthy run notably includes the band’s first-ever performances in Latin America.

For local fans, the show at FLA Live Arena will mark Blink-182’s first concert in the region in nearly four years. The band's last trip through South Florida was in July 2019 when the band — sans DeLonge — played a show at iThink Financial Amphitheatre (then known as Coral Sky Amphitheatre) in West Palm Beach during the band's Enema of the State 20th Anniversary Tour with rapper Lil Wayne.

DeLonge’s other band, Angels & Airwaves, returned to the road to play a pair of shows in Florida last October in Orlando and St. Petersburg.
The Barker/Hoppus/DeLonge lineup came together for the first time back in the late 1990s when alt-rock acts still dominated the pop music charts. The trio gained international fame and helped lift the pop-punk genre into the mainstream thanks to a string of hit studio albums, including 1999’s Enema of the State, 2001’s Take Off Your Pants and Jacket, and 2003’s self-titled record.

To add to Tuesday’s excitement, the band’s announcement also included news of a forthcoming single entitled "Edging," due out October 14. The track marks the first new original recording featuring the three primary members in more than a decade. In a post shared to his Instagram page on Tuesday, DeLonge wrote, “What if I was to tell you we just made the best album of our career.”

Tuesday’s celebratory news also follows what was a challenging year for Hoppus on a personal level, as the bassist was diagnosed with cancer in early 2021 but has since completed treatment successfully.

This isn’t the first time the band’s Enema of the State-era lineup has reunited for a successful tour. DeLonge, Barker, and Hoppus parted ways for an indefinite hiatus in 2005 and reunited three years later in 2008.

Blink-182. With Turnstile. 7:30 p.m. Tuesday, July 11, 2023, at FLA Live Arena, 1 Panther Pkwy., Sunrise; 954-835-7000; flalivearena.com. Tickets cost $24.75 to $144.75 via ticketmaster.com.
KEEP MIAMI NEW TIMES FREE... Since we started Miami New Times, it has been defined as the free, independent voice of Miami, and we'd like to keep it that way. With local media under siege, it's more important than ever for us to rally support behind funding our local journalism. You can help by participating in our "I Support" program, allowing us to keep offering readers access to our incisive coverage of local news, food and culture with no paywalls.
Make a one-time donation today for as little as $1.