First, the good news: Lil Wayne has not quit the tour despite throwing a temper tantrum during a Virginia stop July 11. Even better news: Both Lil Wayne and Blink-182 seem to have found their rhythm and sense of excitement midway through the tour.

As has been standard operating procedure thus far, Lil Wayne performed first. The sizzurp-swiggin’ MC, sporting blond dreadlocks and abuelita’s bathrobe, was backed by a full band cranked so stupid-loud that audio techs made sure the crowd couldn’t hear shit.

Thankfully, plenty of fans in the audience knew the songs and seemed barely concerned with sound quality. Lil Wayne followers don't go to his shows for the clarity but for the energy, the vibe, and the violent thump in the chest. It’s like a tailgate: You don’t go for the cuisine; you go to get blasted on cheap beer with your friends. South Florida operated under the same principle last night: getting up for the bangers and rocking out to the old-school jams (and some new ones) that absolutely slapped. 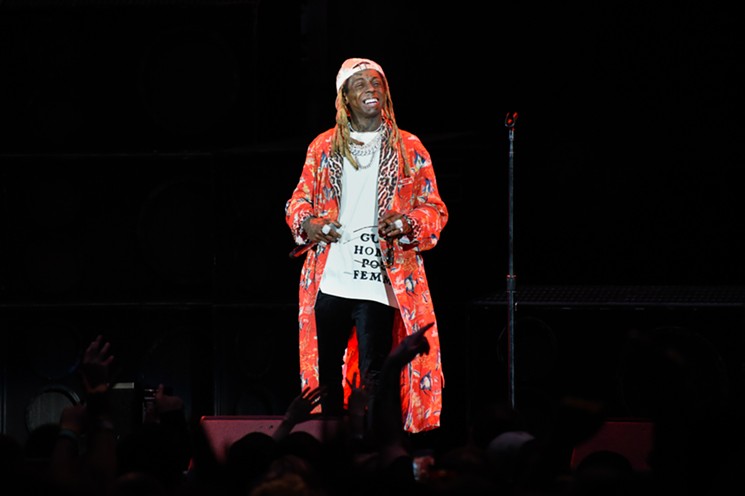 Lil Wayne. See more photos from Blink-182 and Lil Wayne here.
Photo by Michele Eve Sandberg
Weezy’s set improved dramatically when it was just him and a beat that went hard as fuck. That's all he really needs: Let him spit and the beat-break and we can all go home happy.

The nearly 45-minute set was a hip-hop medley covering highlights of Wayne’s career, from “6 Foot 7 Foot” to “Lollipop” to “A Milli.” The rapper also threw in features he’s done for French Montana (“Pop That”) and Chance the Rapper (“No Problem”). He even covered a verse from the ubiquitous country-rap abomination “Old Town Road.”

Though Lil Wayne’s tattooed face now resembles a hippie’s car covered in cartoonish bumper stickers, his voice remains that of a hellbent rap robot constructed for one purpose: to conquer the planet through the freshest of flows. 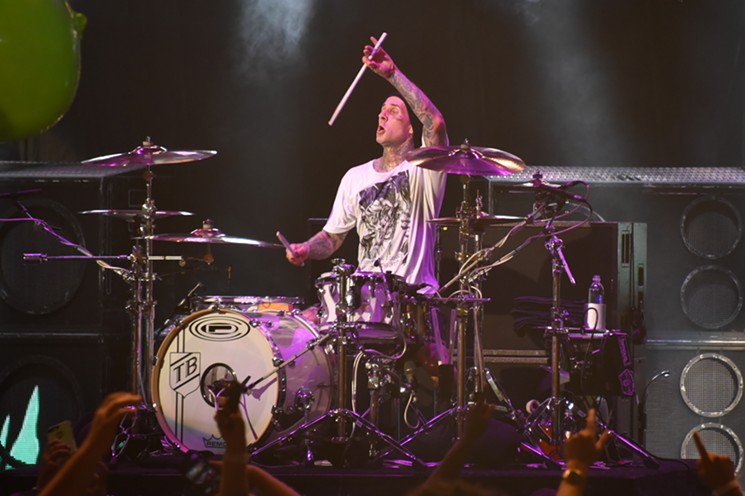 The San Diego rockers proceeded to play their breakthrough third LP, Enema of the State, in its entirety, illustrating throughout the performance that there is still plenty of that man-child, immature punk energy left in the band's tank. The album was released 20 years ago, establishing the group as a mainstay of the pop-punk genre.

Could the members of Blink-182 (or at least its current incarnation with Hoppus, Travis Barker, and Alkaline Trio’s Matt Skiba, who replaced original member Tom DeLonge) have envisioned they'd still be pounding out the same high-school anthems two decades later? Maybe it doesn't matter, because the crowd ate it up.

For “All the Small Things,” they pulled a Green Day and brought up a fan, Robbie from Boca Raton. The supremely confident man crushed it on the guitar and occasional vocals, and even executed a few professional David Lee Roth jumps before being ushered off the stage. Afterward, long confetti streamers got stuck in the rafters the way some fans — maybe Robbie — are happily stuck in the late-'90s/early-'00s pop-punk heyday.

After their musical stroll down memory lane, Hoppus and Skiba treated the cheap seats to a two-song acoustic set, followed by a Barker drum solo that was equal parts Tommy Lee and industrial EDM.

Mark Hoppus of Blink-182. See more photos from Blink-182 and Lil Wayne here.
Photo by Michele Eve Sandberg
Despite having a new album on the horizon — the creatively titled Nine — Blink spared the audience the unknown-songs gambit most acts force upon crowds paying exorbitant ticket prices. The band played only one new track, the aptly titled “Blame It on My Youth,” before closing out the show with their crowning achievement, “Dammit.”

One song the venerable punk rockers didn’t play was “Darkside,” their latest single. Mere hours after the West Palm show, the track premiered on the band’s official website and was made available across most streaming platforms and as a free download for fans pre-ordering the forthcoming record. It’s a pretty solid track and perhaps the most Alkaline Trio-sounding song of the Matt Skiba era, reminiscent of Crimson and Agony & Irony.

By the end of the night, it was easy to see why Weezy was pissed not that long ago. The crowd was mostly Blink-182 fans buying rock-show tickets and settling for a Lil Wayne set as part of the package. On this tour, he’s an afterthought — the icing on the punk-pop vanilla cake.

Perhaps that’s a bit unfair, but here’s the truth: This might be the oddest cross-cultural teamup since Paul McCartney and Stevie Wonder brought us the saccharine, cringe-inducing “Ebony and Ivory.” Unlike that collaboration, Blink-182 and Lil Wayne's show works for mindlessly fun reasons, leaving ears ringing and bodies rocking to the soundtrack of their youth.
KEEP MIAMI NEW TIMES FREE... Since we started Miami New Times, it has been defined as the free, independent voice of Miami, and we'd like to keep it that way. With local media under siege, it's more important than ever for us to rally support behind funding our local journalism. You can help by participating in our "I Support" program, allowing us to keep offering readers access to our incisive coverage of local news, food and culture with no paywalls.
Make a one-time donation today for as little as $1.