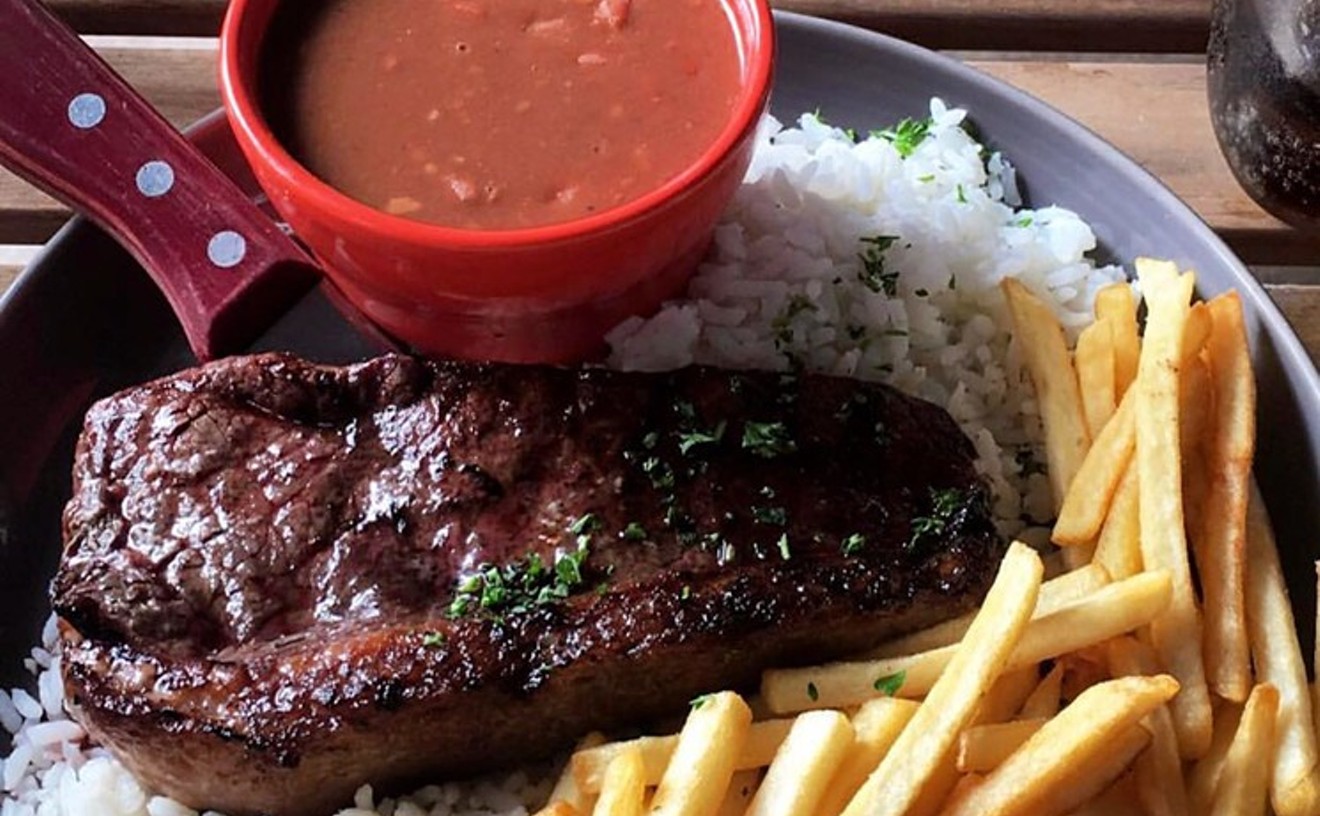 A Brazilian joint at the Village Restaurant & Shops in downtown, Bar da Vila is a great place to feast on richly flavored classics like picanha skewers and feijoada. But what separates this spot from other Brazilian restaurants in town is its lively and welcoming ambiance. It's an ideal spot to grab a drink, catch up with friends, and listen to live music on weekends. Need further inducement? The prices are as friendly as the atmosphere. Try the stroganoff, prepared with your choice of meat in a tomato cream; or marinated sea bass with a nut crust and açaí reduction; or the picanha burger served inside cheese bread with bacon, mozzarella cheese, and caramelized onions. Oh, and a caipirinha to drink. Always order a caipirinha.

NW Second Avenue in Wynwood is known for its eye-popping murals, selfie-obsessed pedestrians, and all-around chaos, but some of the juiciest and most flavorful jerk chicken and oxtail in the city can be found in an inconspicuous eatery just a block north of the hustle-bustle, where a headless mannequin painted in the colors and pattern of the Jamaican flag marks the entrance. Ian Curtis, AKA Chef Slim, runs the kitchen, while his wife, Nadine Patrice, sees to the front of the house. The turquoise walls are dotted with canvases depicting Bob Marley and George Floyd, along with uplifting messages, imbuing the space with a warm, laidback vibe not unlike that of a friend's dining room. Other Caribbean classics are served here, including curry goat roti, fish cakes, Jamaican patties, and conch fritters. Dinner arrives in heaping portions, alongside rice and beans, and sweet plantains. Just don't drop in on a Monday. Every chef is entitled to a day off.

Restaurateurs Javier Ramirez and Leo Monterrey first imagined the space on NW 29th Street as a Thai kitchen, but ultimately decided to go with classic Cantonese fare inside a Miami-fied take on a Chinese restaurant. With its brightly painted exterior and salsa-infused playlist, Palmar — Spanish for "palm grove" — indeed reflects the Magic City's tropical elements. But don't be fooled: This spot is Chinese cuisine at its best. An early à la carte menu offered a number of modern takes on classic dishes — immediately identifiable as Chinese, but with ingredients that fell outside the traditional cuisine. A few such dishes can still be found on the well-composed menu overseen by executive chef Pedro Lara. The lineup moves from dim sum, rice, and noodles to heartier entrees such as Szechuan beef in a velvety sweet and tangy sauce. But dumplings — handmade and stuffed with everything from eggplant and lamb to scallops and pork — steal the show at Palmar, along with savory crab and veggie versions of Filipino-style lumpia. The fried rice is also notable, arriving in mountainous heaps flecked with confetti-like nibs of cooked egg and diced scallions. Peking-style roasted duck, served tableside, is, as the menu notes, an experience. 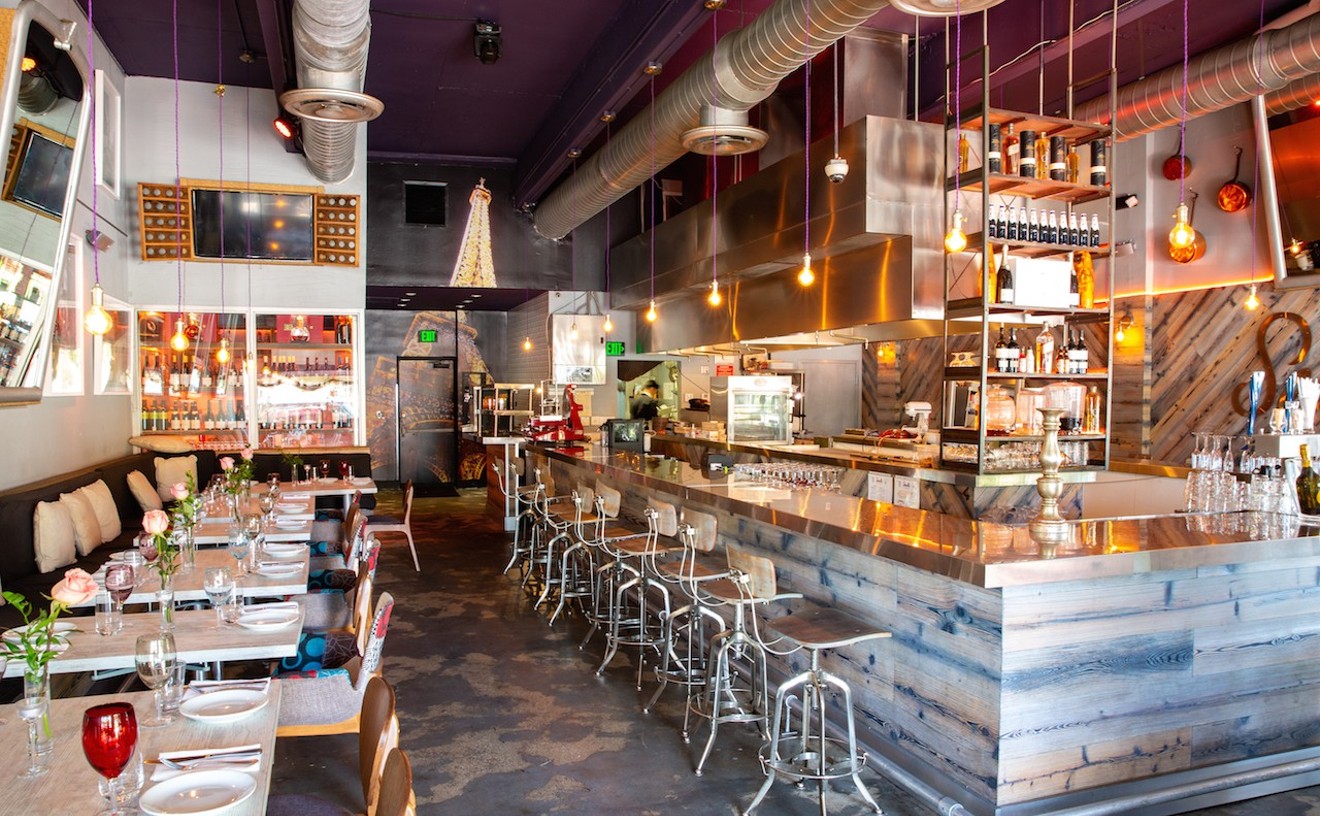 At Semilla, fresh-from-the-oven baguettes are served with terrine de foie gras and Granny Smith apple jelly just to get things going. Frederic Joulin and his wife Laetitia have been running this French comfort-food restaurant since 2013 and host one of the best South Beach happy hours. The bistro-style cooking is carried out in an open kitchen that allows guests to see what's happening behind the line as classic, delectable dishes — moules marinière, boeuf bourguignon, and New York steak au poivre come together. It's the kind of place one goes for dinner but stays for the evening, enjoying the sounds of lounge music and sipping the wine. 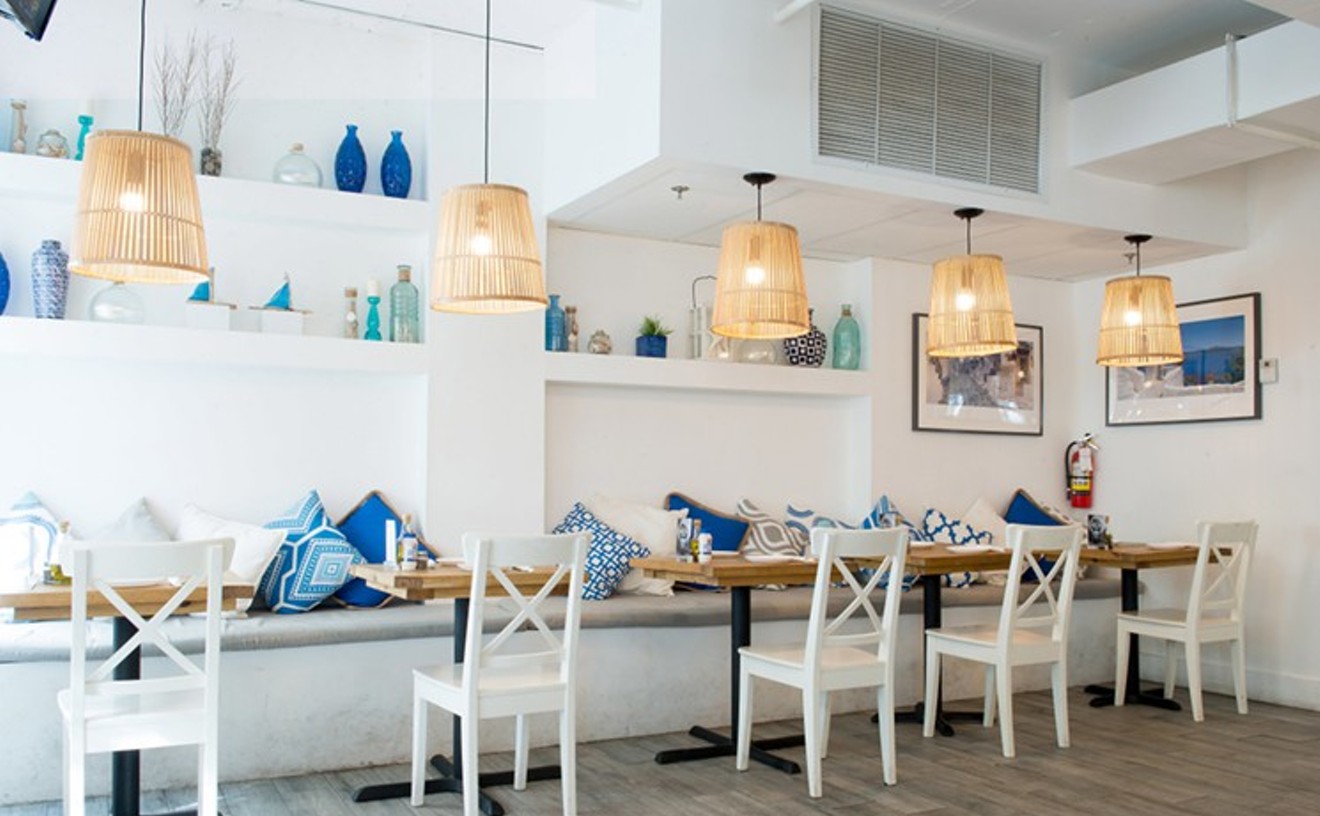 Tucked in the center of downtown Miami, Meraki beckons with its warm ambiance and virtually hidden location away from the fray. Diners aren't here for frills or fuss. They come for the homey feel of the whitewashed space, dotted with flowers, lamps, and blue and gold accents, a vibe that's just the ticket for dates, groups of friends, or a girls' night out. Tried-and-true dishes of kebabs, seafood, and moussaka share the menu with specials and family platters. A list of Greek wines contains the perfect ride-along for any choice, and the Greek fries, roasted veggies and other sides are delicious. Meraki also operates a second location on Main Highway in Coconut Grove. 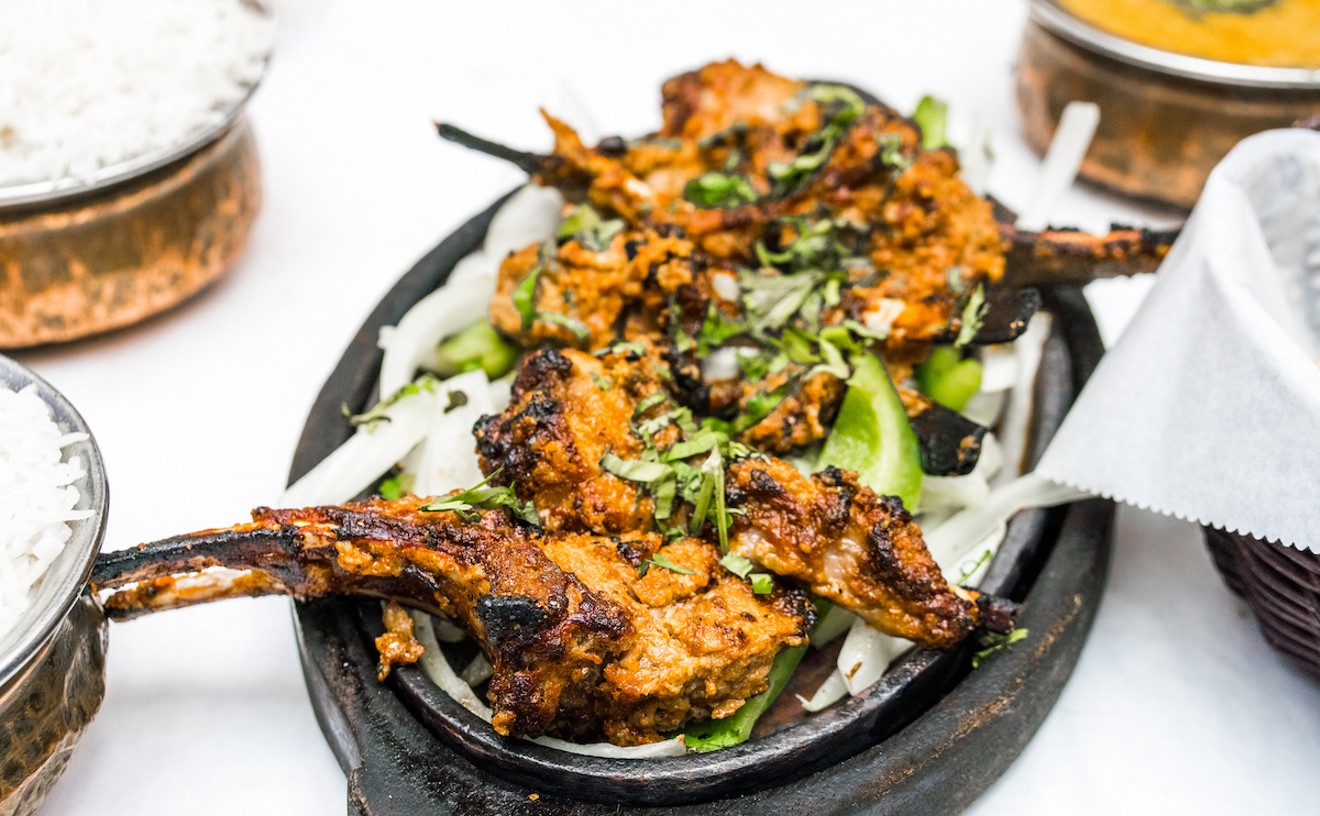 Miami is a melting pot, but it's a helluva lot easier to find a good Cuban sandwich or empanada than it is to find a decent plate of chicken tikka masala. Bombay Darbar in Coconut Grove, however, offers an authentic Indian dining experience in a luxurious atmosphere. Whether it's a traditional vegetarian dish, a spicy curry, or even a mango lassi you crave, Bombay's got it, and got it good. After years of success, the restaurant eventually relocated to a larger location to accommodate its customers. It remains a hit and a favorite among Indian food aficionados. When it comes to culinary trends, this was the year of the osteria. And none did it — or continues to do it — better than Osteria Morini. Located at the Kimpton Hotel Palomar and overlooking the Collins Canal, Morini features corporate executive chef Bill Dorrler's andchef de cuisine Julio Cesar Ramos'dishes, which stem from the Emilia-Romagna region of northern Italy. Whether you're going rustic withprosciutto and mortadella meatballs, savoring a reinvented pasta course with ricotta gnocchetti, black kale pesto, tomato conserva, and smoked ricotta salata, or indulging in ultimate sophistication with a pistachio-crusted, dry-aged duck breast with fennel, citrus celery root purée, the big flavors of Morini will stay with you — and bring you back again and again. 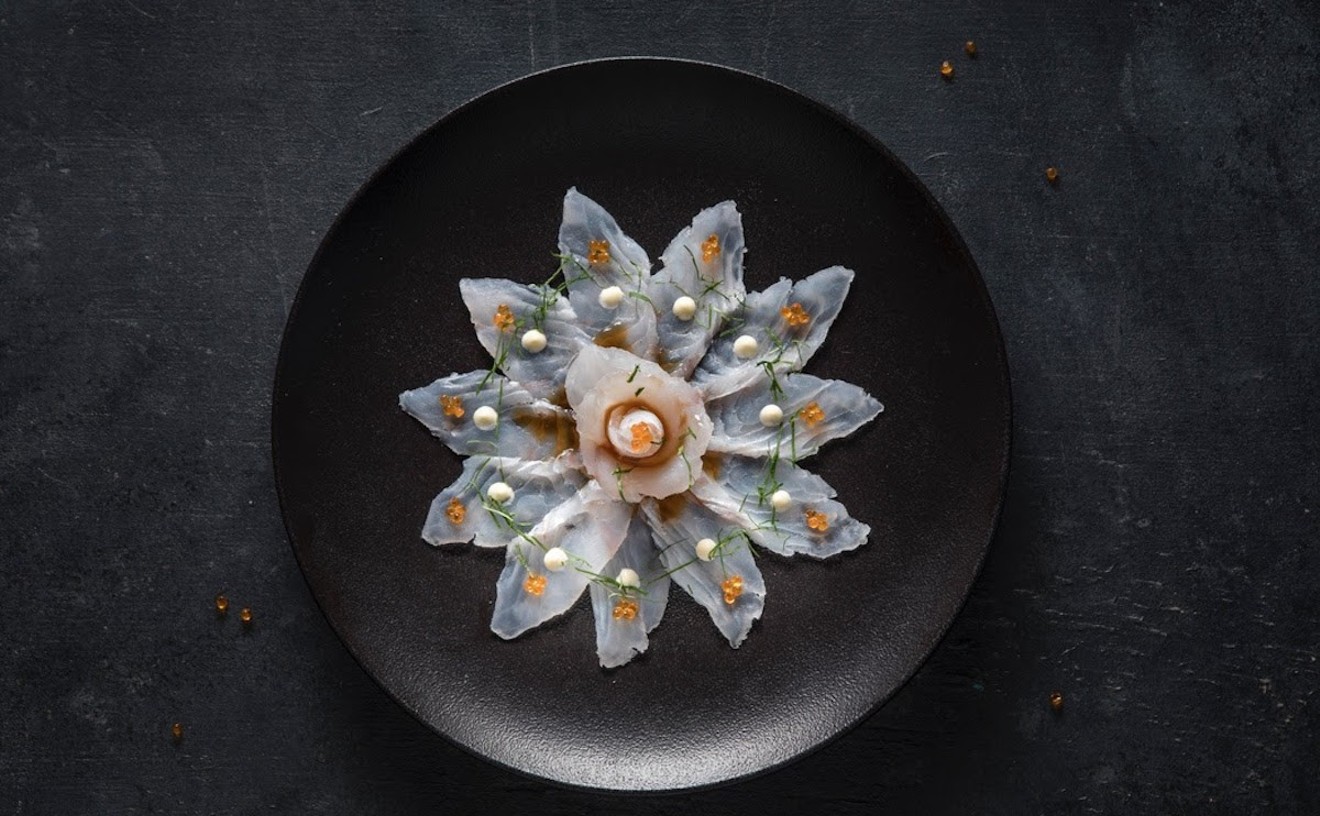 You'll know you're at Paperfish when you see the restaurant's red torii gates between the towering buildings of Brickell and South Miami Avenue. More than simple décor, these structures are said to symbolize the division between the home of the gods and the Earthbound sacred shrines they protect. Paperfish itself is a shrine of sorts to Japanese dining, from the traditional Eastern-style steam-cooked rice to the uber-fresh selection of sushi, sashimi, and nigiri. The Tokyo-inspired izakaya offers one of Miami's most authentic Nikkei experiences, highlighting the interplay of Peruvian flavors with Japanese technique, along with a touch of Florida flair. Think zensai appetizers like Wagyu bao buns accented with wasabi mayo, ebi krab salad, and chives; raw bar items such as the Nikkei ceviche, which pairs fresh tuna with crispy quinoa, watermelon, and a shoyu marinade; or tokusen entrees like the pulpo robata, which marries tender octopus and mashed edamame. 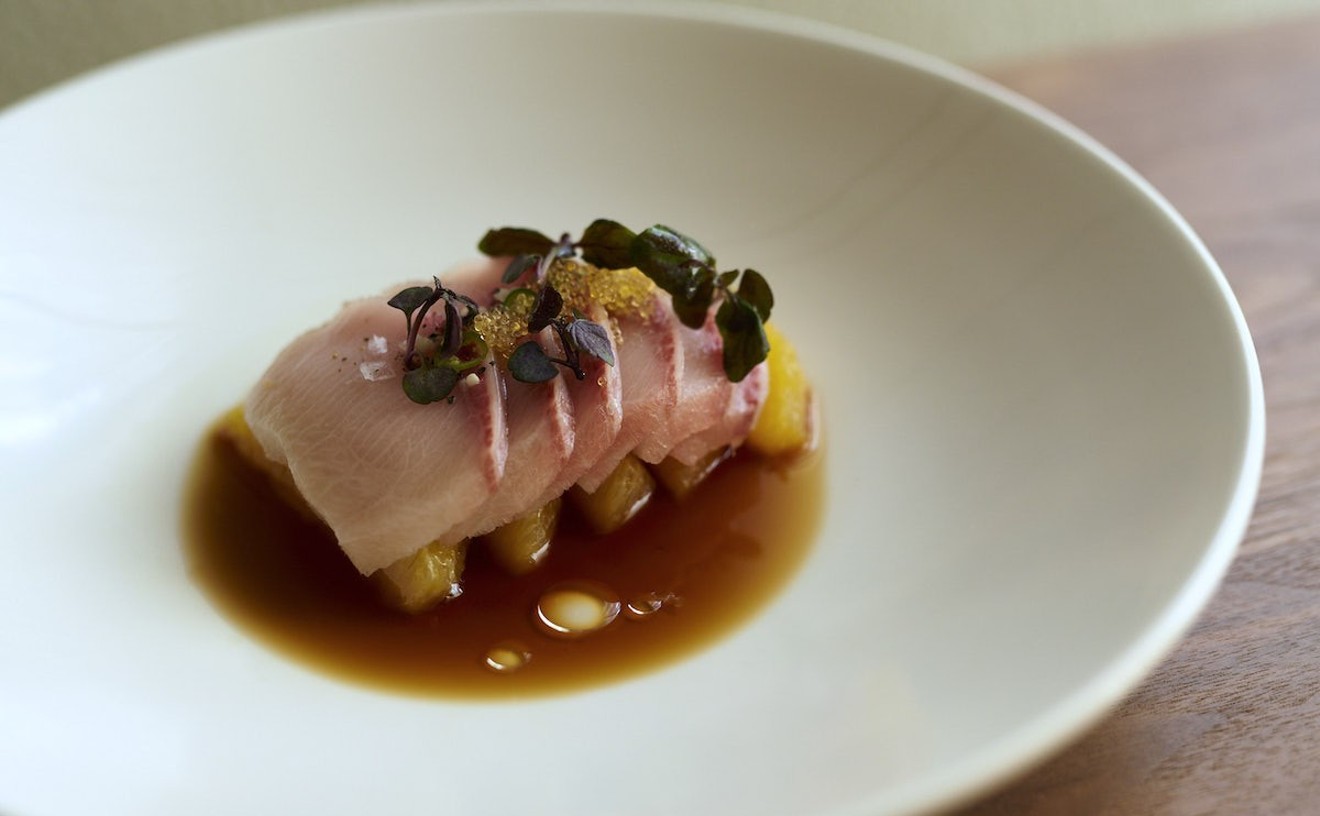 Chef/owner Tyson Cole opened the original Uchi — the name means "home" in Japanese — inside a refurbished bungalow in Austin, Texas. His goal was to create the "perfect bite" with every dish via an upscale, albeit non-traditional, approach to Japanese cuisine. At his eight-month-old Miami location, the mission remains the same. It's best demonstrated with the popular hama chili: raw yellowtail snapper, Thai chili, orange supreme wedges, ponzu, and olive oil; a single bite marries spicy, sweet and savory all at once. If you've come for the sushi, however, you're in luck. Much of the menu is dedicated to makimono (sliced sushi rolls), sushi and sashimi, and Toyosu selections — an extensive list of fresh fish flown directly from the Tokyo market of the same name. With a single sliver of kamasu (red barracuda), ebodai (butterfish), kisu (Japanese whiting), or kurodai (black bream), Cole manages to carry you off to the streets of Japan, proving that good sushi can — and should — be an exploratory experience. If you're looking to experiment further, try one of three different omakase options, a choice of six- or ten-course chef's tasting menus, or a vegan version of the same. 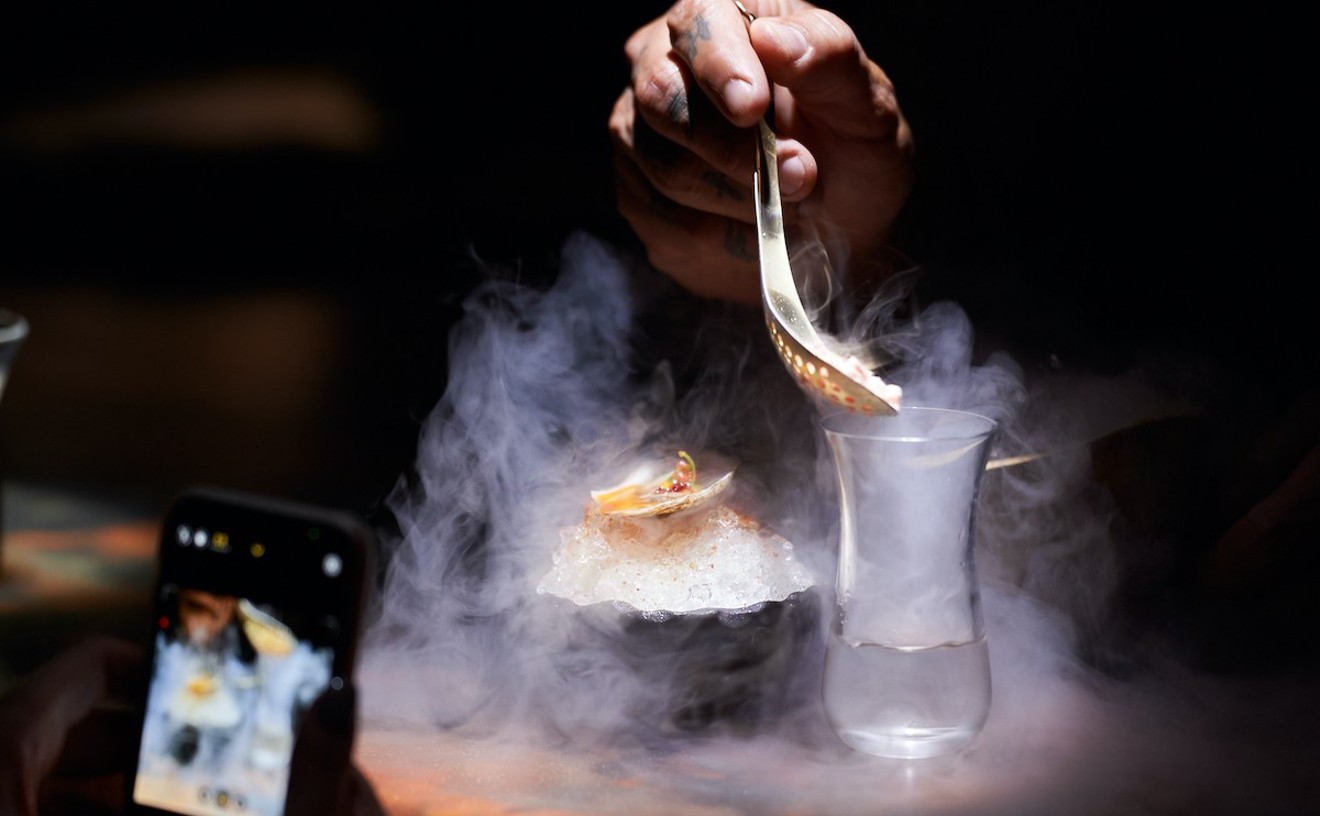 You know you've reached verifiable foodie status when the notion of leaving your $250 multi-course dinner menu in the hands of a complete stranger sounds like money well spent. Bonus if that dinner comes with a speakeasy twist. That's exactly what you'll get at Miami Beach newcomer Nossa Omakase. Discreetly located behind Koa Poke, Nossa has been thrilling diners with its reservation-only 16- to 18-course experience. Once your seating is booked, you'll receive instructions on how to access your clandestine destination, a speakeasy-themed den with only 14 seats. Inside, Japanese-Brazilian executive chef Max Kamakura will lead your multi-course journey. Kamakura is a classically trained, third-generation sushi chef, and his version of omakase touches on traditional elements while hinting at his Brazilian background and extensive travels. At the posh circular sushi bar where Kamakura holds the spotlight, every seat is the best in the house. Expect lots of smoke, some fire, and a tableside show as plates are finished before your eyes with such lavish ingredients as freshly shaved truffles, caviar, and edible gold. Menu highlights include smoking lobster sashimi, uni and black truffle-topped crispy rice, A5 Wagyu nigiri, and chutoro nigiri topped with caviar. Nossa recently debuted a monthly Wagyu and Whiskey Night, an indulgent 13-course meal highlighting the best of Miyazaki prefecture Wagyu alongside prime beef cuts aged in-house.