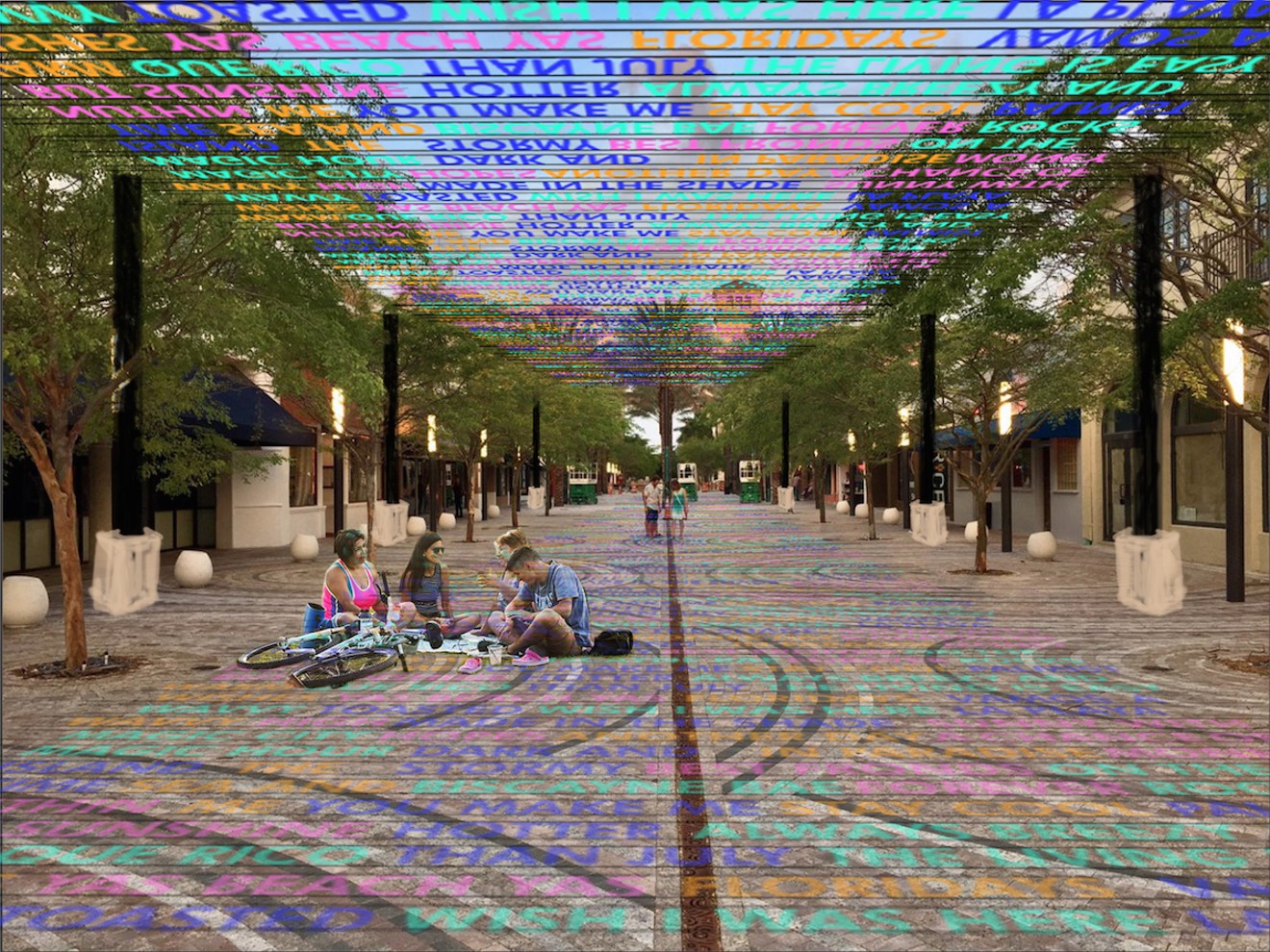 A rendering of Sun Stories, an installation by Jessy Nite set to take over Giralda Plaza in Coral Gables next week. Image courtesy of Jessy Nite
Jessy Nite's art studio, which overlooks the grassy backyard of her Little Haiti home, is flooded with sunlight. It's an apt creative space for an artist whose work often depends upon sunshine — and it's not hard to imagine her dreaming up Sun Stories, her installation that will take over Giralda Plaza later this month, inside the bright space.

"There are two parts to my work: the text and the color," Nite explains while holding a large orange capital letter F that'll be one of thousands suspended in the air above Coral Gables visitors in Sun Stories. "Oftentimes those two things don't cross." Nite's text-based works often play with shadow rather than color; for instance, she'll attach sculptures to building exteriors so they cast messages like "High hopes" and "Like paradise" on the walls in daylight. "And the large-scale public works, we've done very few in color," she adds. "To bring those two sides of my work together is exciting."

Sun Stories does just that. The project incorporates dozens of sayings into an overhead mosaic whose Plexiglas block letters cast those messages onto the ground in a rainbow of colors. When sunlight streams through the letters, visitors will be able to read phrases such as "Biscayne bae" and "Made in the shade" in brightly hued shadows on the ground. Taking over the former site of Umbrella Sky, the canopy of colorful umbrellas that filled Miami's Instagram feeds in 2018, Nite's latest project, too, is poised to go viral.

For Nite, Sun Stories is a career milestone years in the making. "Every project that I’ve been doing for the last however many years has been specifically working towards getting the opportunity to do something like this," she says. "All of my concepts are large-scale outdoor art installations, so it’s really exciting to be recognized and be able to get this opportunity."

When it comes to Sun Stories, "large-scale" is almost an understatement. Nite's letters — more than 2,000 in total — will create a canopy stretching roughly 400 feet over Giralda Plaza.

"It’s huge," she says. "It’s in an amazing location. And we’ve gotten to know Coral Gables so well." Nite took historical tours and read books by the city's founder George Merrick and writer and conservationist Marjory Stoneman Douglas to glean inspiration for the phrases. "It’s such an amazing part of Miami, and it’s so cool to get to do something there."

That melding of local culture with captivating color sets Sun Stories apart from its predecessor, says Catherine Cathers, Coral Gables' arts and culture specialist. "The umbrellas were beautiful and colorful and a sensation, yes. But [Sun Stories] has another dimension to it. It's not just about the color, but reading it, that interaction. It's going to resonate. The words will resonate with anyone who goes there."

Nite's exhibit blends the colorful appeal of Umbrella Sky with a more substantial foundation drawing on the history of Coral Gables and wider South Florida. Its phrases include not only callbacks to Nite's previous works, including Made in the Shade and Wish I Was Here, but also homages to important figures in the Gables' history and phrases in Spanish, Spanglish, and Kreyol.

"It allows people to come back repeatedly because it is such an extensive piece," Cathers says. "It's Jessy's largest work to date, and... I think it will draw people back repeatedly to enjoy the piece and find new things about it each time.

Plus, Nite says, the installation is just the launching point. "Once it’s up we, have all kinds of things planned. It going up is just the beginning."

HAPPY FATHERS DAY! To this rad dad @altbld as we work our asses off all day to install #sunstories at #giraldaplaza in @cityofcoralgables !!! And to myyyy cool Daddio who supports all the crazy stuff I do and inspires me to be a good person...love him! now back 2 werkkkkk

Nite has planned a series of activations in conjunction with Sun Stories, similar to the programming around her Stay Gold sculpture that debuted in Homestead during O, Miami Poetry Festival this year. An in-person word search, a maze based on the original streets of Coral Gables, and events in partnership with O, Miami and Dale Zine will let visitors interact with the installation on a deeper level. There's even a poem written by Nite herself hidden in the mosaic.

"I want my public artwork to extend into the community more," she explains. The activations are ways "to start the conversation."

Nite is careful to add she's not trying to present herself or her work as a representative for all of Miami. For example, she says, although she has included Spanish and Kreyol phrases in the piece, she's an English-only speaker. "So it’s tough for me to fully represent [Miami], and I don’t want to claim that I am." Still, she says, referencing South Florida's broad spectrum of culture "is important to me and important to the story of the city."

And that makes sense — after all, no one person can embody the diversity of Miami as a whole.

Sun Stories. Friday, June 21, through September 30 at Giralda Plaza, Giralda Avenue between Ponce de Leon Boulevard and Galiano Street, Coral Gables; coralgables.com. Admission is free.
KEEP MIAMI NEW TIMES FREE... Since we started Miami New Times, it has been defined as the free, independent voice of Miami, and we'd like to keep it that way. With local media under siege, it's more important than ever for us to rally support behind funding our local journalism. You can help by participating in our "I Support" program, allowing us to keep offering readers access to our incisive coverage of local news, food and culture with no paywalls.
Make a one-time donation today for as little as $1.